When Gianna Floyd accompanied her family to the White House Tuesday on the one-year anniversary of the death of her father, George Floyd, she was like any typical 7-year-old: She wanted to know, from President Joe Biden, if there were any snacks around. 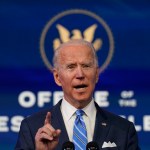 “She said, ‘I’m really hungry.’ She said to me, ‘Do you have any snacks?’ ” Biden told reporters, according to CNN. “My wife will kill me — we gave her some ice cream, she had some Cheetos, and I think she had a chocolate milk.”

Snacks aside, Gianna and her family were at the West Wing for a crucial meeting with Biden and Vice President Kamala Harris, as well as congressional leaders in Washington, D.C., to further negotiate a police reform bill.