Gabrielle Union is telling her daughter Kaavia “to love every part of herself” in a TikTok video that accentuates her genuine beauty. 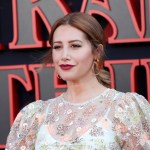 Ashley Tisdale Felt 'Ashamed' During Her Pregnancy & That Has to Stop

“We got moles!!!” the Bring It On actress captioned the video featuring her and Kaavia, 2, in a pool. “I got moles on my face,” Union tells her daughter who adorably responds, “Oh no! I [don’t] have a mole.”

“Well, I think you have a couple,” replies Union, showing Kaavia one on her foot. “But see, it’s not bothering anyone, so you just leave it…it’s a part of you,” she adds, pointing to one on her own chest.

“Yes, we got moles!” the mother and daughter exclaim with joy.

Union, who shares Kaavia with husband Dwyane Wade, a former NBA star, is also stepmother to his four children from past relationships: Zaire, 19, Zaya, 13, and Xavier, 7. Together, they also raise Wade’s nephew, Dahveon, 19.

The couple’s parenting agenda is inclusivity, best shown when daughter Zaya came out as transgender last year, as Wade explained on The Ellen DeGeneres Show. The teen had told her parents, “I think, going forward, I’m ready to live my truth…I’d love for you guys to call me Zaya.” Wade’s reaction: “I looked at her and said, ‘You’re a leader. And it’s our opportunity to allow you to be a voice.”

Union and Wade searched for family support. “I didn’t have many resources, so I just reached out to everyone I knew from social media,” Union told People. “Everyone responded with love, resources, and information.” But while online trolls have attacked the family — specifically in a 2019 Thanksgiving family portrait featuring Zaya with painted nails — the teen knows who she is. “I know it can get tough, definitely, but I think you push through and you be the best you,” she explained to her dad in a February 2020 viral video.

And this past February, Union defended Kaavia when critics claimed the tot’s hair “is never done.” As Union told MadameNoir, “…It’s not going to be picture perfect or whatever people feel that means. I’m human. I see comments where they’re like, ‘That child’s hair is never done.’ And it is done, I just don’t chase her around making sure that we document her looking super, super done every single day.” What you said, mama!