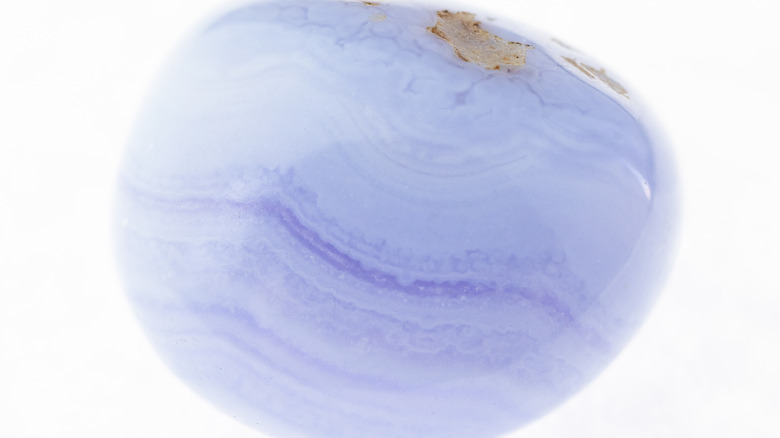 One of the many charms of crystals is the variety of colors in which they form. They span the entire rainbow in color, and their shades can vary so much that no two stones are the same. Plus, like paint, they can have different “finishes,” with some crystals being shinier and others more matte. You’ve got peridot, for example, that’s a brilliant green, and then there’s pyrite with its golden hues. On the blue side of the spectrum, there’s lapis lazuli, but there’s also blue lace agate.

Blue lace agate is, like its name implies, a blue crystal, but it’s a muted blue. It’s pale in color, but it’s powerful nonetheless. According to Charms of Light, blue lace agate is a “banded agate variety of chalcedony,” and it’s associated with the zodiac sign Pisces, the planet Neptune, the number 5, and the water and air elements. While it can be found around the world, blue lace agate was first discovered in the African country Namibia, per Truly Experiences. Since then, deposits of it have been found in Brazil, China, India, South Africa, and even throughout the United States, though the bulk of blue lace agate is still mined in Namibia.

Something that makes blue lace agate especially interesting is that it’s naturally blue, unlike lapis lazuli which is dyed blue (via Cape Cod Crystals). A naturally occurring process called Rayleigh scattering — the same reason the sky is blue — turns these stones blue, and because it’s a molecular process, the blue color of a blue lace agate will never fade, unlike dyed stones like lapis lazuli. 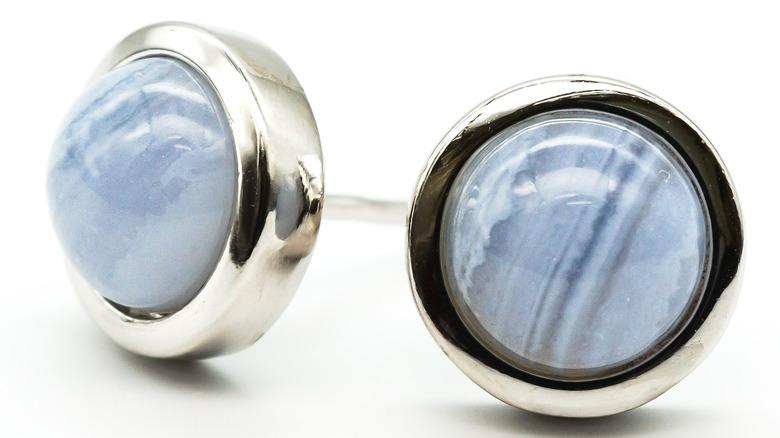 When it comes to using blue lace agate, you should know a few things. First, according to Charms of Light, this stone is a cooling and calming crystal, like its paler color suggests. It provides its user with a sense of tranquility, and it furthermore heals your throat and voice. This crystal wants you to be able to express yourself, your emotions, and your thoughts, and you can’t do that with a damaged throat.

Moreover, Crystal Vaults notes that blue lace agate is a maturing stone. It helps invoke your self-confidence and your maturity, and it helps bring security to your life. This could be emotional security or physical security (financial security and other forms of security belong to other stones). Because of its properties, this crystal is particularly useful during pregnancy. It can help your emotions through the entire process, helping your nerves and your overall feelings of security during and after.

Blue lace agate is a gem that everyone needs in their collection because of its various calming effects. If you have a bad day, are going through something challenging, or just need a pick me up, this stone’s powers can have you back on your feet and feeling better in no time.