When Anderson Cooper’s son Wyatt wakes up, he does the sweetest thing. Before he brushes his teeth or gets dressed or asks about breakfast, he just wants to go see his baby brother, Sebastian. The CNN anchor gushed about the sweet morning routine, and our hearts are melting!

“I wake up Wyatt first, and then he wants to come with me to wake up Sebastian, and he likes to get into Sebastian’s crib,” Cooper said on The Late Show with Stephen Colbert on Wednesday. “He has this thing now, I don’t know where it came from, where he’s like, ‘I want to smell Sebastian, I want to smell the baby.’ And I say, ‘Smell the baby.’”

Aww! He’s soaking up that newborn baby’s smell, and we can totally relate. Cooper continued, “And he smells the baby’s head. And every time he says the same thing, which is, ‘He smells like an angel,’ and I’m like, ‘Are you from a Christmas special?’”

The love between the two brothers is already so real, it’s adorable. Colbert thought so too, responding, “Get that kid over to Hallmark!”

The All There Is podcast host also said that things with two kids are “going great,” which he was “very concerned about.” He also joked about being “attacked” from people after the last time he was on The Late Show after telling a story about him and Wyatt making fun of Sebastian when he cries.

“I’ve started doing this thing with Wyatt where we both sort of make fun of Sebastian,” he said during the episode in April. “I mean, not in a bad way.” He clarified, “When Sebastian’s crying, Wyatt will look at me, and I’ll look at him, and I’ll go, ‘Wah! I’m a baby. I’m crying, I’m crying,’” he said, using a baby voice. 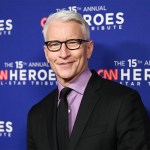 “You guys have a common enemy. That’s what it is,” Colbert joked, adding, “You’re going to stop this before the child understands English, right?” and Cooper responded, “Of course I’m going to stop it.”

At least the lighthearted joking about Sebastian didn’t seem to have any lasting impact on Wyatt, since the 2-year-old is obviously so in love with his sweet angel brother.

It’s nice to see Wyatt and Sebastian’s relationship growing closer (and more adorable!) by the day.

These celebrity LGBTQ+ families are proving that love is love.