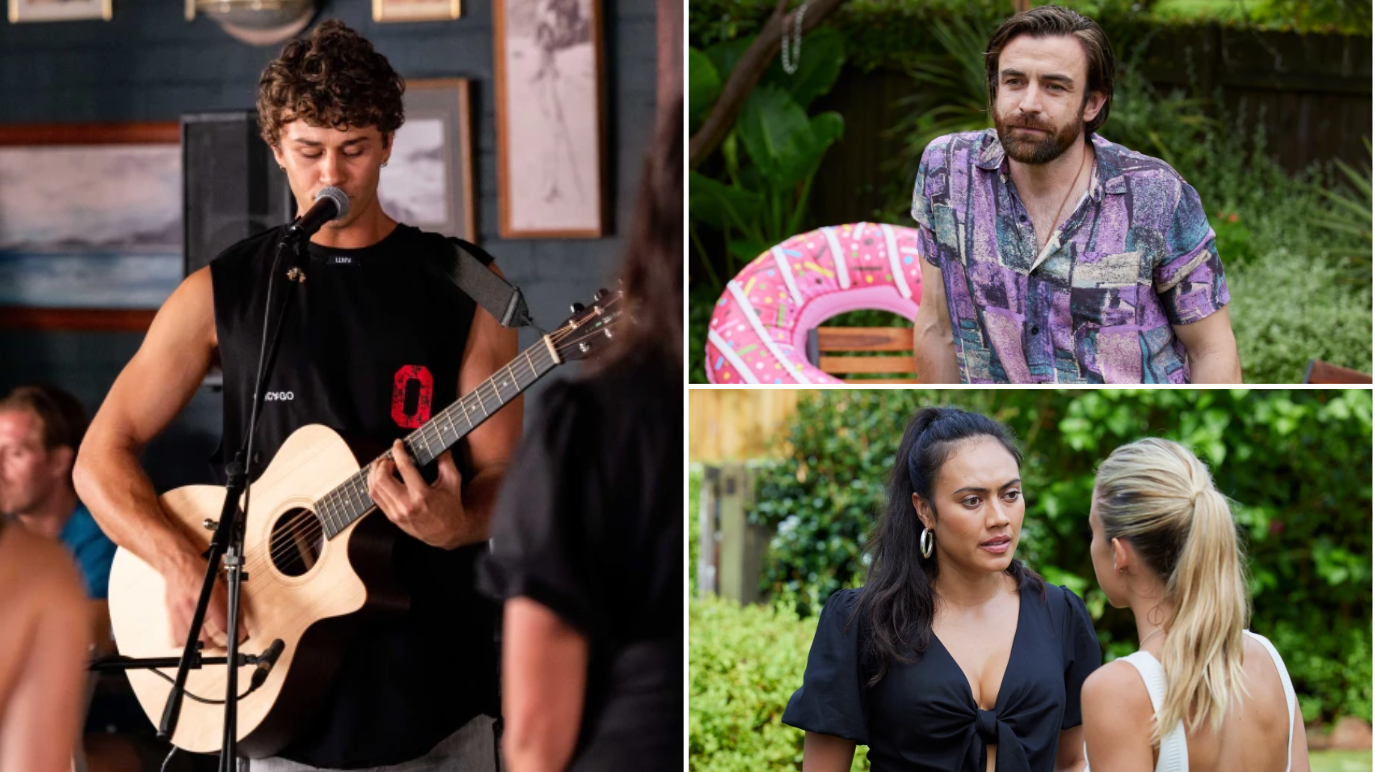 This week on Home and Away, Lyrik manages to bring out some of the worst performers in the Bay as they hold auditions in Salt for their replacement lead singer. They’re about to give up hope when a surprise latecomer grabs Remi’s (Adam

Rowland) guitar and begins singing…he’s good, but will it be enough to win Lyrik over?

Meanwhile, Chloe’s (Sam Barrett) world is turned upside down when Nikau (Kawakawa Fox-Reo) and Tane (Ethan Browne) smuggle her to a motel and tell her she’s in danger. Her relationship with Theo (Ethan Browne) and her job at the Gym is all going to disappear as she has to go to New Zealand immediately for her own safety. Overwhelmed, Chloe locks herself in the bathroom – will she get on the plane or stay put?

Here’s what’s coming up for the week beginning Monday August 29.

Theo takes a big gamble with a surprise audition

As Lyrik comes to terms with the fact their lead singer has walked out on them, they realise they have to find a replacement – and fast. Later, Mackenzie is shocked to see flyers advertising band auditions in Salt. To make matters worse, once the ‘talent’ starts rolling it to try their luck, it becomes clear the worst musicians in the Bay have put themselves on display! The band soon gives up and starts packing their equipment away. However, Theo shows up in the final hour and begs to be given a shot. The band refuses…but Theo picks up Remi’s guitar and starts playing. The band looks on, outraged – but pleasantly surprised by what they hear. Will Theo’s gamble pay off?

Chloe is told she has to move to New Zealand immediately

Tane has recently been dealt a fresh blow by the bikies – instead of pressuring him into returning the money Ari stole, with interest, they want to use the Gym as a base for their money laundering business. Tane tries to refuse, offering the gang a higher sum instead, but Tex plays hardball and tells him Chloe will come to harm if he doesn’t cooperate. Tane and Nikau realise they have to take drastic action, smuggling a terrified Chloe to a nearby motel. She’s told that she’s in danger and they’re packing her belongings so she can board a plane to New Zealand imminently. However, Chloe is overwhelmed and locks herself in the bathroom. Will she comply with the life-changing turn of events, or will she place herself in danger?

Nikau breaks up with Bella over the phone in heartbreaking scenes

As Chloe is told she has to leave the Bay and stay with Mia in New Zealand for a while, the reality dawns on Nikau – saying goodbye to her will be hard, but an even harder goodbye has to be on the horizon if he wants to keep everyone he loves out of danger. That evening, he steels himself in his room and picks up his phone to dial Bella’s number. She answers from an apartment in New York and happily tells him that she’ll be able to head home soon. However, Nikau tells her not to bother – they’re over. Bella is left reeling, confused and heartbroken – is he honestly breaking up with her over the phone? Nikau tells her not to get in touch again, as he won’t reply. Bella is left heartbroken and alone in New York…what does the future hold for her now?

Rose begins a secret investigation into her boyfriend

Rose has been enjoying her time with Tex, and she’s happy to finally have an evening alone with him in Salt. She questions where he’s been, but Tex turns on the charm to distract her. However, his phone keeps going off – Marty is trying to find Chloe. Eventually, Tex has to excuse himself, and Rose becomes suspicious – especially when he doesn’t show up to work as he promised he would. She begins researching him online, and discovers he has no presence. Something isn’t adding up…

Xander has recently gone off the rails towards a drunk driver after a cyclist passed away during a collision. Shocked to see his inability to control himself, Rose and Cash decide to keep an eye on him. However, Xander isn’t pleased to see Cash babysitting him, and confronts Rose – why has she told people his private business? Irene sees the tension between the siblings and invites them over to dinner. But during the meal, Irene asks Xander how work is going and he immediately concludes that Rose has told her everything too. He stands up in a rage and says that perhaps Rose should share her secrets too – like being in love with her sister’s boyfriend! Irene and Cash look on in shock as Xander storms away and a humiliated Rose runs after him…

Eden has a saucy suggestion for Jasmine and Cash

Cash has recently been left reeling after walking into Salt to see Lyrik on stage – not to mention his old flame, Eden, who launches herself off the stage towards him. They decide to leave their history in the past and be friends – but there are more surprises in store when Eden runs into Cash on the beach and invites him to their next gig. He puts up walls and says he will be busy with Jasmine as she’s returning to the Bay. Undeterred, a cheeky Eden suggests that three isn’t always a crowd. What will Cash make of her offer?

Will Lyrik put down roots with a new house?

John has been left outraged by Lyrik’s constant noise next door as they crash at the Parata’s place. However, he is soon distracted by good news – the hippies on his other side have put their house up for lease! Once they’ve gone, all he has to do is get rid of the band and he’ll finally have peace and quiet. However, John may not get what he wants as Eden notices the ‘for lease’ sign and immediately asks respectable policeman Cash for a reference. Will the band be putting down roots in the Bay?

After Xander’s outburst at dinner, he decides to approach Cash and apologise. The two men patch up their differences, and Cash decides to continue the shared honesty by revealing his plans for Jasmine’s return. He pulls out a ring box from his pocket – there’s a stunning diamond inside. Is Jasmine ready for the proposal that awaits?