Michael Strahan shared a peek inside a previously unseen part of his stunning New York home on Monday – and it’s not what we were expecting.

The Good Morning America star lives on the Upper West Side in an impeccable apartment and has often posted videos from his living room, kitchen, and his bedroom. But now he’s given fans a glimpse inside his home office and it looks completely different from the rest of his home.

Michael posted a video on Instagram from his office and it looks relatively bare compared to the other heavily furnished rooms in his abode.

The walls are painted white with light-colored wood flooring and there is a small white desk in the background which is home to his Apple PC and other office supplies. In one corner alcove sits a wooden cabinet adorned with trinkets, and there is a gray chair with wooden legs facing his desk.

There also appears to be a glass partition in the center of the room, which looks like it separates his office from another space but helps to keep an open plan and spacious aesthetic.

Michael’s office is unlike the rest of his home

Michael is sitting in a tan-colored swivel chair, and he also has a matching couch as seen in a previous photo. The former NFL star used to own a 15,600-square-foot mansion in California before he moved to the East Coast.

While New York is associated with small apartments lacking outdoor space, the star is lucky enough to have plenty of room and a cute backyard!

His open-plan living room has floor-to-ceiling windows, a large sofa, a flatscreen television, and various pieces of artwork mounted upon the walls. 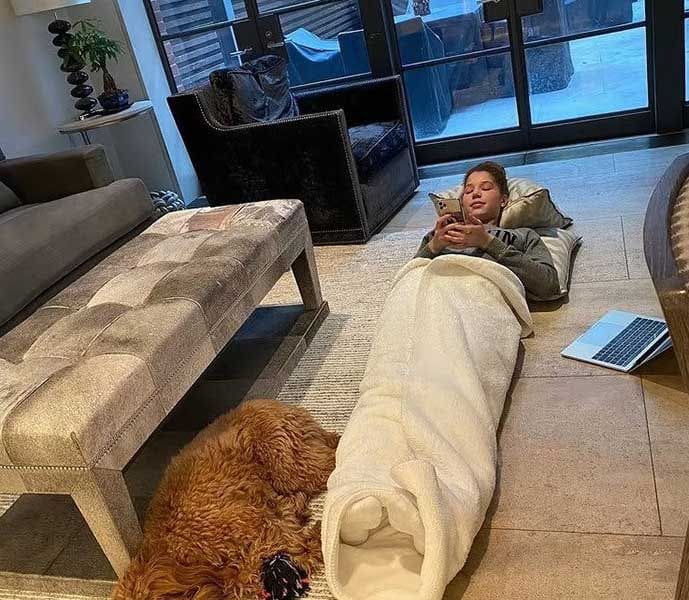 It is furnished with a cream rug, a gray button-back footstool, a gray brushed velvet armchair with studded arms, and another gray settee. The room is separated from his kitchen via an island with a white worktop.

Michael’s kitchen is designed with off-white cupboards and white marble worktops and backsplash panels. He also has a glass bubble pendant light and a silver hob with a matching cooker hood.

Unlike most New Yorkers, Michael is lucky enough to have his own outdoor space – a small terraced area lined with a brown fence and a tall bush at the far end which he can access through French double doors.