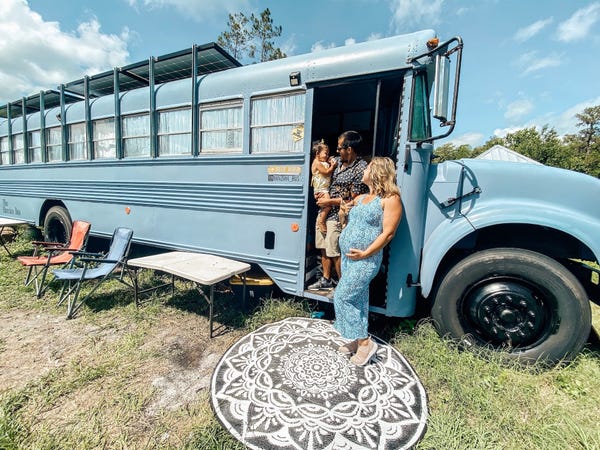 As the tiny house movement continues to grow, families are choosing to downsize and live in converted school buses.

Known as schoolies, these vehicles have everything a tiny house would have: kitchens, bedrooms, bathrooms, and most importantly, mobility. Instead of buying the traditional family home, couples with babies, toddlers, and even teenagers are turning to schoolies to make their tiny house dreams a reality.

Here are some beautiful photos of schoolies that will have you daydreaming of a life on the road with your family.

Will and Kristin travel the US year-round in their 180-square-foot converted bus with their daughter and dog. 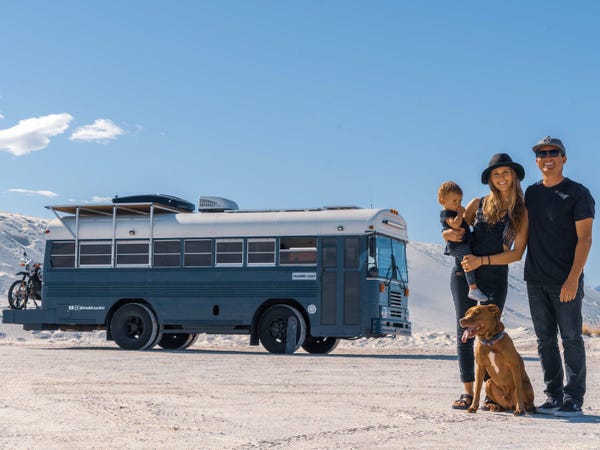 The couple bought the bus in 2016 after a documentary on minimalism made them want to embrace a nomadic lifestyle.

"Experiencing all those new places is the main reason why we wanted to do this, because we love to travel," Kristin told Insider.

They finished the bus in 2018, which was the same year their daughter, Roam, was born. They've been traveling as a family ever since.

The kitchen sits at the front of the bus, just behind the driver's seat. 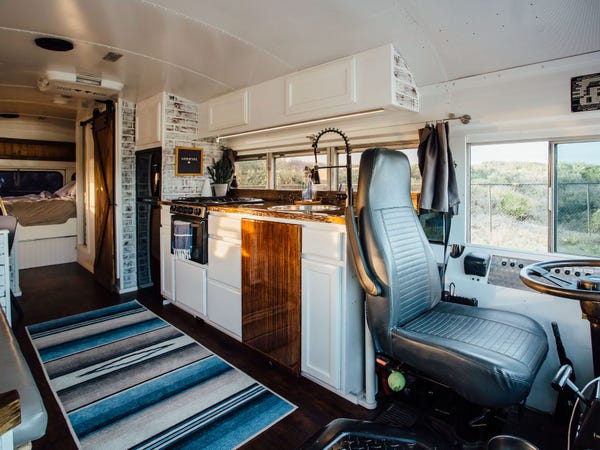 Although it's small, the kitchen has a fridge, stove, and oven, as well as a farmhouse sink.

The driver's seat doubles as Kristin's workspace, as she has an insert that fits over the dashboard to turn it into an office.

The living room couch doubles as safe seating when they're on the go. 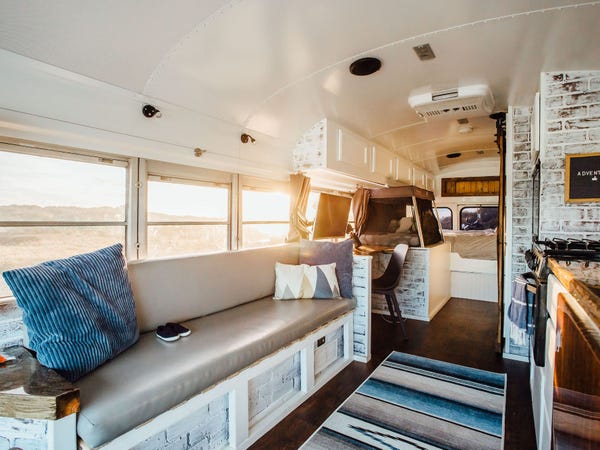 The couch has seat belts built into it, and it also folds out into a double bed for guests.

The couple's bedroom is tucked into the back of the bus, as is their daughter's bassinet. 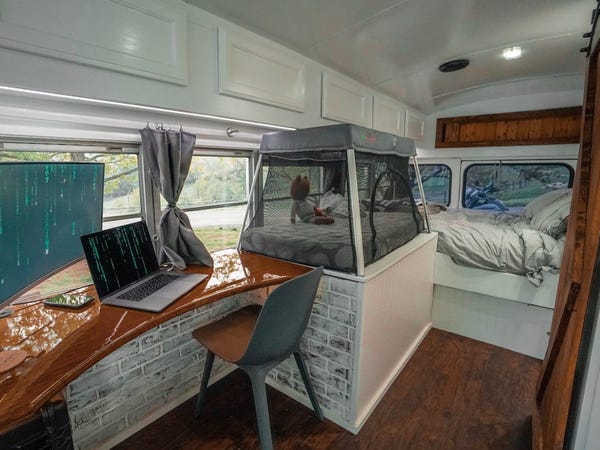 They made Roam's bed using a pack n' play and a baby mattress, giving her a space of her own. The closet and bathroom sit across from her bed.

Will's office space is on the other side of her bed, and it features a second screen the family uses as a television.

Will also built a retractable rail into the side of the bus so he can skateboard. 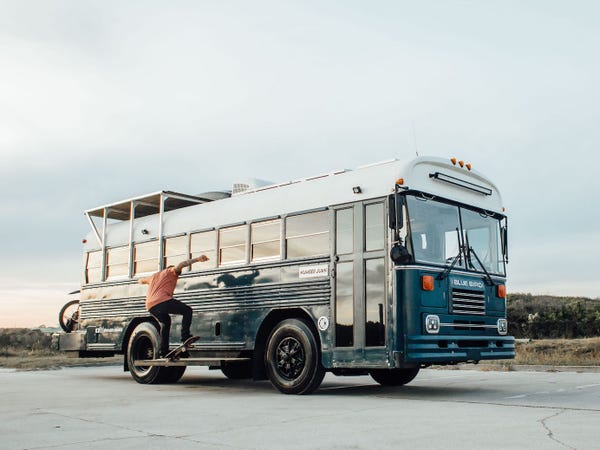 "I think there's a lot of stigma that it's hard or impossible to raise a kid in a small space like this," Kristin said of her family's lifestyle. "But we spend so much time outdoors that we don't really ever feel like we're trapped in a small place with a kid."

Ian and Hannah Hernandez transformed a school bus into a permanent home for their family of four. 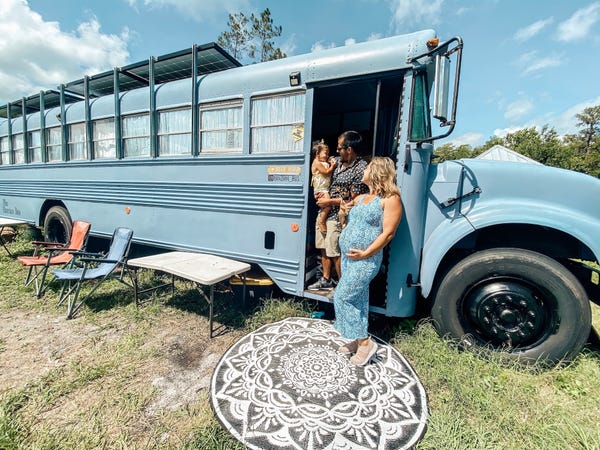 The appeal of financial freedom led the Hernandez family to life on the road. "We knew we wanted to own something, but we also knew that we wouldn't qualify for a house," Hannah told Insider.

They've been living in the colorful 1991 school bus full time since 2018. Today, they share the 187-square-foot space with their toddler, infant, and dog.

The Hernadez family filled their small space with color. 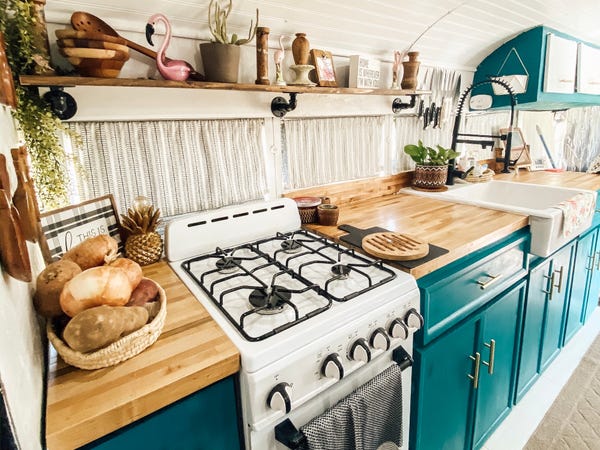 They prioritized the kitchen when they renovated the bus, building butcher block countertops and a farmhouse sink into the space. It has a refrigerator, a stove, and an oven. The sink also serves as a bathtub for the kids and the dog.

"I just like how versatile it is," Hannah said. "In a tiny home, it's great to have multiple uses for one item."

Despite the small size of the bus, the Hernandezes were able to build two nursery areas for their kids. 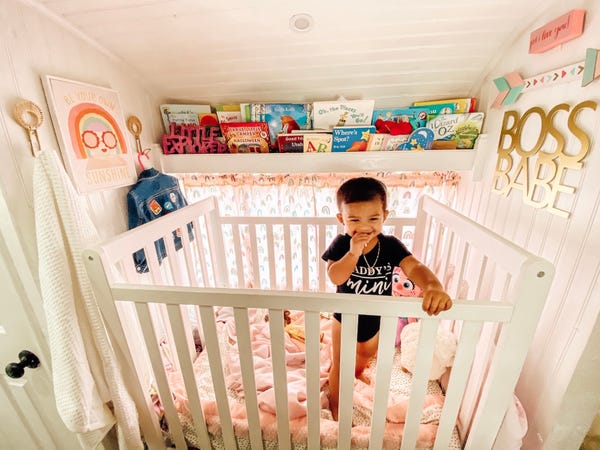 Their toddler has a full-size crib, while their infant sleeps in a hanging bassinet. There's space for a second crib when the baby outgrows the bassinet.

Hannah and Ian's bed sits behind the nursery, and it lifts up for additional storage. 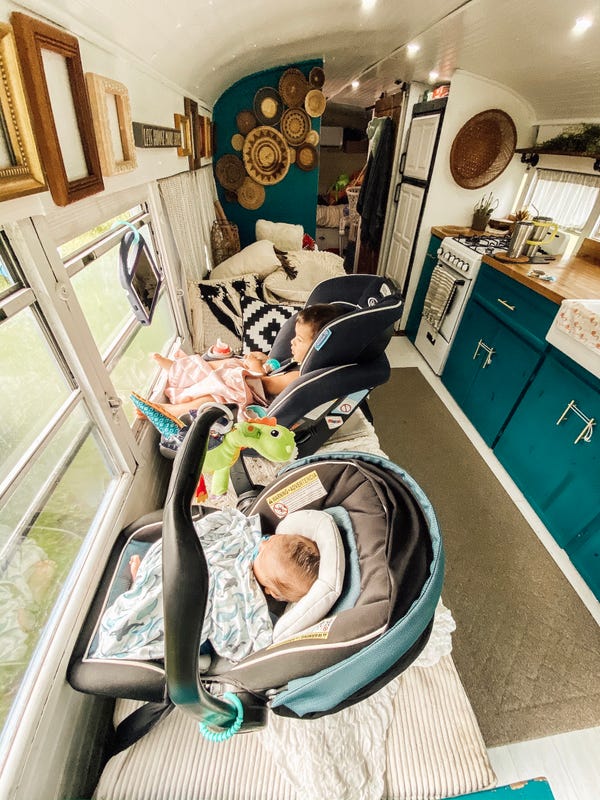 The couch pulls out into a bed, has built-in storage space, and the kids' car seats strap into it when the Hernandez family is on the move.

Hannah also told Insider they have to remove much of their decor when they're driving, as it would fall down. They buy most of their decor at thrift stores.

"We get to see that the kids love it," Hannah told Insider of her children's attitude towards bus life. 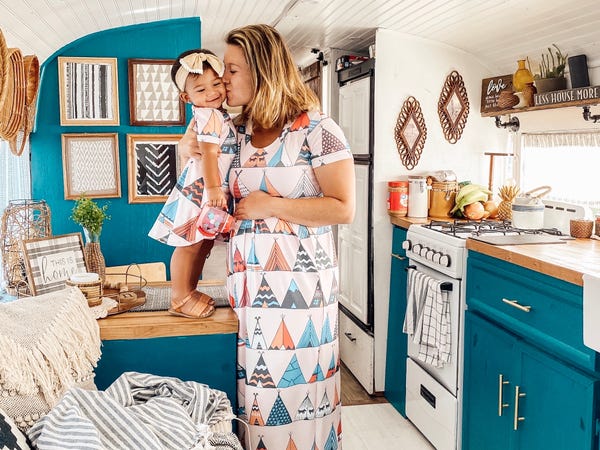 All of their toys are within arm's reach, and they get to go on adventures most children don't.

"I think it's really cool that we get to be able to take her to all these places that some kids don't ever get to experience or don't experience until they're old enough to take themselves," Hannah said.

Marte Snorresdotter Rovik and Jed Harris travel around Australia with their two kids in a converted school bus. 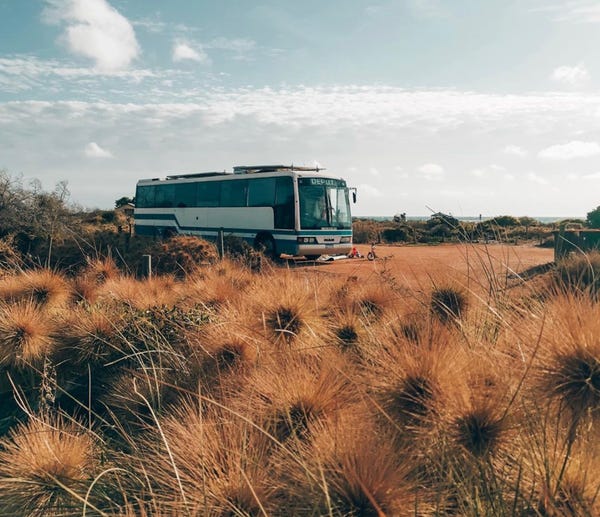 When Rovik and Harris were expecting their second daughter, they knew they wanted a complete lifestyle change.

"Rather than trying to make more money, we started looking at how we could need less money," Rovik told Insider.

At the front of the bus, the open space includes a cozy living room and a quaint kitchen. 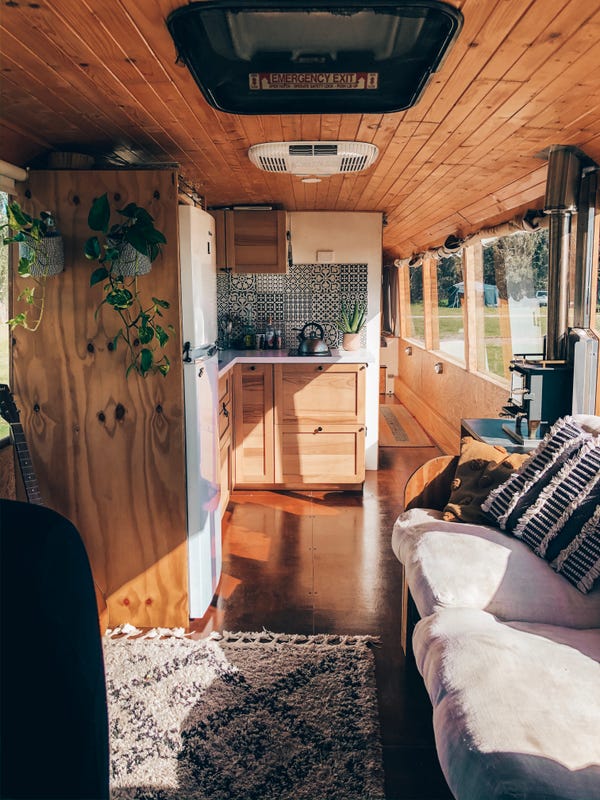 "Most of all, we love our big windows running all through the bus and providing us with ever-changing, beautiful views," Rovik said.

The kitchen has a full-size fridge with a freezer, a sink, and a stovetop. 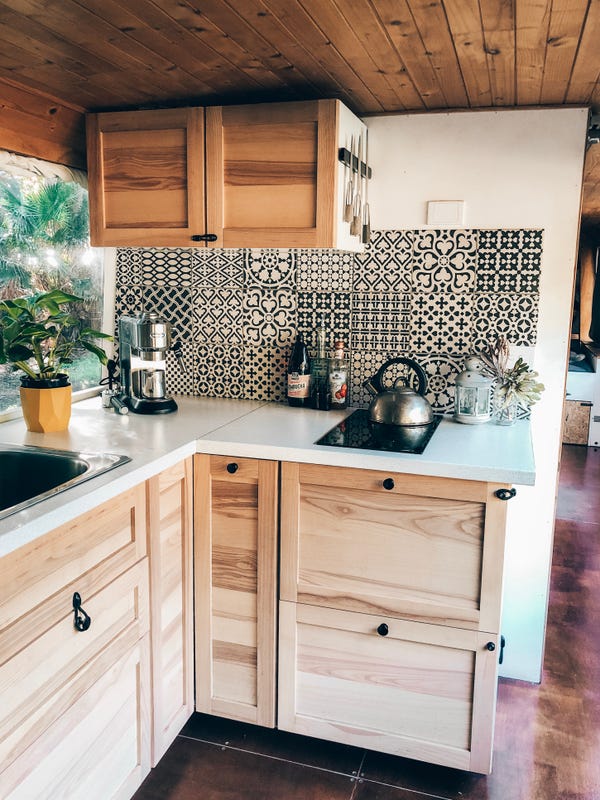 Although the kitchen is simple, Rovik said it's the perfect size for the family of four.

The children's bedroom is cleverly designed for maximum space. 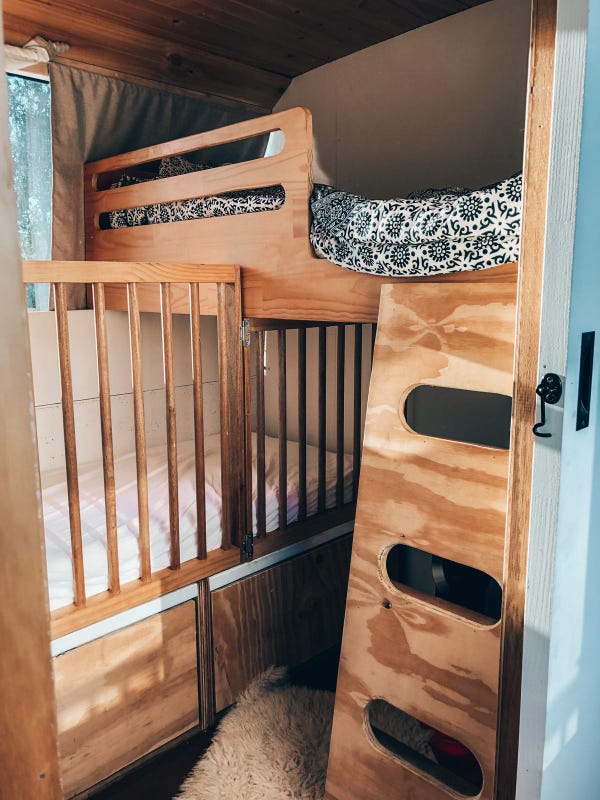 The bottom bunk is for the couple's younger daughter, while the top bunk is reserved for the oldest. The floor next to the beds is used as a play area for the children, Rovik said.

The family treks across Australia, stopping at scenic overlooks along the way. 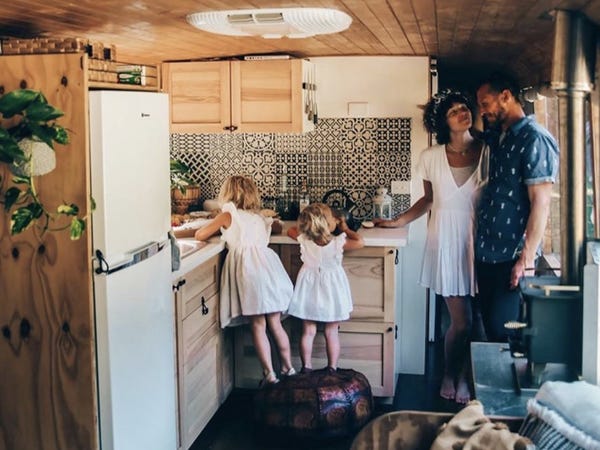 "The freedom is by far the best part," Rovik said. "Our much-beloved home is mortgage-free. We have no bills, all the time in the world, and the freedom to live wherever we want."

Mike and Tawny McVay live in a converted school bus with their two teenagers and 130-pound dog. 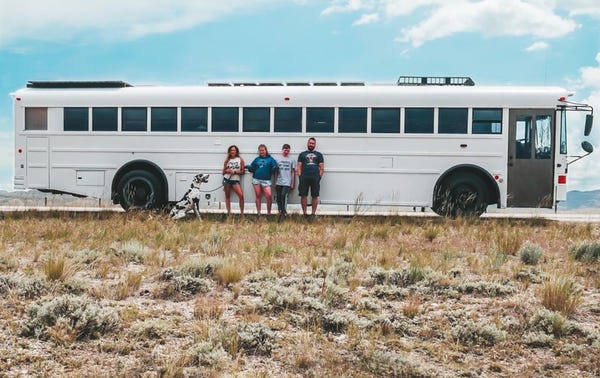 After dreaming of an unconventional lifestyle, the McVays took their two teenagers, Aidyn, 15, and Ellery, 14, out of school to embark on an unusual journey.

The open living room doubles as Aidyn and Ellery's bedroom. 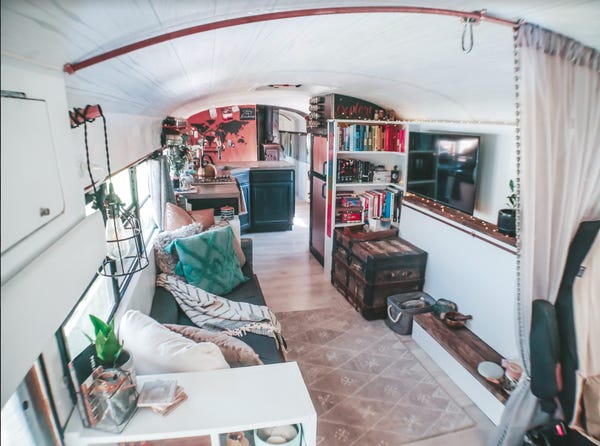 The living room has a couch and a fold-out bed that the teenagers can sleep on when traveling. The two are also homeschooled on the bus.

"It hasn't always been easy or fun, and there have definitely been times where we wanted to kill each other, but in the end, it's been an amazing experience," Aidyn said.

The teens can also do their schoolwork in the L-shaped kitchen. 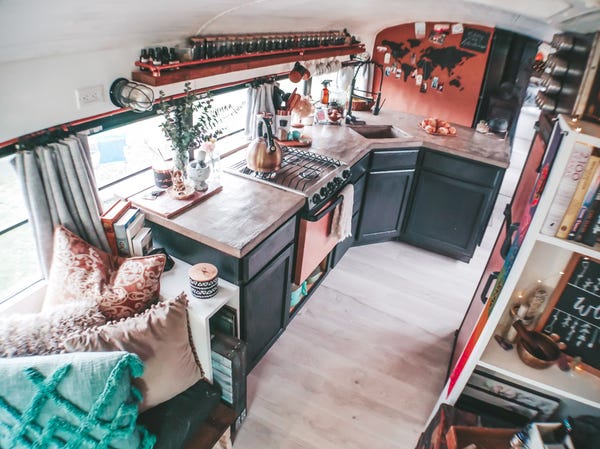 The kitchen has concrete countertops, a stove, a pantry, and a fridge.

Tawny and Mike's master bedroom is located in the back of the bus and has plenty of storage space. 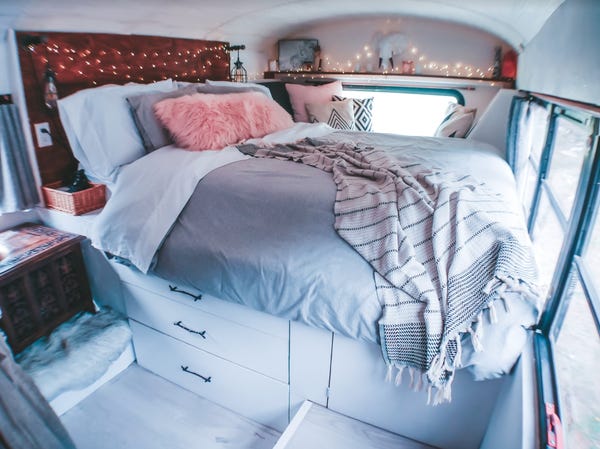 Putting the bed on a platform helped maximize the small space for storage.

As a family, the McVays have traveled to Washington, Oregon, Idaho, and Wyoming in their schoolie. 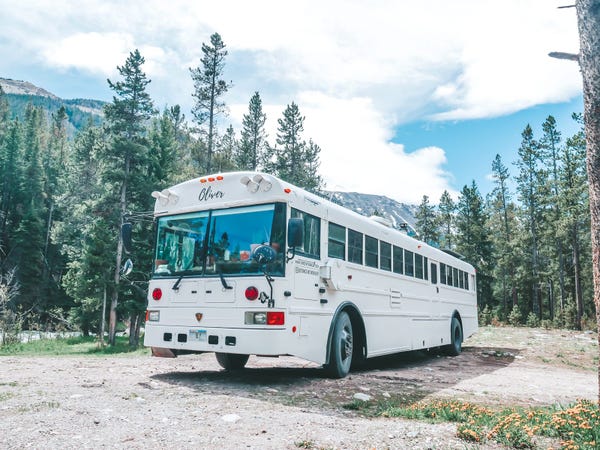 "I think the biggest thing we all learned, both individually and as a family, is that we have to roll with the punches and support each other," Tawny said.