The 64-year-old actress recently opened up about her journey battling a large, painful fibroid tumor, which were initially misdiagnosed by her doctor.

“Just had another misdiagnosis and incorrect procedure. This time double epidural,” Stone tweeted earlier this week. “[With] worsening pain went for a SECOND OPINION: I have a large fibroid tumor that must come out.”

“Ladies in particular: Don’t get blown off,” she added. “GET A SECOND OPINION. It can save your life.”

According to Mayo Clinic, fibroid tumors, a.k.a. uterine fibroids, are noncancerous growths in the tissue of the uterus. Although they are benign, these growths are associated with a number of disconcerting symptoms, including pelvic pain or pressure, heavy menstrual bleeding, frequent urination, and fertility problems. They affect 70 percent of white women and more than 80 percent of African-American women by the age of 50. 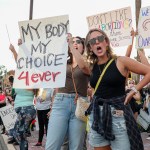 It’s not Stone’s first run-in with a serious health issue. In her memoir, the Basic Instinct star previously revealed that she had surgery in the 1990s to remove breast tumors and suffered a stroke in 2001. Additionally, Stone opened up this June about enduring nine miscarriages over the course of her life.

Stone isn’t the only celebrity to openly discuss her nerve-wracking experience with uterine fibroids, either. Back in 2018, singer-songwriter FKA Twigs said she had six fibroid tumors removed in one surgery. The weight and size of her tumors were proportionate to being six months pregnant.

“I tried to be brave but it was excruciating at times, and to be honest I started to doubt if my body would ever feel the same again,” she shared. “I had surgery in December and I was so scared, despite lots of love from friends and family I felt really alone, and my confidence as a woman was knocked.”

It bears repeating: Uterine fibroids are very common, so if you’re experiencing symptoms, contact your gynecologist. There’s no reason to suffer from pelvic pain or heavy periods.

Before you go, check out all the best period products we’re totally obsessed with: