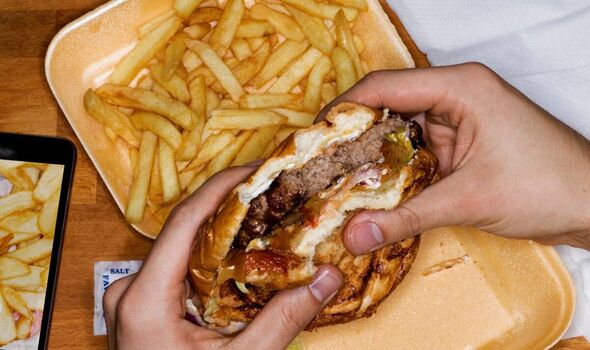 In just 17 years four in 10 of the UK population will be overweight, massively increasing their chances of being struck with cancer. Health chiefs blamed the growing crisis on repeated missed opportunities to act which, they said, proved the carrot had not worked and it was time to use the stick.

Michelle Mitchell, Chief Executive of Cancer Research UK, said: “This is not the time to be delaying the roll-out of a 9pm watershed on TV adverts of junk food, which the Government’s own figures show could reduce the number of children with obesity by more than 20,000.

“Not only does it put the interests of companies above the health and wellbeing of young people, but it flies in the face of the ambition to halve childhood obesity by 2030.

“These advertising restrictions have already been more than two years in the making and most of the UK’s biggest food brands could quite easily switch to marketing healthier options right now if they were made to. The carrot approach has not – and will not – work. It’s time for the stick.”

In July 2020, as part of its tackling obesity strategy, ministers announced plans to slap a 9pm watershed on TV advertising for products high in fat, salt, and sugar.

This move has now been delayed until October 2025, after the General Election, despite the chronic UK-wide health epidemic.

Part of the reason, although not officially stated, is the cost of living emergency gripping Britain with industrially-manufactured and processed foods nearly always cheaper and more convenient.

But health campaigners argue delays on acting to legislate will see the NHS crippled with the fallout. Three of the five cancers with the biggest rises in death rates over the past 20 years – liver, womb, and kidney – are linked to obesity.

Some 41 percent of 10 and 11-year-olds are overweight or obese as the temptation of junk food proves irresistible. Fat youngsters are five times more likely to remain so in adulthood.

One in 20 cancer cases is caused by excess weight with fat linked to 13 different types of the killer disease.

The Government’s own analysis shows a roll-out of TV advertising ban on junk food could reduce the number of children with obesity by more than 20,000.

The England football team, which reached the quarter-finals of the World Cup last month and whose players are idolised by millions of children, trousers eye-watering amounts of money in sponsorship from a string of corporate giants including Snickers, Lucozade, and Coca-Cola.

And on Monday doughnut maker Krispy Kreme embarked on a new and aggressive UK marketing campaign in which it urged people to “kickstart January”, encouraging people to buy sugar-laden products to “brighten up treat time”, adding: “It’s easy to say yes.”

The mounting crisis comes as cancer waiting targets are routinely missed every month and the UK lags behind comparable countries when it comes to survival rates.

Tam Fry, Chairman of the National Obesity Forum, said: “We will demand [Chancellor Jeremy Hunt] finds the money to implement a proper obesity strategy. In the years he was Health Secretary he did next to nothing to combat obesity. From 2016 he promised draconian measures but delivered none of them.

He told me he had tried – but obviously didn’t try hard enough. Now he can deliver on his most recent demand, as Chair of the Commons Health Select Committee, that [former Prime Minister Boris Johnson’s] 2020 obesity plan – which was only an attempt to roll back obesity – is reinstated immediately. But it has to be more comprehensive.”

CRUK wants the Government to restrict the marketing and promotion of junk food and drink, and has called for the governments of Scotland, Wales and Northern Ireland to embrace similar measures.

It wants Ofcom to undertake an annual review to monitor the use and impact of different and emerging types of advertising – including brands’ own social media – and ban the use of influential promotional techniques like cartoons, characters and influencers.

Such is the depth and scale of the crisis it also wants the creation of a Cabinet-level committee on health improvement and prevention to monitor delivery of plans to tackle obesity.

Karol Sikora, Daily Express columnist and former director of the WHO Cancer Programme, said: “You are what you eat – our minds and bodies run off what we put into the system.

If it’s processed junk, our health will reflect that. My advice would be to reduce fatty foods and red meat consumption, but increase fibre intake and the amount of fruit and vegetables on your plate. “That’s not to say we can never enjoy a treat or two, but there needs to be a balance.

“Some 28 percent of adults in England are obese and a further 36 percent are overweight. Do we understand the damage that is doing to the nation’s health?

“The health consequences of being dangerously overweight are vast, increased risk of developing cancer is part of that as well as serious heart and joint problems.”

Millions of families remain baffled by contradictory health messages and gorge on foods they think are healthy but are causing significant harm.

Few know a small bowl of white rice contains around 10 teaspoons of sugar, while a bowl of average breakfast cereal has eight.

Starch is broken down into sugar by digestion, but in people with Type 2 insulin – which regulates blood sugar – fails and sufferers become resistant to its effects.

Official NHS guidelines still state meals should be based on potatoes, bread, rice, pasta or other starchy carbohydrates, despite mounting evidence they do more harm than good.

The warning comes after the Obesity Health Alliance, a coalition including the British Heart Foundation and the Royal College of Physicians, urged ministers not to dilute fat laws saying it would leave the Government with a legacy of cancelling legislation which could have prevented thousands of children developing obesity.”