"I had no idea it would become this big," she says of the annual reminder to check in on the wellbeing of those around us, which is being celebrated for the tenth time today.

"Gavin was very perceptive, though. He knew how painful [losing a relative to suicide] was and, because that feeling was so strong, he wanted to find a way to give back to others." 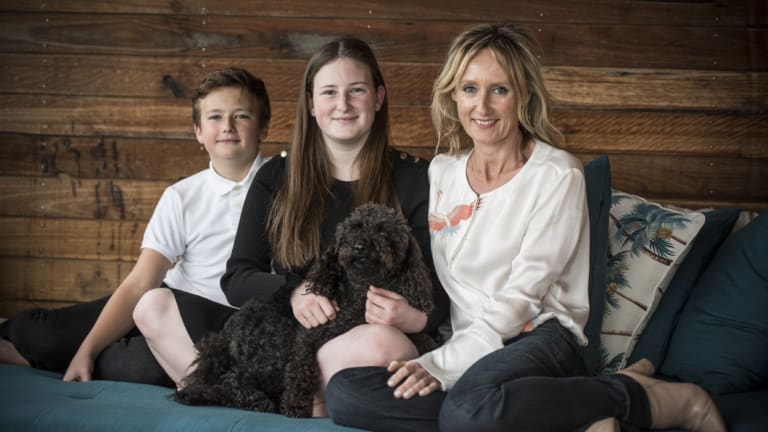 Maryanne Larkin, right, and her children, Josie, centre, and Van.

Gavin Larkin founded RU OK? Day in 2009. After losing his own father to suicide in 1995, the Sydney advertising executive wanted to give people an opportunity to check in with their loved ones, to see if they were coping.

Shortly after the first RU OK? Day, Gavin was diagnosed with an aggressive form of lymphoma. Through stem cell transplants and rounds of chemotherapy, he continued to organise events and promote the initiative, often from his hospital bed.

"Gavin would work on it as much as he could and whenever he could, which I was always amazed by," Maryanne, 51, recalls.

"It's bittersweet that Gavin managed to impart this gift for everybody but particularly for his own wife and his kids, because it's something that we really needed in our own lives," Maryanne says.

RU OK? Day is one of Australia's most well known mental health initiatives.

Statistics from the organisation released earlier this year claim 81 per cent of people have found themselves reaching out to someone over the past 12 months to ask, "Are you okay?"

As someone who has undergone almost unimaginable loss, Maryanne, who lives with her children Josie, 17, and Van, 12, in Sydney's east, says people in positions like hers benefit from the conversation framework the initiative provides the community.

"Gavin gave people the simple question, 'Are you okay?' And I think that's why it's something that everyone can take on."

It was the support of a close network of family and friends which helped Maryanne get through both her husband and son's cancer treatments. She sees RU OK? Day as a way to encourage people to become part of one another's support networks.

"What I always say is, 'It's better to say something rather than nothing.' Because, I know it's the elephant in the room [and] people do get a bit stuck. It doesn't matter what it is, if it comes from a place of caring, the person on the other end is always going to acknowledge it."

The family are still involved with the organisation, and will be attending the day's launch at Sydney's Barangaroo on Thursday morning. Josie does public speaking engagements for the initiative.

"She's very confident, she's a bit like her dad in that way," Maryanne says.

For Maryanne, RU OK? Day is an "emotional" day, although she knows her husband would be "so proud it has become what it has become".

"It's really something he's left behind for everyone to remember him by."