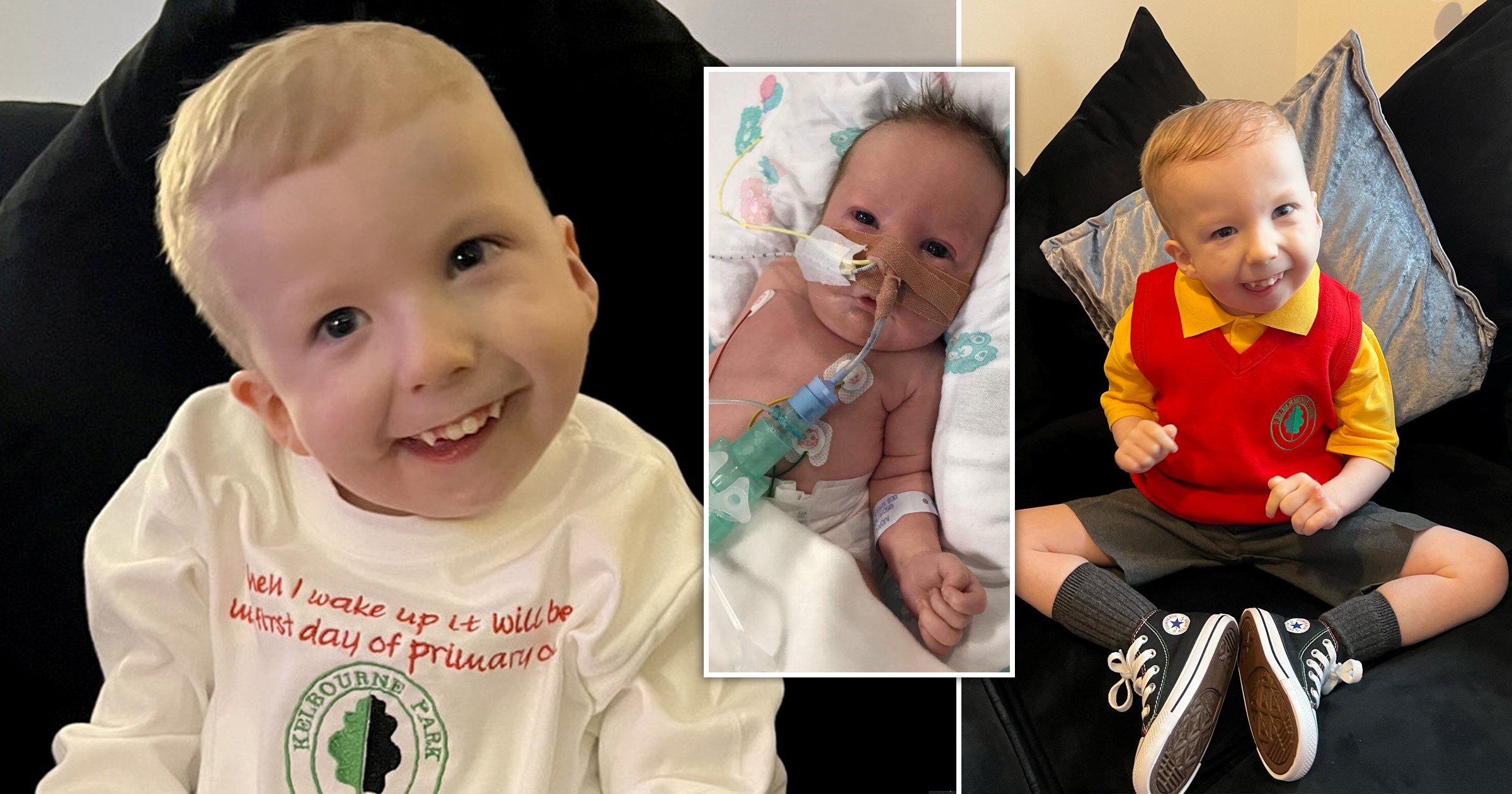 Noah Connell, who was born with a host of health problems that confused doctors to the point that they referred to them collectively as ‘Noah syndrome’, has just celebrated his first day at school.

Mum-of-one Jade, 23, said: ‘The last five years have gone by in what feels like six months.

‘It’s been dead, dead emotional, especially seeing him in his uniform.

‘I have been crying and there will be tears when we wave him off because he has defied everybody’s expectations – even ourselves.

‘He keeps learning to do more and more and proving everybody wrong.

‘We are just so proud, overwhelmed with pride.’

Noah, five, was a big surprise to his parents Jade Gordon, who was 18 when he was born, and dad Kieran Connell, who was just 16.

Photos of Jade at her 18th birthday party show no sign of a baby bump, despite the fact she would have been six months pregnant at the time.

So when she went to Glasgow Royal Infirmary with stomach pains in May 2017, it took doctors a few hours to realise she was in labour.

Noah was born weighing 6lb 7oz, and he wasn’t breathing, so was whisked away immediately for emergency treatment.

He had part of his spine missing, an underdeveloped jaw, cleft palate, small neck and floppy airway, and has so far 11 operations in his young life.

He was diagnosed with Pierre Robin Sequence, facial abnormalities that cause problems with breathing and mean he cannot swallow.

He also has hemifacial microsomia, which means the lower half of one side of his face is underdeveloped – and means if anything gets into his mouth, including water, it could kill him.

Noah became the first baby in the UK to have metal scaffolding inserted into his face to hold bone fragments in place and save his life.

Surgeons conducted an operation called a mandibular jaw distraction, which involved breaking his jaw in two places then straightening his face with metal rods.

His tongue was also pushed forward to cut the chances of him choking.

Jade remembers the 22 hours spent in the hospital waiting room as if it was yesterday, as the first part of the operation took 12 hours, and the second took 10.

It was 10 months before little Noah, from Barmulloch, Glasgow, was discharged from hospital, and Kieran and Jade needed to learn to turn the screws in the metalwork by precise measurements.

And on Wednsday, he was looking very smart in his new blazer as he joins new classmates at Kelbourne Park Primary School, Glasgow.

Noah’s best friend from nursery will be in the same class, with Jade describing the pair are ‘double trouble’.

Even though he’s been through so much Jade said Noah is the ‘smiliest’ little boy who loves shaking hands with people he meets, Christmas, Celtic and Little Mix.

Jade said: ‘He is so loved.

‘Noah sees so many different specialists and is at hospital all the time, but we’re just used to it.

‘I wouldn’t change a single thing.’

Sadly, not everyone the family encounters is kind about Noah, with cruel people online leaving foul comments about him and is family.

It’s also not unusual for people to stare when he’s out in public, but Jade says they don’t let it bother them.

Jade, who was studying to be a nursery nurse when Noah arrived out of the blue, said support from Glasgow Children’s Hospital Charity has helped them.

Kirsten Watson, CEO of the charity, said: ‘Starting school is such an important milestone, and we hope that Noah and all of the patients we support have a very special time at school this week.

‘For 20 years our charity has supported children like Noah, and we’re incredibly grateful to the people of Glasgow for their generosity.’