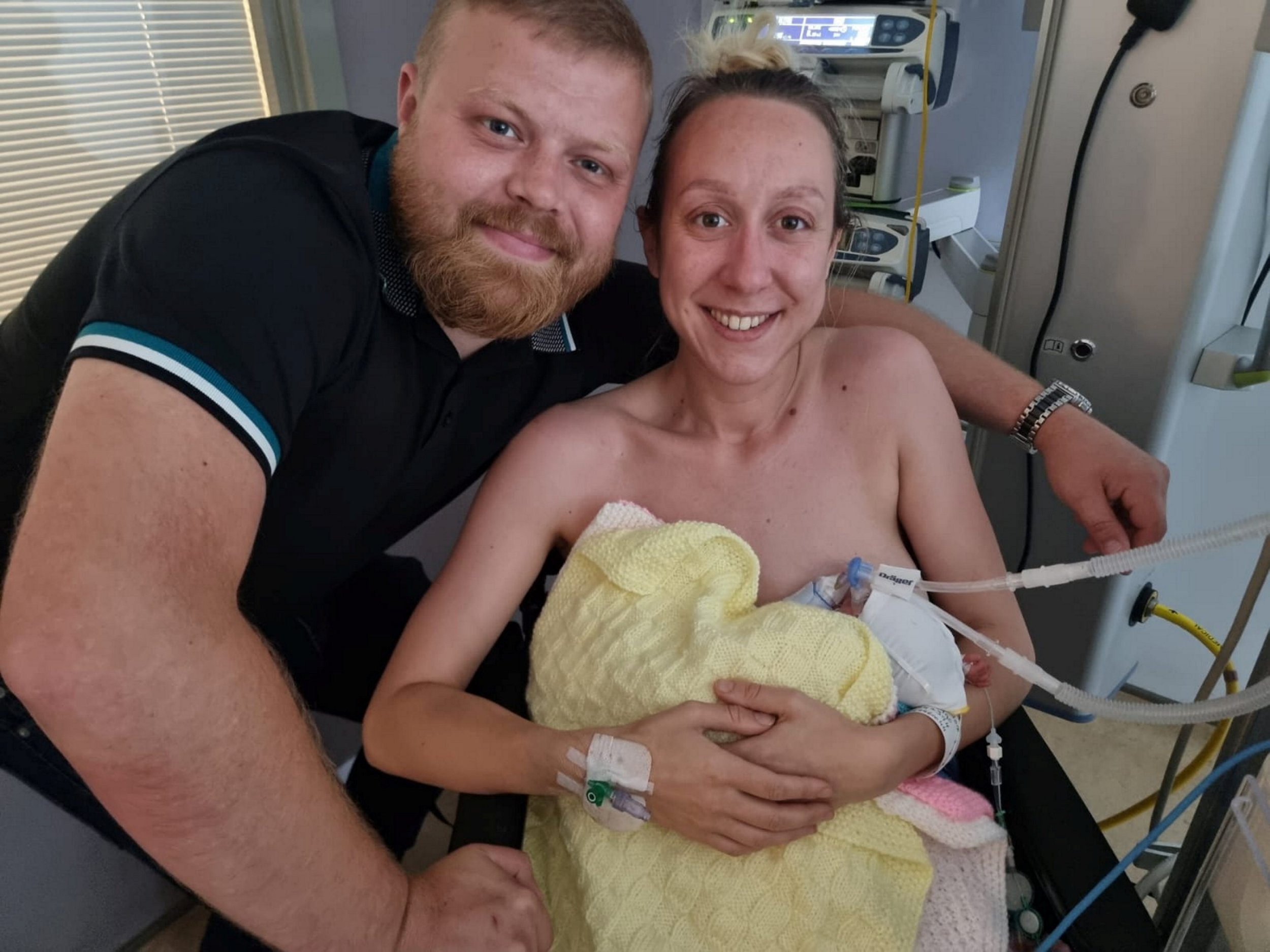 A newborn baby who was 12 weeks premature helped to save her mum’s life as doctors discovered a cancerous tumour.

Harriet Elsdon, 32, was told by medics that it “might have been too late” if she had given birth on her planned due date.

The mum-of-three was diagnosed after visiting her daughter, Maddison Wilmshurst-Smith, in the ICU at Broomfield Hospital, Chelmsford, Essex.

She was experiencing stomach pain so bad that she struggled to walk when neonatal staff told her to seek medical attention.

After a scan, doctors found that a cyst on her right ovary – which had been initially detected at her 20-week scan back – was growing.

The doctors had scheduled in check-up scan for when Harriet was 29 weeks along, but baby Maddison arrived earlier.

During the procedure, they found the cyst had burst and was in fact cancerous.

The mum-of-three, who works as an administrator, had an operation to remove her right ovary and one fallopian tube. She started chemotherapy just weeks later.

Now, awaiting her last chemotherapy session, she is looking forward to ending her treatment – just in time for Christmas.

Harriet, from Brentwood, Essex, said: ‘I feel like I can see a light at the end of the tunnel.

‘It’s been a full-on half a year, but I’m doing okay and I have my baby girl by my side.

‘If Nicholas and I hadn’t been in the hospital visiting Maddison I don’t think I would have bothered being medically checked.

‘As any parent knows, you put your kids first and yourself second.

‘I was too busy worrying about my newborn to worry about myself – it was like she knew she had to come early to save my life.’

Harriet and her partner, Nicholas Wilmshurst-Smith, 30, a gas engineer, were expecting their baby to arrive on October 1 2022.

But on July 1, she experienced stomach pains and dialed 111 with the call handler advising she go to Broomfield Hospital immediately.

Within 20 minutes of being in the hospital, Maddison was born naturally, weighing 2lbs 5oz – despite her due date not being until October.

Mum-of-three Harriet said: ‘After three pushes, she was out.

‘It was such a whirlwind experience, and she was so tiny when she was born.

‘She was passed over to me and Nicholas in plastic wrap before going into the neonatal ward.’

After three days in the hospital, the couple returned home to their two boys, Lincoln, four and Logan, two.

Baby Maddison remained on the neonatal ward while she was treated for stomach infections and given vitamins for growth.

But on 7 July – just five days after giving birth – when visiting her baby at Broomfield Hospital, Harriet decided to get checked out as she was experiencing strong pains in the right side of her stomach.

After having a pelvic ultrasound, medics spotted a mass on her ovary and advised an exploratory procedure.

Harriet said: ‘After I woke up from the operation they broke the news.

‘The moment they said ‘tumour’ and ‘ovarian cancer’, I knew that chemotherapy would be on the cards.

‘The doctors said it was my choice to have chemo or just relied on regular CT scans, but I immediately knew I was going to have chemo because I had to stay alive for my children.

‘Luckily they were able to remove the tumour and right ovary and the following month I started my chemotherapy.’

Harriet’s first round of chemotherapy began on 29 August, with her going every two weeks for sessions to Broomfield Hospital.

Harriet said: ‘Nicholas has been amazing, holding to the fort at home with the boys and with me being in and out of the hospital!

‘I luckily haven’t experienced too much hair loss, more thinning than anything.

‘My underarm hair has stopped growing which I’m not complaining about- but I wish it was my leg hair instead!

‘Chemo isn’t fun but I’ve gotten through it, and I can’t wait to have Christmas at home with the family.’

And little Maddison is thriving.

Harriet said: ‘She’s already a demanding baby at only four months but she’s completed our family.

‘Even though she was tiny at birth, she thrived in the ward compared to other premature babies.

‘She’s been so strong since she’s been born- I never thought premature babies could be so robust.

‘I always think, if I haven’t gone into early labour, I don’t think the tumour would have been caught in time.

‘It’s almost like she knew she had to come out.

‘If she didn’t, I’d be looking at stage three or four ovarian cancer.

‘Maddison really saved my life- but she won’t hear that from me as she’ll be using it against me when she’s a teenager.

‘I was so lucky my cancer got caught when it did and that I’ve had such good treatment.’