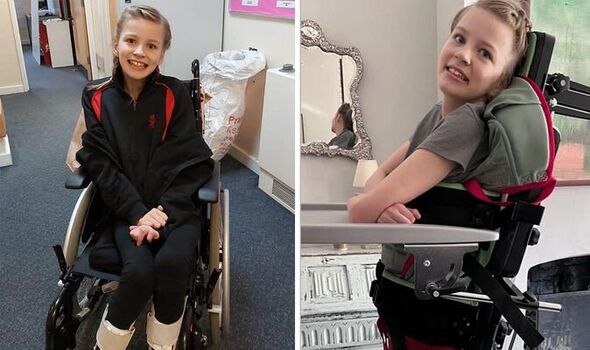 Ali Candy-Waters, 53, has seen her daughter go from being a “healthy, happy and beautiful baby” to no longer being able to walk, talk or feed herself, all due to a disease called H-ABC. Mainly affecting babies and young children, H-BAC is caused by a mutation in the TUBB4A gene and causes problems to certain parts of the brain. Many individuals sadly lose their life in their late teens, as the basal ganglia and the cerebellum in the brain, which control movement, reduce in both their size and function, leading to motor problems.

Sharing her story with Express.co.uk, Candy-Waters shared: “Knowing there is no cure for Aggie’s condition is absolutely heart-breaking.

“As a parent, you want to be able to protect your child from anything, but there is nothing we can do against this disease. We just try to support her in the best ways we can.

“But there is a great fear that, with Aggie already into her teens, treatment could take years to develop. Time really is running out for our daughter.”

The condition, which H-ABC belongs to, is known as leukodystrophies, which target the “white matter of the brain”. The disease disrupts the growth and maintenance of the “myelin sheath” which acts to insulate nerve cells and allows cells to communicate between each other.

“Aggie was a healthy, happy and beautiful baby,” Candy-Waters added, speaking more about her heartache for her daughter. “She was like the cat who got the cream.

“She was feeding well, but she had a problem with crawling and she was very late sitting up properly.

“It has been devastating to watch her body giving up on her, but we always stay positive.”

First diagnosed in 2015, after undergoing an MRI scan, doctors first thought Aggie had hypermobility, which is defined as very flexible joints that can cause pain.

With medical professionals left baffled, Aggie was left undiagnosed for a lengthy period of time, as her mother went on to explain.

“It took a long time to find out exactly what Aggie had,” she said. “Without getting a correct diagnosis, thousands of patients could be taking the wrong medications.”

The condition is hard to diagnose due to the similarities it shares with cerebral palsy – a group of disorders that affect a person’s ability to move and maintain balance and posture.

Specifically, patients with H-ABC can suffer from difficulties walking, sitting up and swallowing. They can also develop numerous symptoms including:

While those who have developed motor skills in early childhood can regress.

Initially, scientists believed that TUBB4a leukodystrophy only affected 200 people worldwide. But the latest research seems to suggest otherwise, with the number being far higher than originally thought.

In order to help avoid misdiagnosis, medical professionals seem to determine H-ABC based on physical symptoms, brain imaging, and results of genetic testing.

Magnetic resonance imaging (MRI) of the brain is a key part of the process. This helps to detect brain tissue patterns that are characteristic of H-ABC. However, genetic testing is the only means of confirming changes in the TUBB4A gene.

Despite her agony, Candy-Waters hopes that a new therapy being developed by biotech firm SynaptixBio is going to be the world’s first treatment to “revolutionise” how TUBB4a leukodystrophy is treated.

He went on to say: “The new approach provides the potential to stabilise, improve quality of life and extend life expectancy in children suffering from the condition. Successful prevention of leukodystrophy progression would be a revolutionary life-saving and life-enriching treatment for children around the world.

“This project will change people’s lives. The research and development of a clinically-proven treatment for TUBB4a would be a real game-changer for patients and their families. There is a real chance to improve the lives of leukodystrophy sufferers. We want to ensure that dream becomes a reality.”