Choosing whether to have children is a highly personal decision. Ultimately, the choice belongs to you and your partner, not anybody else who tries to weigh in or sway you either way.

This is true for any circumstance, but it is even more crucial to keep in mind in situations where bigoted or controlling in-laws are involved. Take it from this Redditor, who told her racist parents where to shove it after they made an awful comment about her hypothetical children with her Latinx partner.

Writing on the infamous /AmITheAsshole Subreddit, user @ComfortableFuture222 gave commenters some context: She (22F) is a white woman who has been in a long-term relationship with her high school sweetheart, a 23-year-old Cuban man named Luca, for years. Luca is infertile, so the chances of them having children together are slim. But this doesn’t bother her, she wrote: “Luca and I are on the same page, and we want to live our 20s free of the responsibilities kids bring.”

Her family, however, sees things differently. “I am an only child and the only one left to ‘continue our bloodline’ — my dad’s words,” @ComfortableFuture222 explained, which, what?! Red flag number one, in my humble opinion.

At a recent family dinner, @ComfortableFuture222’s mom and grandmother asked her and Luca about their plans for marriage and kids. The conversation quickly took a turn: “They asked when we planned to get married, and we said it wasn’t our main priority. Mind you, we have just begun our careers and are not in a financial state to even consider a wedding. My mom’s rebuttal to my statement was that she would cover any expenses, which also meant she would control everything. I said firmly, ‘No, thank you, we’ll wait.’”

Then they pushed the couple about having kids. Her mom and grandmother claimed @ComfortableFuture222’s fertile clock “is ticking,” which is a ridiculous thing to say to a 22-year-old. To make matters worse, when Luca mentioned his infertility, her mom lost it. 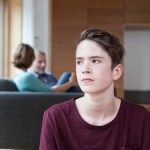 A Mom Canceled Her Son's Birthday After He Made a Sexist Comment, But Reddit Wants Her to Reconsider

“My mom goes, ‘So you won’t give me proper grandkids?’ She then goes, and I quote, ‘I have already accepted that my grandchild won’t be pure with your genes. Now you say you can’t have any at all?’”

BIG yikes. In case it wasn’t clear, her mom was referring to Luca’s “darker complexion” as a Latinx person — so, being blatantly racist to his face. Naturally, @ComfortableFuture222 and her BF were enraged. Luca went on to ask if they would love their hypothetical non-white child, and the mom had the audacity to “[call] him rude for insinuating such a thing.”

At that point, the couple stood up and left dinner, with @ComfortableFuture222 telling off her racist family members on the way out. But wait, it gets worse. Her mom texted her later — not to apologize, but to double down with an absolutely wild suggestion.

“She called me after I left her on read and said I am being brainwashed by Luca,” @ComfortableFuture222 wrote. “She says she can arrange an artificial insemination with one of her friend’s (white) sons. That I should want kids, especially now because I can stay home and raise them. … I called her a racist bitch who I am frankly ashamed to call my mother. She cried and hung up, and I received a text from dad saying I took it too far, and I’m not allowed back in their home if I don’t plead for their forgiveness and oblige by their standards. I replied fuck you and blocked them both. So, AITA?”

Redditors in the comments resoundingly assured her she did nothing wrong. In fact, most of them cheered her on for blocking her parents — and suggested that she go no contact for some time.

“NTA,” one person opined. “Your mom needs to be making the apologies, not receiving them. You and Luca are adults, and if you don’t want kids, that’s that, no matter what anybody else in the family wants for you.”

“I am so sorry you had to deal with that,” another user commented. “I know it hurts right now, but there is not a single doubt that your parents are awful people. They are unapologetically racist and just plain cruel. You and Luca are 100 percent better off without these people in your lives.”

Many also pointed out that @ComfortableFuture222 doesn’t owe her parents grandkids.

“You don’t owe anyone kids. Ever,” one person affirmed. “Whether you are an only child or have 20 siblings, regardless of whether you or your partner can. It’s entirely up to you. You are not a broodmare.”

In an addendum to her original post, @ComfortableFuture222 sincerely thanked AITA Redditors for their supportive advice. She even showed the post to Luca and his mother, who has been “the true definition of a good mother and has shown me more unconditional love [than] my mother has in my 22 years of life.”

“I have gone completely no contact with my family as of today,” she added. “This incident occurred about a week ago. Luca and I have been looking for a place together, and my family will not be knowing where that is.”

Before you go, check out these mental health apps we swear by: