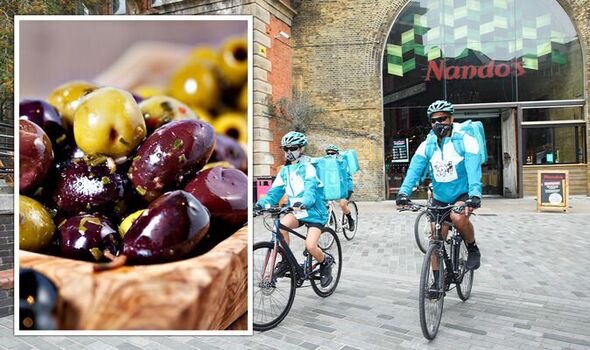 A former Nando’s worker, who wished to remain anonymous, told Express.co.uk that the trick involves offering olives to customers, which have a cost of £3.75.

The former employee explained: “When I was at the till we had to ask questions that seemed like you were just being nice with customers.

“But they were actually to make you buy more.

“Like I had to casually say: ‘Do you fancy some olives while you wait for the food to come out?’

“Always before you say ‘Is that it’ or ‘anything else?’.

“So they can add that while they are placing their order.

“And obviously, the olives are not free…

“You have to pay for them!”

The Nando’s former worker continued: “It didn’t work for everyone but many people would say ‘Yeah sure, why not?’.

“I would always see my manager doing this, but they didn’t tell me about this trick when I started as I was on the floor.

“When they moved me to the till my manager explained we had to do that to try and make them buy more.”

According to the Nando’s former worker, they use a similar technique to make customers order more drinks.

“We had to do the same with the drinks.

“At Nando’s you can drink unlimited soft drinks such as Fanta or Coke, but not juices.

“So if someone ordered a juice we had to automatically ask if they wanted to include another drink.

“So they would pay for the glass.”

However, the former worker explained this is “the same glass” they give for the juice.

“So basically when they finish drinking the juice, they could use that same one to have Coke.

“This way, they end up with two glasses, which is completely unnecessary.”