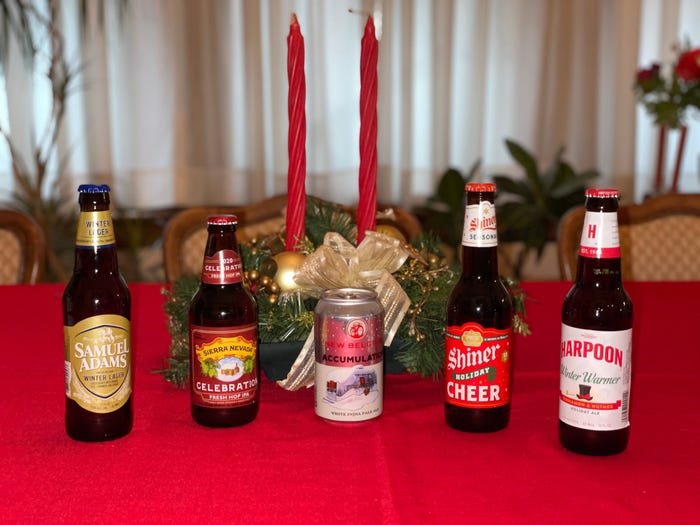 This holiday season you may want to diversify your normal beer consumption and try out a seasonal holiday brew.

But there can be so many beers to choose from, you may not know where to start. To make your decision easier, I decided to put five widely available holiday beers to the test.

Here are the five holiday beers I tried, ranked from my least favorite to my favorite.

The Shiner Holiday Cheer from Spoetzl Brewery was the cheapest beer I bought. 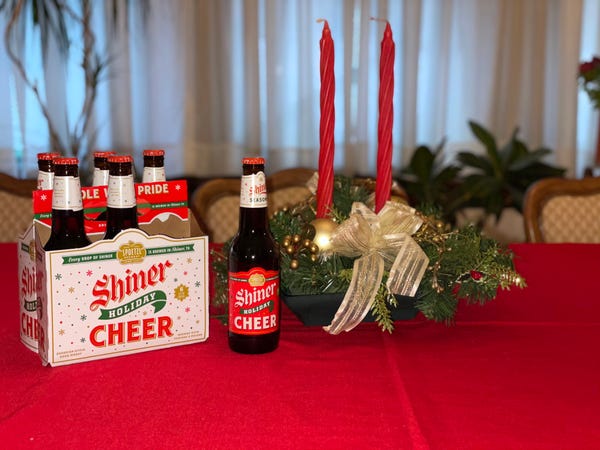 A six-pack of 12-fluid ounce bottles cost me $8.99 at my local beer store in Buffalo, New York. 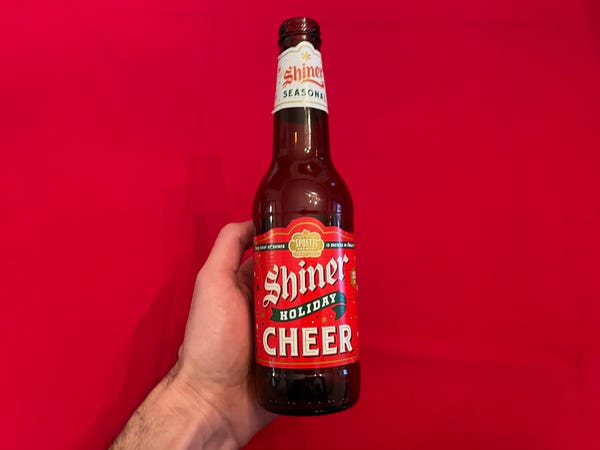 The Holiday Cheer is a Bavarian-style dark wheat beer. According to Spoetzl Brewing, it incorporates the seasonal flavors of Texas peaches and roasted pecans in this holiday offering.

Unfortunately, in my opinion, the peach flavor was way too sweet, essentially turning it into an alcoholic Snapple peach tea. 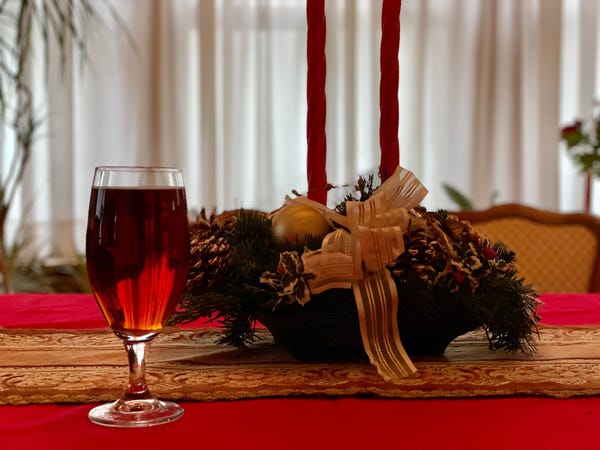 I'm a fan of German-style beers but found this one to be muddled by its sweet American flavors. I would have enjoyed a more balanced composition; I wish the roasted pecans, which normally have a rich buttery flavor, played a more prominent role flavor-wise. To play devil's advocate, it could just be that my northern palate isn't used to this level of Southern sweetness.

I applaud Spoetzl for rolling the dice on an adventurous flavor but I don't foresee myself buying this beer again. I'm generally not a picky beer drinker but I couldn't even make it through the whole bottle.

The Harpoon Winter Warmer was the second cheapest beer I bought. 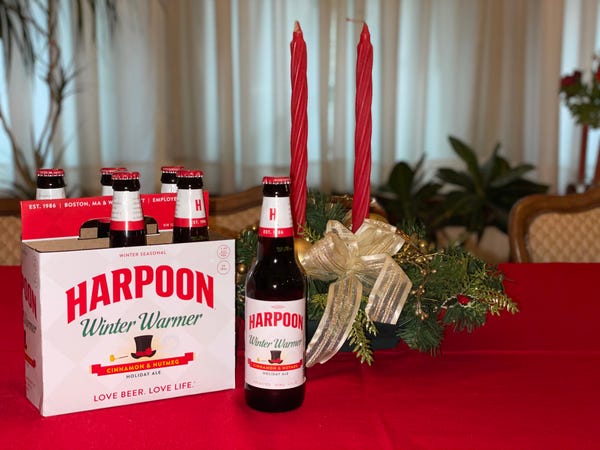 At 5.9% alcohol by volume, it was the third strongest beer I sampled. 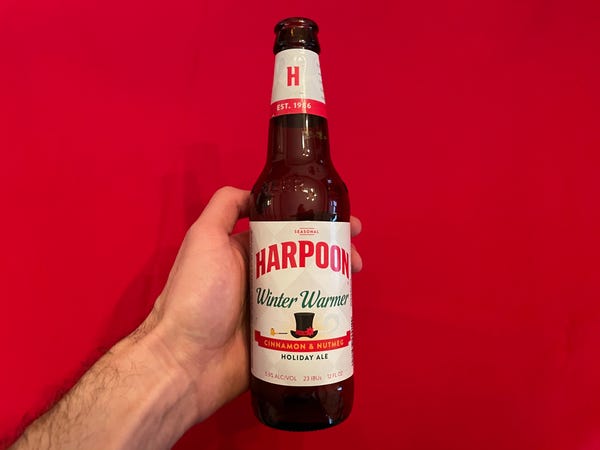 This brew is a holiday ale. It has a lighter body with a strong cinnamon flavor and a hoppy finish.

The beer's holiday flavor combination sounded appealing, but it ended up being one of my least favorites. 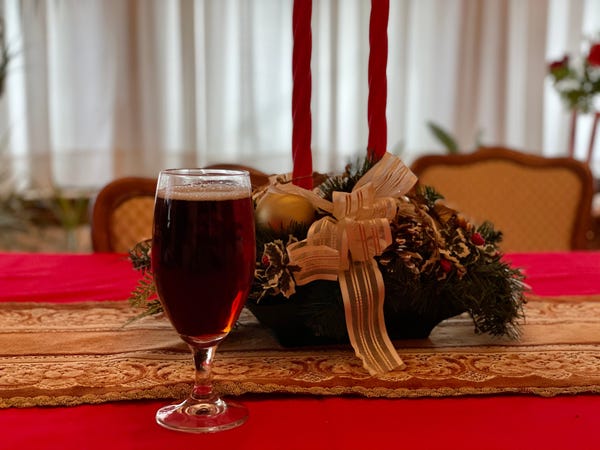 I was really excited to try this beer because of its cinnamon and nutmeg flavor. I'm a big fan of that flavor combination in lattes and expected it to translate well to beer.

But I was a little bit disappointed — it had a decent flavor but was far too cinnamony for me. As I continued drinking the beer, the spice from the cinnamon became so intense that it actually started to make my stomach hurt.

In an email to Insider, Harpoon brand manager Tim Kast acknowledged that the beer's cinnamon flavor isn't for everyone, but he said it has been a popular beer since its release in 1988.

"With how much cinnamon and nutmeg get used in the Winter Warmer recipe, that spice-heavy flavor profile can definitely turn some folks off," Kast wrote. "The spice profile is also a big draw for other folks though, and it's one of the reasons why Winter Warmer has garnered such a loyal following over the years."

For someone who really likes a strong cinnamon flavor, this will be right up their alley. But in my opinion, there are better options out there for the person looking to treat themselves to a holiday beer.

Samuel Adams' Winter Lager was tied for the second most expensive beer I bought. 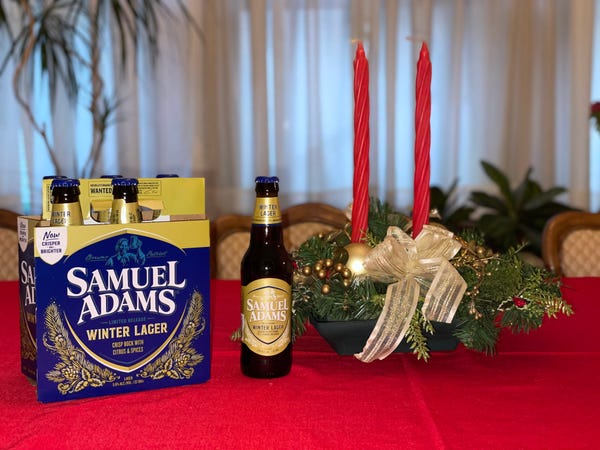 The beer had the second-lowest ABV of the lot at 5.6%. 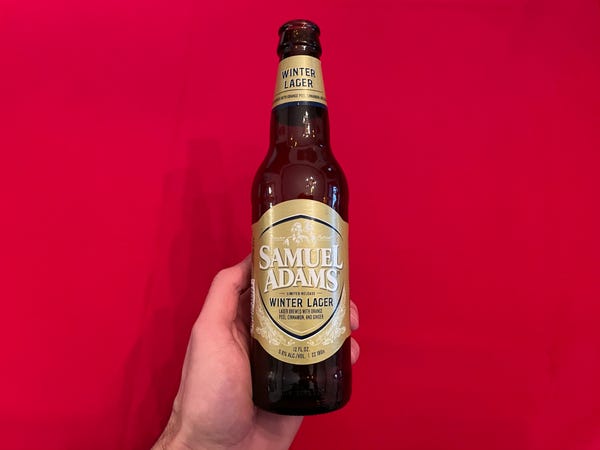 Its lower ABV makes it appealing for folks who don't want to overdo it at their family dinner.  Typically I don't go for low-ABV domestic beers, but this winter lager totally surprised me.

Sam Adams' Winter Lager is a reliable holiday beer with a great flavor. 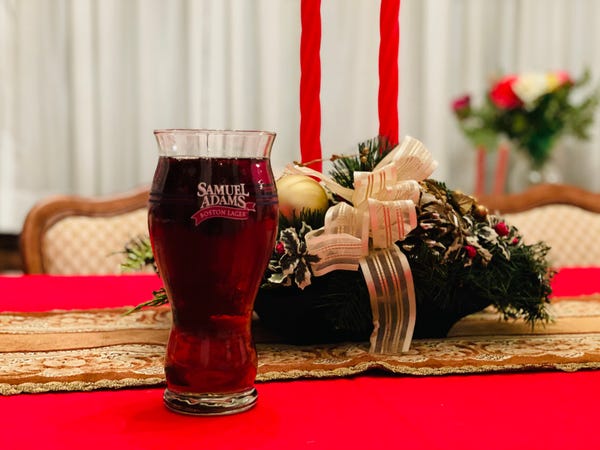 This Sam Adams brew has an infinite drinkability — the notes of orange peel, cinnamon, and ginger work together perfectly to create a crisp, refreshing beer. It also had a body that wasn't too heavy but not too light to the point where it tasted thin. I could absolutely see the appeal of working your way through a six-pack during a holiday movie marathon or holiday celebrations with the family.

The only reason it's not higher on my list is simply that I personally gravitate towards IPAs and hoppier beers. I'm sure some will disagree with me, but if Sam Adams takes this flavor and applies it to a winter IPA, they'll strike gold.

The Sierra Nevada Celebration Fresh Hop IPA was tied for the second most expensive beer I bought. 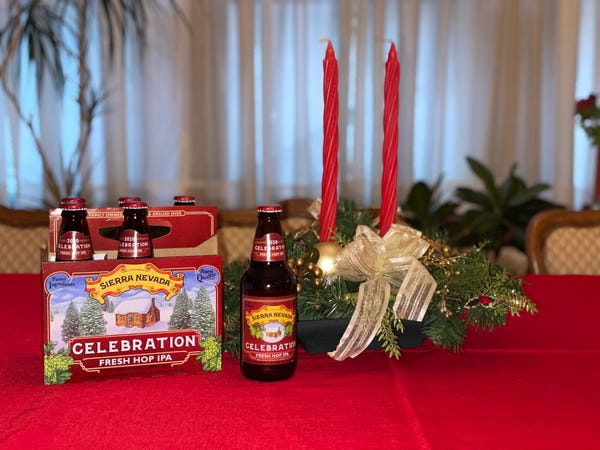 Sierra Nevada's brew had the highest ABV at 6.8%. 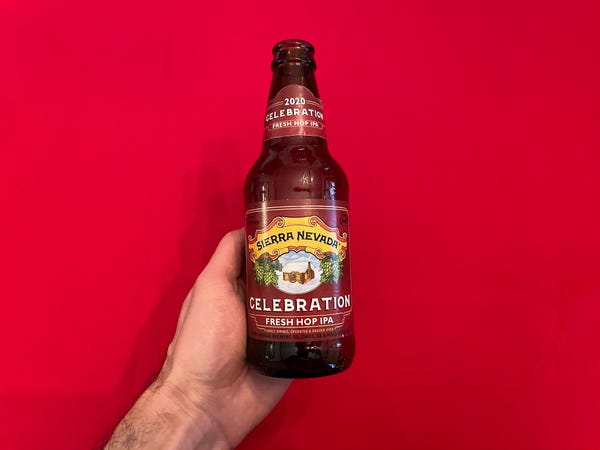 It has the perfect alcohol content: You can drink one and feel slightly buzzed or knock a few back to achieve the perfect level of yuletide drunk, if that's what you're going for.

The Sierra Nevada Celebration Fresh Hop IPA had a robust flavor but was ultimately a bit too hoppy to take first place. 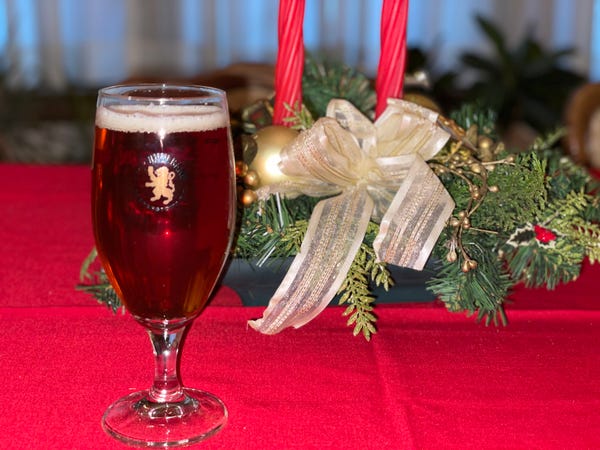 I know, I know. I just complained about the last beer being not hoppy enough. But the finish on this tasty brew was pretty bitter.

And that's exactly what the brewer was going for: "While other holiday beers go heavy on spice and sweetness, Celebration wields fresh hops — the first harvests of the season," its website states.

In my opinion, Sierra Nevada could have toned down a bit of the beer's sharpness in exchange for a little more sweetness from the notes of pine, citrus, and caramel.

With that being said, this beer is beautifully bold and carries a nice flavor of bitter hops, which many people will enjoy. The brewery has been shipping this wintertime classic across the country since 1981 and it's easy to see why.

The best — and most expensive — beer I tried was New Belgium's Accumulation White IPA. 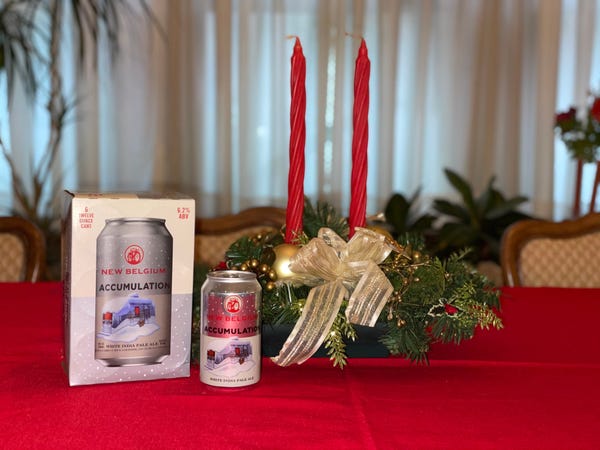 The Accumulation had the second-highest ABV at 6.2%. 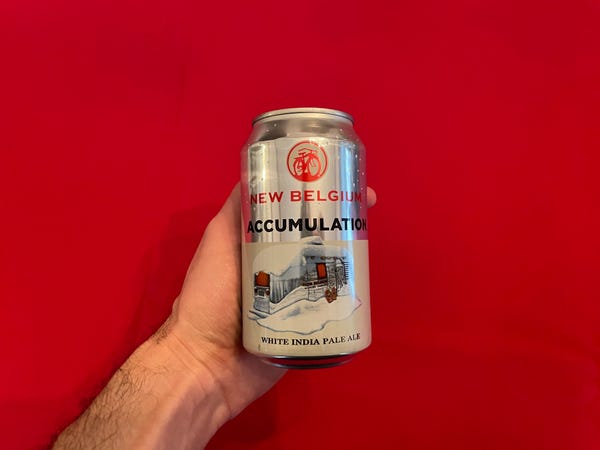 This brew hits all the marks for me. It has a higher ABV, a hoppy flavor, and is wonderfully aromatic.

What really won me over was the Accumulation's juicy citrus flavor and light body. 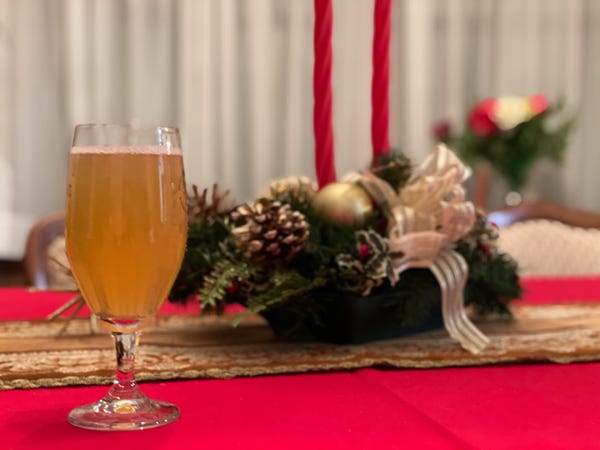 In my eyes, this is a perfect IPA. It's bursting with a fruity aroma and is anchored by a nice haze. There are prominent notes of juicy citrus — perhaps a mix of tart orange and sweet grapefruit? — that act well with the accompanying pine and malt flavors.

I found the beer itself silky smooth and easy to drink — maybe a little too easy. More than anything, it has a semi-bitter finish that's prominent but not overwhelming enough to coat your mouth.

For the extra dollar, I think it's absolutely worth it to spend up on this beer. It's the perfect brew for any activity this holiday season.