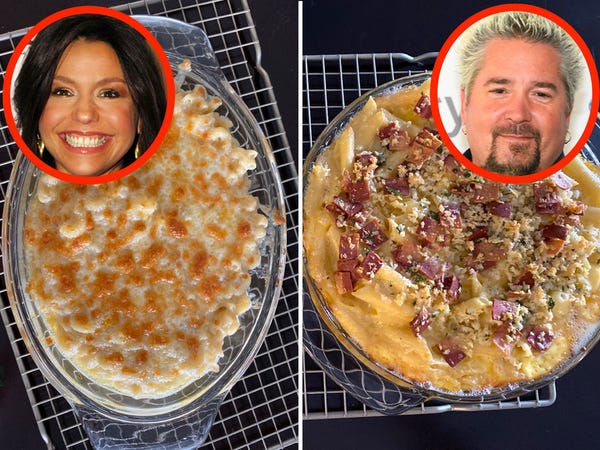 Even celebrity chefs put their own spin on comfort foods, including macaroni and cheese.

To see which famous recipe has the best flavor and value, I followed instructions from cooking icons Guy Fieri, Rachael Ray, and Robert Irvine.

Here are the recipes I followed:

Read on to see how these celebrity-chef recipes stacked up.

Guy Fieri's recipe required many steps and a sickening amount of heavy cream. 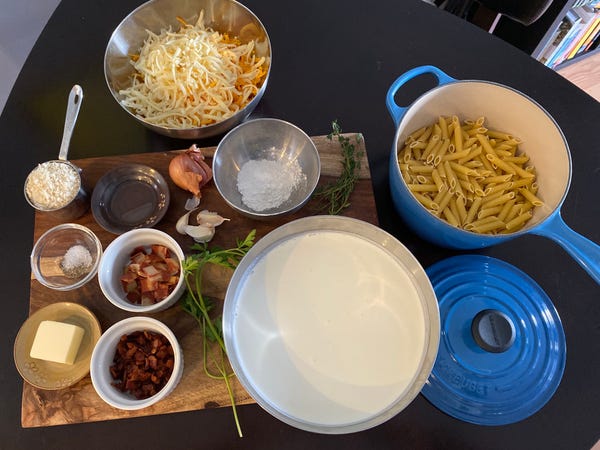 As I gathered the ingredients to make the mayor of Flavor Town's macaroni and cheese recipe, I was shocked by the amount of heavy cream in the dish.

Heavy cream is great since it can add a rich, smooth texture and a lot of flavor to a meal, but I have never in my life seen a recipe with four cups of heavy cream. Measuring all of it out kind of turned me off.

This recipe also required more ingredients than the others and it had a pretty lengthy list of instructions.

After more than 30 minutes of cooking, it was time to make the cheese sauce and the penne. 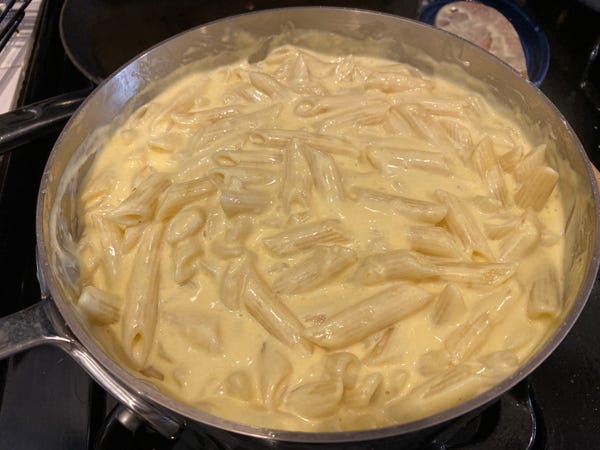 For starters, the recipe calls for dicing and cooking bacon. I don't eat meat, so I had my partner cook it. I later divided the recipe into two versions — one with real bacon and one with a plant-based option.

Next, I had to roast shallots and garlic, chop them, sauté them in bacon fat (I used butter), and then use it to make a roux (a floury mixture that helps thicken sauces).

Truthfully, roasting the shallots and garlic seemed like a waste of 25 minutes and it made it especially hard to chop them. I wish I could've just caramelized everything on the stovetop, which would've been just as flavorful and a lot easier.

I cooked the sauce and pasta simultaneously, although it took a while to reduce the sauce since it had so much heavy cream.

After the penne was done cooking, I mixed it with my cheese sauce and then split the mixture into two separate baking dishes.

Then, I finished off the macaroni and cheeses with a topping that consisted of melted butter, panko breadcrumbs, parsley, and bacon.

I cooked everything in the oven for another 30 minutes.

The macaroni and cheese tasted rich and it reminded us of diner food. 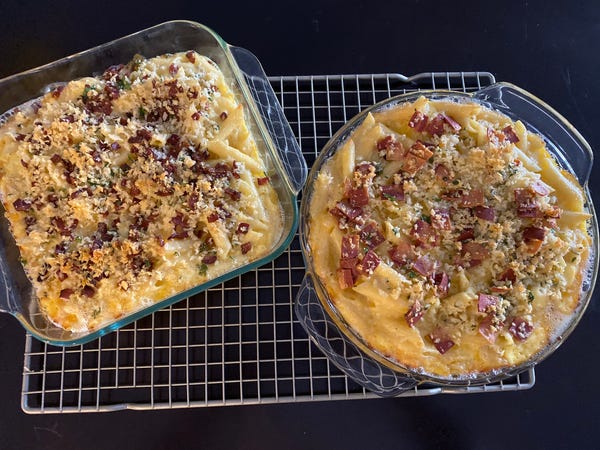 With four cups of heavy cream and three cups of cheese (cheddar and pepper jack), the resulting macaroni dish was unsurprisingly rich and creamy.

Unfortunately, all of the effort that went into preparing the shallots and garlic seemed trivial since I couldn't taste either ingredient at all. I was also looking forward to a kick from the pepper jack, but there wasn't much of a cheesy flavor in this dish.

This macaroni and cheese mostly just tasted like cream and bacon. The entire thing resembled a baked penne Alfredo dish you might find at a diner, which is no surprise since this recipe is from the host of "Diners, Drive-Ins and Dives."

Overall, this somewhat bland dish took a lot of effort and ingredients to make, so I wasn't thrilled. 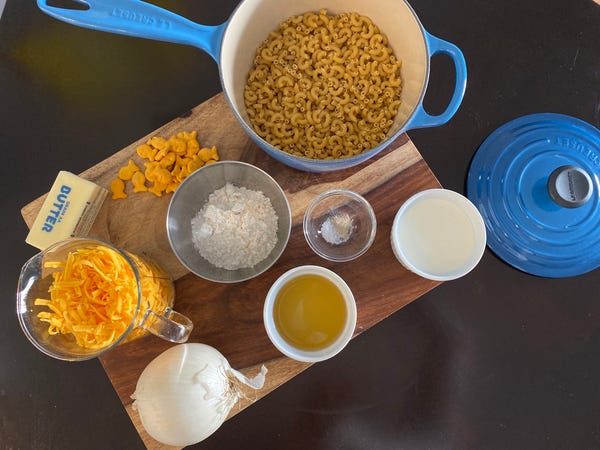 It also called for cheesy crackers, which brought me straight back to my childhood (and maybe college, too).

I whipped up the sauce as I cooked the elbow noodles, and both were basically finished at the same time. 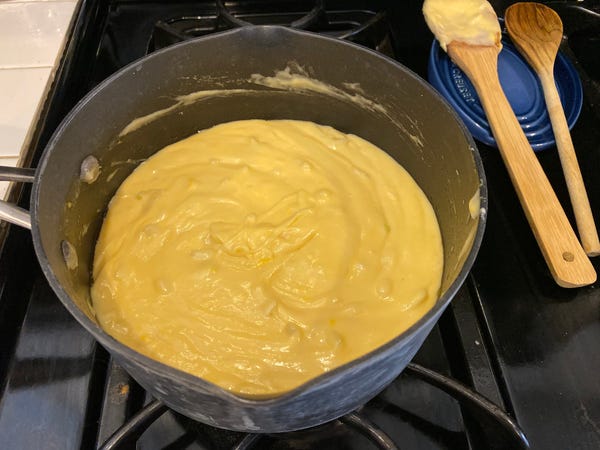 I started by sautéing the onion, then adding butter and flour to start the roux.

Unfortunately, it seemed like there was a bit too much flour in the sauce and I had to add much more vegetable broth to thin it out. If you want to make this recipe, I highly recommend using about a third less flour than it calls for.

After cooking my pasta and draining it, I mixed it with my sauce and transferred everything into a baking dish.

Then, the recipe says to top the dish with crushed cheddar crackers — it recommends Pepperidge Farm Goldfish so that's what I used.

Just a sprinkle didn't seem like enough to me, so I added about 1 1/2 times the amount the recipe required and popped the uncovered dish in the oven to get nice and crispy.

The macaroni and cheese was pretty good, but I would have loved more of the crispy topping. 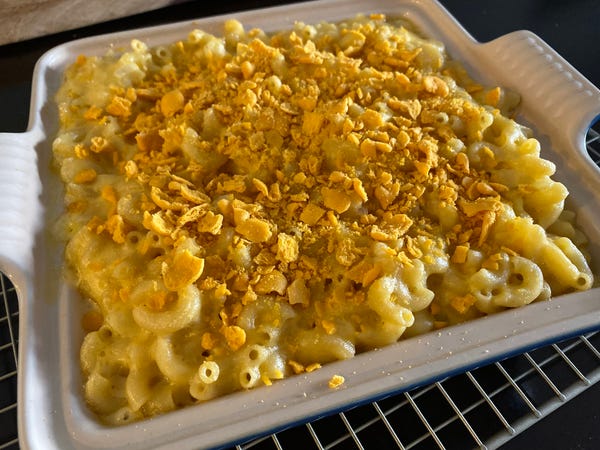 Because of the onion and the thick roux, the dish became a tad mushy in the oven. Even so, it was tasty and the cheddar-cheese flavor came through really well.

The overall cooking process was easy and took about an hour, plus the ingredients weren't expensive. I also loved that this was a thicker macaroni and cheese.

My main issue with Irvine's recipe is that the directions for the roux are a bit vague — it called for ½ cup of flour or "as needed" and ½ to 1 cup of broth or "as needed."

I cook often, but I'm not a professional, so it was hard to know when there was too much flour or broth before it was too late. I think this contributed to the slightly mushy texture in the final result.

Also, I wish I'd been more heavy-handed with the topping. The crunch was delicious, but I think entirely coating the top of the dish with crushed crackers would've been even better. 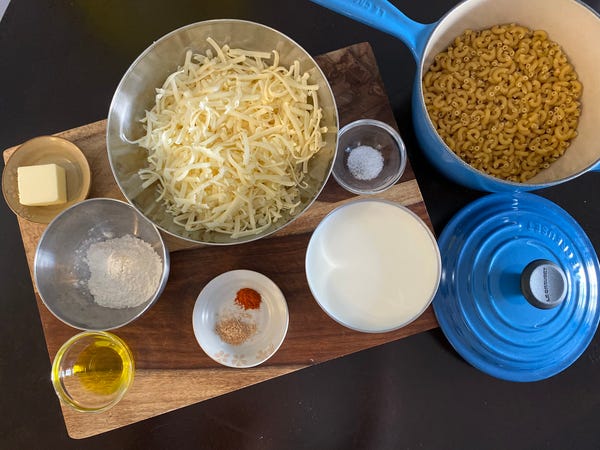 As the host of "30 Minute Meals," it makes sense that Ray's recipe for white-cheddar macaroni would be ready for the table (or the bowl on your lap while you watch TV in the living room) in less than half an hour.

I also liked that Ray's recipe was slightly unique in that it called for white cheddar instead of yellow cheddar.

The roux was a breeze to make, and there were no mishaps with it being too thick or too thin. 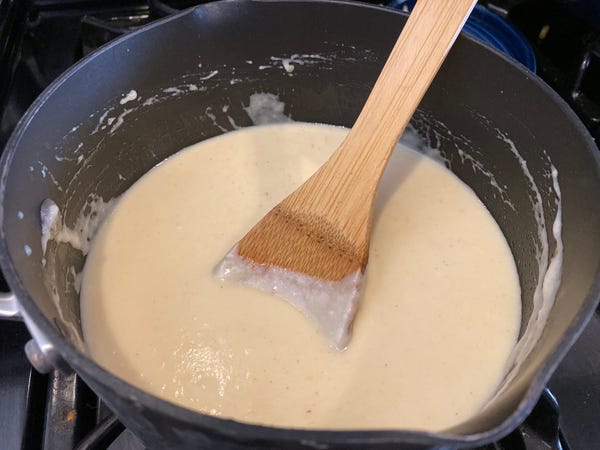 Like with the other recipes, I shredded the cheese by hand because when making a cheese sauce, it is best to shred cheese yourself.

Pre-shredded cheese is oftentimes coated in cellulose to prevent it from sticking together in the bag — and the cellulose works so well that it can prevent cheese from melting together in a sauce.

Then, I got started on my roux, which came together well. The amount of flour in the recipe was spot on and I was able to prepare my pasta as my sauce cooked.

After a few more simple steps, I put the dish in the oven using the broil setting, as directed.

My favorite part was watching the cheese melt into a giant puddle and then crisp up into browned bubbles — it made my mouth water.

The resulting macaroni and cheese was tasty, but it was definitely nutmeg-forward in flavor. 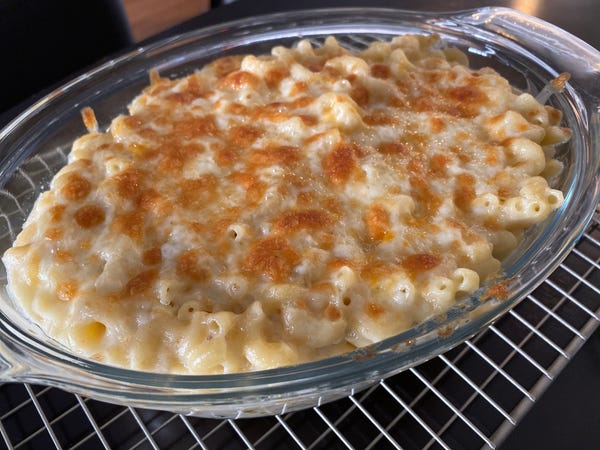 Once it was done, I eagerly scooped the gooey macaroni and cheese onto a plate and took a bite.

It was creamy and gooey, just as a good macaroni and cheese should be. The cheese topping got slightly crispy, which was nice, but I think this would be even better with some fresh parsley on top.

My biggest complaint about this macaroni and cheese is that the nutmeg was the most prominent flavor. It was OK, but if I made this again, I would reduce the amount of this strong spice by half for a more subtle flavor that complements, rather than overpowers, the cheese.

Overall, no recipe was perfect, but Ray's was definitely my favorite. 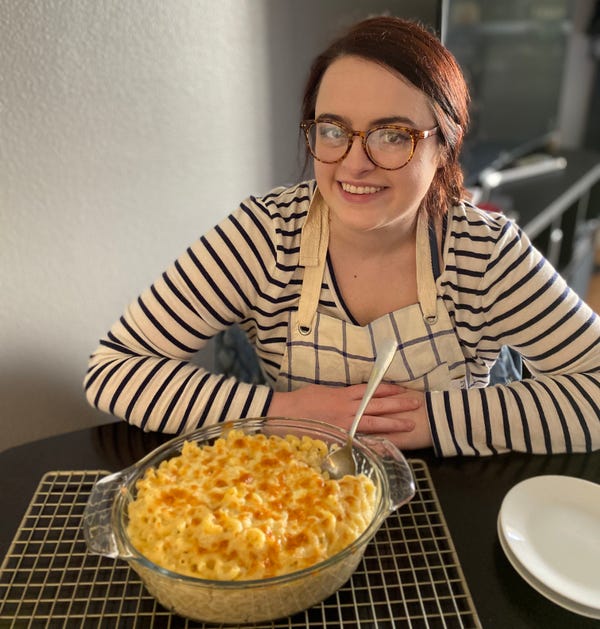 The dish I made with Fieri's recipe was very rich and creamy, but the heavy cream dominated the dish, drowning out the flavors of garlic, shallot, and the most important ingredient: cheese.

It also took the longest to make and required the most ingredients, so I probably wouldn't make it again.

The macaroni and cheese I made using Irvine's recipe was very cheesy, and the cracker topping really elevated the whole dish for me. His dish inspired me to start topping my own macaroni and cheese with Goldfish crackers, but I won't be trying to follow his vague roux recipe ever again.

Overall, following Ray's recipe resulted in some delicious macaroni and cheese, and I loved that it was so simple. Plus, the dish was really cheap to make and its bubbly, gooey topping is hard to beat.

I plan to follow her recipe again, but I would cut back on the nutmeg and top the finished product with fresh herbs to help balance out all of the creamy, gooey cheese.