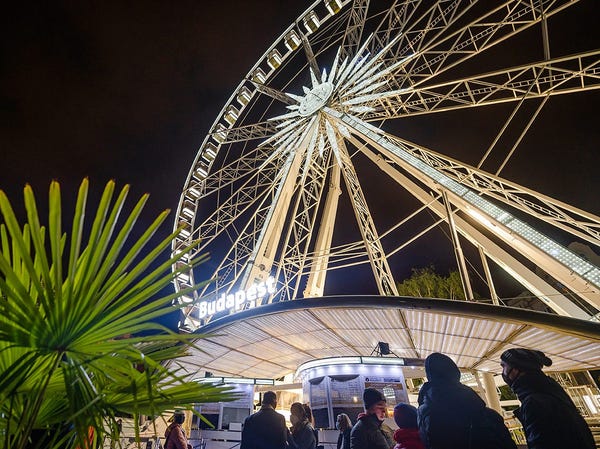 With the pandemic ongoing, hospitality has been forced to take restaurant going to new heights, and in this case — quite literally.

Costes restaurant staged the event in hopes of showing diners that restaurants are continuously looking for ways to make eating out safer.

Speaking with Reuters, Costes' owner Karoly Gerendai said that the idea of a socially distanced dinner service came to him after noticing that attendance was only at a tenth of pre-lockdown levels.

"Now that there are not many people either on the wheel or in the restaurant because there are no tourists, the opportunity arose that we could do this," Gerendai said, adding that "the Ferris wheel is ideal with its separate cabins so we can solve the issue of separate seating for guests."

Tickets for the experience were priced at 48,000 forints ($155) and sold out within days of going on sale, according to Gerendai, who is planning to repeat the event in the warmer months next year.

The restaurant shared the menu for the four-course meal via its Instagram, which included stewed beef and duck liver terrine with roasted root vegetables, grilled gnocchi with Jerusalem artichokes in marrow sauce, and Poire belle Hélène (poached pears) for dessert.

In May, Mediamtic Eten in Amsterdam trialed its "Serres Sépparées" (separate greenhouses) which were designed especially for two people to dine in, ideally from the same household.

Besides building separate pods for diners to enjoy a meal in, other restaurants have been finding quirky ways of encouraging social distancing at their establishments.

A representative for Costes told Insider that guests described the event as "a lifetime experience."

"We asked the participants yesterday to let us know about their experience and everyone is talking in superlatives about the event."

The representative said that it was very cold on the night and that cabins on the Ferris wheel aren't heated, although they did provide guests with blankets and pillows to keep them warm during the three-hour-long meal.