On the latest cover of Vogue Australia, Snapchat co-founder Evan Spiegel is a trim example of billionaire tech giant dressing. Rather than being fashion forward, Spiegel’s outfit of a white T-shirt and jeans, is fashion neutral, with the potential to shift into reverse.

Alongside his supermodel and beauty entrepreneur wife Miranda Kerr in an apron-style shirt from Fendi, Spiegel wears a normcore T-shirt from Louis Vuitton (the jeans are his own), but you can get the look for less from Just Jeans, or OshKosh b’gosh. 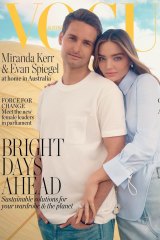 Snapchat co-founder Evan Spiegel wearing a Louis Vuitton T-shirt and his own jeans with wife Miranda Kerr in Fendi on the cover of Vogue Australia’s August issue.

Inside the issue Kerr wears a fabulous floral Marine Serre sleeveless dress, a pink crushed velvet skirt from Acne and an elaborate gold Louis Vuitton dress. Spiegel sticks to the suburban barista uniform of jeans and a T-shirt.

“Think Steve Jobs and his black skivvies, which partly operated as conspicuous casual, but also became a personal brand and a form of uniform,” says Dr Chris Cheser, senior lecturer in digital cultures at the University of Sydney. “Other tech leaders opt for T-shirts.”

“This reflects the identity of youthful university-age nerdism from which many start-ups grew. It also projects the everyday-ness of consumer technology, eschewing any intimidation of expertise.”

This tech bro uniform, along with red hoodies and grey sweaters, has become as predictable in Silicon Valley circles as ping-pong tables and bean bags in IT offices, but desperately needs an update. 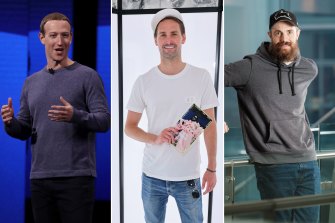 Last year fashion brands such as Gucci, Burberry and Balenciaga contributed to more than $US40 billion ($57 billion) in NFT sales globally, with a digital Glass Suit from controversial Italian designers Dolce & Gabbana selling for $US1 million in October.

In June, Zuckerberg sniffed the potential profits in the wind and dipped his virtual toe into a more mature and stylish approach to dressing at the launch of Meta’s avatar fashion store. Zuckerberg’s avatar wore a tailored grey suit from Thom Browne, a motocross-inspired outfit from Balenciaga and a slick, rather than slouchy, white logo hoodie from Prada. The toe was rapidly withdrawn when Zuckerberg appeared wearing one of his ubiquitous, plain tops IRL

“If you look at Meta it is great that they are exploring this area but are they delivering luxury fashion?” says Brad Morris, founder of Australian digital fashion pioneers Myami.

At the Melbourne Fashion Festival in March, Myami showed their Flower Bomb dress on model Duckie Thot before minting it as an NFT. Morris, who knows his way around a Gucci boutique says that many tech mentors don’t understand fashion. 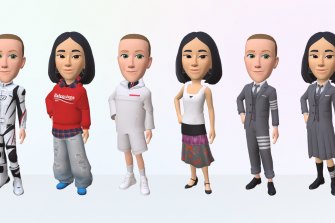 Designers Balenciaga, Prada and Thom Browne were enlisted for the launch of Facebook Meta’s Avatars Store. Avatars of Mark Zuckerberg and Eva Chen, director of fashion partnerships for Instagram, model the designs.Credit:Meta

“There are people playing in this space, and you couldn’t look at them and say that they are fashion people. When Zuckerberg cameos in the Meta promo video there is no self-expression.”

“As people invest more into the appearance of their avatars and their business’s involvement in fashion. It will have to cross over to what the tech leaders are wearing.”

That cross over is beginning to happen close to home, with Afterpay co-founder Nick Molnar creating a new tech bro blueprint in cool bomber jackets and striking high-top sneakers. When Afterpay became the naming sponsor of Australian Fashion Week, before investing in New York Fashion Week, Molnar appeared on the cover of the Australian Financial Review Magazine wearing a pale suit jacket with wide lapels from edgy label Song For The Mute.

“If these people can sell us on the idea that we need to improve the image of our avatars in the digital world, looking better in the real world is a good place to start,” Avakian says.