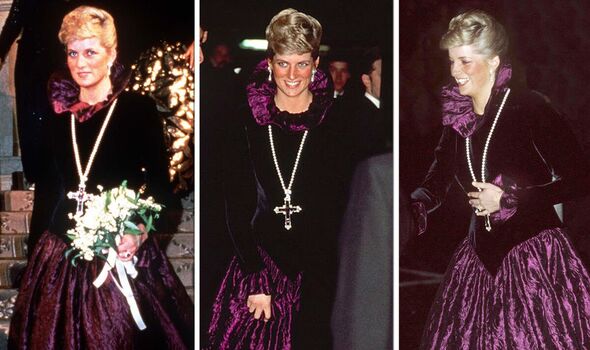 Princess Diana wore many enviable jewels during the 1980s and 1990s, but one of her most “iconic” was a crucifix pendant encrusted with several precious gems. While Diana owned much of the jewellery she wore, she also borrowed on occasion, and this particular necklace actually belonged to the former group chief executive of renowned jeweller Asprey and Garrard.

Jordan Cullen, jewellery expert and founder of Cullen Jewellery, said the pendant could fetch a “high price” when it goes up for auction soon.

Jordan said: “Diana, Princess of Wales, was known for her iconic fashion sense and love of jewellery.

“Worn several times, the Attallah crucifix pendant was one of her most iconic pieces, which she borrowed from the former Asprey and Garrard boss, the late Naim Attallah.

“The most famous occasion was during a Birthrights charity ball on October 27, 1987.”

At the Birthrights event, Diana famously paired the pendant with an Elizabethan-style Catherine Walker gown.

“It was created by the former crown jeweller Garrard – who also created Diana’s engagement ring – in the early 20th Century and features a large, stylised cross design with 11 amethyst stones and diamonds set in a pave pattern.

The crucifix pendant will be going up for auction as part of Sotheby’s annual Royal and Noble sale.

The sale begins on January 6 and ends on January 18, 2023, and the pendant is likely to “attract the attention of a wide variety of bidders”.

The necklace is understood to only have been worn by Diana and, after her death, it was never seen in public again, the auction house said.

The jewel was later passed on to Ramsay Attallah, who said: “Princess Diana and my father were friends and I remember that she often came to see him at the historic Garrard store on Regent Street, where his office was, and she would ask to borrow the pendant on several occasions. She really loved the piece.”

Kristian Spofforth, head of jewellery at Sotheby’s London, said: “Jewellery owned or worn by the late Princess Diana very rarely comes on to the market, especially a piece such as the Attallah cross, which is so colourful, bold and distinctive.

“To some extent, this unusual pendant is symbolic of the princess’s growing self-assurance in her sartorial and jewellery choices at that particular moment in her life.

“We are confident that this unique 1920s piece of jewellery by Garrard, with such an exceptional provenance and only ever worn by the Princess herself, will attract the attention of a wide variety of bidders, including royal and noble jewellery collectors, as well as fans of the Princess keen to share part of her history.”

As with any of Princess Diana’s jewellery or clothes, the Atallah crucifix pendant is expected to fetch a staggering sum due to its association with the late royal icon.

Jordan said: “The Attallah crucifix pendant has a strong connection to Diana and is likely to greatly interest collectors of royal and historical memorabilia.

“It is expected to fetch a high price at the upcoming Sotheby’s auction, with estimates ranging from £80,000 to £120,000, but may fetch even higher.

“It is important to note that the value of any piece of jewellery can vary depending on a variety of factors, including its rarity, condition, and provenance.

“The Attallah crucifix pendant is likely to be of particular value due to its historical significance and association with Diana.”