LONDON — In Greek myth, when Pandora opened her box, she let all the evils out into the world. Just one thing was left inside: hope.

The Danish jewelry group of the same name, which first became a global success story 15 years ago with its distinctive customizable sterling silver charm bracelets, has been increasingly dependent on hope in recent years.

Beginning in late 2016, sales slowed in both China and the United States amid weak demand for new products. Its shares on the Copenhagen stock exchange lost two-thirds of their value in a 16-month period, an activist investor continued calling for a sale and a string of departures by top management all came together to prompt a major restructuring in recent months, Pandora’s second in less than a decade.

Now the group — which still sells about 100 million pieces of jewelry in more than 100 countries each year, making it the largest jewelry maker in the world by product volume — says it has a sparkling turnaround plan to regain some of the brand’s lost luster.

Following the April appointment of Alexander Lacik as its new chief executive, the Copenhagen-based brand entertained 600 guests to a lavish daylong event in Los Angeles, painting downtown streets a bright pink — its new signature color — to showcase efforts toward a brighter next chapter.

A host of new Pandora ambassadors, including the models Halima Aden and Georgia May Jagger, were introduced to the crowd of editors and social media influencers; weeks before, the company had announced the high-profile signing of the “Stranger Things” actress Millie Bobby Brown in a similar role.

A new logo and fresh branding approach also were debuted, and the company said it would be redesigning its 2,700 retail stores and online platforms.

And, following a deal with Warner Bros. and Disney, collections of Harry Potter and “Frozen II” charms are being prepared, along with a new Me line aimed at Generation Z consumers. The brand’s website already features a new O pendant that aims to capitalize on the trend for layered necklaces and provide a new way to display charms, and there is an ambitious 121-piece Autumn collection inspired by magical woodlands. Most pieces continue to be priced at less than $75.

The mood at the launch event was upbeat. But will this latest effort — the most expensive market investment drive in Pandora’s 27-year history, with about 2 billion Danish krone, or $296 million, in spending this year alone — be enough to revive its fortunes?

Mr. Lacik, 54, a Swede and an industry veteran with experience at consumer goods companies like Procter & Gamble and Reckitt Benckiser, said he felt cautiously optimistic about the brand’s prospects.

“This is a big and ambitious turnaround effort, without question, but Pandora’s problems are fixable. If I didn’t think we could do this, then I wouldn’t have taken on the job,” he said over a juice late last month in London, where he was meeting with investors. “We’ve done a lot of work on what went wrong and think we have identified the biggest single issue, which was largely self-inflicted: brand relevance today, or a lack thereof. Los Angeles marks the start of a two-year effort to get back what we lost.”

There was a time, Mr. Lacik said, when lines outside some of Pandora’s stores would stretch around the block. Sales increased more than tenfold from 2007 to 2017 as the brand found a relatively unoccupied market niche between the cheap accessories found in stores like H & M and more expensive jewelry from the likes of Swarovski and Tiffany & Company.

But over time, Mr. Lacik said, executives’ focus moved from the jewelry to the ambitious scaling of Pandora’s retail store network, a decision that came with a high cost as the trinkets started to lose their charm. “We stopped giving many customers what they wanted and really thinking about what our brand purpose was, which has proved problematic,” he said, downplaying the impact of the many competitors that arrived in the affordable jewelry market during the period, fueled by the rise of social media platforms like Instagram.

“After some soul searching,” he said, “we’ve worked out what we need to be: a brand that gives a voice to people’s loves, be that people, passion or simply self-expression.” Pandora has offered a full jewelry line but its roots always have been in customizable and collectible charms that people could mix and match and make their own, Mr. Lacik said, unlike its rivals whose products were largely rooted in allusion and associations to a particular aspirational lifestyle.

“Pandora provides you with the canvas and some brushes and inspiration, but ultimately you create the picture,” he said. “You don’t define Tiffany & Company. Tiffany defines a space and you can choose whether to partake in it or not. More consumers than ever, of all ages and backgrounds, just want to stand out from the crowd. 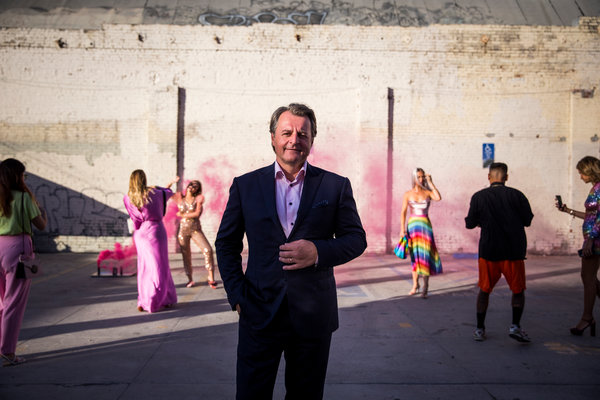 “Our point of difference should be our ability to offer personalization and co-creation. And philosophically I’d like to be in a place where most of our jewelry has a connection to this idea of collecting, as opposed to one-off sales.”

There were some positive signs in the company’s second quarter results, reported last month. Pandora delivered a smaller decline in operating profit than the market had expected, but reported that it had begun cost savings, buying back old inventory, continuing a redundancy program, closing underperforming stores and reducing promotional activity. The changes reassured investors, who returned $1 billion to Pandora’s market value, reported to be 30 billion krone.

At a time when the global jewelry market is big and growing, some analysts note that the Pandora business model is not fundamentally flawed: The brand controls its own manufacturing in Thailand, which allows it to bring products to market quickly and to melt and recycle unused jewelry, and it operates its own store network.

Others said they were impressed by Mr. Lacik and his approach. “The new C.E.O. is off to a good start vis-à-vis analysts, presenting clearly and easily,” Frans Hoyer, an analyst at Handelsbanken in Stockholm, said in a client note. “We noted in particular his ruthless honesty regarding the timing of benefits from the brand relaunch effort, which will be gradual over the next two years.”

Mr. Lacik said the Pandora job would be the last big effort of his career and that, after decades of working outside Scandinavia, he planned to go out on a professional high by reinvigorating one of the region’s best-known consumer brands, despite all the challenges.

“We have hope, of course,” he said, “But our analysis is right on what has gone wrong, there is a solid plan on the table and we also have the money in hand to fix it. So hope, yes, but we also have much more than that.”

Elizabeth Paton is a reporter for the Styles section, covering the fashion and luxury sectors in Europe. Before joining The Times in 2015, she was a reporter at the Financial Times both in London and New York. @LizziePaton