A PREMATURE baby born weighing just 1lb 10oz has defied the odds to celebrate her first birthday  – despite being so small on arrival she was kept alive in a FREEZER BAG.

Miracle baby Amina was so tiny and fragile when she was born 16 weeks early that medics had to improvise by placing her in clear plastic sandwich bag – which mimicked her mother's womb – to keep her warm. 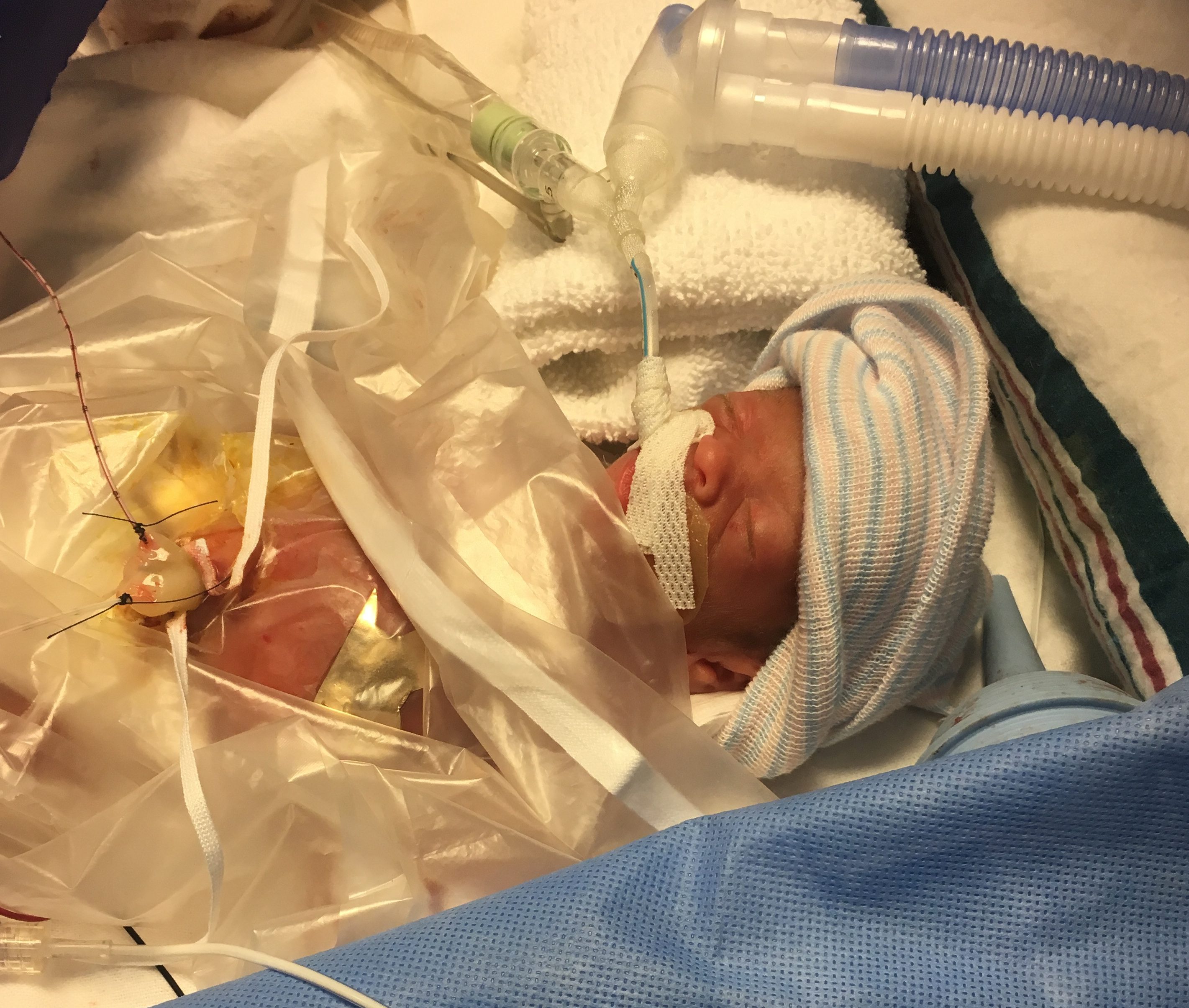 She had an open valve in her heart that wasn't closing and a bleed on the brain, but after spending 76 days in hospital, the little girl was able to go home to Chicago, Illinois, USA, with her loving parents.

Mum Taylor Dobson, 24, a beautician, said: "We thought Amina might not make it, so to be here celebrating her first birthday is so special and we feel so lucky.

"When she was born, it was a terrifying time. She was so tiny.

"She's been through so much – she's our little miracle." 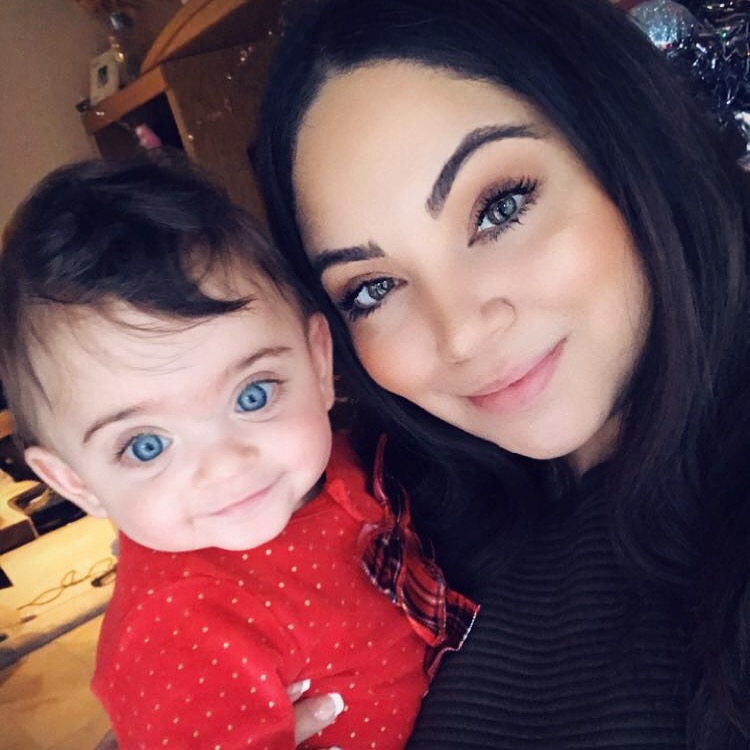 Amina was born at 24 weeks and four days on 23rd February 2018 after an emergency c-section.

Taylor said: "She was born early due to me having an incompetent cervix.

"The night before Amina was born I was admitted to the labour ward and told that I was having contractions, but that they would try to stop them by using magnesium for the next 24 hours.

"They assured me that it should stop the labour process from happening.

"I was admitted around 5pm and my contractions kept getting closer and closer all night long.

"By 9am my doctor came in and did an ultrasound of Amina saying that she was actually kicking herself out of my cervix.

"They told me I had an infection and that she needed to be delivered via emergency c-section immediately or she was at risk of catching it too.

"I was on the surgical table getting my epidural and praying that she would survive and be OK.

"I remember looking up at the metal light above me and seeing her reflection as they pulled her out of me, she didn’t cry or make any sounds. 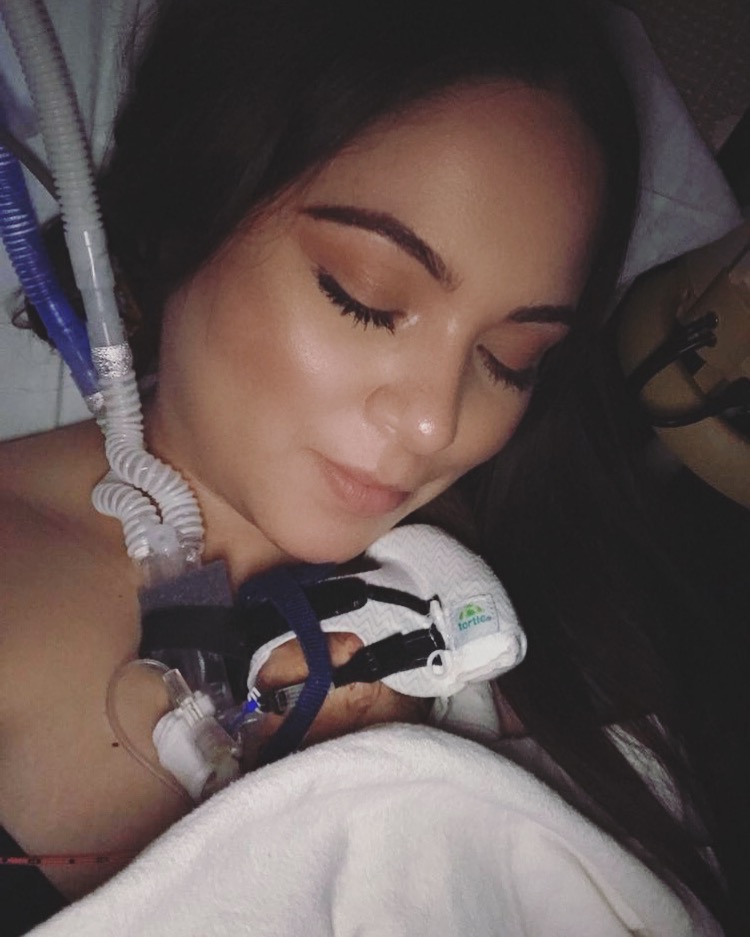 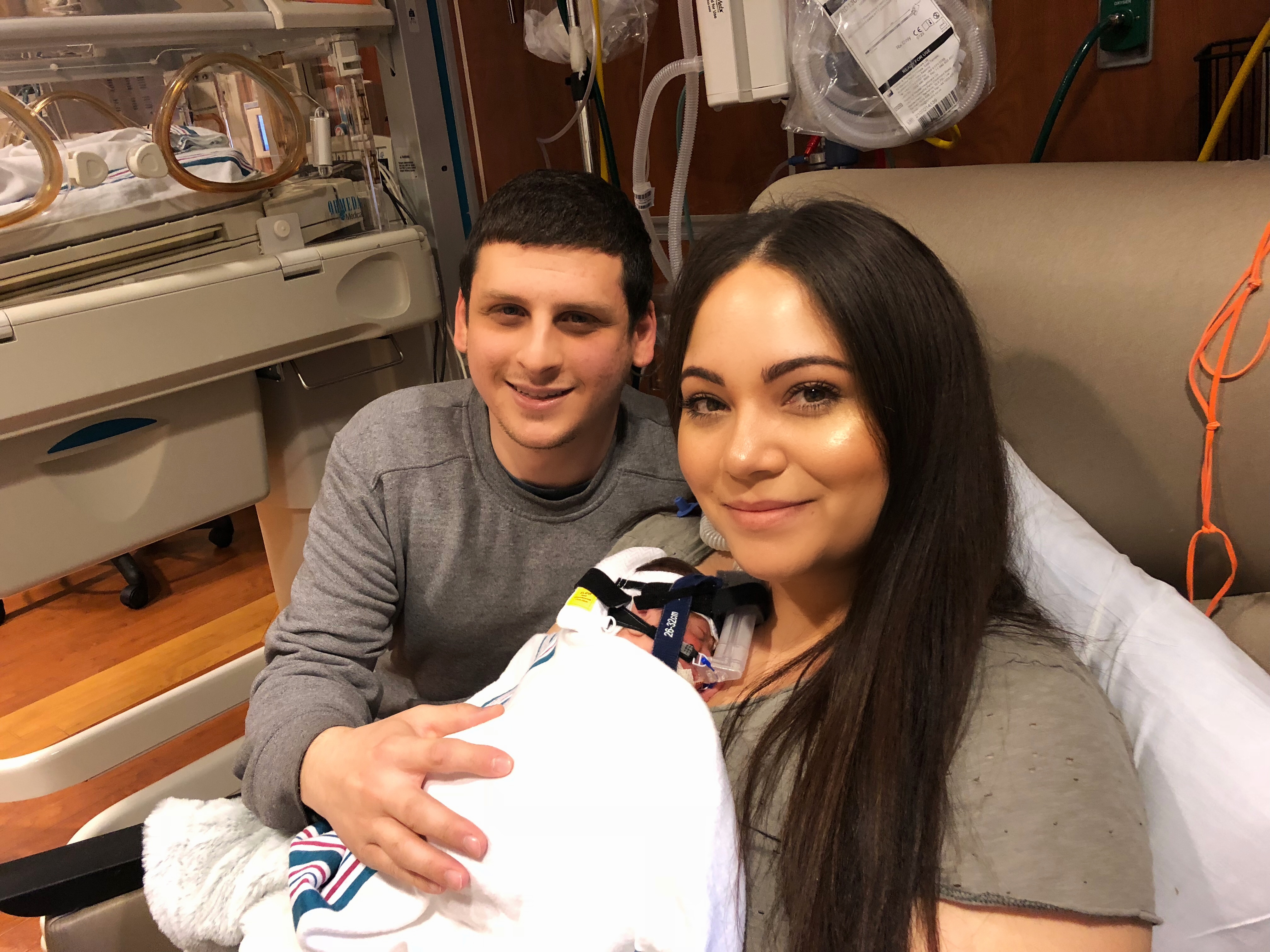 "She was immediately taken from me and hooked to wires, monitors and breathing tubes.

"She was placed in the plastic sandwich bag to keep her warm because it helps mimic the mum's womb, and she was moved to the NICU."

Taylor and her partner, Dahoud Maizer, were unable to see their newborn until she was stablised.

She said: "For the first three days of her life I couldn't see her, let alone touch or hold her.

"On day four I held my baby for the first time doing skin-to-skin. It was the most amazing feeling in the world.

"Amina spent five days intubated with a ventilator before moving to a CPAP breathing machine.

"After she was on CPAP, I was able to hold her and do skin-to-skin every day. I would make sure I came to the hospital at least two, sometimes three or four, times a day.

"Amina did amazingly well in her first few days – they call it the 'honeymoon stage' where things can appear really good, then go bad." 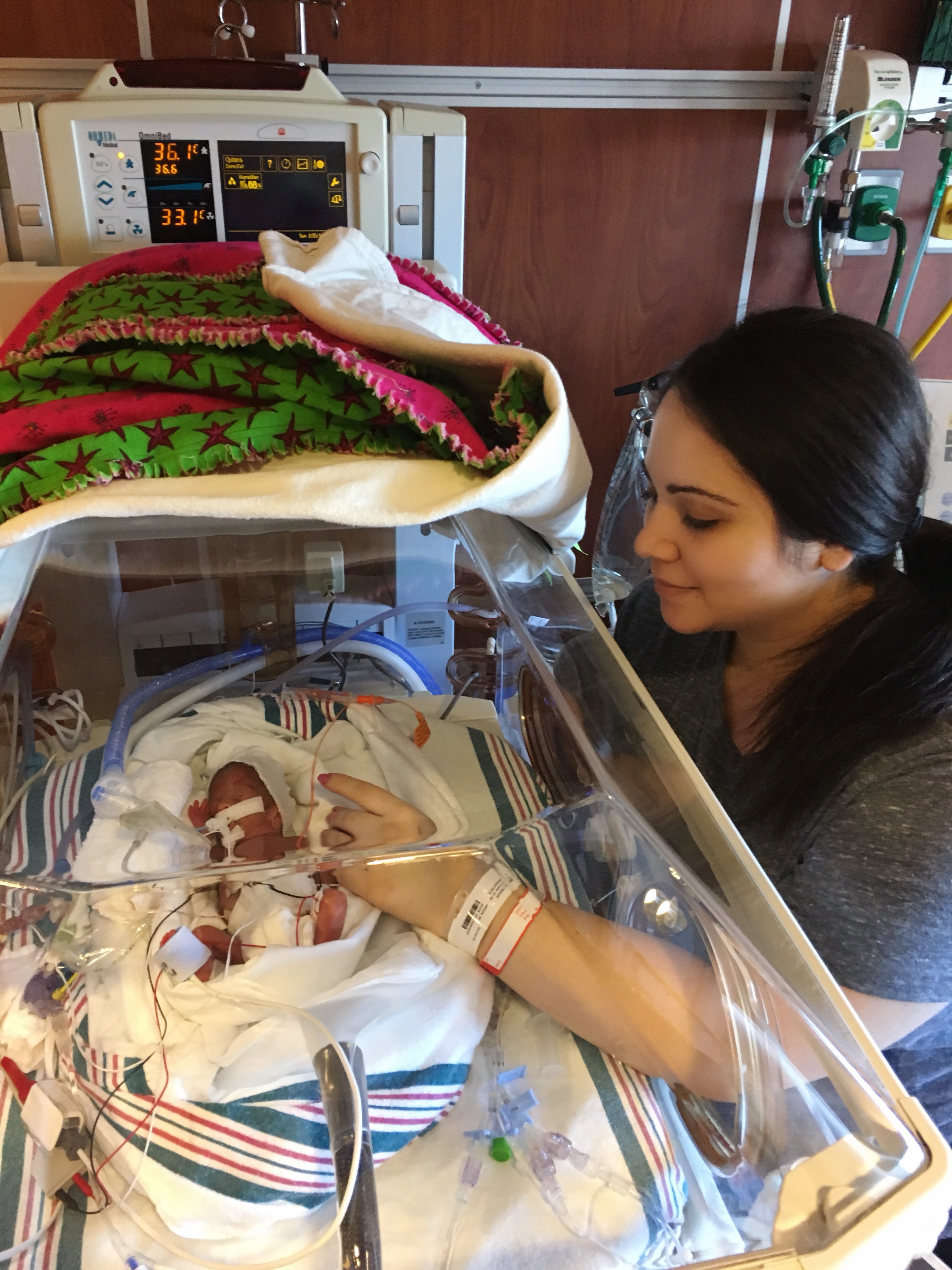 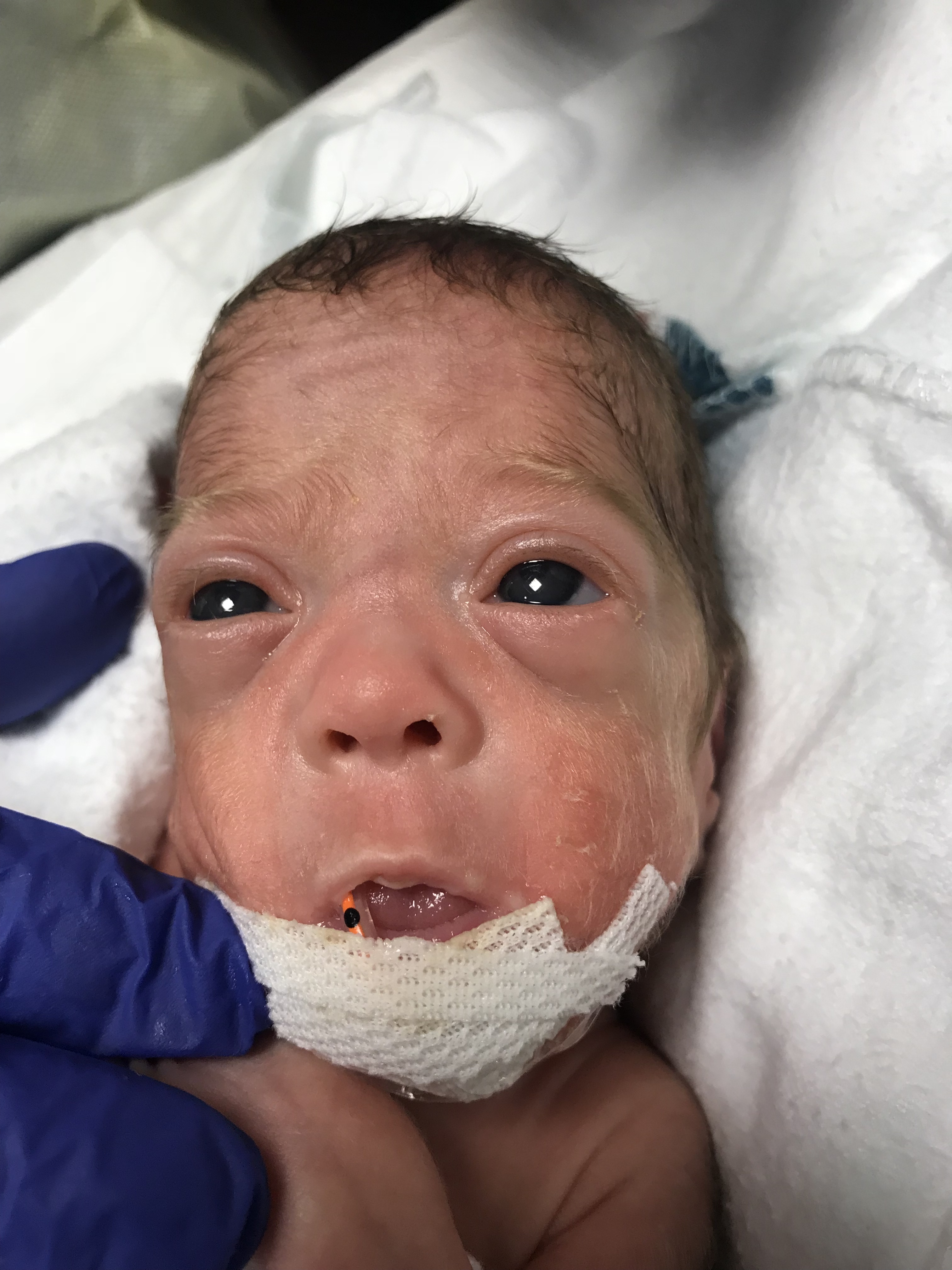 The family were then giving the devastating news that their daughter had PDA – an open valve in her heart that wasn't closing – due to being so premature and a stage two brain bleed on the left side that wasn't healing after the delivery.

Taylor said: "The doctors kept a close eye on her PDA and brain bleed and within a couple months they both healed on their own.

"The last couple of steps before she could come home was getting her to breathe and eat on her own.

"She exceeded the doctors and nurses expectations and she was breathing and eating on her own a month before her due date.

"I was not expecting to come into the NICU one day and the nurses to tell me that in a couple days my baby would be ready to go home – she was only 34 weeks gestation at the time.

"She came home at 35 weeks gestation and was only 3lbs 7oz.

"Since she’s been home she was thrived in every single way possible.

"Amina no longer needs to see a cardiologist, optimologist, or any speciality doctors.

"She is now almost one and healthy as can be."

Why is being born premature so dangerous?

A full term pregnancy is considered anything from 37 weeks on, but eight out of every 100 babies are born prematurely.

A premature birth is anything before the 37th week, and preterm babies will often need special care and support as they are not yet fully developed.

There are three categories to preterm babies: those born under 28 weeks are extremely preterm; between 28 to 32 weeks is very preterm; and anything from 32 to 37 week is moderate to late preterm.

One of the most premature babies to be born and survive is Amillia Taylor, born in 2007.

Amillia defied all odds when she was born at just 21 weeks, weighing less than 10oz and only nine-and-a-half inches long.

She was born two weeks before the legal time limit for abortion, which is 24 weeks.

For babies born under 22 weeks, the survival rate is effectively zero.

There are a huge amount of risks associated with being born so early, as often babies' organs and systems are not yet fully formed.

They may have health and development problems as they haven’t developed enough in the womb.

Tina's gorgeous premmie Noah weighed less than 2lb when he was born… but look at him now.

And these amazing twins arrived weighing just 1lb and spent months in hospital, but are now thriving.