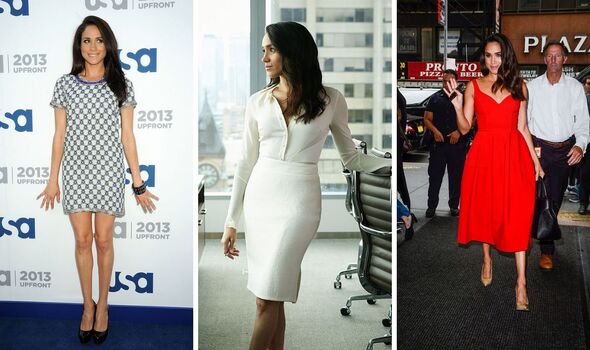 In her acting days, Meghan Markle played Rachel Zane in legal drama Suits between 2011 and 2018, making her way through many a costume. But in her free time off camera, the actress went for more casual styles.

Meghan always looks flawless and put together, whether it’s out and about with Harry or at an appearance.

Her style may have changed a little since becoming a royal and a household name.

However, the now Duchess was equally as stylish during her Suits days, when she played fashionable paralegal Rachel Zane.

Working at a top law firm, Meghan’s character Rachel was kitted out in smart outfits including many crisp white shirts, fitted pencil skirts and bodycon dresses.

But how did her on-screen style differ from her street style?

In conversation with Glamour in 2017, Meghan revealed that her “go-to” style is pretty relaxed and understated.

She stated: “On a normal day, I love a shift dress with flats and a little cropped jacket.

“That for me is my travel wear if it’s not too chilly – you can throw a scarf over your legs if it’s cold on the plane!”

According to Who What Wear, a shift dress is a short dress that hangs straight down from the shoulders with clean, simple lines, hanging loosely without a fitted cut.

Despite her fabulous figure – down to her healthy lifestyle and regular yoga and pilates – the actress admitted that she preferred looser fits when she’s not playing a part.

However, due to some self-confessed proportion issues, she encounters one problem when it comes to finding an outfit.

She said: “As I’ve gotten older, I like longer dresses, but my legs come up to my ears and I’m not very tall, so when I wear a short skirt I’ve got to be really conscious.”

She also revealed that she likes to keep it simple with “monochromatic” looks and tonal dressing.

The late Queen Elizabeth II’s wardrobe was filled to the brim with bold, monochromatic co-ords in all colours of the rainbow.

Kate, Princess of Wales is also a fan of monochromatic looks and tonal dressing.

According to Meghan, her own style was able to influence her character – “I don’t generally wear prints, and neither does Rachel now”.

When asked what she would wear for a dinner date night, Meghan kept it simple with an answer of “jeans, a nice top and a blazer”.

She shared that her style secret was tearing out pictures – from magazines, supposedly – of different looks to try out.

While it was not a dinner date, Meghan stepped out at the Invictus Games 2020 on April 17, 2022 wearing a pair of skinny denim jeans and an off-white blazer.

She paired this look with camel coloured pumps and wore her hair in loose waves for the perfect combination of put together and relaxed.