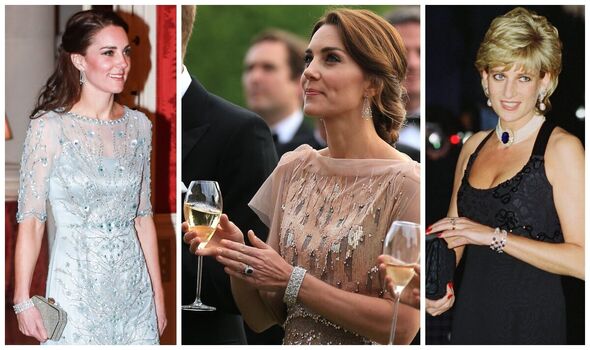 When Kate Middleton married into the Royal Family, she inherited a large number of royal jewels. One such jewel she inherited was a bracelet previously worn by the Queen Mother.

Before this, the bracelet was worn as a choker by Queen Mary, the late Queen Elizabeth’s paternal grandmother.

Just like Princess Diana remodelled a sapphire brooch from the Queen Mother into a choker, Kate wore the historic royal jewel in a very different way than Queen Mary.

Maxwell Stone, a jewellery expert from Steven Stone commented to Express.co.uk about this jewellery trick she learnt from Princess Diana.

He said: “Kate’s diamond bracelet is an incredibly historic piece of jewellery as it originally belonged to Queen Mary.

“Though when it was in Queen Mary’s possession, it was part of her collection of diamond chokers.”

The expert expanded on the history of the jewel and how it landed in Queen Mary’s possession.

Mr Stone continued: “Created at some point during the 1920s, it’s unknown whether the choker was originally designed to be worn as a bracelet or if it was modified later.

“But with the Princess of Wales having worn it as a bracelet on multiple occasions, it’s unlikely that it will be worn as a choker in the near future.”

Mr Stone explained: “It’s heart-warming to see that Kate has followed in the steps of her late mother-in-law, Princess Diana, when it comes to wearing jewellery in her own unique way, knowing exactly how to make each piece in her collection stand out.

“From re-modelling brooches into necklaces, to wearing chokers as headbands, Princess Diana set some huge trends and was always showcasing her jewels in unique ways.”

Mr Stone gave a rough estimate of how much this choker bracelet would cost now in 2023.

He added: “Composed of diamond bars in an Art Deco design, I’d estimate this particular piece to be worth a whopping $345,000.”

After Queen Mary’s death in 1953, the Diamond Bar Choker was not publicly seen until 1975, when the choker was worn as a bracelet by the Queen Mother.

This was in a series of portraits taken by Norman Parkinson to mark her 75th Birthday.

After her death in 2002, the bracelet was inherited by Queen Elizabeth but it remained unworn.

In 2015, the Queen loaned the Diamond Choker Bracelet to Kate, who first wore it with the Lotus Flower Tiara and the Queen’s Wedding Gift Bracelet at the Chinese State Banquet that year.

In 2016, the bracelet was worn at the East Anglia’s Children’s Hospices “A Taste of Norfolk” Gala at Houghton Hall, as well as at the Gala Dinner hosted by the British Ambassador to France, during the Prince and Princess of Wales’ visit to Paris in 2017.

The latest appearance of Queen Mary’s Diamond Choker Bracelet came in 2018 when the Princess paired it with Queen Mary’s Lover’s Knot Tiara and the Collingwood Pearl Earrings for the Diplomatic Reception at Buckingham Palace.