‘We miss you!’ Victoria Beckham cuddles shirtless son Brooklyn in sweet snap taken by his fiancée Nicola Peltz after putting on a leggy display in a stylish lace skirt

Victoria Beckham shared a sweet family snap alongside her eldest son Brooklyn via Instagram on Saturday.

The fashion mogul, 47, wrapped her arms around the aspiring photographer, 22, in a picture taken by his fiancée Nicola Peltz and admitted she missed him.

Putting on a stylish display, Victoria slipped into a black-and-gold brocade dress, while she appeared to be midway through her beauty regime as she had under eye patches on. 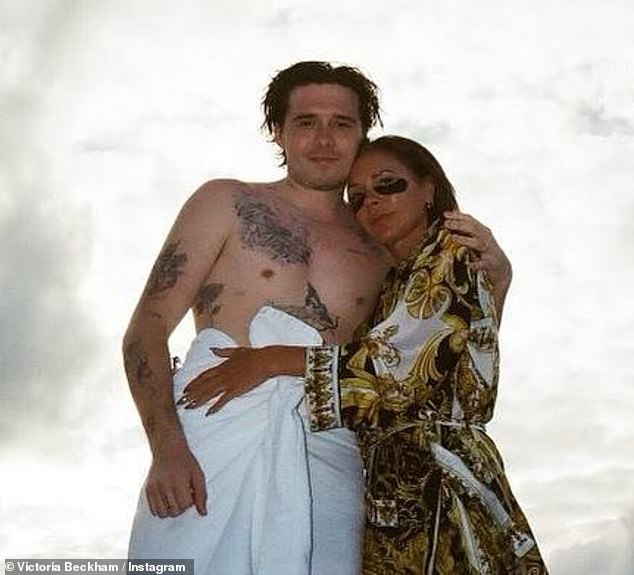 ‘We miss you!’ Victoria Beckham cuddled shirtless son Brooklyn in sweet snap taken by his fiancée Nicola Peltz, which she shared via Instagram on Saturday

Seemingly on holiday together, Brooklyn showed off his tattoos by going shirtless, and he wore a towel wrapped around his waist.

Lamenting how her son has been living in the US with Nicola during the pandemic, Victoria wrote in the caption: ‘We miss you @brooklynbeckham and @nicolapeltz! (on photography duty!) kisses xx’

On Friday, Victoria put on a leggy display when she shared a stylish picture on social media of her modelling a dark blue skirt.

The outfit highlighted her slender legs thanks to the skirt’s front-slip that had a white lace trim, and she boosted her figure in a pair of white heels. 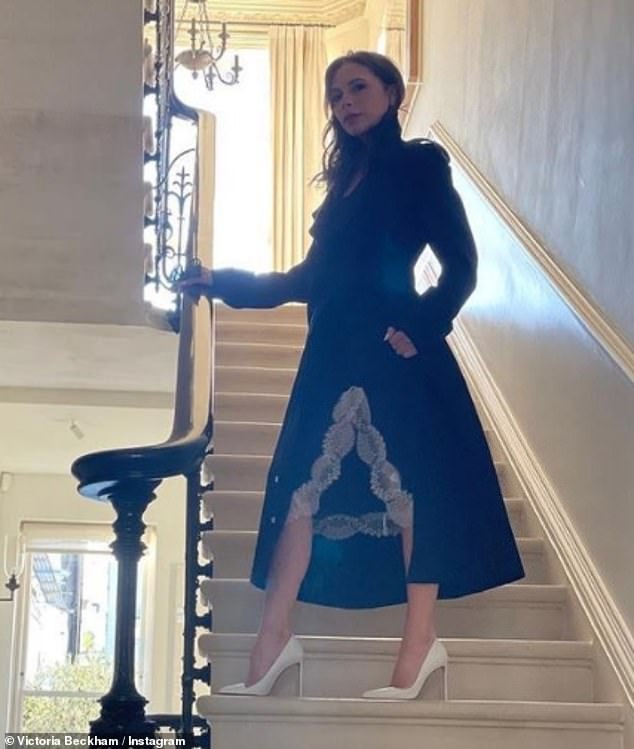 Stunning: On Friday, Victoria put on a leggy display when she shared a stylish picture on social media of her modelling a dark blue skirt

On Mother’s Day, Victoria shared a heartwarming Mother’s Day with all four kids Brooklyn, Romeo, 18, Cruz, 16, and Harper, nine, who she shares with husband David Beckham.

The former Spice Girl gushed: ‘Mum’s are so special we get celebrated twice! Happy Mother’s Day to all of you celebrating today.’

It comes after Victoria revealed the Spice Girls influenced Beyonce to become the iconic artist she is today.

She revealed the band’s message of Girl Power really resonated with Beyonce, 39, who told her about the impact they’d had. 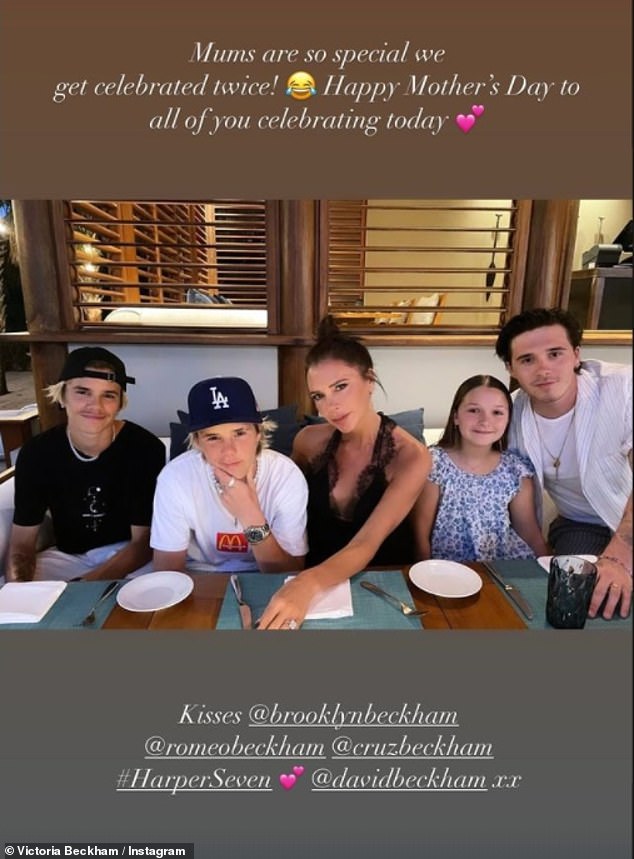 Family: On Mother’s Day Victoria shared a heartwarming throwback with her four children (L-R) Romeo, Cruz, Harper and Brooklyn as she marked the US holiday

Victoria said: ‘I met Beyoncé a few years ago, and she actually said to me, “It was the Spice Girls that inspired me and made me want to do what I do and made me proud to be a girl and proud to be who I am”‘.

She added on Dear Media’s Breaking Beauty podcast: ‘And when someone like Beyoncé, who is so iconic and was such a strong woman, says that she was inspired by the Spice Girls, I think that’s quite something.’

The Spice Girls shot to fame in 1996, they split up in 2000 after Geri (Ginger Spice) decided to leave in 1998, but they have briefly reunited over the years. Victoria decided to not join the foursome for their most recent tour Spice World in 2019.

Victoria recently insisted that she doesn’t cringe over her past make-up looks during the Spice Girls as it was all a ‘journey’ and she ‘didn’t care’ at the time.

Talking about her time in the girl band, the fashion designer even joked that her four children often comment on how ‘cool’ she used to be – to which she quipped: ‘Oh, wow. Does that mean I’m not now?’

Talking on Dear Media’s Breaking Beauty podcast alongside Sarah Creal, co-founder of Victoria Beckham Beauty, Victoria reflected: ‘You know, I’ve been so lucky to work with the best makeup artists in the industry, which has just been so, so great. 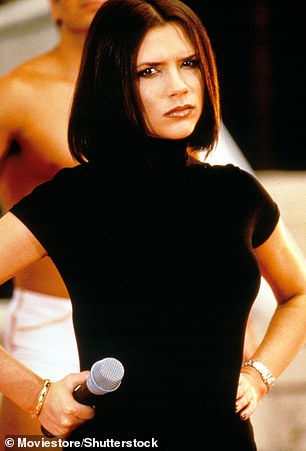 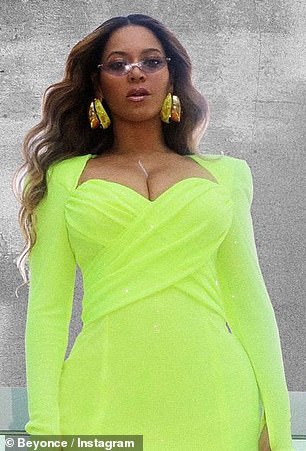 Iconic: It comes after Victoria (pictured left in 1997) has revealed the Spice Girls influenced Beyonce to become the iconic artist she is today

‘And I look back at pictures and people always say, “Oh, do you cringe at any of the pictures?” You know. Do I cringe at that heavy lip liner? No, it was, it was a journey.

‘Do I cringe at those skinny eyebrows? No, it was a journey and way too much blush, you know, we were working so hard and we were so exhausted. 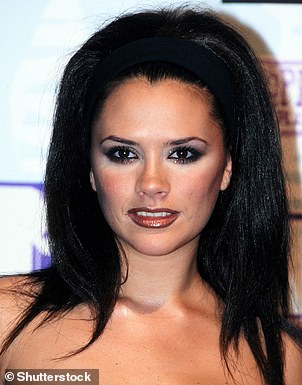 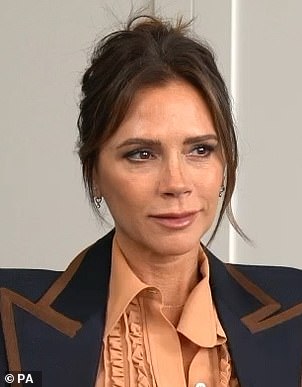 ‘Journey’: Victoria also insisted that she doesn’t cringe over her past make-up looks during the Spice Girls, (left), as it was all a ‘journey’ and she ‘didn’t care’ at the time