Una Healy has taken to Instagram to share her first ever TikTok post mere hours after ex Ben Foden welcomed a baby girl with his new wife Jackie Belanoff Smith.

The Saturdays star, 38, shared the post on Friday alongside her daughter Aoife, eight, dancing to Jawsh 685’s song Laxed.

Una’s post came as her ex-husband Ben was revealed to have welcomed daughter Farrah Abra with his wife of nine months of Jackie, who he married just two weeks after they met. 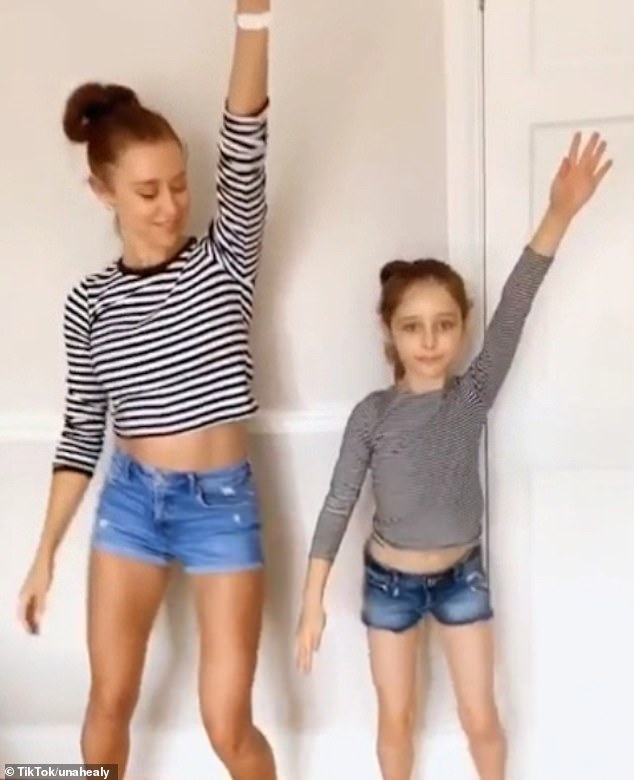 In the video, Una looked effortlessly stylish in a black and white striped top and cut-off shorts as she performed the moves in perfect sync with her daughter.

She captioned the post: ‘Just made my first #tiktok video! Aoife Belle was mad for us to do one so I said we would start off easy. Tadhg came in handy to film us.’

The post came hours after MailOnline exclusively revealed that Ben had welcomed his first child with new wife Jackie. 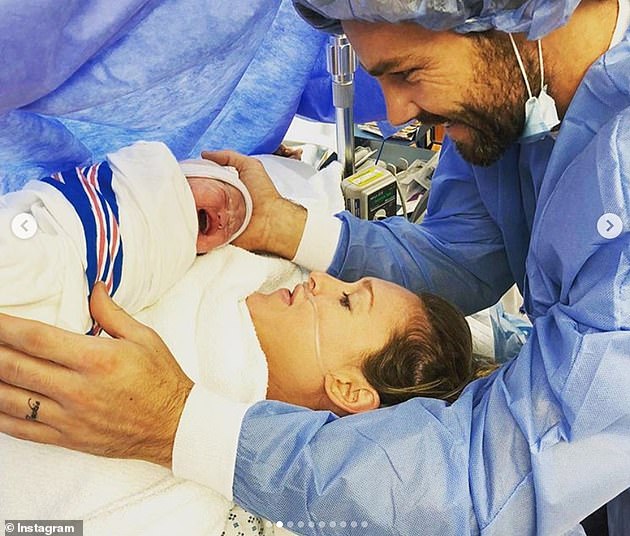 Baby news: Ex rugby player Ben announced the birth of daughter Farrah with wife Jackie on Friday after the tot was born early 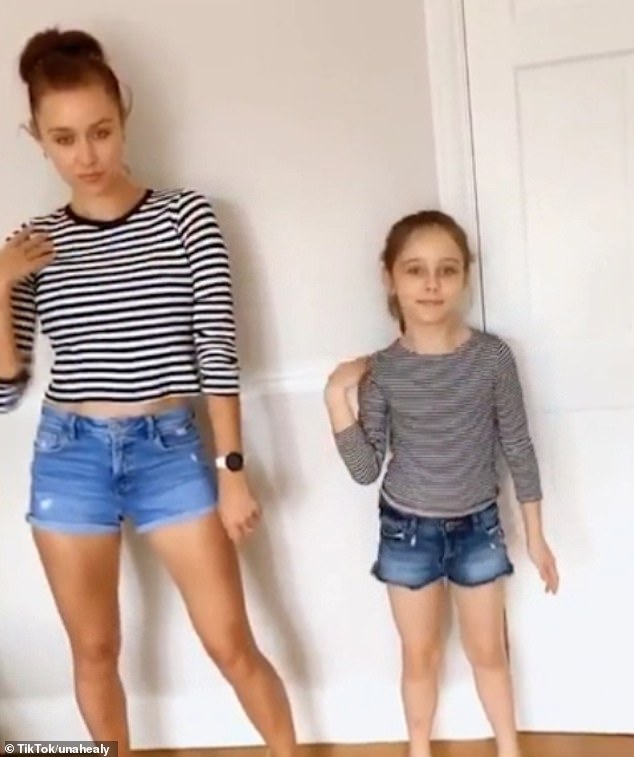 Fun: In the video, Una looked effortlessly stylish in a black and white striped top and cut-off shorts as she performed the moves in perfect sync with her daughter 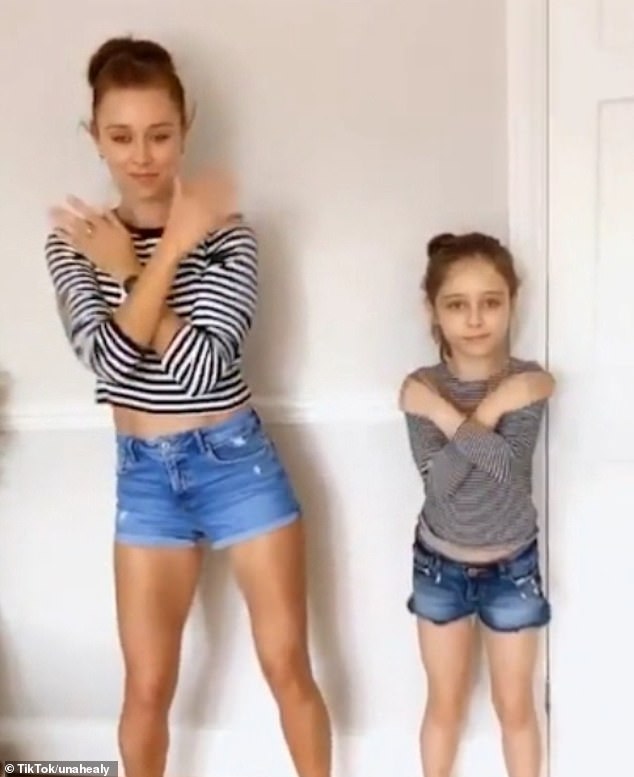 Dance it out: The Saturdays star shared the post alongside her daughter Aoife dancing to Jawsh 685’s song Laxed

The new mother posted a sweet snap of herself cradling the tot moments after she was born while Ben stood over her and revealed she was induced early after developing cholestasis.

Revealing the details of her health scare, Jackie wrote: ‘So with an original due date of June 12, a few weeks ago I developed cholestatis, which is an elevation in liver enzymes or something.

‘I was getting super itchy and blood work showed concerning levels, and it was decided I needed to induce at 37 weeks which is technically considered term.’ 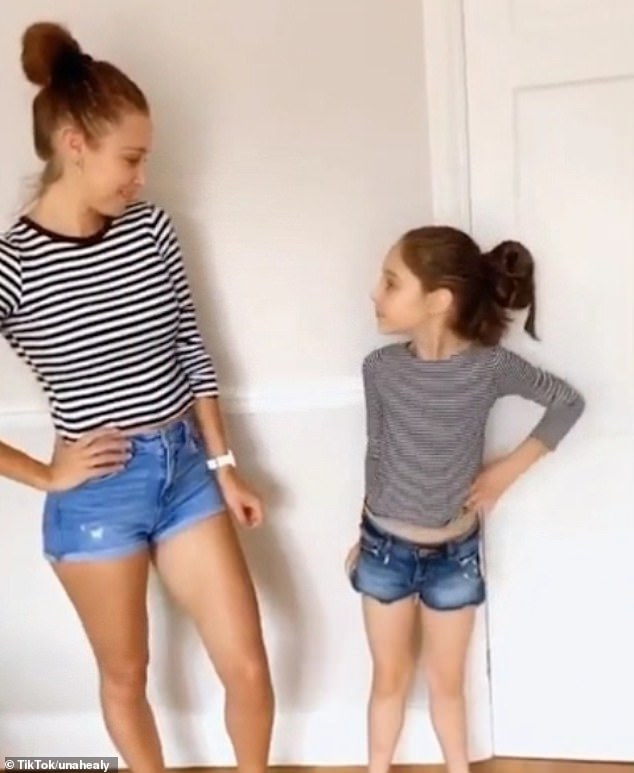 Great fun: Una told fans she finally decided to film a TikTok after weeks of pestering by her daughter

Jackie revealed she was in labour for a full day and it was Ben who cut the umbilical cord.

She wrote: ‘After 24 hours of labor, I wasn’t dilating, and she needed to be sectioned, so mom and Mark (my stepdad) scrubbed up and had her out in 30 mins.

‘(Ben cut the cord which turned out to be super short, which is probably why she wasn’t coming down naturally and helping me dilate).’ 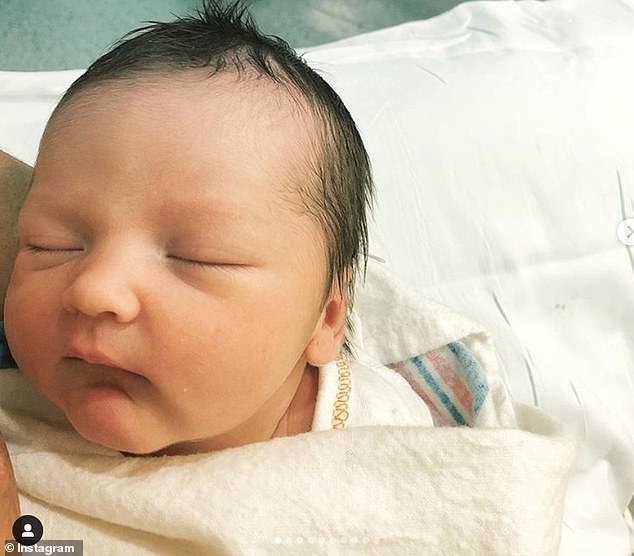 Adorable: Jackie posted several snaps of baby Farrah taken moments after she was born as she revealed details of her complicated birth

Jackie also wrote a message of thanks to all who were involved in the birth, describing it as a ‘difficult delivery’.

She wrote: ‘Lastly, I’d like to say thank you, from the bottom of my heart, to my mother, Sharon, my PA for this birth, and my stepfather, Mark, my OB, for taking such incredible care of us every step of the way, for helping us through this difficult delivery.

‘For bending over backwards for us every way they could every single day. They are the most loving supportive people.

‘And THANK YOU to the entire team at Mercy Hospital for working so hard for us around the clock, we felt so taken care of and supported and safe. Thank you.’ 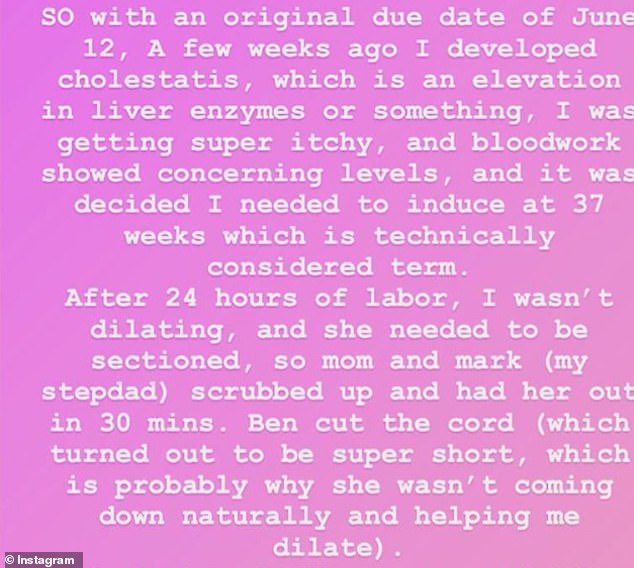 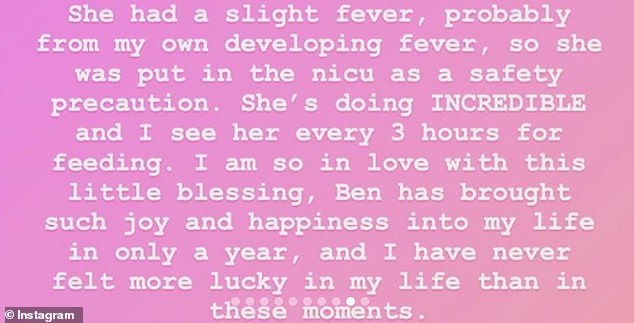 Statement: Jackie revealed Farrah was born three weeks early after she was brought into hospital to be induced 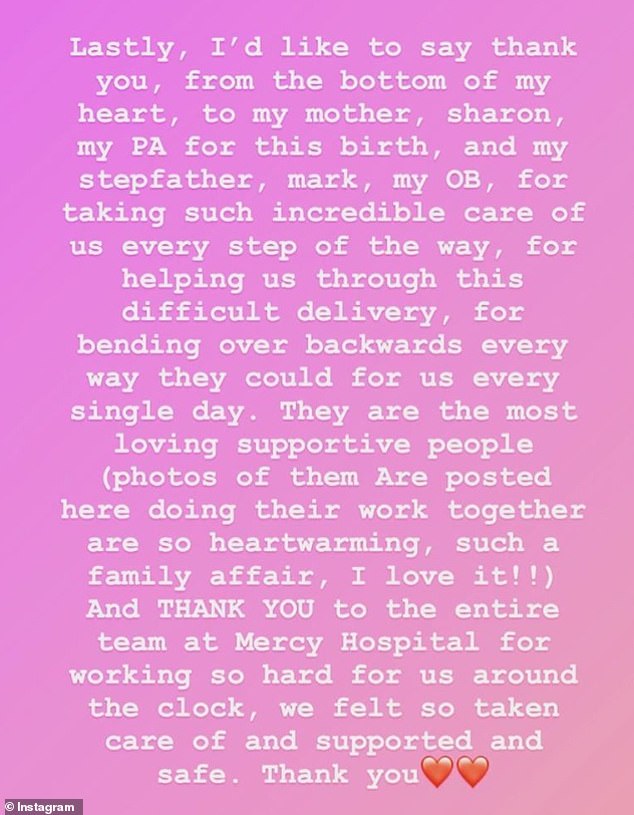 Grateful: Jackie gave her thanks to all who were involved in Farrah’s birth and described it as a ‘difficult delivery’ 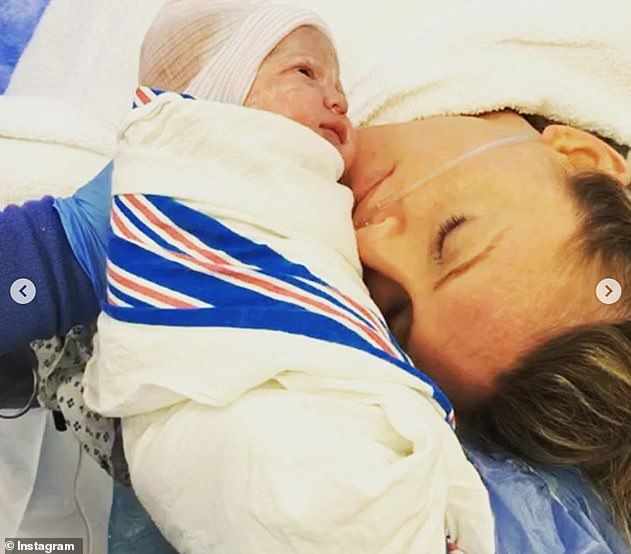 Mother and daughter: Jackie lovingly cradled her newborn daughter in one snap 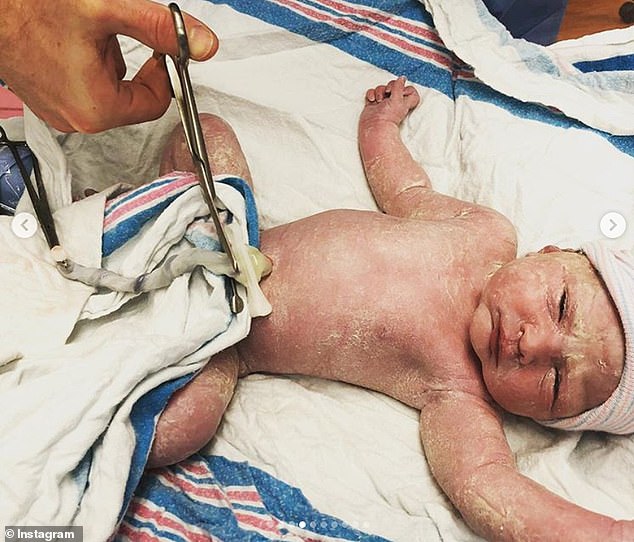 Family: Jackie revealed it was Ben who cut Farrah’s umbilical cord after the birth 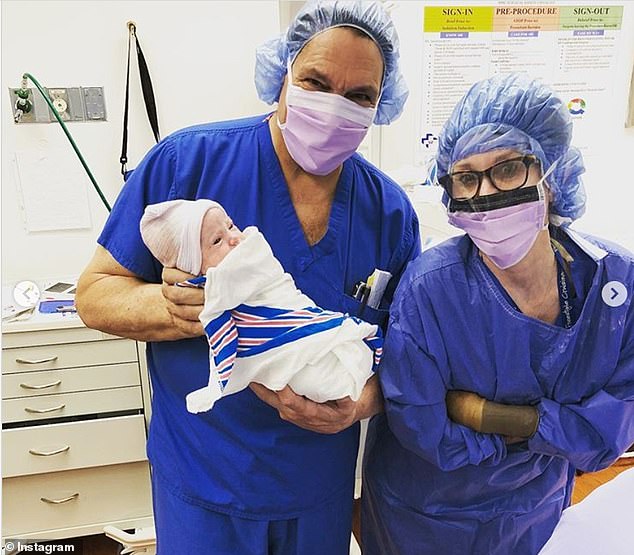 Grandparents: Jackie revealed her mother and her stepfather were on hand in the delivery room

Jackie’s post comes after a spokesperson for Ben confirmed the happy news on Friday.

The baby is the first child for the couple, who married nine months ago in August 2019, just two weeks after they started dating.

On Wednesday, Ben took to Instagram to reveal that Jackie was in labour, as he jokingly mulled the idea of broadcasting the birth live.

He took to his account a few minutes before 1am to share footage of his wife on a hospital bed as she donned a mask and was hooked up to an intravenous drip.

An hour later, Ben continued to film as his wife experienced pain while another IV drip was inserted, causing her to call him ‘a f**king a**hole’ on camera. 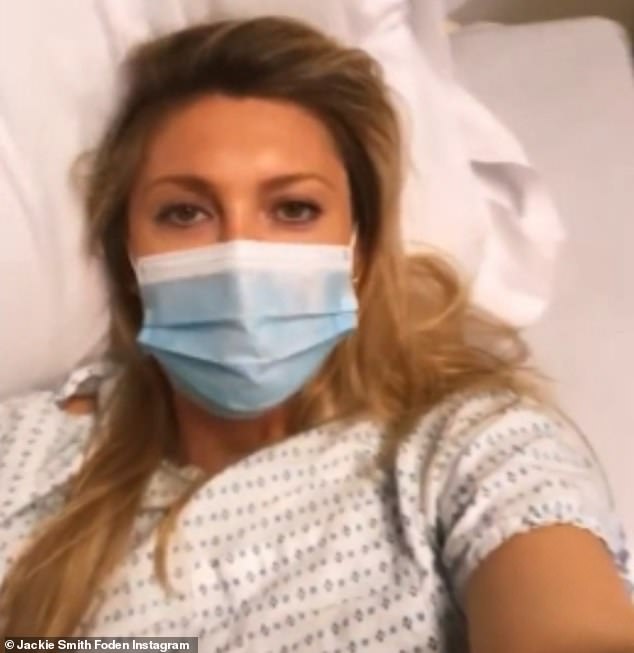 Making memories: Ben and Jackie started documenting the labour on Instagram on Wednesday 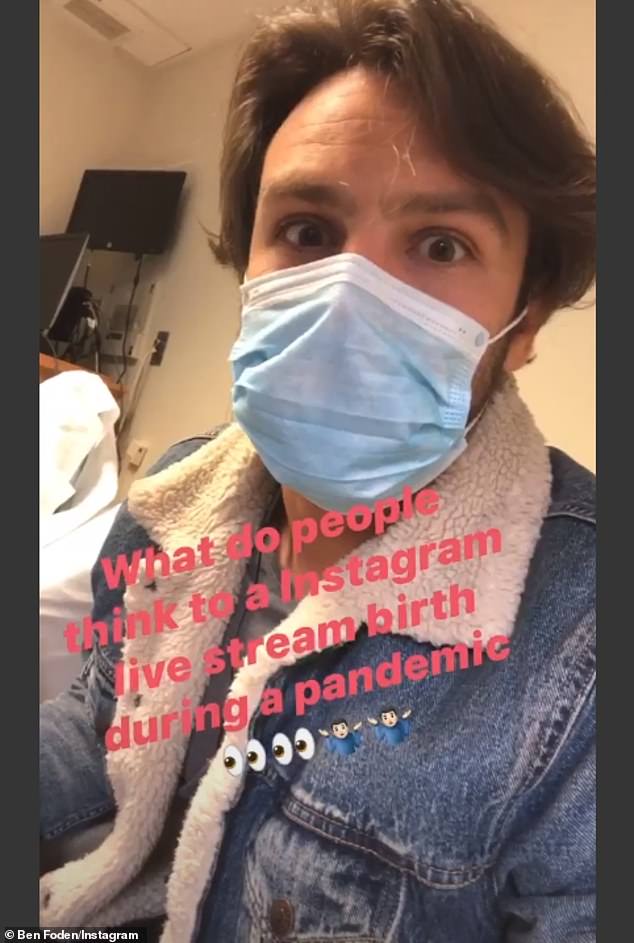 Oh, baby! Ben jokingly mulled the idea of broadcasting the birth live as the labour started

The start of the footage on Tuesday night saw Ben donning a mask and serving as cameraman, captioning the footage: ‘What do people think to a Instagram live stream during a pandemic.’ [sic]

Seemingly keen to keep things lighthearted, he added Salt-N-Pepa’s chart-topping 1988 hit Push It as the soundtrack to the proceedings.

Not to be outdone, Jackie shared footage of herself from her hospital bed, panning the lens from her own face to that of her husband’s as Young Joc’s 2006 rap hit It’s Goin’ Down served as her backing track of choice.

She also gave her medic mother an opportunity to wave at the camera as she gave the mother-to-be a coronavirus swab ahead of welcoming her child into the world. 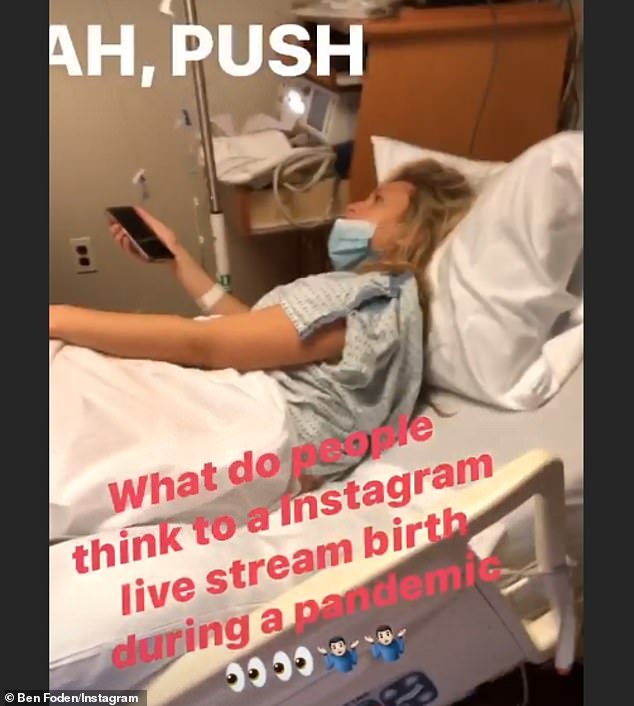 Anticipated arrival: The rugby ace had taken to his Instagram account a few minutes before 1am to share footage of Jackie on a hospital bed as she donned a mask

An hour later and things were progressing as Ben shared another video of Jackie, captioned ‘Anyone guess this first process because that ain’t where the baby comes from’.

‘Mmm she’s not a fan’ he continued as his wife called out in pain and asked for the medic to stop.

Ben explained in the next video that ‘this is the IV drip going in, we haven’t even started’ as an unimpressed Jackie noticed he was filming, calling him a ‘f**king a**hole’. 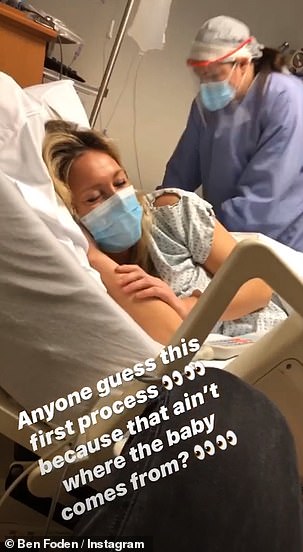 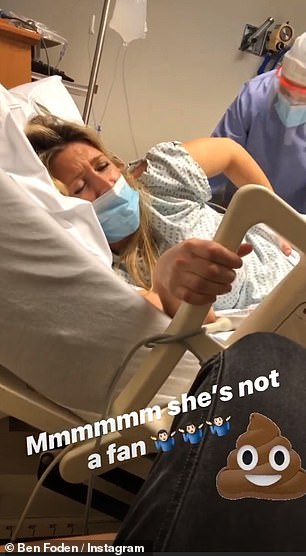 Still filming: An hour later and things were progressing as Ben shared another video of Jackie, captioned ‘Anyone guess this first process because that ain’t where the baby comes from’ 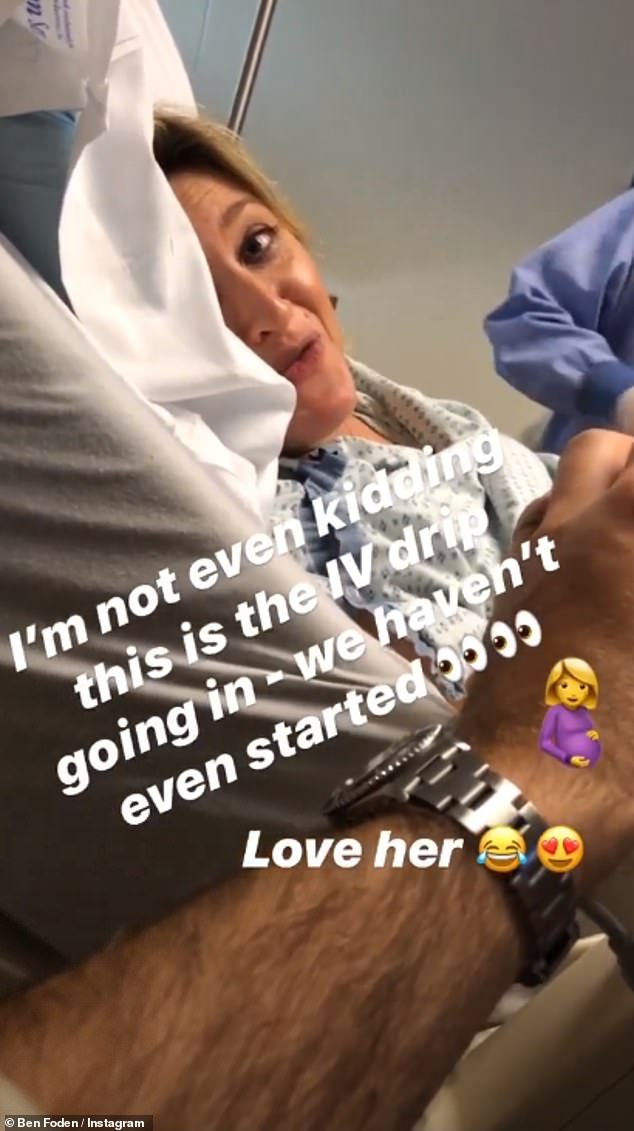 Stop! Ben explained in the next video that ‘this is the IV drip going in, we haven’t even started’ as an unimpressed Jackie noticed he was filming

In February, MailOnline exclusively revealed that Ben was expecting a child with Jackie, 19 months after his divorce from Una, 38.

Friends of the Celebrity X Factor star said he was ‘absolutely delighted’ at becoming a father for the third time.

‘Ben and Jackie are over the moon,’ a source told MailOnline at the time.

‘They’re so excited to become parents together for the first time and are looking forward to starting their new lives as a family.

‘The plan is to move from America back to the UK and raise the baby here – there’s lots to organise but they can’t wait for their new arrival.’ 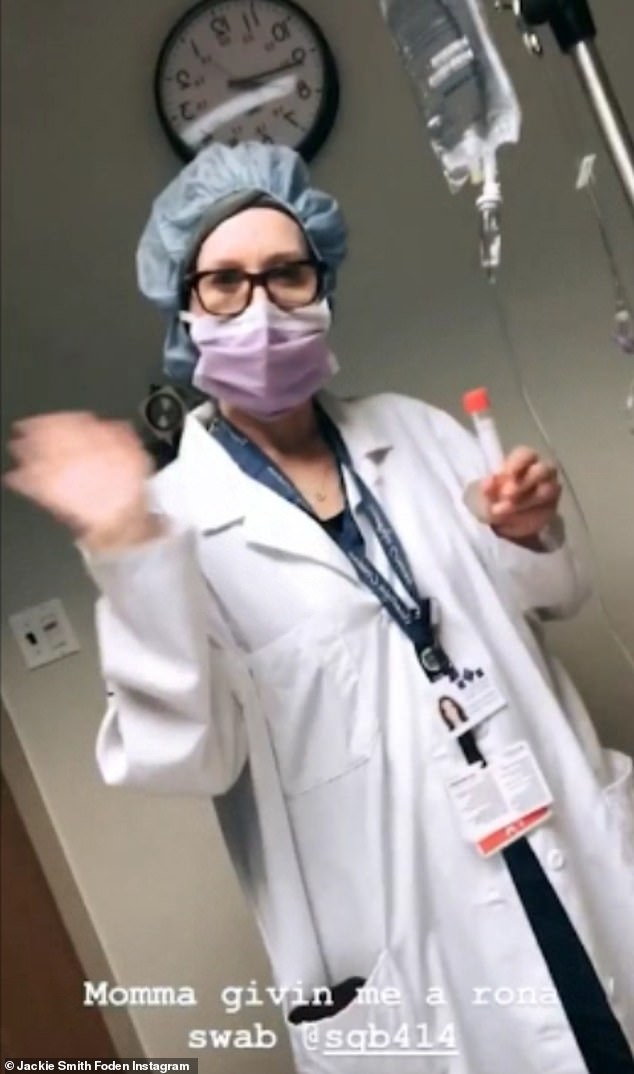 Medic: Jackie gave her medic mother an opportunity to wave at the camera as she gave the mother-to-be a coronavirus swab ahead of welcoming her child into the world

Ex-England rugby international Ben first married The Saturdays singer Una in her native Ireland in 2012, after the pair dated for four years.

The couple divorced in July 2018 after six years of marriage when Ben confessed to cheating on Una with publicist Becky Milne.

Ben married Jackie on board a luxury yacht in Nantucket, Massachusetts, in August despite the pair only knowing each other for a few weeks.

Ben revealed to MailOnline last year that he plans to move back to the UK with Jackie and buy a house together in Cheshire.

The former England full-back is supposed to be taking part in his second and final season of Major League Rugby on behalf of New York at the moment. 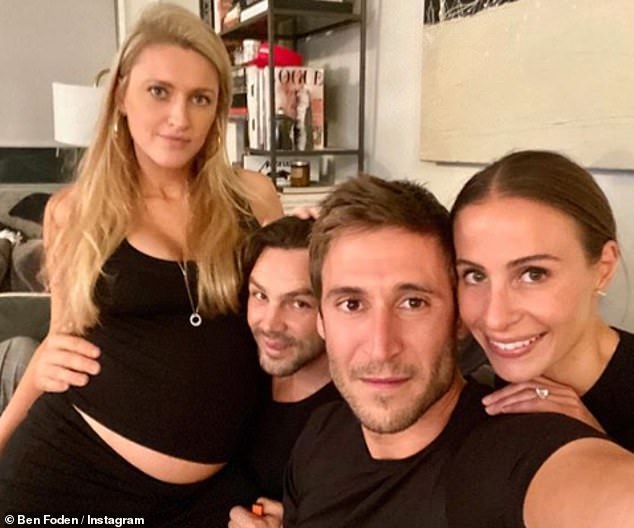 Bumping along nicely: In March, Ben shared a cosy selfie with new wife Jackie, after it was revealed they are expecting their first child together 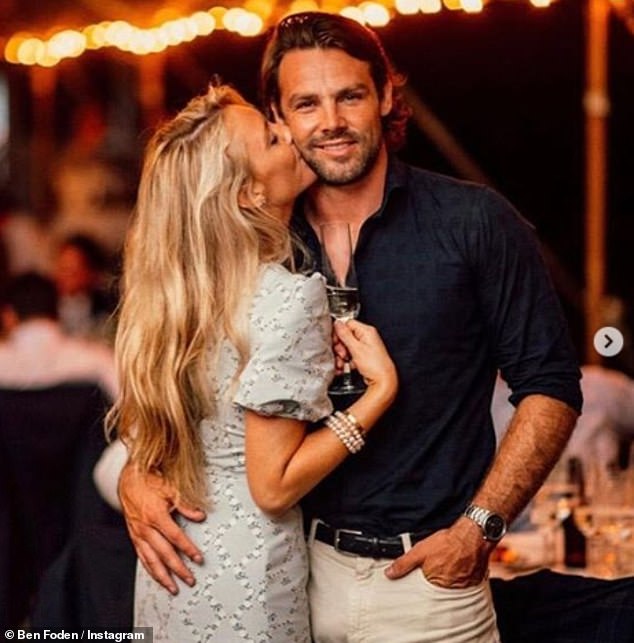 Newlyweds: Ben married Jackie on board a luxury yacht in Nantucket, Massachusetts, in August 2019, despite the pair only knowing each other for a few weeks

Instead, he and his wife spent the past several weeks isolating in quieter surroundings in nearby Connecticut, after feeling their Manhattan home.

Their unplanned move has afforded Foden time to decide whether to commit to one more campaign next year, or accept that his playing days ended abruptly, with a defeat away to San Diego on March 8.

‘I signed a two-year deal and this was my second year, but I have a visa for three years and I’m married to an American now, so I’ll be getting a Green Card,’ he told Sportsmail last month.

‘I haven’t decided yet whether I want to carry on playing. Obviously, this isn’t the way that I’d want my career to end, but in my head I thought this would be my last year, in terms of knuckling down and being a player.

‘I’m going to be 35 in the summer and maybe it is time to get out. I came here to do two years and I wanted to help get New York on the rugby map, maybe win a championship with them and go out on a high, but obviously that can’t happen now.

‘Time isn’t on my side. I’ve played this game for a long time and I love it, but my days are numbered.

‘I’ve got to have a chat with the owners and the coaches, to see if they want me to play next season, then I’ve got to speak to my wife about it, because I really did approach this as my last year.’ 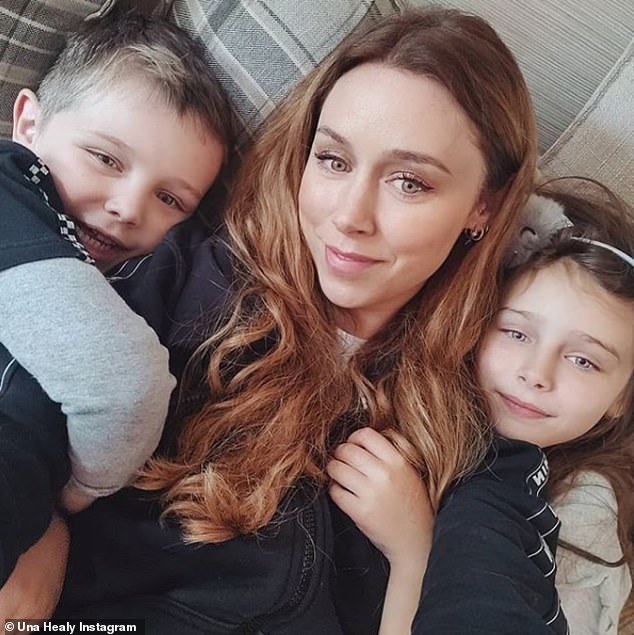