‘Feeling pretty in pink!’: Tori Spelling, 48, sheds her mommy image to glam up in daring dress and fishnet stockings for new show Messyness

But the Beverly Hills, 90210 star, 48, took some time out to look glamorous this week to promote her new MTV show MESSYNESS.

‘My new series, MESSYNESS, premieres on @mtv and airs all week long! Tune in to check me out! ⭐️,’ wrote the siren, who was dressed in pink with her long hair worn down. 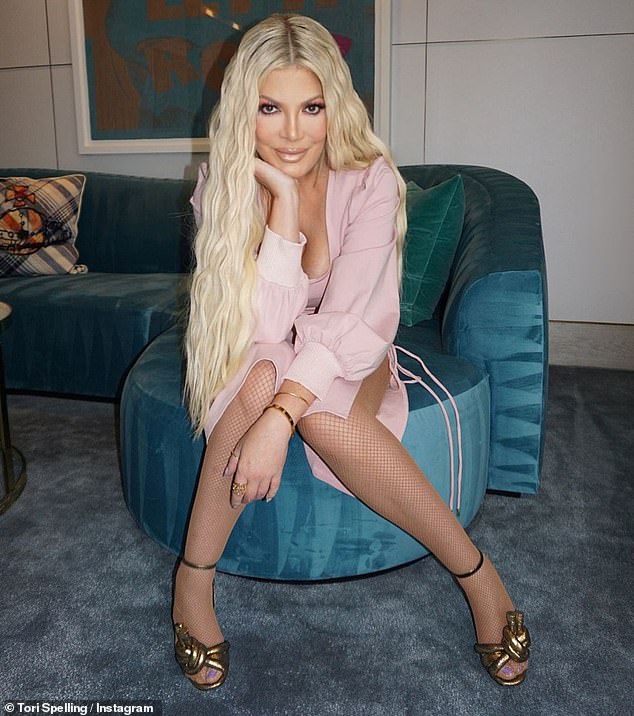 Glam goddess: Tori Spelling usually looks like a busy DIY obsessed mother of five on Instagram. But the Beverly Hills, 90210 star, 48, took some time out to look glamorous this week to promote her new MTV show MESSYNESS 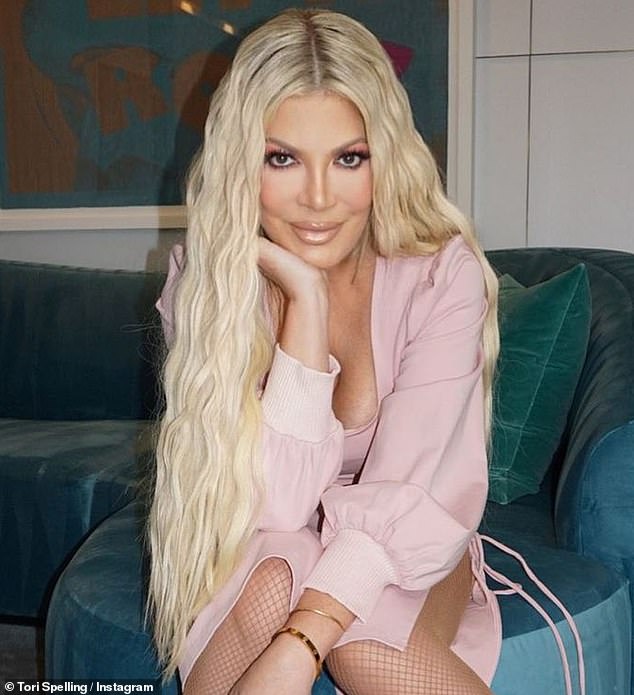 A closer look: ‘My new series, MESSYNESS, premieres on @mtv and airs all week long! Tune in to check me out! ⭐️,’ wrote the siren – who was dressed in pink with her long hair worn down – on her Instagram caption

The looker had on a pink dress with a high slit as well as fishnet stockings and bronze heels that had a knot on top as she sat on a teal colored sofa with a dark carpet.

She said her makeup was by Hailey Hoff and hair by Laura Rugetti with stylist Jasmin Whitley picking out the clothes.

In another post, Tori looks radiant in a hot pink dress with her hair down.

‘Feeling pretty in pink… Thankful for so many things today. To my amazing friend @alexisnicoleofficial for flying to LA to help me with the kids first week of school and to my amazing lady gang who got me ready for my #Messyness @mtv press tour today I ❤️you. Sometimes it does take a village and that’s ok!’ she wrote. 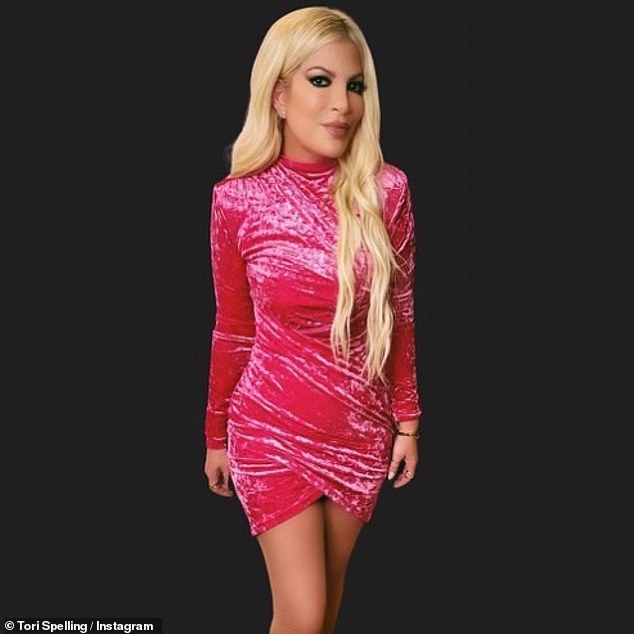 Haute stuff: In another post, Tori looks radiant in a hot pink dress with her hair down. ‘Feeling pretty in pink… Thankful for so many things today’

The show MESSYNESS is hosted by Nicole ‘Snooki’ Polizzi and her ‘messy besties,’ Tori, Adam Rippon and Teddy Ray. They talk about people having wild nights out.

This comes after Spelling said she thinks life is simply ‘too short to be too serious’.

The Inn Love star believes it’s important to prioritize having fun and to not worry about being judged.

She said: ‘Life’s too short to be too serious, right? So I feel like you have to be a little authentic. And if you like to have fun and you kind of own your stuff when it happens … and you go on to do better things and evolve. 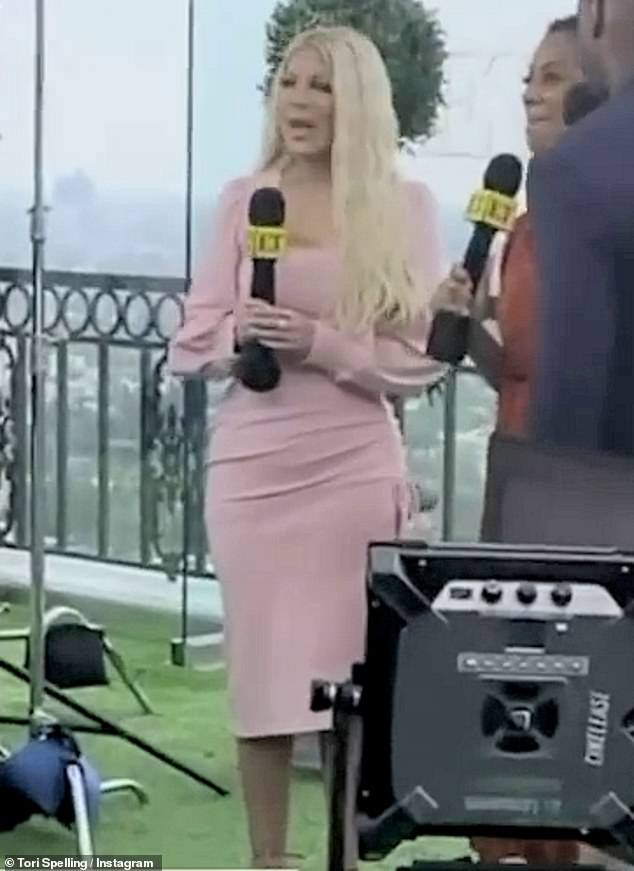 Another pink look: She was also seen in a hushed pink dress while talking to ET

‘You don’t want to be too messy. I mean, between being too messy and not, always being able to reel it back [is important] I think. Like if you make one little mess the next time you’ve got to be on it.’ 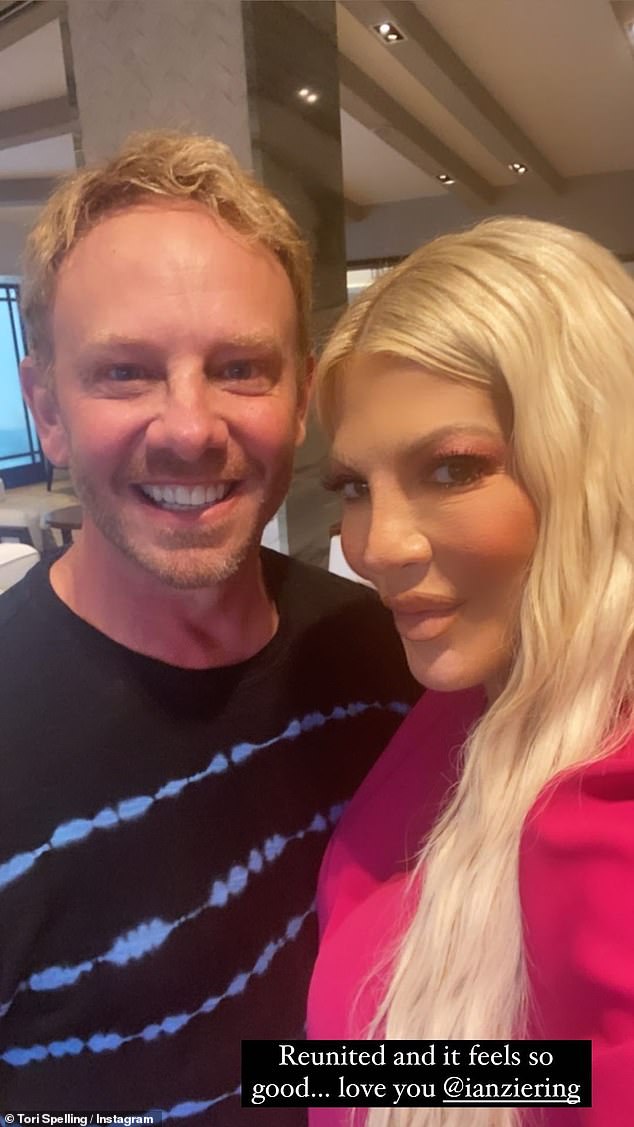 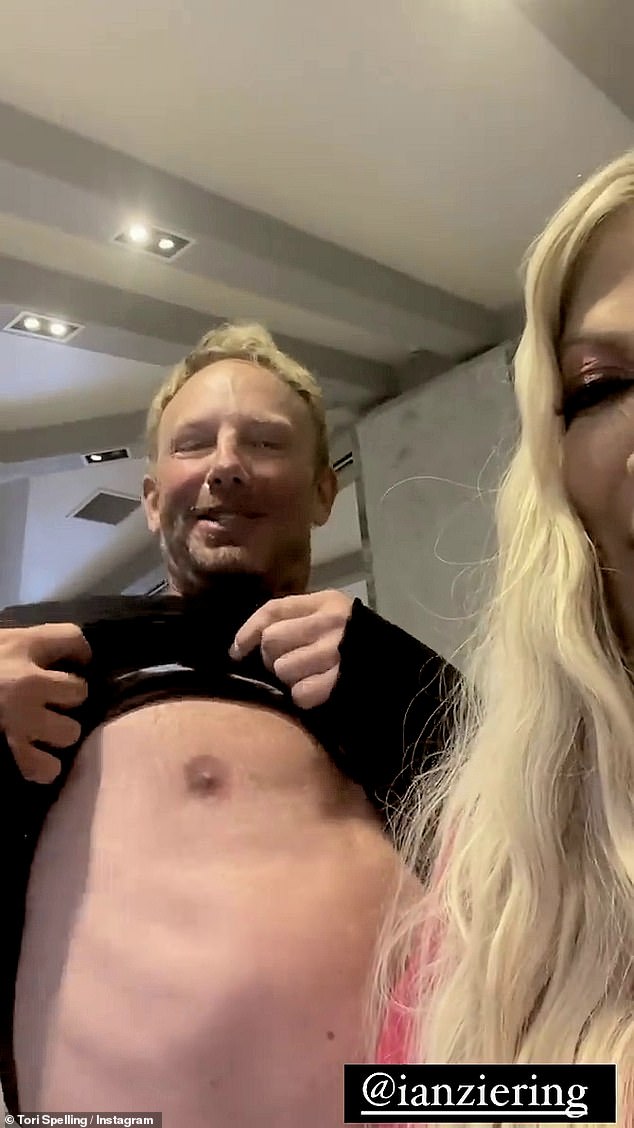 Silly Ian: At one point he lifted up his shirt to show off his chest as Tori stood next to him

Meanwhile, Tori revealed last month that her teenage daughter was bullied so badly that she suffered from panic attacks.

The ‘ star took to Instagram to praise 13-year-old Stella for her strength and courage.

The actress uploaded a photograph of Stella modelling for Petite ‘n’ Pretty and captioned it: ‘How Stella got her groove back… thx to @petitenpretty

‘Her 1st modeling shoot as a teen girl. Stella is an amazing human. Heart of gold & always leads w/kindness. She’s innovative &creative and full of fire. Which is why as a mom it was so painful to see a young woman’s fire dimmed bc of bullying. 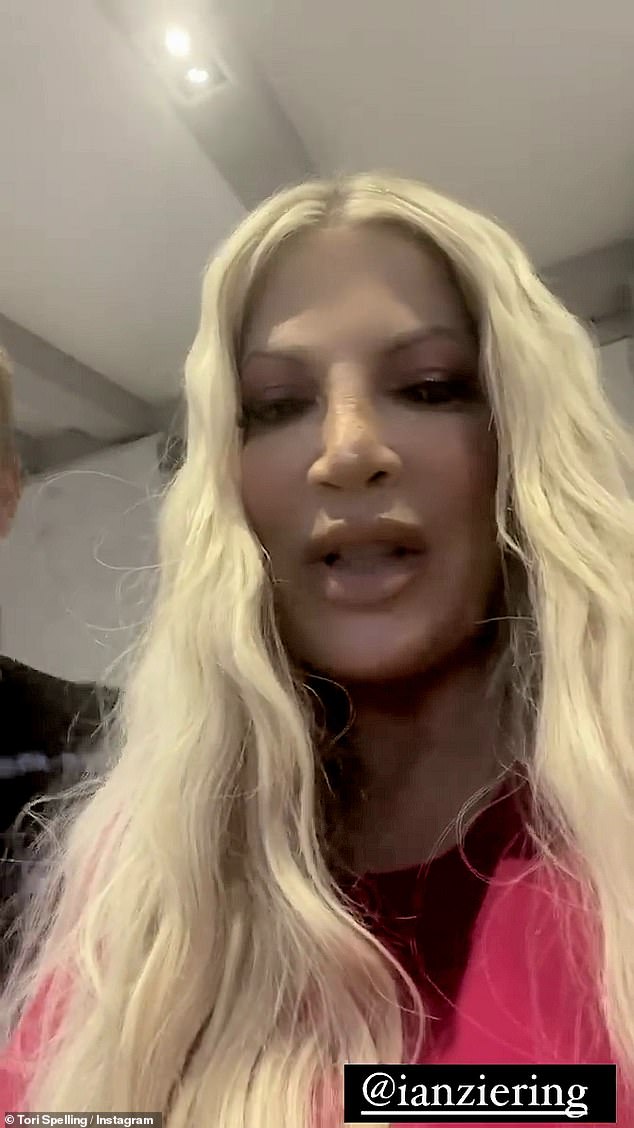 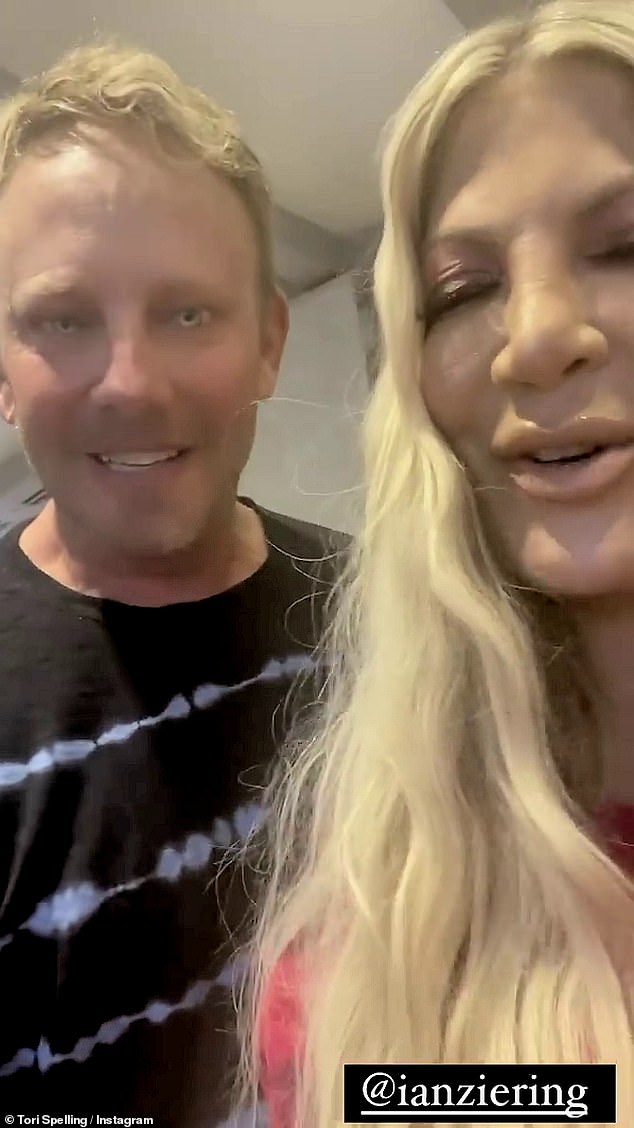 ‘Her bullying started in 5th grade in Encino. Sadly, the boy that bullied her and other girls & boys wasn’t stopped. His parents were on the board. They gave the school a lot of $. Sadly$ won out over the emotional care of the kids. I know i’ve talked bullying before.

‘But, worse than that was the bullying she faced from her own principal.

‘She missed alot of school due to this. But, what did remain was her drive & passion for baking, cooking, & crafting.’ 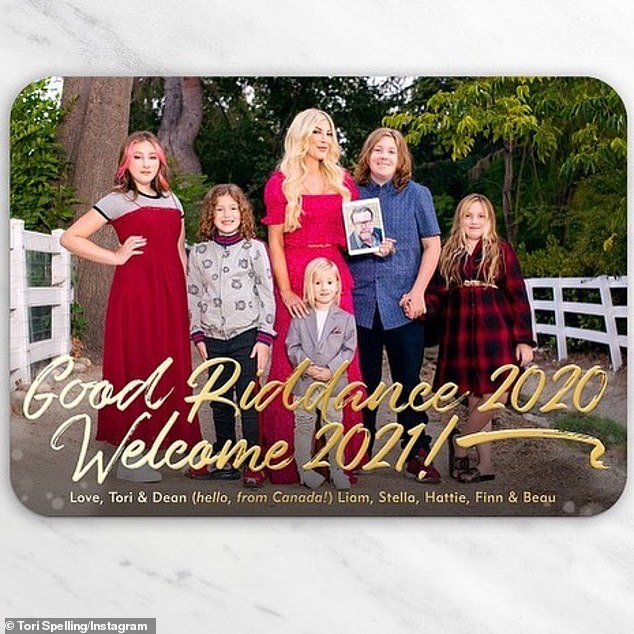 A good mama: Spelling seen with her five children as she holds up a photo of husband Dean