Tom Brady knew the best way to celebrate heading to Super Bowl 55 was by hugging his son. He walked to the stands after his big win to share a sweet moment with his oldest son Jack, and the video will make your heart melt.

Tom Brady, 43, shared the most heartfelt moment with his son Jack, 13, after clinching the Tampa Bay Buccaneers victory that sends them to Super Bowl 55. After his team’s epic Jan. 24 win, the quarterback headed to the stands. “Can I say hi to my son?” Tom asked. Jack headed down the stands and Tom climbed up to meet him.

The father and son hugged in the bitter cold. Jack was all bundled up in a grey parka, black gloves, and a red Tampa Bay hat. Jack was one of the select fans allowed to watch the game from the stands at Lambeau Field in Green Bay, Wisconsin. The Bucs traveled all the way from Florida to play the Green Bay Packers in the middle of winter. Tom’s Bucs beat Green Bay 31 to 26.

Jack is Tom’s oldest son from his relationship with ex Bridget Moynahan, 49. Tom and Bridget dated from 2004 to 2006, and Bridget gave birth to Jack in 2007. Bridget sent her congratulations to Jack’s dad after his NFC Playoffs win.

“Could not be more proud @tombrady said he would do it and he did. Congratulations @buccaneers,” she wrote on Instagram. She even included a sweet photo of Jack and Tom at the game. Tom is currently married to Gisele Bündchen, 40, and they have two kids together: Vivian, 8, and Benjamin, 11. 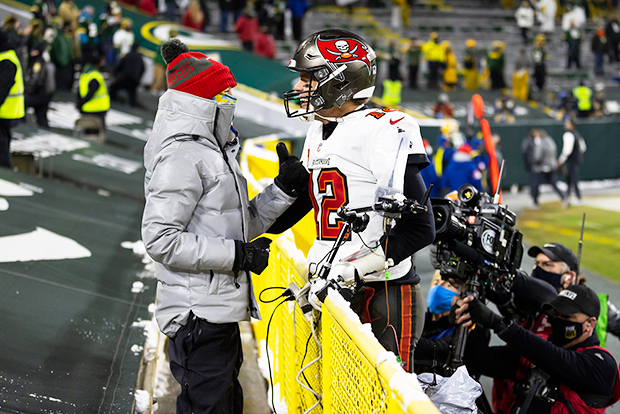 Tom’s latest win is a monumental moment for the quarterback. Tom is taking the Tampa Bay Buccaneers to their first Super Bowl since 2002. This also marks Tom’s first Super Bowl without the New England Patriots. Tom left the Patriots after 20 years in 2019. He won a whopping 6 Super Bowls with the Patriots. At 43 years old, Tom is making history again. He will be the oldest player to play in the Super Bowl.

Tom will be facing off against young quarterback Patrick Mahomes, 25, and the Kansas City Chiefs, who are the reigning Super Bowl champions. The Super Bowl 55 showdown will be on Feb. 7, 2021. They’ll be playing on Tom’s home turf, Raymond James Stadium, in Tampa, Florida.