One of the big cats at Carole Baskin‘s Big Cat Animal Rescue in Tampa took a big bite into a staffer’s arm, and it sounds like she’s lucky to be alive.

Hillsborough Fire Rescue says it received an emergency call around 8:30 AM Thursday at Baskin’s tiger sanctuary for an individual who suffered a serious bite to the hand, as well as an arm injury.

Carole and Howard Baskin tell TMZ … one of their longtime volunteers, a woman named Candy Couser, stuck her hand into the enclosure of Kimba the tiger, to open the door for feeding time … and Kimba bit into her hand and started thrashing. 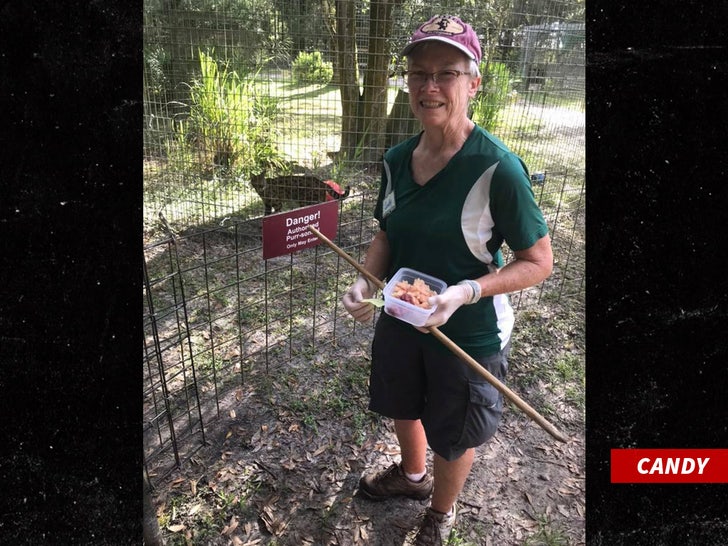 We’re told Candy’s arm was nearly torn off at the shoulder. The Baskins say when other staffers ran over to the scene, Kimba let go of Candy’s arm. Three employees applied a tourniquet and pressure to the wounds until paramedics arrived about 15 minutes later.

The medics continued treatment on the scene, attempting to stabilize Candy, and then transported her to a hospital. Despite the incredibly violent attack, we’re told Candy is expected to survive.

Carole and Howard tell us Candy was conscious during the ambulance ride and said she didn’t want Kimba to be harmed. They say the tiger will be kept in quarantine for the next 30 days as a precaution — but they add the animal was “just acting normal” because there was food present.

As you know … Baskin and her Big Cat Rescue became famous earlier this year thanks to the ‘Tiger King’ docuseries on Netflix, and her feud with Joe Exotic.

The Baskins say, at the time of the attack, Kimba was in an enclosure that’s behind 2 guillotine-style tunnel doors. Candy had opened the first, but when she got to the second it was clipped shut.

They tell us, “This is our universal signal NOT to open a gate without the coordinator coming to assist, but Candy said she just wasn’t thinking when she reached in to un clip it. It is against our protocols for anyone to stick any part of their body into a cage with a cat in it.”

We’re told Candy’s been a volunteer for 3 years at Big Cat Animal Rescue.