A palace fit for a former Health Secretary! Inside the lavish £2million property rented by Matt Hancock as beleaguered politician makes the most of five bedrooms and a private pool before three weeks of basic rations and Bushtucker Trials in I’m A Celebrity… Get Me Out Of Here!

It might be a different story down in camp, but there are currently no flies on Matt Hancock as he kicks back in a lavish £2million property on Australia’s picturesque east coast ahead of an imminent appearance on I’m A Celebrity… Get Me Out Of Here!

The beleaguered former Health Secretary, 44, has surprised many by agreeing to take part in the long-running ITV show as it returns to its native home in rural New South Wales after a two year absence sparked by the coronavirus pandemic.

But while his Conservative party colleagues might disagree, Hancock’s current digs suggest it was a decision well made, at least in the short term, as he makes the most of a private pool, five bedrooms, four bathrooms and that ever present Australian sunshine.

As Brits brace themselves for a long cold winter, the one-time Tory whip has enjoyed a temporary stay in the boutique coastal home before he makes a less than welcoming jungle debut alongside comedian Seann Walsh during Tuesday evening’s show. 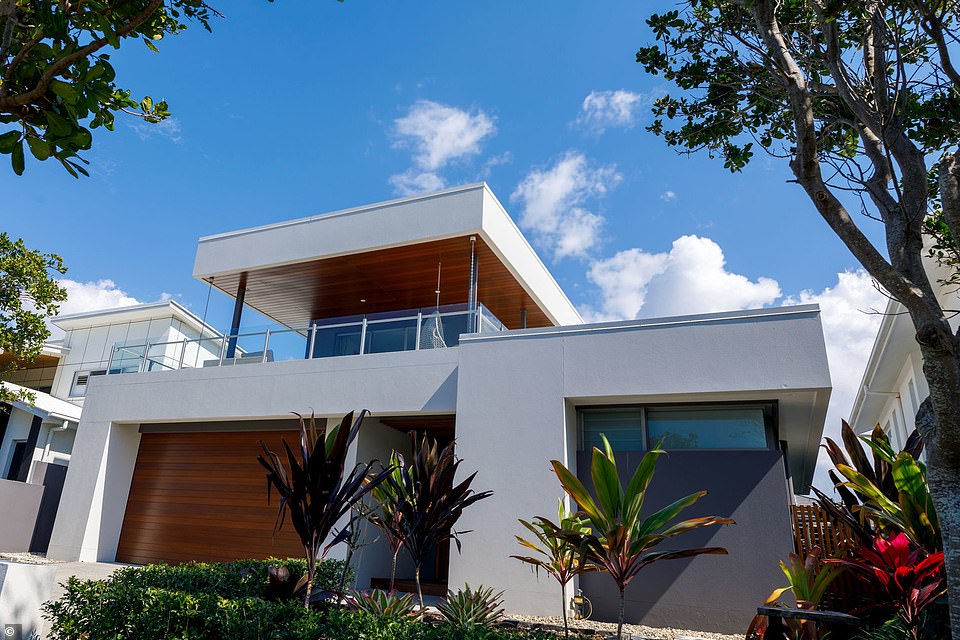 Pricey pad: Matt Hancock is enjoying a temporary stay at this idyllic boutique home ahead of his trip to the Australian jungle for the latest series of I’m A Celebrity… Get Me Out Of Here! 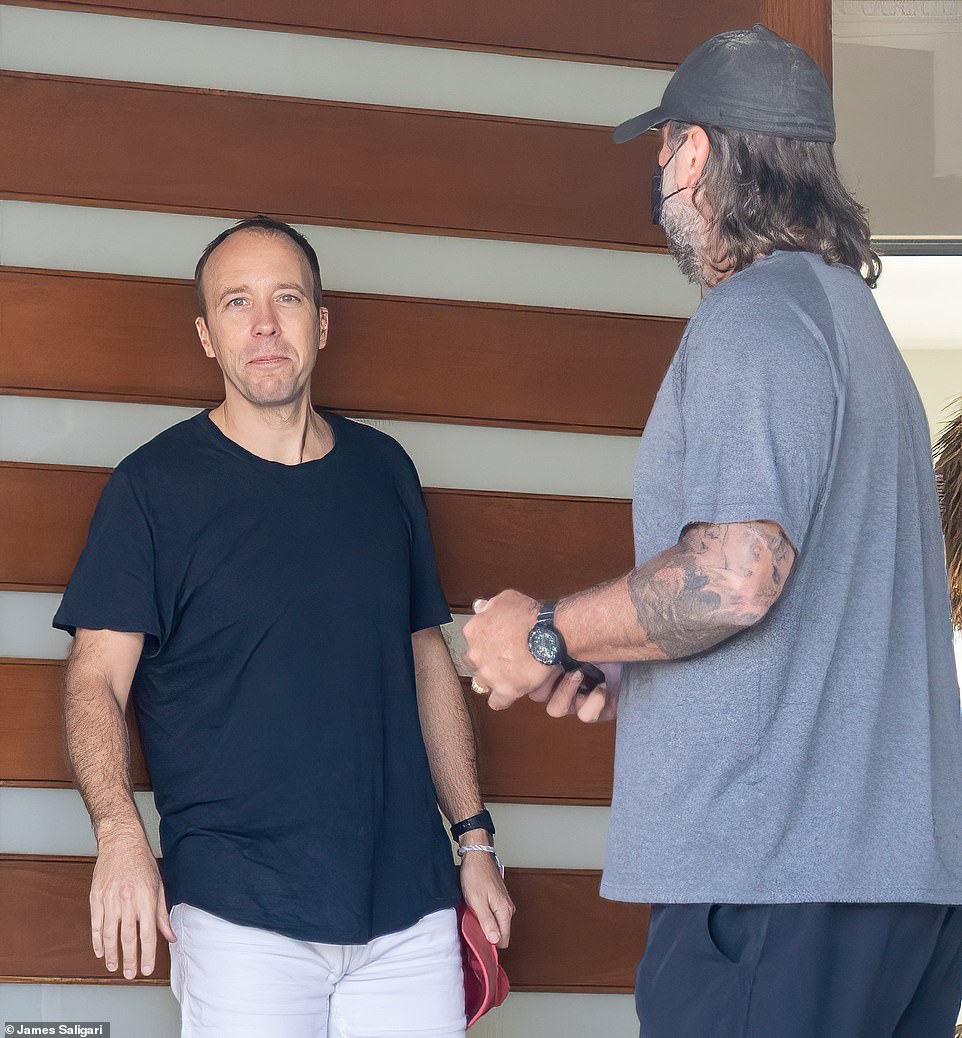 He gets my vote: The former Health Secretary has surprised many by agreeing to take part in the long-running ITV show as it returns to its native home in rural New South Wales after a two year absence sparked by the coronavirus pandemic

A source told MailOnline: ‘Matt has been living a life of luxury since landing in Australia. The holiday house, which has an idyllic view of the beach, has a private pool, five bedrooms, and four bathrooms, and it sleeps up to 10 people.

‘He’s had his breakfast, lunch, and dinner specially delivered to him and an array of toiletry products too.’

On the website advertising his isolated home, the owner welcomes potential guests to ‘escape’ and invites them to relax on the ‘sun-drenched pool deck’, which spans across two levels.

The property would give him direct access to the white sands of a nearby beach, where he could unwind with a view of the ocean.

Every level of the home has a large balcony, which is perfect for tanning in the warm Australian weather, though Hancock has avoided being spotted by remaining indoors.

But why go out when stunning verandas, private patios and neatly manicured lawns surround the property, while an array of double bedrooms, bathrooms and an enormous dining area remain at his complete disposal. 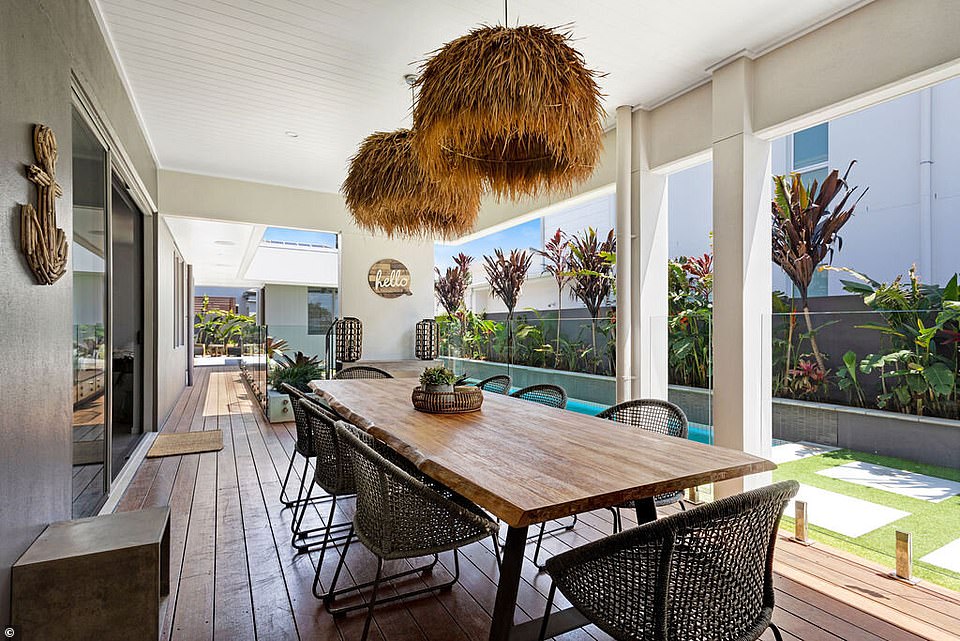 Look inside: The holiday house, which has an idyllic view of the beach, has a private pool, five bedrooms, and four bathrooms, and it sleeps up to 10 people 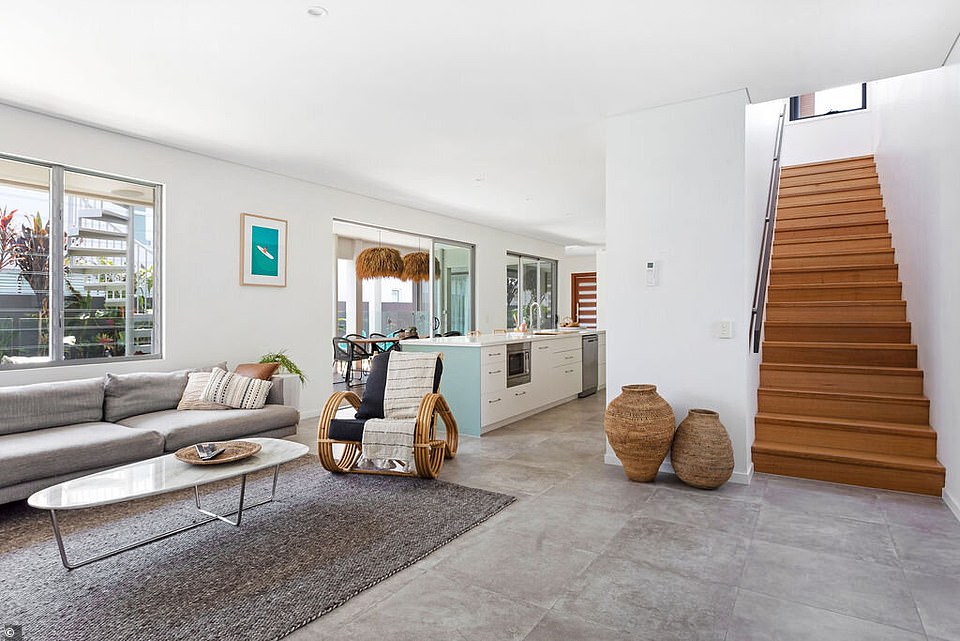 Living it up: A source told MailOnline that ‘Matt has been living a life of luxury since landing in Australia. He’s had his breakfast, lunch, and dinner specially delivered to him and an array of toiletry products too’ 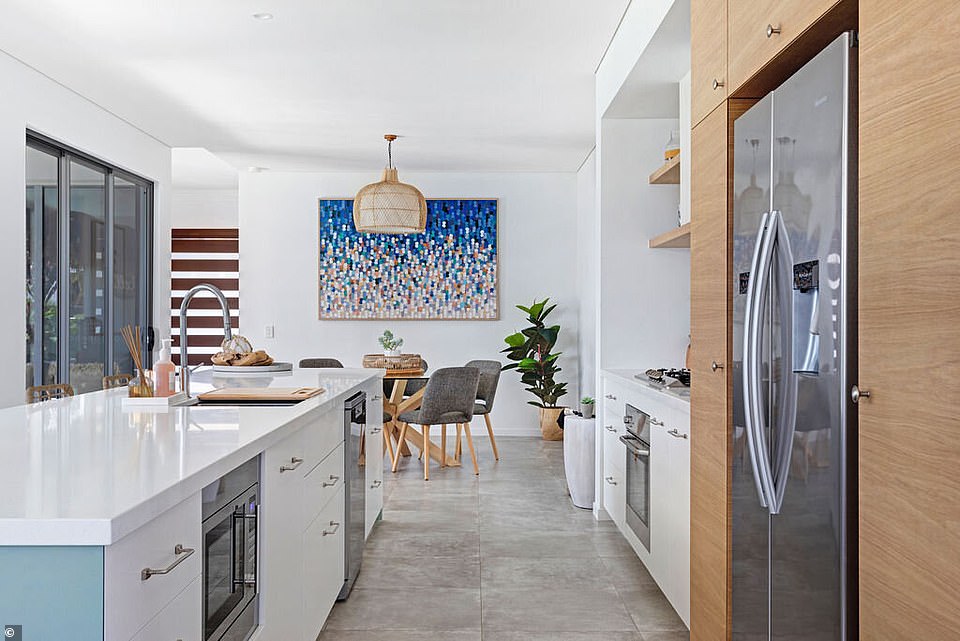 Natural light: Every level of the home has a large balcony, which is perfect for tanning in the warm Australian weather, though Hancock avoided being spotted – so stayed indoors 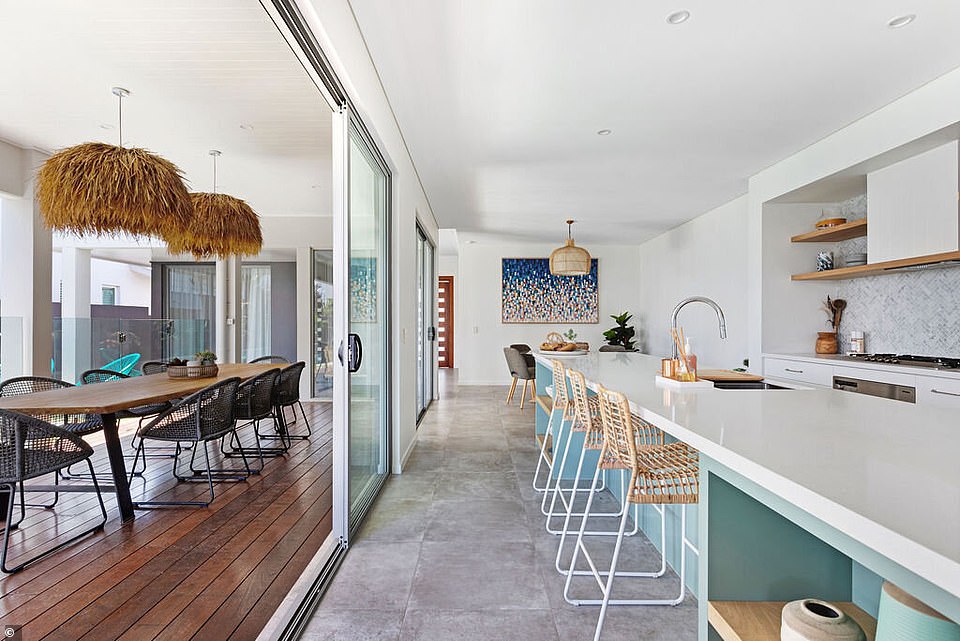 Step outside: The property would give Hancock direct access to the white sands of a local beach, where he could unwind with a view of the ocean

In comparison to Hancock’s beach pad, Chris Moyles, 48, described his isolation home as a ‘caravan.’

‘I could go down that route, but it might be too much. I’ve got a nice caravan on the beach, and they let me out for half an hour a day.’

But Hancock’s luck is about to change – and not for the better – as he’s being whisked away from his home comforts and is about to endure the reality of life in camp earlier than expected following the abrupt departure of reality TV star Olivia Attwood.

The father-of-three will swapping his private swimming pool for a hammock and hole in the ground, where campmates go to the toilet and have to manually dispose of each day.

He is also set to face a record number of Bushtucker trials, as the public are determined to see him squirm during his time in camp.

Hancock landed in Brisbane, Australia last Wednesday morning after it was revealed he had signed up to the reality series to raise awareness of dyslexia. 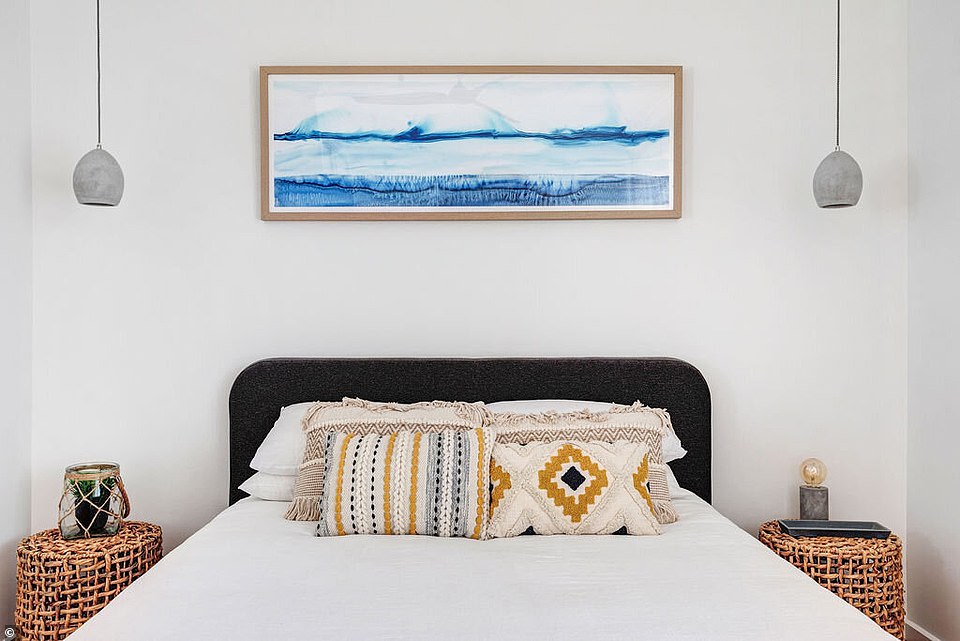 Living the dream: The former Tory MP has been living at the property in New South Wales, which is halfway between the Gold Coast and Byron Bay, for a week – while his co-stars entered the jungle last Friday 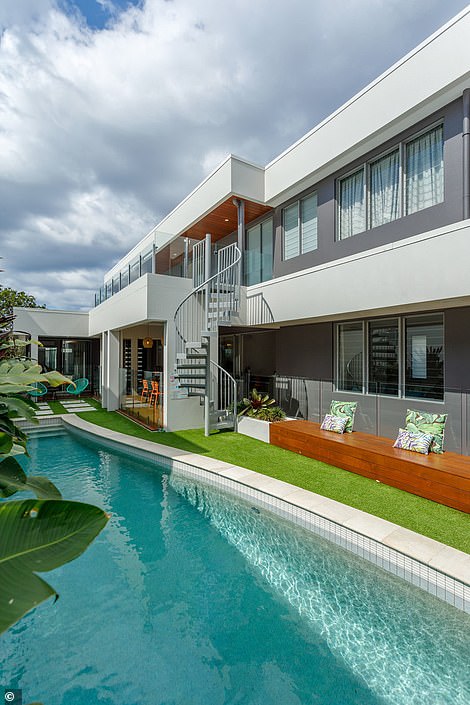 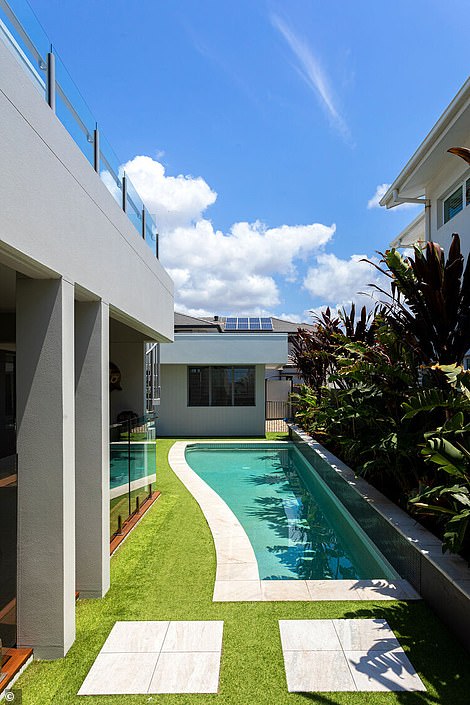 Stunning: On the website advertising Hancock’s isolation home, the owner welcomes potential guests to ‘escape’ and invites them to relax on the ‘sun-drenched pool deck’, which spans across two levels 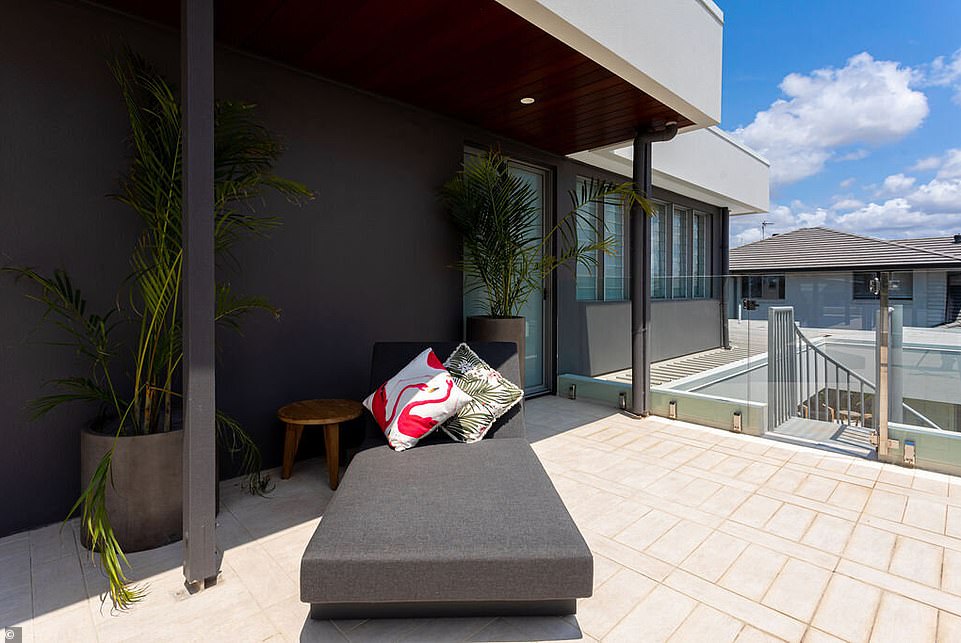 A place in the sun: While Hancock has been living a life of luxury,  campmate Chris Moyles described his isolation home as a ‘caravan’

Earlier this week, the Daily Mail exclusively revealed that he was given ‘special treatment’ ahead of his jungle stint by being granted permission to use his phone and laptop during his isolation period.

Hancock, who lost the Tory whip when it was announced he had signed up, was allowed to speak to his personal advisor via Zoom despite his co-stars having their technology confiscated.

A source said: ‘Matt has been given a different arrangement during his isolation period to the other contestants. He has been allowed his phone and laptop so he can carry on working and keep in touch with his constituents.’

The Daily Mail also revealed that the former Health Secretary’s girlfriend Gina Coladangelo, 45, will be flying out to Australia to support him on the show. 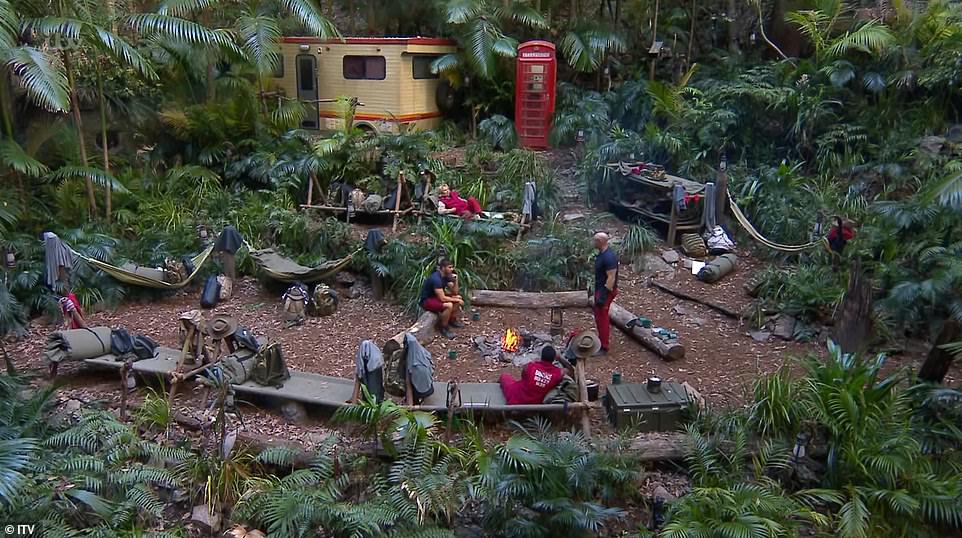 Jungle fever: The politician will be forced to exchange his lavish digs for the basic surroundings of rural New South Wales over the coming weeks