Sophie Turner was embracing her inner Pussy Galore on Friday night, as she made a glamorous arrival for her husband Joe Jonas’ James Bond-themed 30th birthday bash.

The Game Of Thrones star, 23, put on a busty display in a plunging midnight blue gown as she arrived for the glitzy celebration at Cipriani Wall Street in New York.

Joe also cut a dapper figure in a black and white tuxedo as he proudly escorted his wife into the celebration after arriving in the James Bond classic – an Aston Martin. 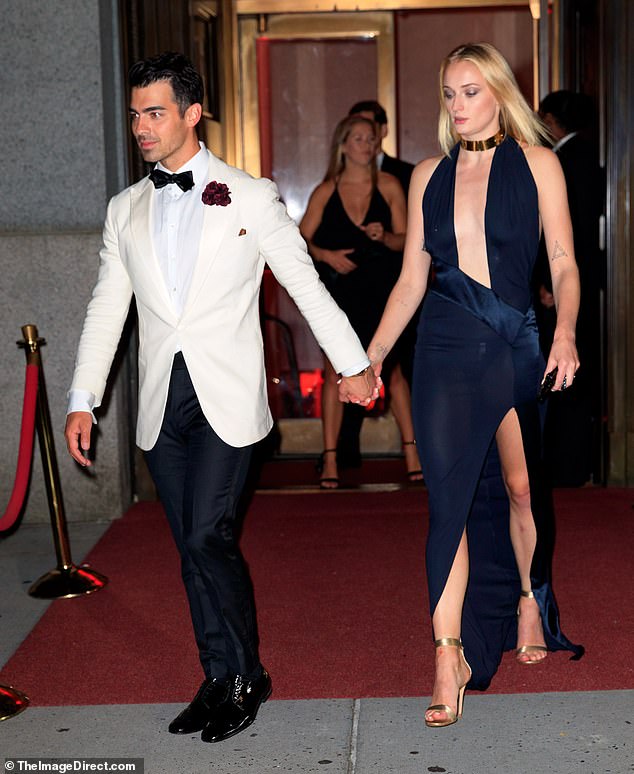 Wow! Sophie Turner, 23, was embracing her inner Pussy Galore on Friday night, as she made a glamorous arrival for her husband Joe Jonas’ James Bond-themed 30th birthday bash

Sophie was proudly displaying her slender pins in the low-cut blue dress, which boasted a thigh-high split and an asymmetrical waistline.

The British actress displaying a hint of her ample cleavage through the gown’s plunging front, with a gold choke adding a hint of edge to the ensemble.

Sophie accessorised her stylish look with gold thick-strapped heels as she proudly arrived on her husband’s arm. 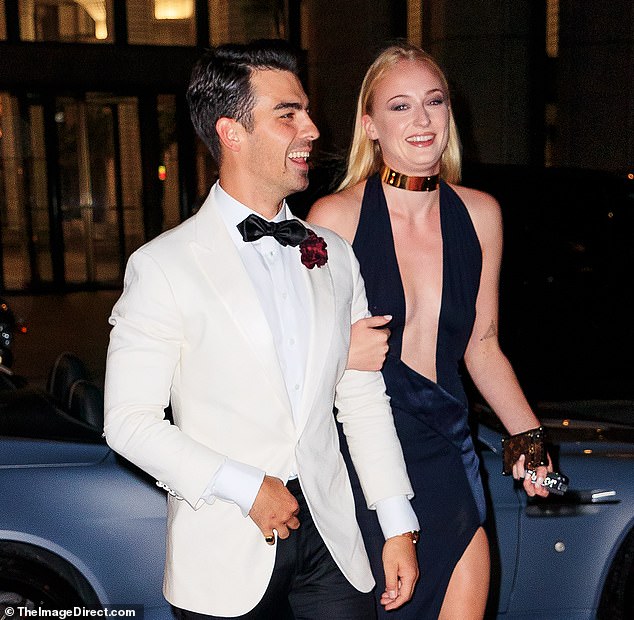 Stunning: The Game Of Thrones star put on a busty display in a plunging navy blue gown as she arrived for the glitzy birthday bash at Cipriani Wall Street in New York 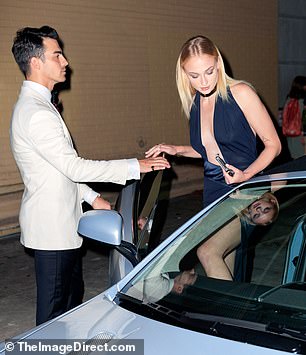 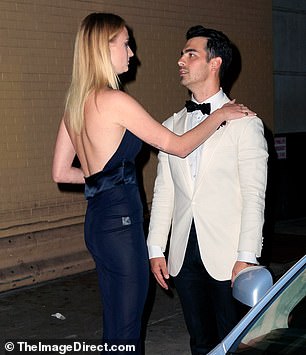 Smart: Appropriately arriving in an Aston Martin, Joe was every inch the gentleman as he escorted his wife out of the vehicle and into the party 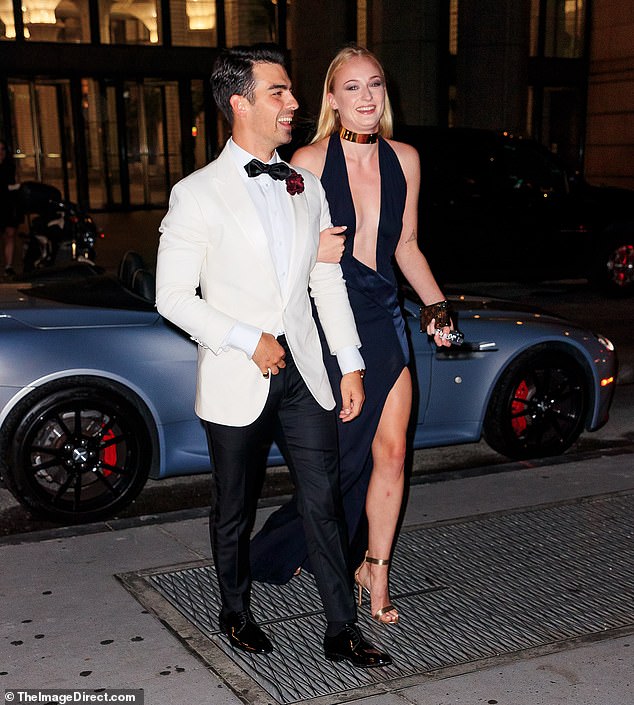 Suave: The singer certainly looked the part of 007 as he sported a smart white tuxedo jacket with black trousers, and a red rose pinned to his lapel 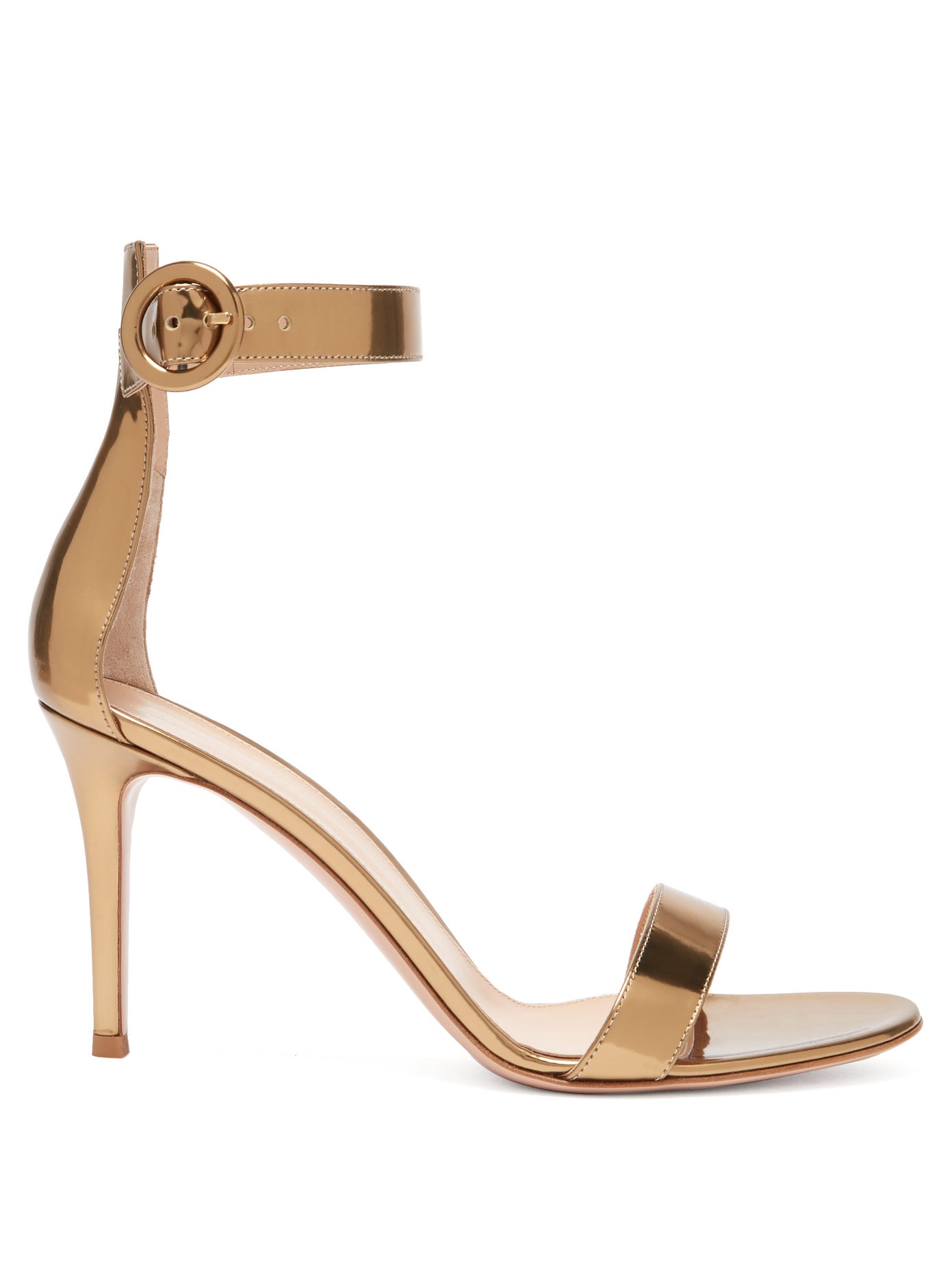 Birthday boy Joe was every inch the famous 007 as he arrived in an Aston Martin DB 11 Volante – believed to be worth £147k – for the celebration.

The singer opted for a smart white tuxedo with black trousers, along with a bow tie and simple red rose on his lapel.

Both Joe and Sophie were the picture of happiness as they continued to celebrate his birthday. The couple were also joined by his brothers Nick, 26, and Kevin, 31, and their respective wives Priyanka Chopra, 37, and Danielle Jonas, 32. 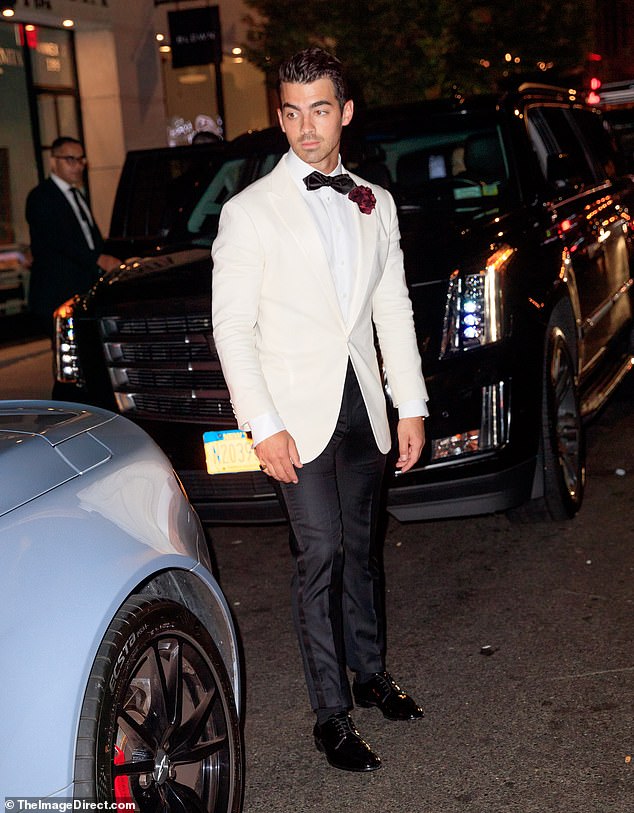 Suave: Joe was marking his 30th birthday in spectacular fashion, and was also joined by his brothers and their respective wives for the bash 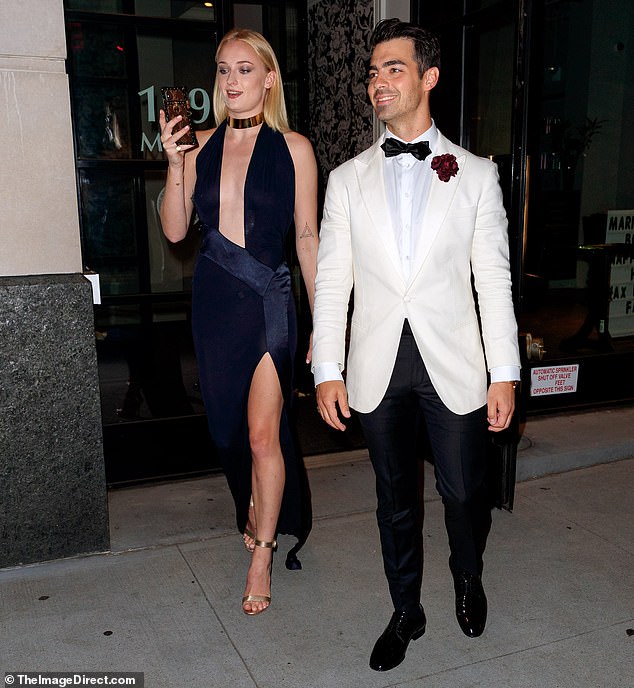 Mr and Mrs: Sophie and Joe legally tied the knot in Las Vegas in May after four years together, and went onto exchange vows again in a lavish French ceremony a month later 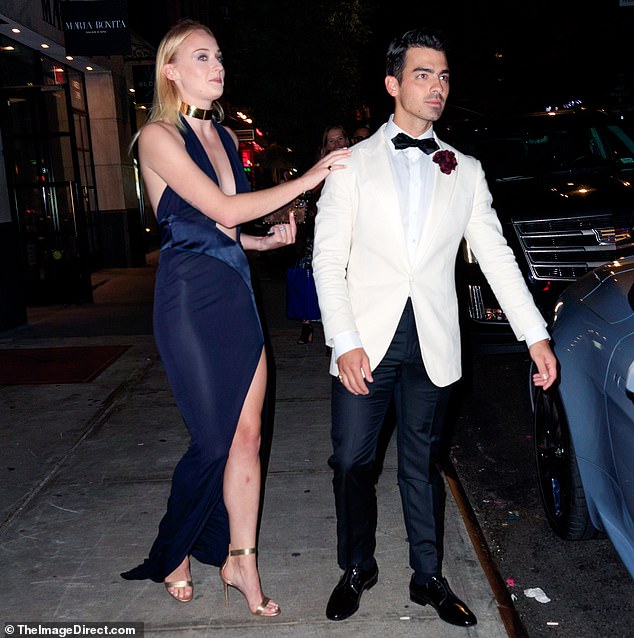 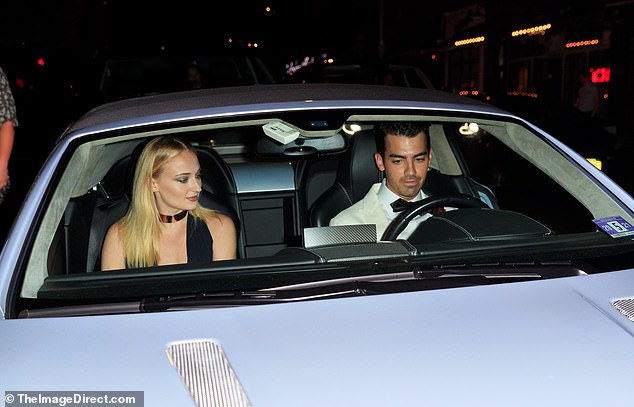 Off we go! Later the couple were spotted climbing into the classic car as they drove away after their birthday celebrations

Sophie and Joe legally tied the knot in Las Vegas in May after four years together, and went onto exchange vows again in a lavish French ceremony a month later.

It comes after Sophie surprised her husband on Thursday – his actual birthday – after taking to the stage during The Jonas Brothers concert in Washington DC.

In a video Joe posted to Instagram, his brother Nick kicked off a celebratory birthday song and got Kevin and the rest of the stadium to pick it up from there.

Sophie could be seen in the background lighting the candles on his birthday cake with Kevin’s wife, Danielle while Joe orchestrated the crowd, taking it all in.

At the end of the song Joe blew out his candles and gave Sophie a sweet kiss, for which the audience cheered extra loudly. 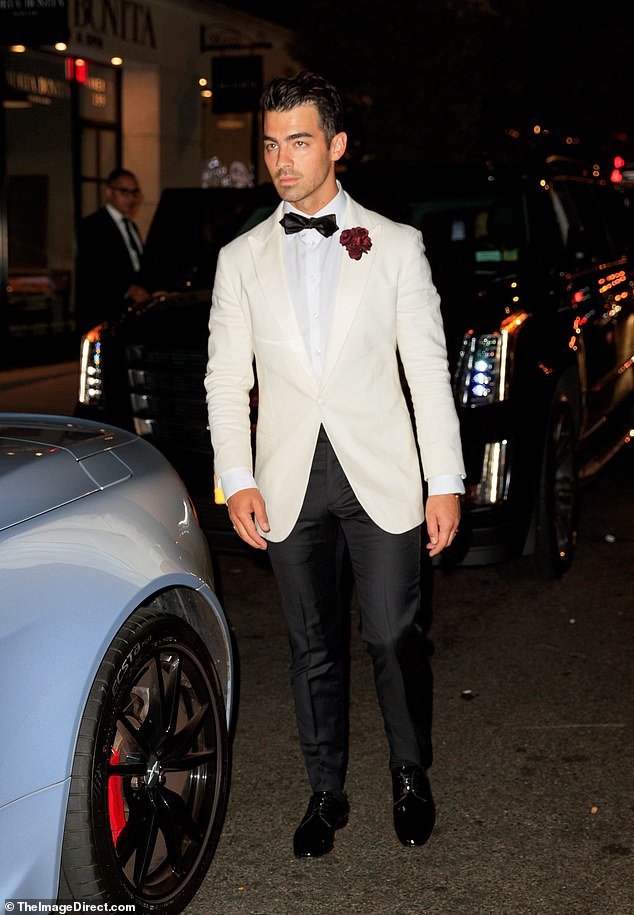 Looking good: It comes after Joe was surprised by wife Sophie on-stage on Thursday – his actual birthday – with a Game Of Thrones-themed cake 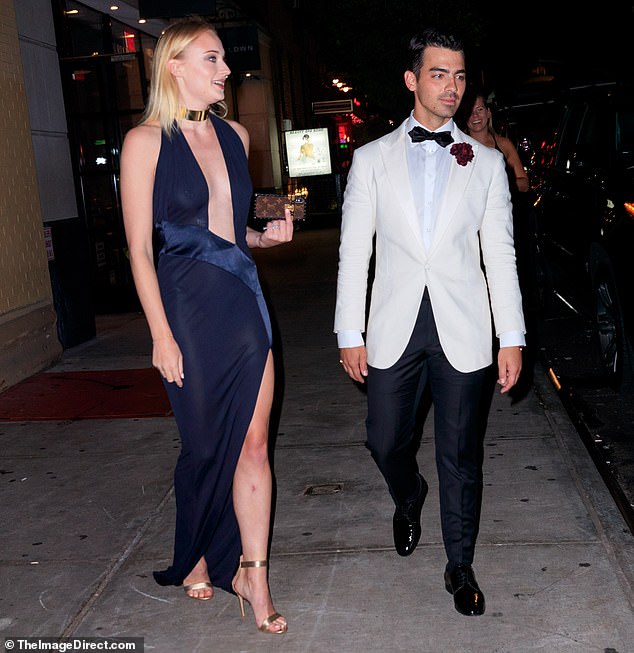 Glamorous: Sophie finished her stylish party look with gold thick-strapped heels and her blonde tresses in a poker straight style 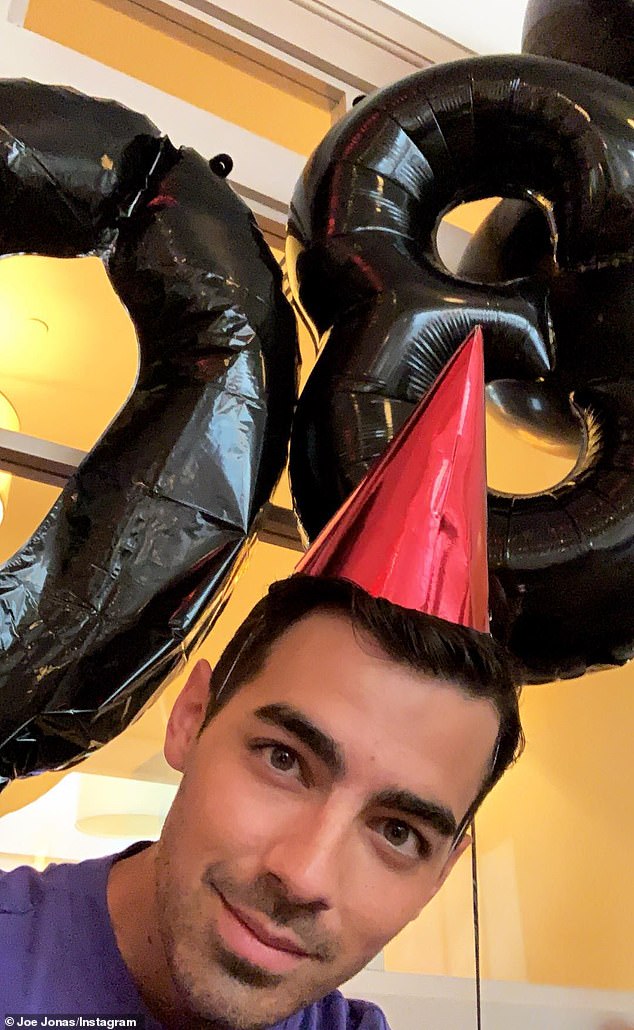 Fun: Throughout his birthday celebrations, Joe has also taken to Instagram to document his antics, including the 30 balloons and his fun party hat after a lunch with pals on Friday

Throughout his birthday celebrations, Joe has also taken to Instagram to document his antics.

The Sucker hitmaker posted a selfie of his 30 balloons as he sported a fun red party hat, after a lunch with pals in New York City on Friday.

As several of his friends also shared snaps from inside the bash, it seems their were even given specially made dollar bills emblazoned with the star’s smouldering expression. 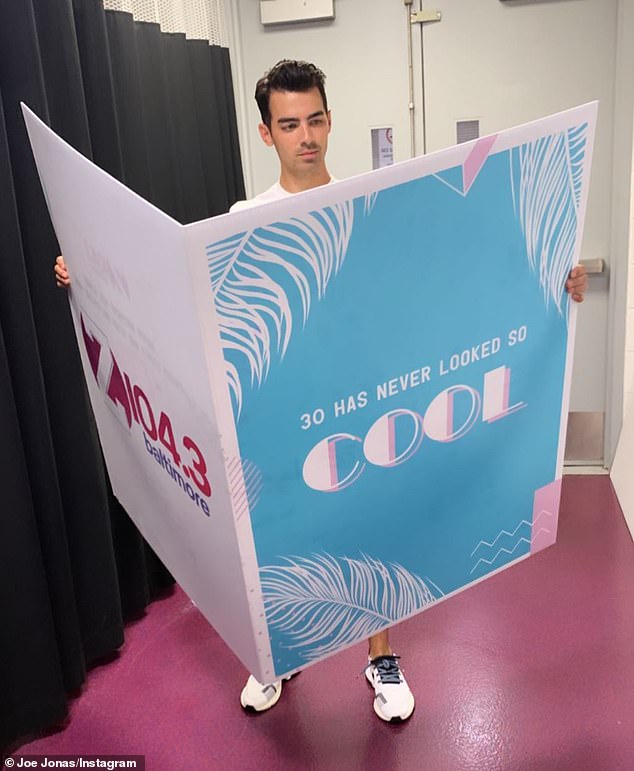 Look at that! It seems the star was also gifted with an enormous birthday card after he visited a radio station 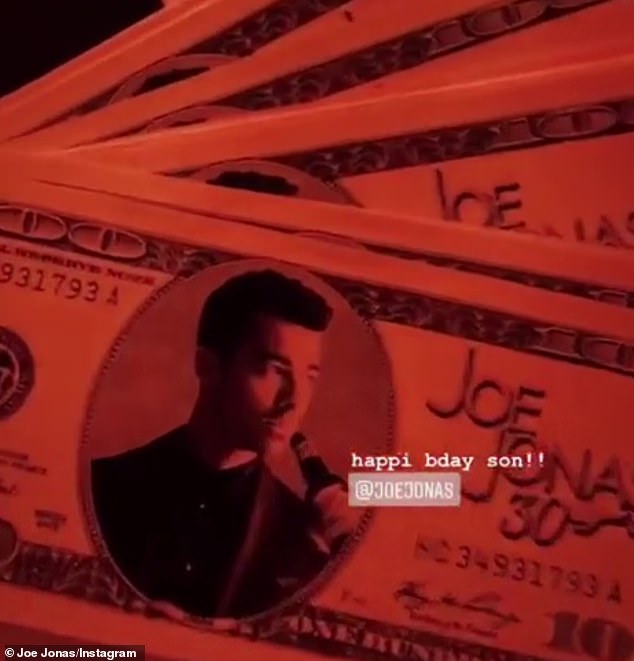 Sensational: Several snaps from inside Joe’s James Bond bash also revealed he had specially made dollar bills for the celebration 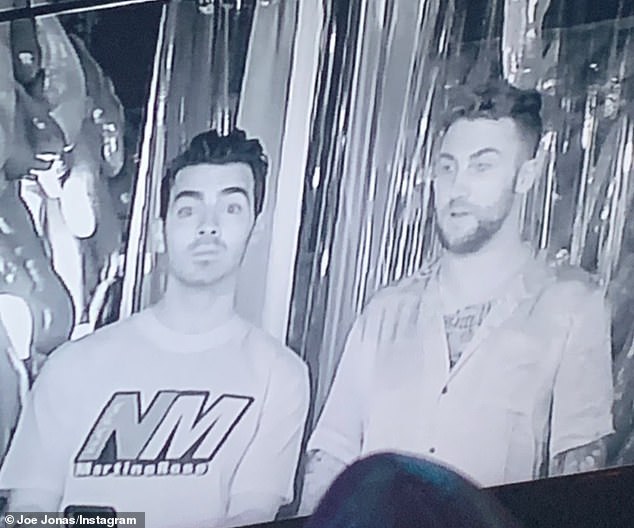 Larking about: Several posts to Instagram Stories came from Joe’s pals who were also celebrating his birthday 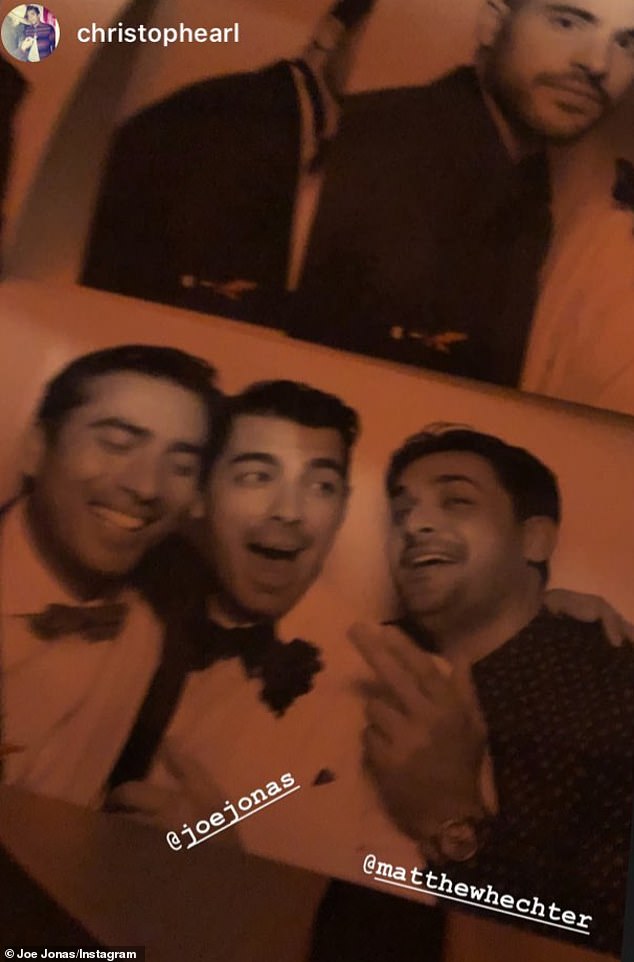 Beaming: The American music star appeared to have a whale of a time during his week of birthday celebrations