Sprightly Sir Paul McCartney, 79, dives into crashing waves as he hits the beach with his businesswoman wife Nancy Shevell, 62, in St Barts

Sir Paul McCartney and his wife Nancy Shevell looked relaxed as they took a dip in the Caribbean sea while holidaying in St Barts on Tuesday.

The former Beatle, 79, and businesswoman Nancy, 62, hit the beach with Nancy’s son Arlen, 29, from her relationship with politician Bruce Blakeman.

Protecting his fair skin from the strong sunshine, Sir Paul wore a navy blue T-shirt as he headed for a swim, while Nancy put on a leggy display in black thigh-skimming shorts. 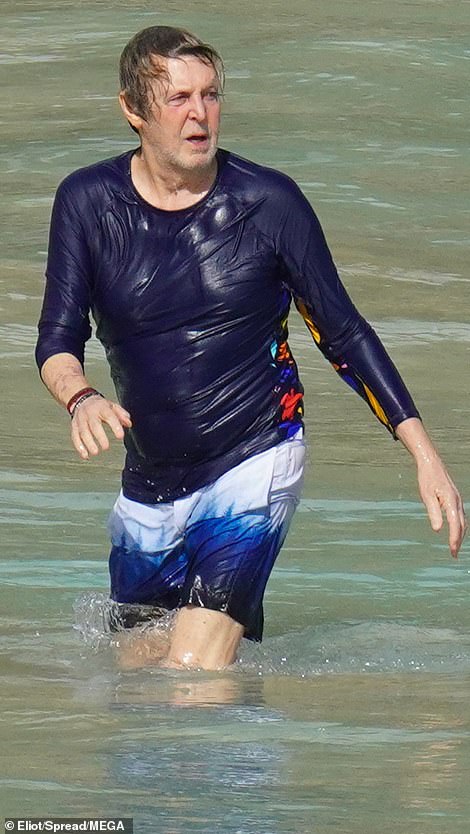 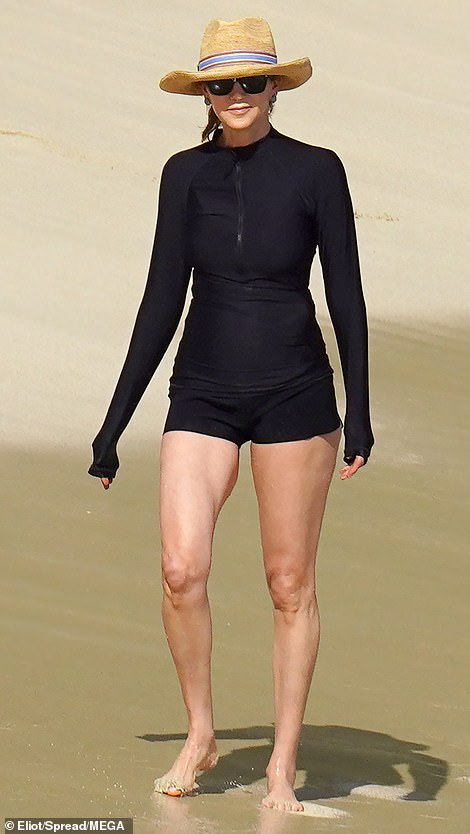 Fun in the sun: Sir Paul McCartney, 79, and his wife Nancy Shevell, 62, looked relaxed as they took a dip in the Caribbean sea while holidaying in St Barts on Tuesday

Paul teamed the look with tie-dye blue and white swimming shorts as he played about in the clear water and at one point dived into a wave as it crested before crashing onto the golden sandy beach.

The Beatles legend was dripping from head to toe as he headed back to his group of pals and roughly towel dried his hair, while Nancy chatted away.

The businesswoman was in good spirits as she strolled across the beach, in her all black ensemble which comprised of a black long-sleeve top, a pair of matching shorts and a straw hat. 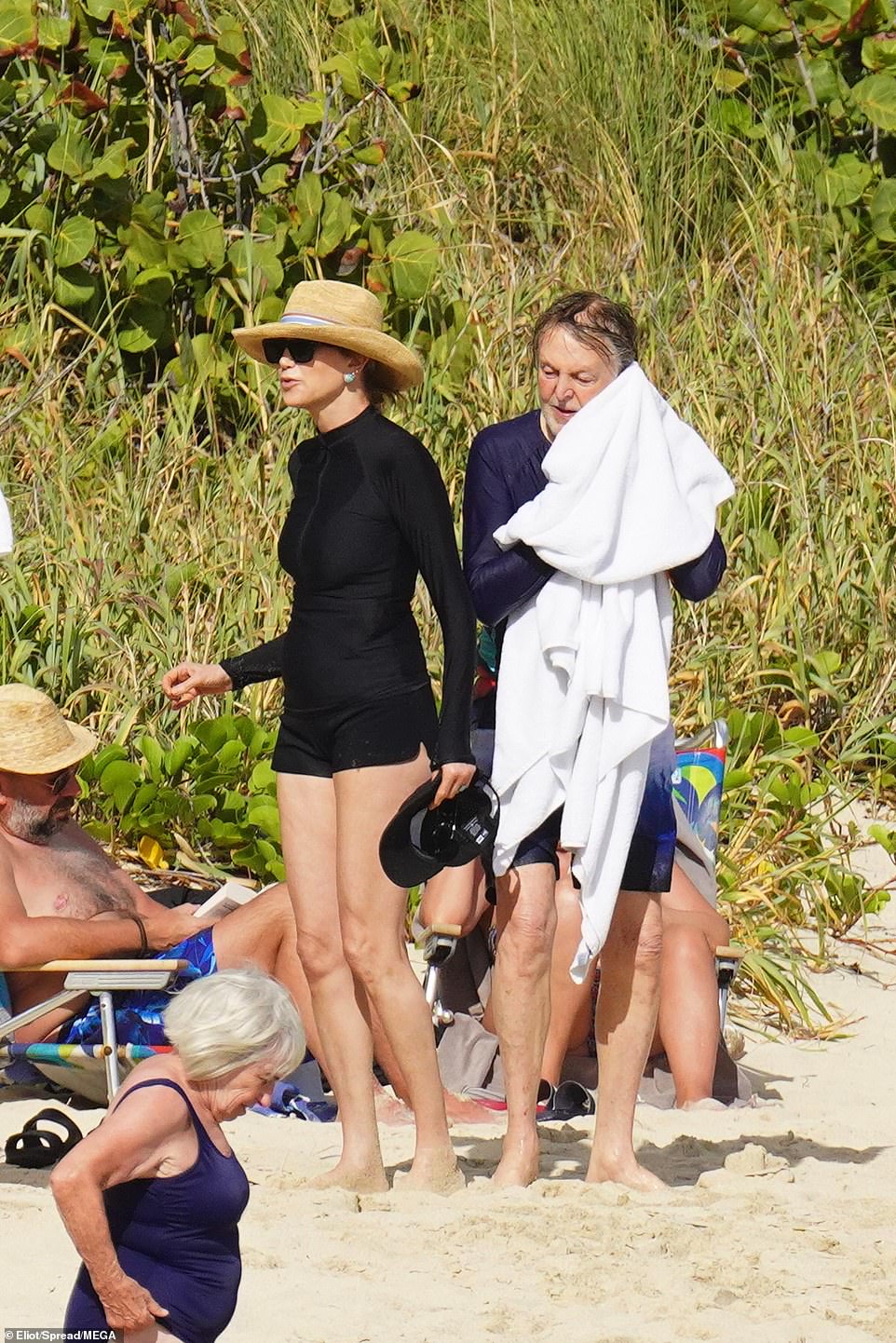 Beach day: Protecting his skin from the strong sunshine, musician Sir Paul wore a navy blue T-shirt and dried himself off after swimming in the warm sea 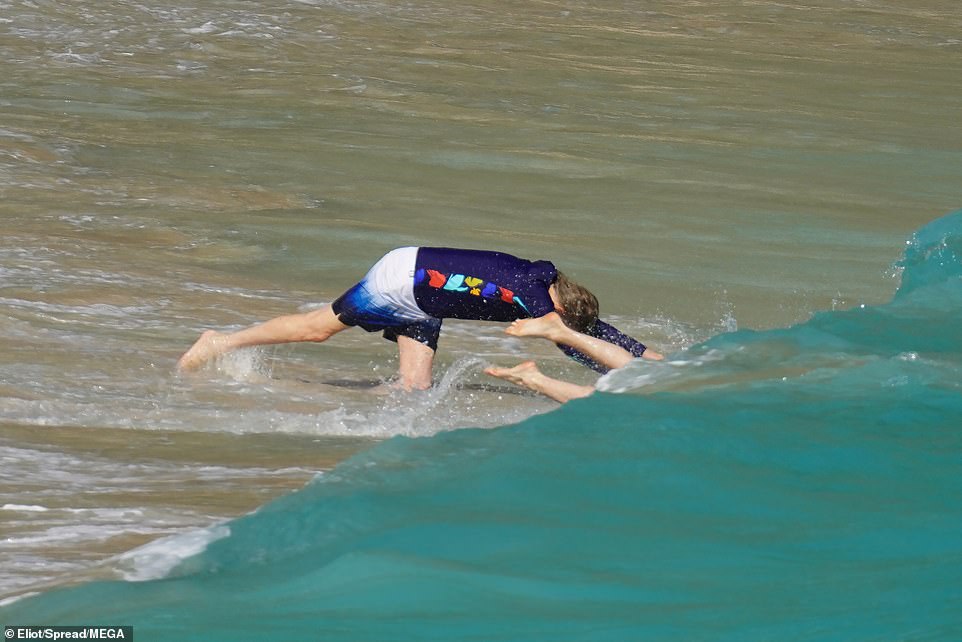 Sporty: He wore a pair of tie-dye blue and white swimming shorts as he played about in the clear water, at one point diving into a wave as it crested before crashing onto the golden sandy beach 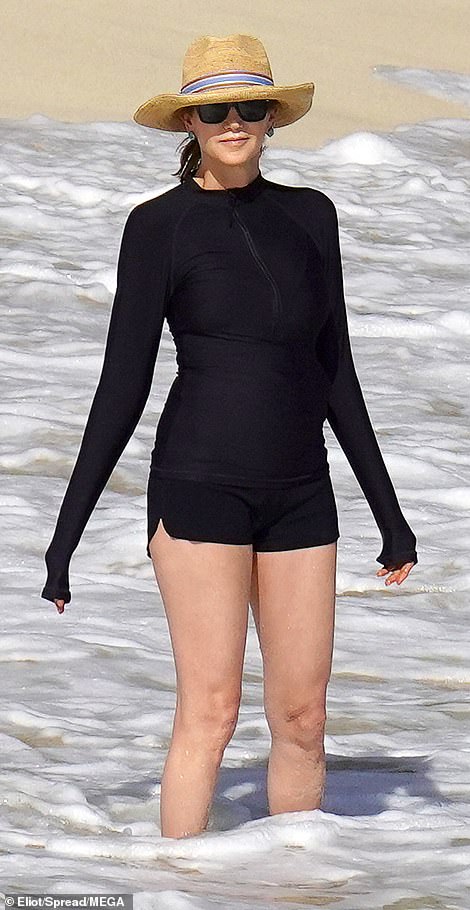 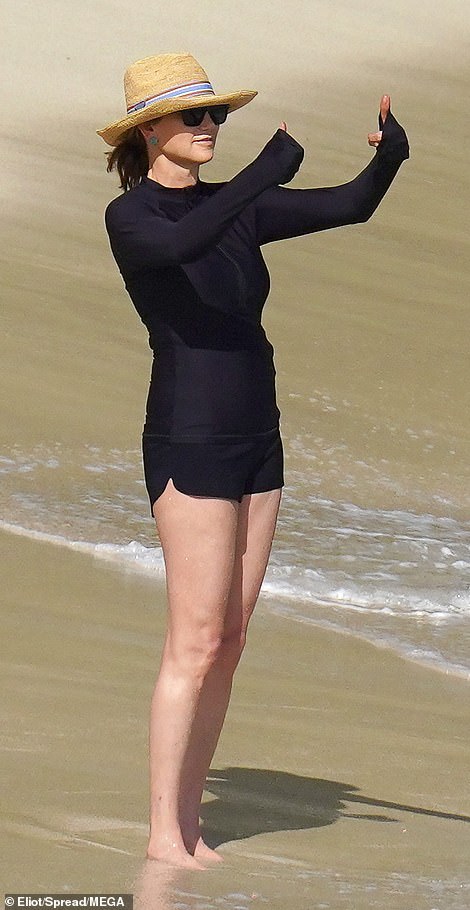 Relaxed style: Nancy was in good spirits as she strolled across the beach, smiling as she stood on the soft sand while watching Sir Paul in the water

American Nancy, who is the vice president of her family transportation services business the Shevell Group, sheltered her eyes behind a pair of dark sunglasses.

Nancy looked content watching her partner Paul as he went for his swim, with the star almost falling into the water at one point before catching his balance.

He looked relaxed as he lay on the surface of the azure sea before later performing a variety of swimming strokes as Arlen swum nearby. 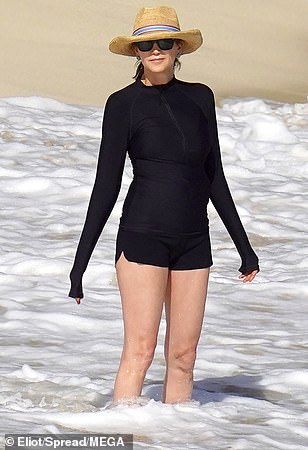 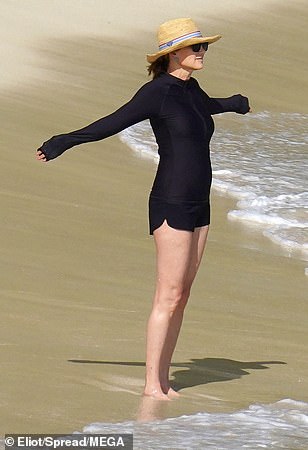 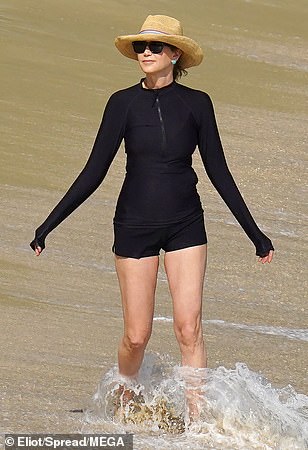 Fashion focus: She wore a black long-sleeve top and a pair of matching shorts, while she had a straw hat on her head, stretching her arms out to her side as she stood in the sun 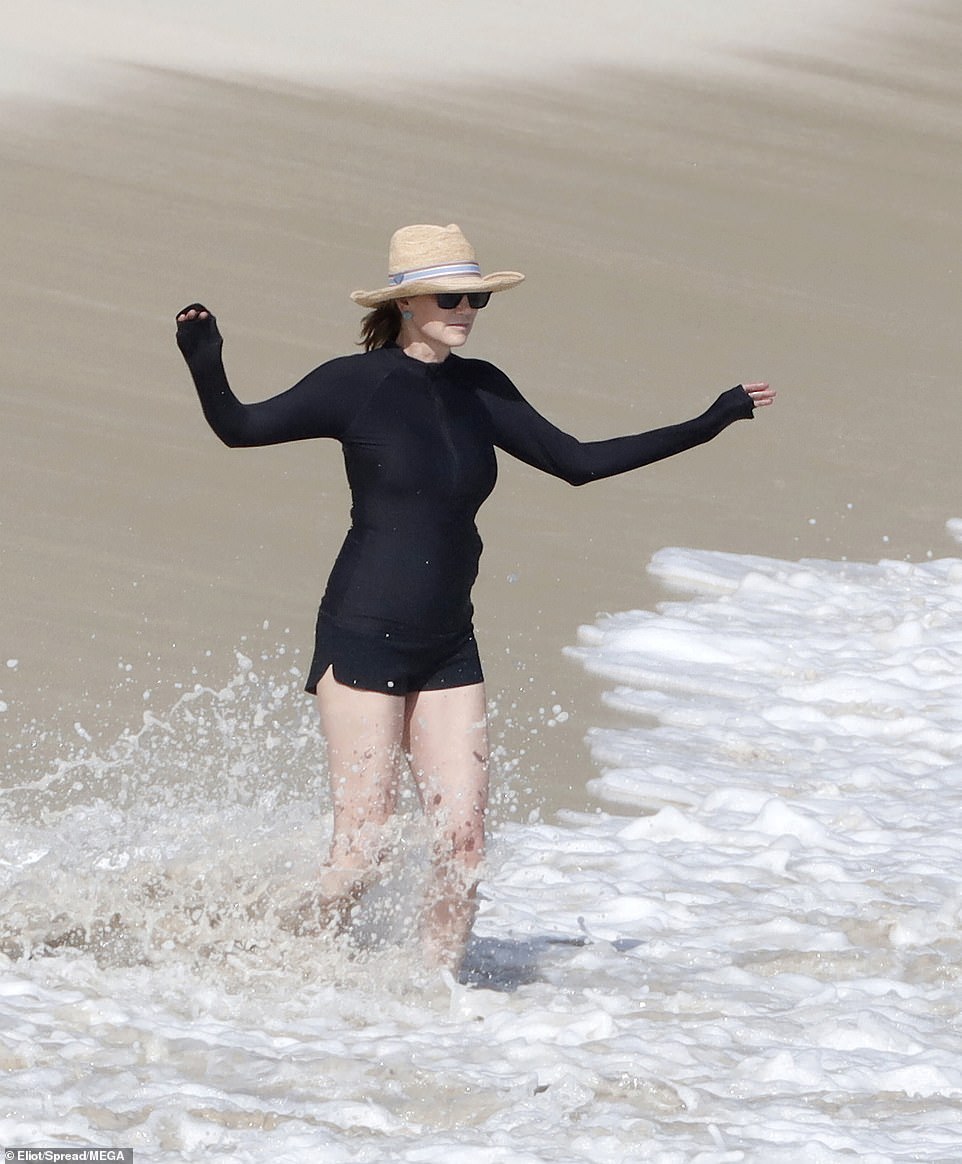 Heading in: Nancy accessorised with a pair of sparking earrings which were clear to see as they glistened in the bright sunshine

Going for a stroll: American Nancy, who is the vice president of her family transportation services business the Shevell Group, sheltered her eyes behind a pair of dark sunglasses

Nancy waved at her family as she stood in the shallow surf before Paul returned to the shore to wrap himself in a towel.

Sir Paul and Nancy have been together since 2007 and married in a ceremony held in Marylebone four years later in 2011.

It’s thought Sir Paul and Nancy first met thanks to both owning homes in the Hamptons. 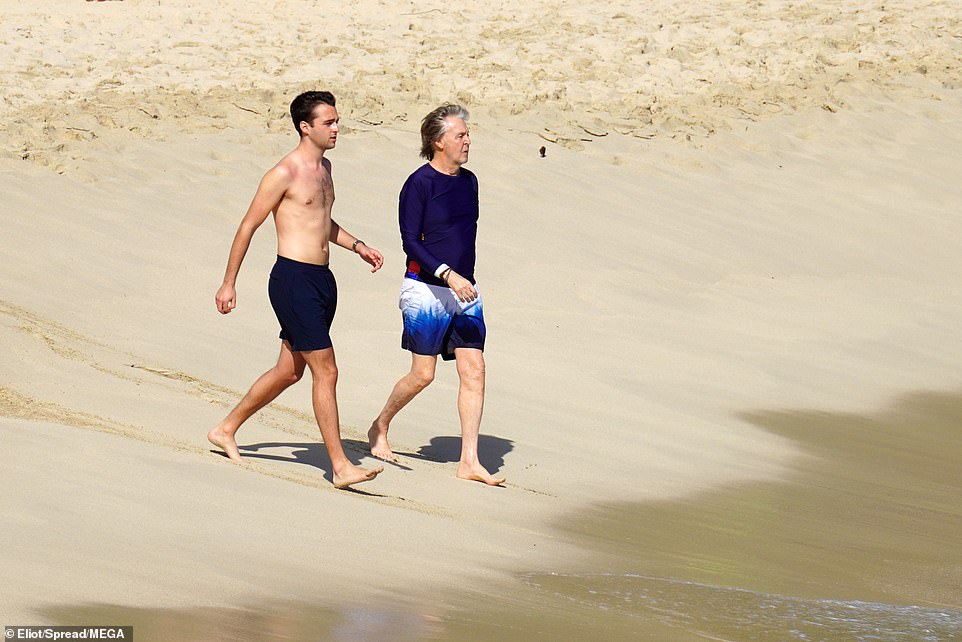 Heading in: Sir Paul could be seen walking alongside his son Arlen as they made their way to the water for a swim

Sir Paul was previously married twice before – he wed first wife Linda in 1969 and the pair were married until Linda died, aged 56, in 1998, following a battle with breast cancer.

He later wed second wife Heather Mills, who he shares daughter Beatrice with, in 2002 – they split four years later in 2006 and their divorce, costing the star £24.3 million, was finalised in 2008.

Sir Paul and Nancy’s holiday comes after it emerged Sir Paul is being considered for a peerage to mark his 80th birthday this summer. 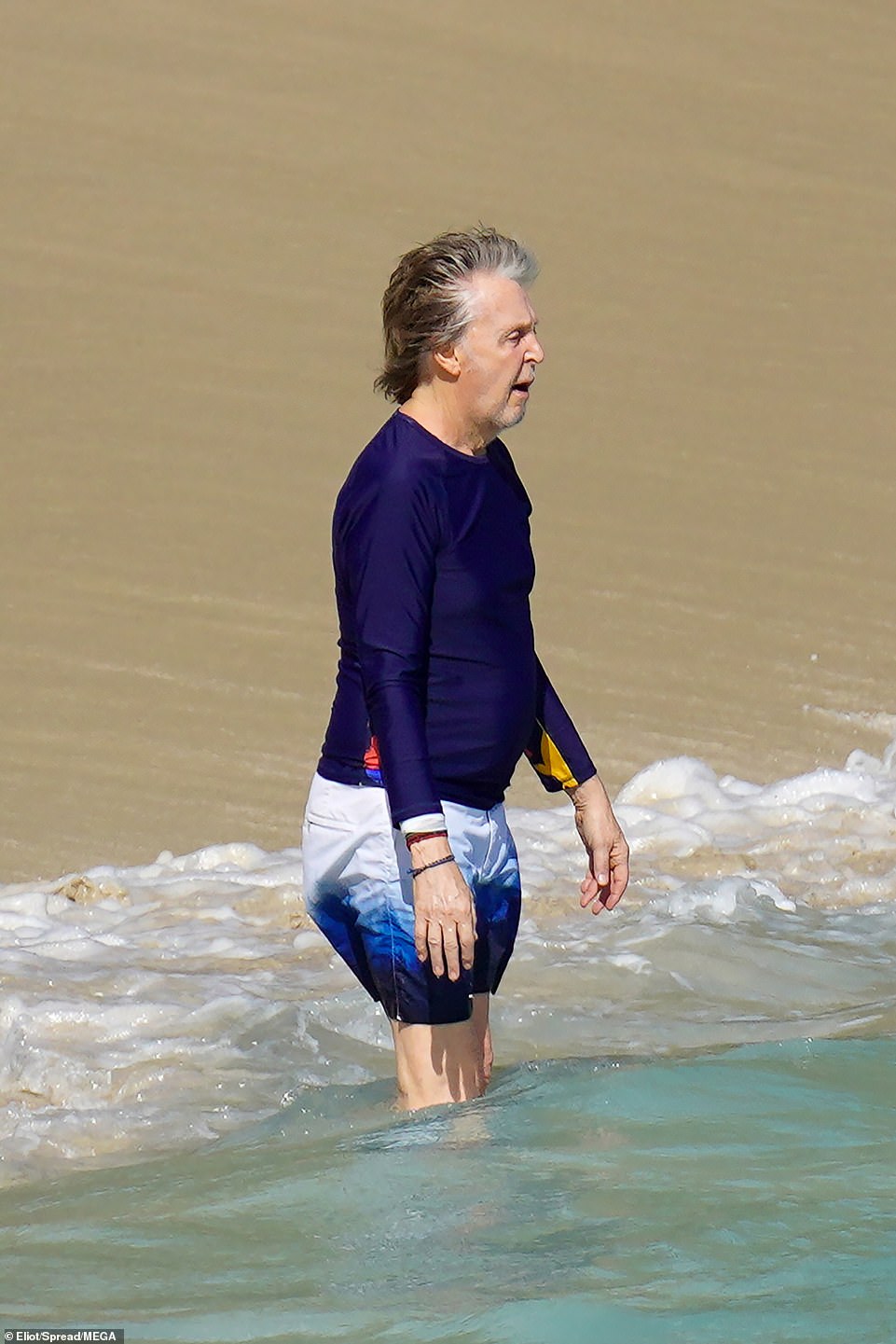 Making waves: Paul went for his swim, with the star walking tentatively into the water at one point

The Beatles legend could be made a Lord in recognition of his lifetime of musical achievements and service to British culture.

The Sun reports that sources are saying the prestigious honour is in the pipeline, 25 years after he was first knighted by The Queen.

If he is awarded with the title, he will join a very select group of musicians, including theatre mogul Andrew Lloyd Webber, 73, composer the late Benjamin Britten and late violin virtuoso Yehudi Menuhin. 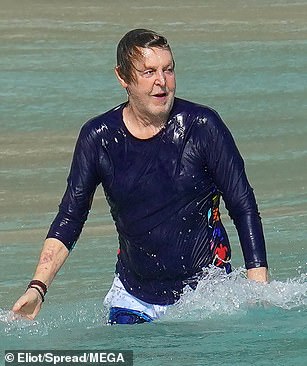 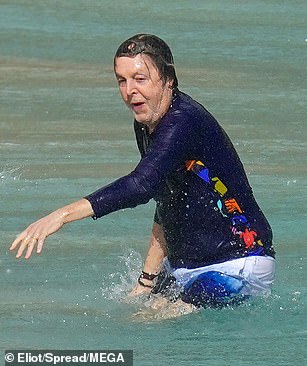 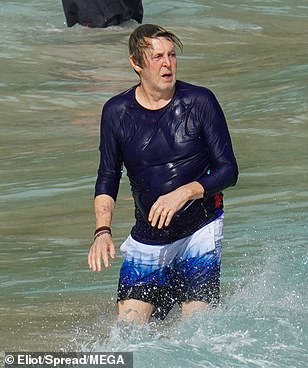 Rock and roll: Sir Paul was seen almost falling into the water at one point before catching his balance during his relaxing holiday 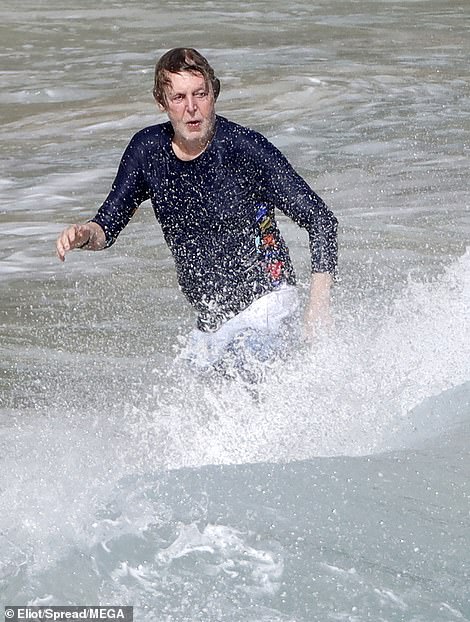 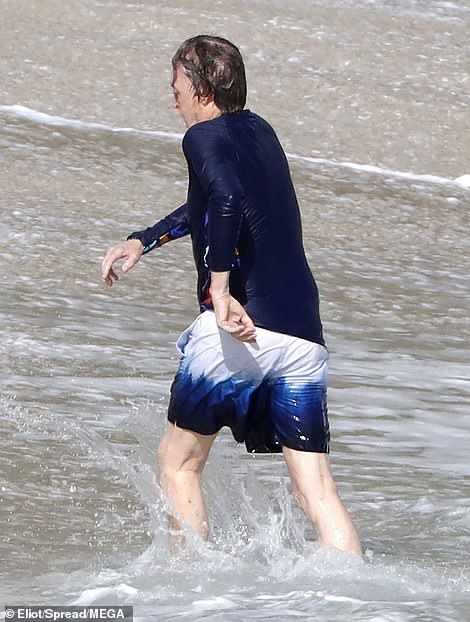 Surf’s Up: The Beatles legend ran along the sand, ready to jump into the water as the waves broke onto the shore 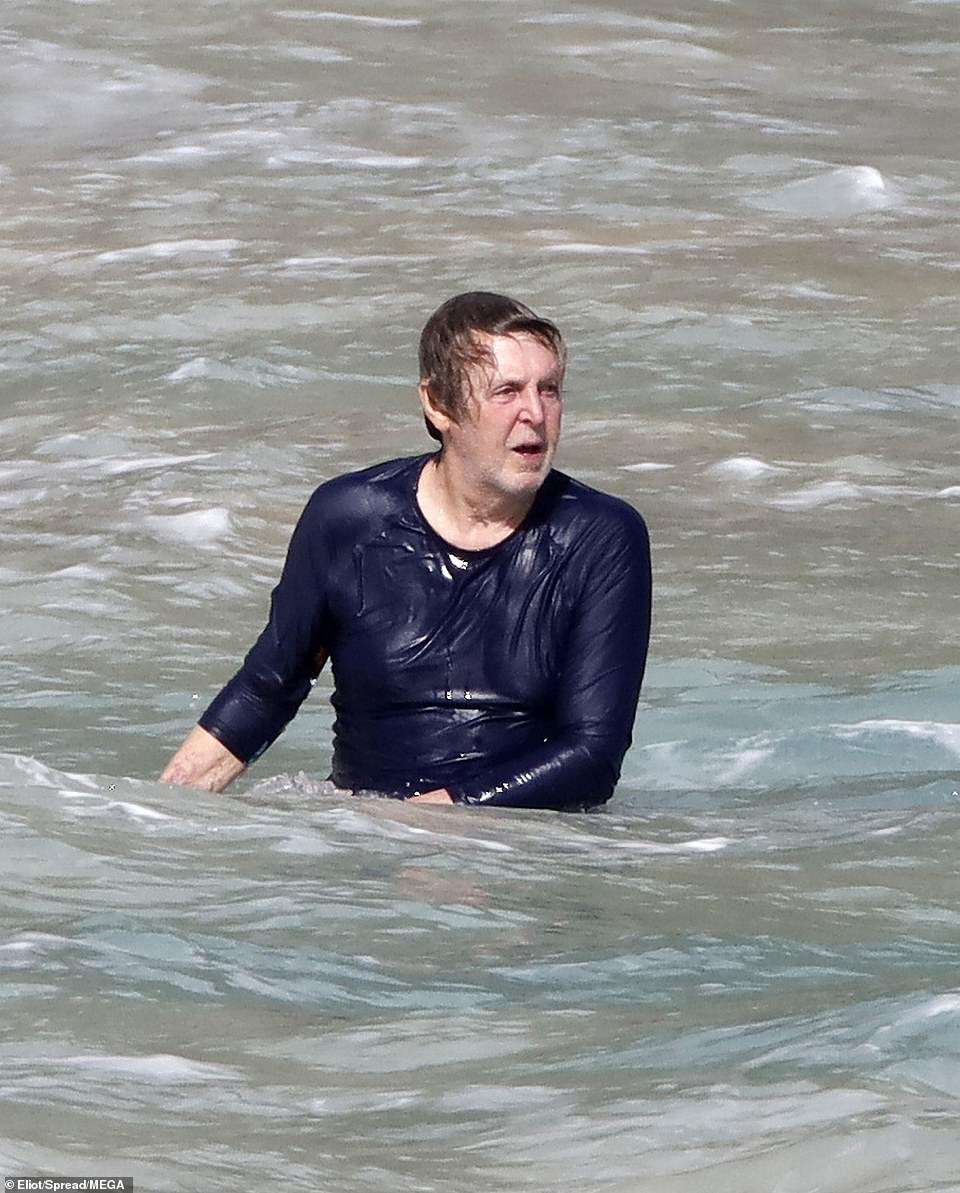 Keeping active: The star seemed to enjoy the challenge of diving into the waves as they approached

A source told the publication: ‘Paul is already in an extraordinarily exclusive set of people at the very top of the honours system.

‘There is now quiet talk among officials about how to mark his 80th with something truly special. The idea of offering him the chance to sit as a cross-bencher in the Lords has been mooted.

‘He has given incredible service to British culture, so it could be a very fitting tribute and mark of all that he has done for his country.’ 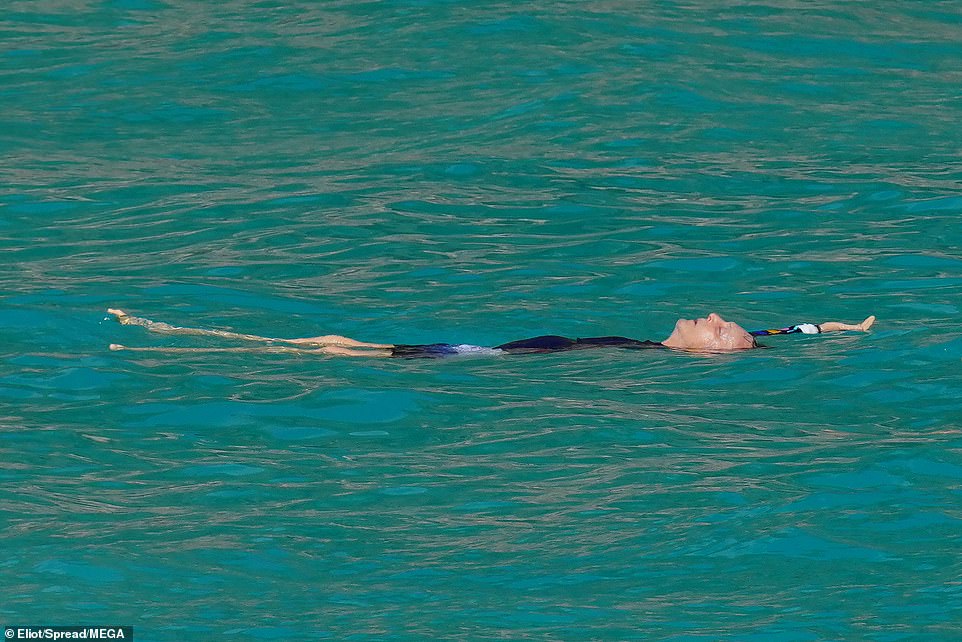 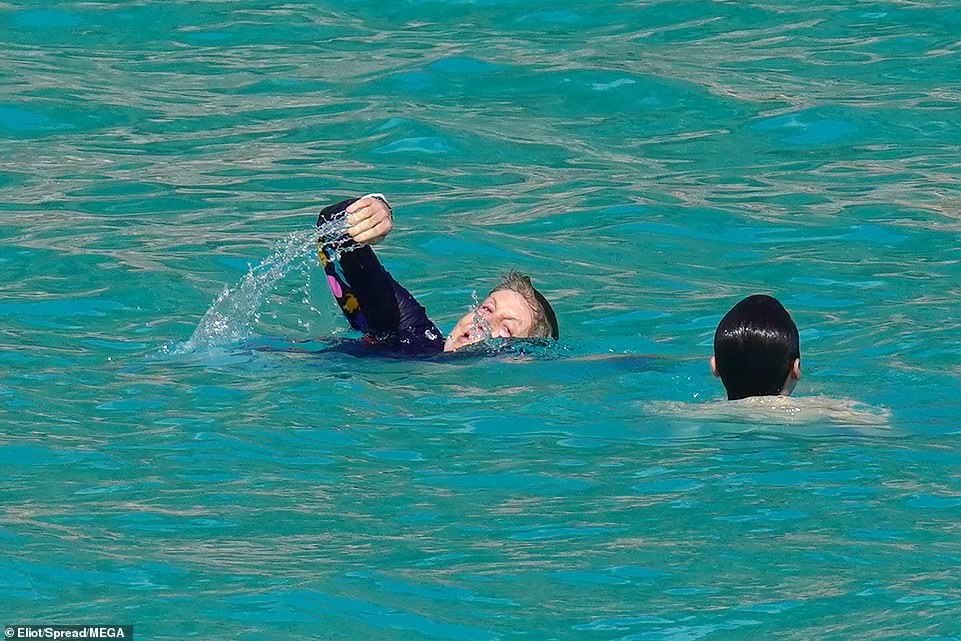 Fighting fit: He got some exercise in and performed a a variety of swimming strokes as Arlen swum nearby during their break away 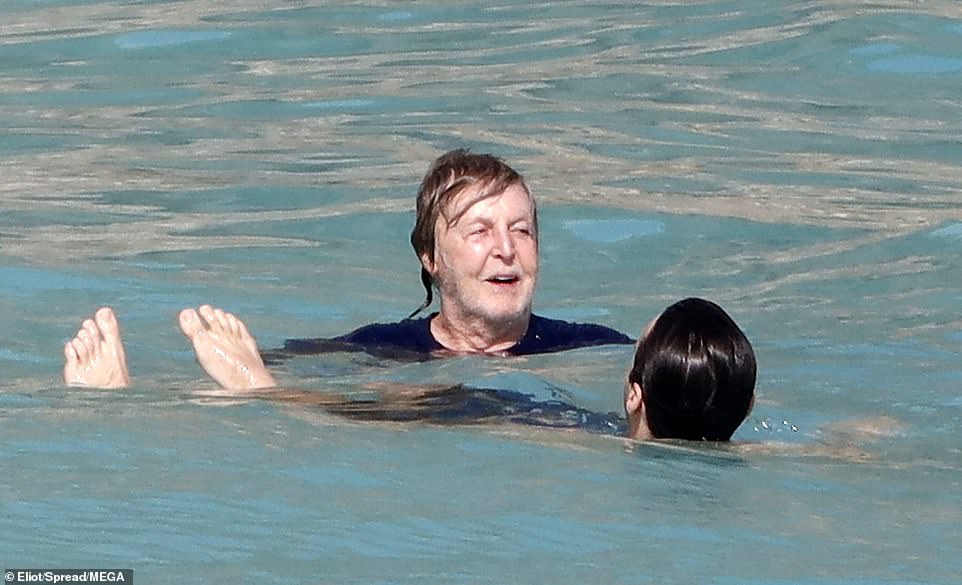 Putting their feet up: Arlen bobbed along as he floated on the water next to his step-father Sir Paul as the pair spent some quality time together 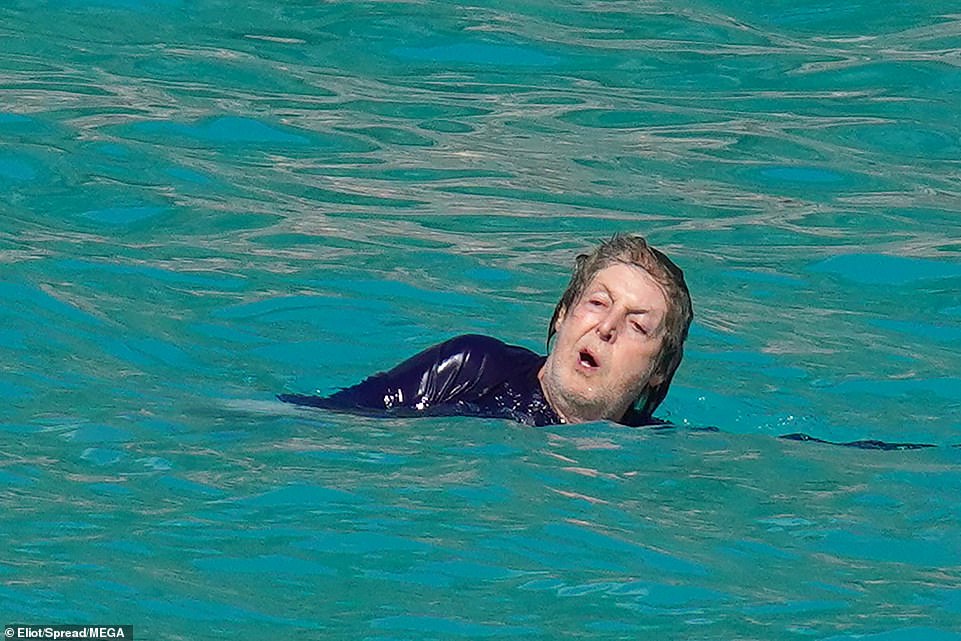 Coming up for air: He gasped for air as he swum in the warm water which gently rippled around him

His knighthood was upgraded in 2018 to admit Sir Paul to the even rarer Order of the Companions of Honour – of which there are only 61 living members.

At the time Sir Paul said: ‘I see this as a huge honour for me and my family and I think of how proud my Liverpool mum and dad would have been to see this.’ 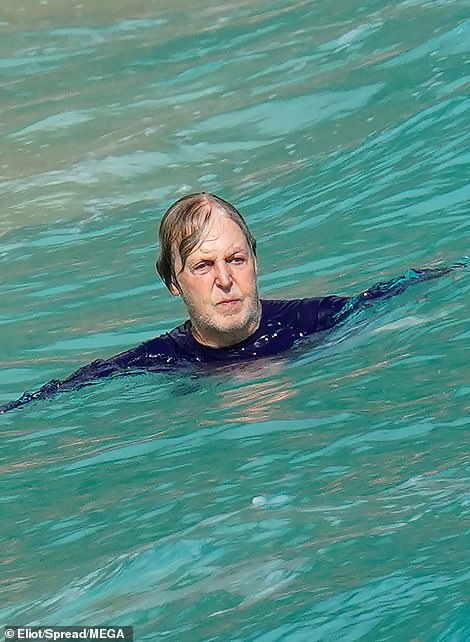 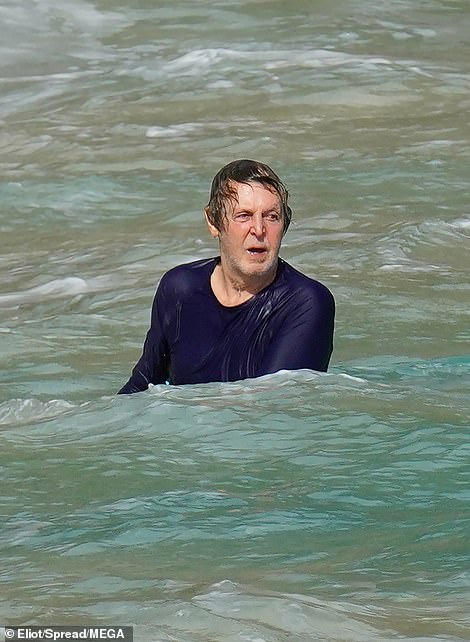 Honoured: The Beatles legend could be made a Lord in recognition of his lifetime of musical achievements and service to British culture in time for his 80th birthday this summer 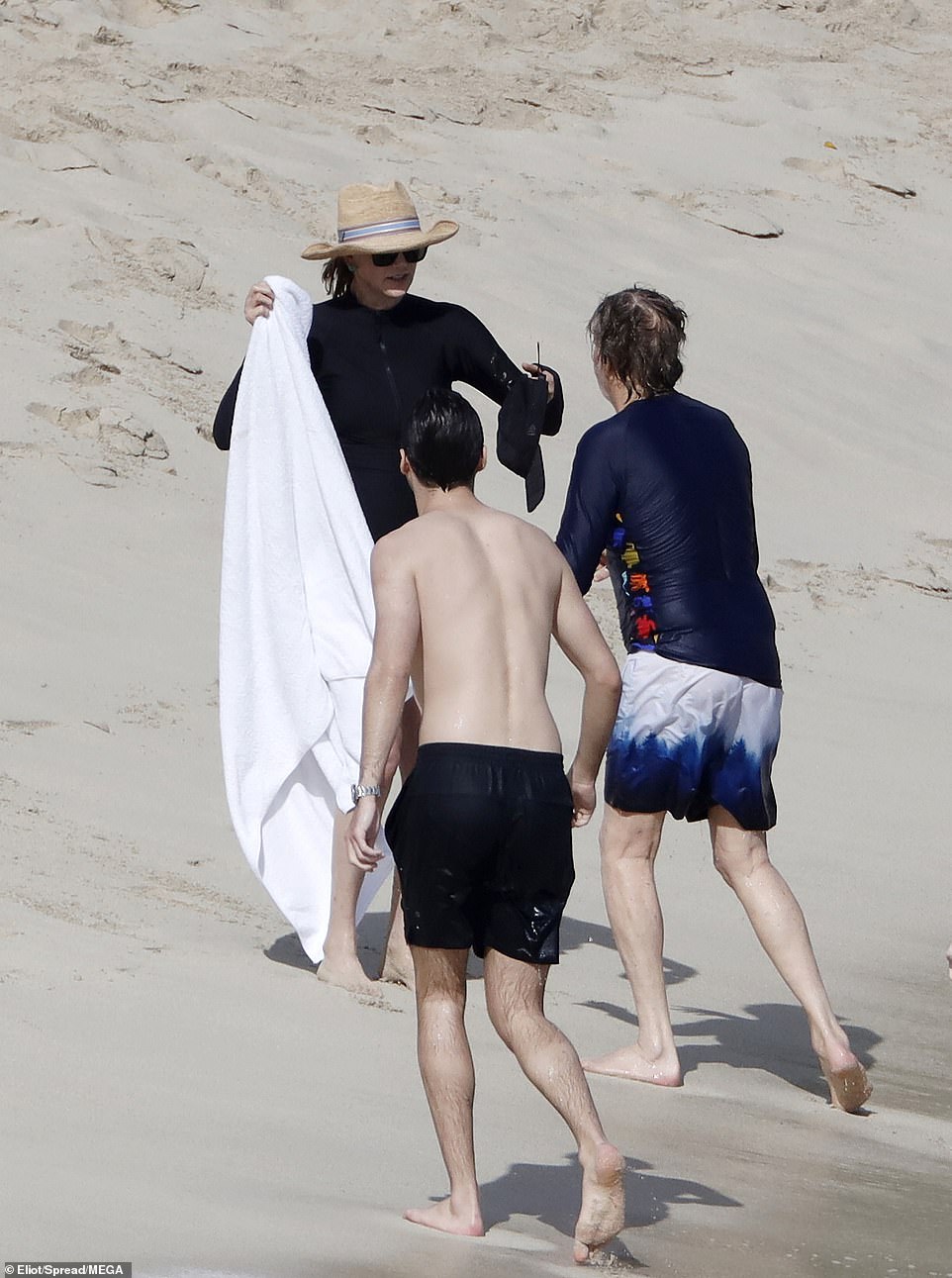 Doting wife: Nancy brought Sir Paul a towel so he could keep himself warm and a pair of sandals as he headed back onto the beach with Arlen 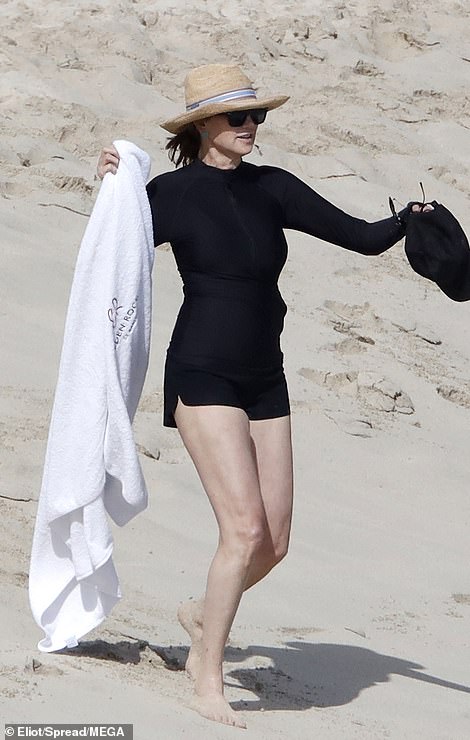 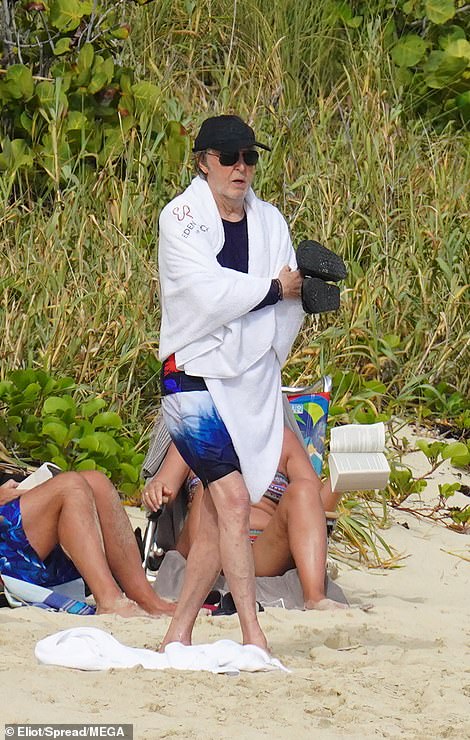 Family day out: Nancy was on hand to help Paul dry off after his swim 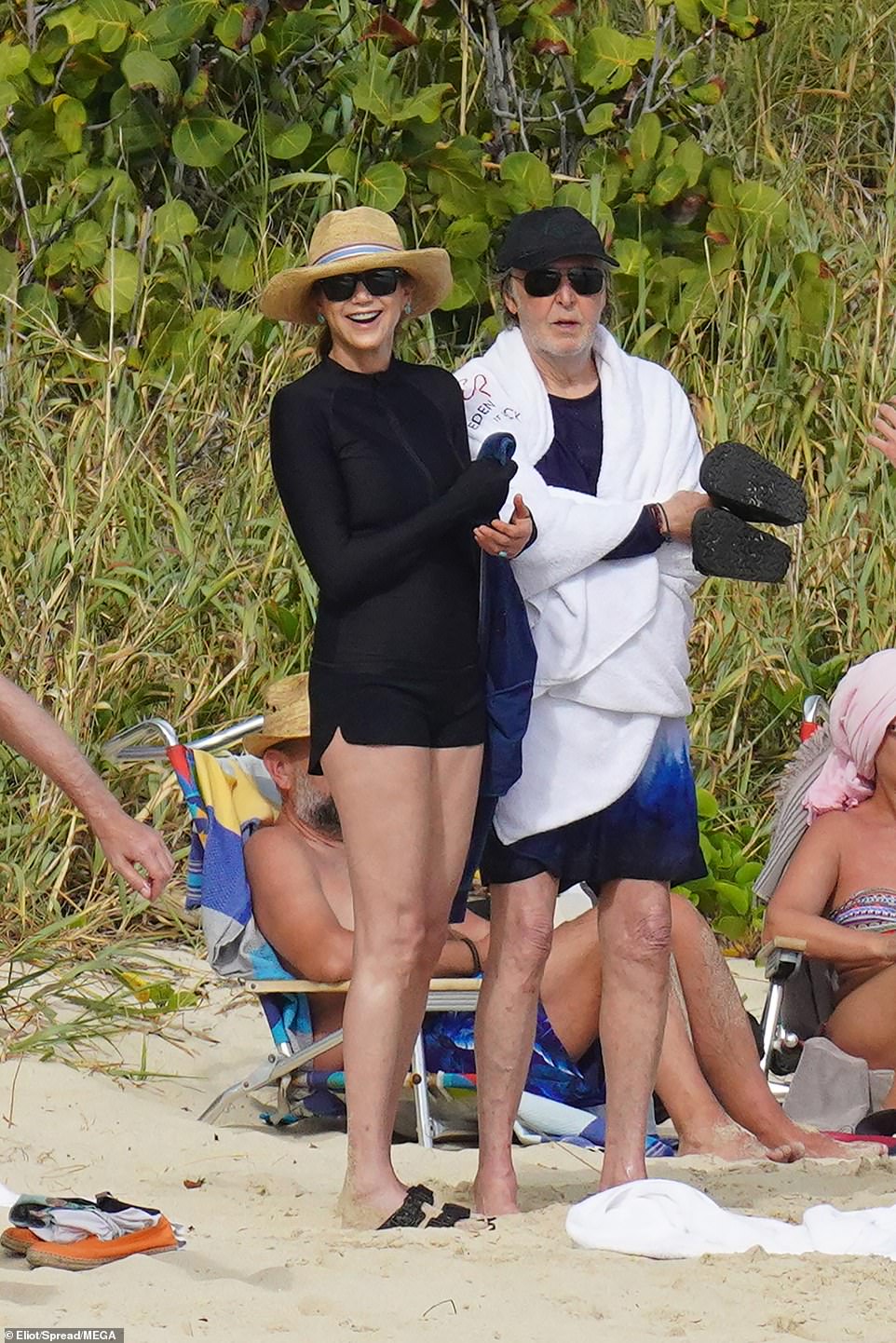 All smiles: Sir Paul and Nancy smiled as they stood alongside one another on the beach

It comes as Sir Paul is set to headline at Glastonbury a week after turning 80 making him the oldest act to ever headline the west country festival.

He confirmed he will headline the prestigious festival by sharing a cryptic post on his Twitter page last month.

The musician’s tweet showed a score for popular online puzzle Wordle along with six green squares, which read: ‘Wordle 121 25/6’.

Eagle-eyed music fans noted that Wordle scores only consist of five letters, sparking speculation that the word Macca was referring to was in fact ‘Glasto’.

Others noticed that it is 121 days from today until the festival and 25/6 was predicted to represent Saturday June 25 – the day the star will perform. 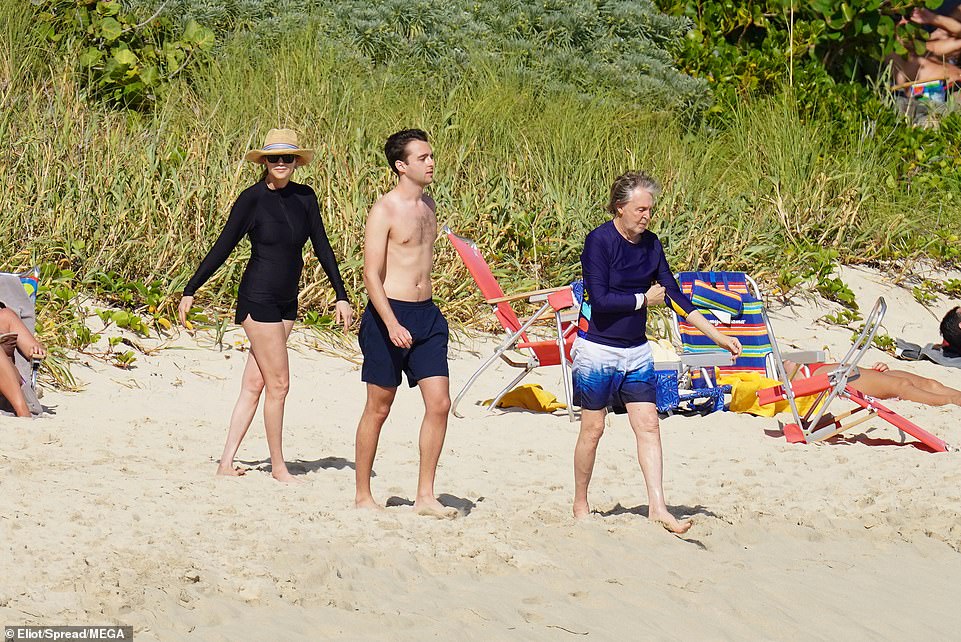 Family affair: Sir Paul and Nancy hit the beach with Nancy’s son Arlen, 29, from her relationship with politician Bruce Blakeman