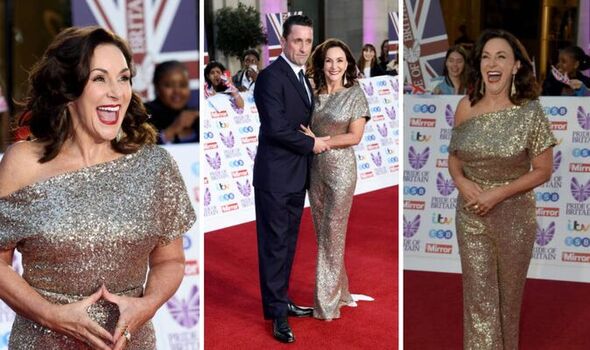 The dancer turned up alongside her beau, Daniel Taylor.

Shirley Ballas, 62, has turned up to Pride of Britain’s red carpet ceremony alongside her partner Daniel Taylor. The couple was dressed glamorously as they appeared at the national award ceremony.

The Strictly Come Dancing judge dazzled in a one-shouldered gold sparkling jumpsuit as she arrived on the red carpet at London’s Grosvenor House tonight.

She accessorised her show-stopping look with a pair of dangling gold earrings and elevated her frame with dark heels, which were hidden beneath her flared trousers.

Shirley accentuated her natural beauty with stunning strokes of mascara and a bold red lipstick.

The dancer styled her brunette tresses loosely in voluminous curls as she posed up a storm with her beau, 48.

Daniel – who is thirteen years her junior – cut a suave figure in a black suit and tie as he wrapped his arms around Shirley on the red carpet.

The couple have a thirteen year age gap between them.

Her brunette tresses were styled loosely in thick curls.

They first went public with their relationship in March 2019 after meeting doing panto in November 2018.

Late last year, it was reported that Shirley is set to marry for a third time as her boyfriend Danny has purchased an engagement ring.