Prince George and Princess Charlotte joined their parents for the Princess of Wales’s Christmas Carol Concert at Westminster Abbey on Thursday, and their interactions with other members of the royal family were seen on camera.

WATCH: George and Charlotte greet grandpa Charles with a kiss

Both George and Charlotte reached out to put their arms around their grandfather, as the King knelt down to kiss his grandchildren. Following her husband, Camilla could also be seen greeting her step-grandchildren affectionately.

Charles has five grandchildren – including Prince William and Kate’s children, Prince George, Princess Charlotte and Prince Louis, as well as the Duke and Duchess of Sussex‘s little ones, Archie, three, and one-year-old Lilibet.

The then future monarch was spotted dancing with Prince Louis, four, during the Platinum Jubilee celebrations in June. Charles ascended the throne in September, following the death of his mother, Queen Elizabeth II.

Meanwhile, Camilla is grandmother to five grandchildren from her first marriage to Andrew Parker Bowles. Camilla married Andrew in 1973, and they had two children, Tom Parker Bowles and Laura Lopes. Laura has three children, Eliza, and twins Gus and Louis, while Tom has two children, Lola and Freddy. 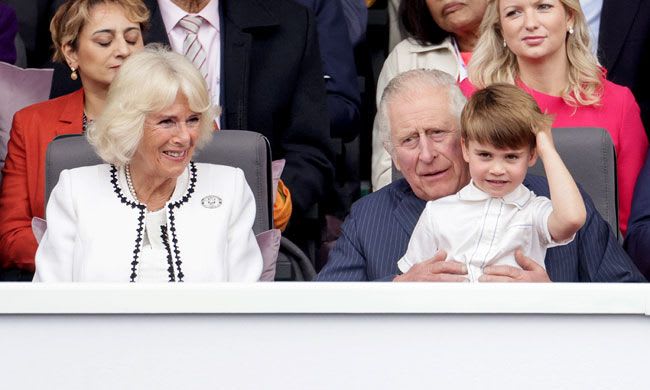 It has been confirmed by Buckingham Palace that Charles and Camilla will spend Christmas at the Sandringham estate in Norfolk.

William and Kate and their children are likely to also celebrate the festive season with the King and Queen Consort in Norfolk, given that they typically spend the school holidays at their nearby home, Anmer Hall.