Rylan Clark shed light on his feelings over his public image and his boozy antics during an appearance on Alan Carr’s podcast on Monday.

The TV star, 33, appeared on the Chatty Man host’s Life’s A Beach podcast, where he laid bare his fears that he could be seen as ‘an a**ehole’ to the public and also discussed his drunken holiday antics in a candid chat.

The release of the backdated interview comes just one day after Rylan received an outpouring of support from a legion of stars in the wake of the release of a video showing him ‘demanding gear’ during a night on the town. 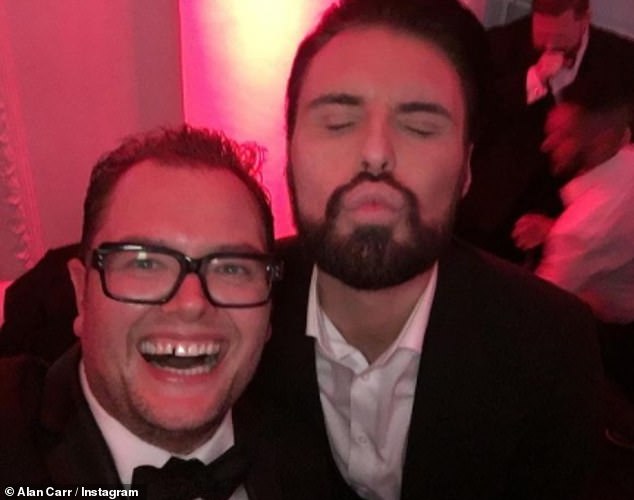 Open and honest: Rylan Clark shed light on his feelings over his public image and his boozy antics during an appearance on Alan Carr’s podcast on Monday

Alan’s podcast features stars chatting about their holiday experiences, past trips and upcoming jaunts, peppered with anecdotes about their lives.

Rylan, who announced his divorce from husband Dan Neal in June last year, spoke about his reluctance to complain ‘because of his job’, as he admitted he lives in fear of ‘being called an a**ehole’ or being sold out to the press.

He said: ‘I am not a complainer. I get embarrassed if I complain. If I go to a restaurant and it’s s**t I say let’s just pay it and go. I think that’s because of my job. I’m so worried, so if I say “This is disgusting”, they’ll say “That Rylan was an a**ehole”‘.

Additionally, Rylan detailed what he likes to drink on holiday, saying if he flies with British Airways, dependent on class, he will ‘try everything’, while also revealing he was drunk on his return flight from Dubai after X Factor Judges’ Houses in 2012. 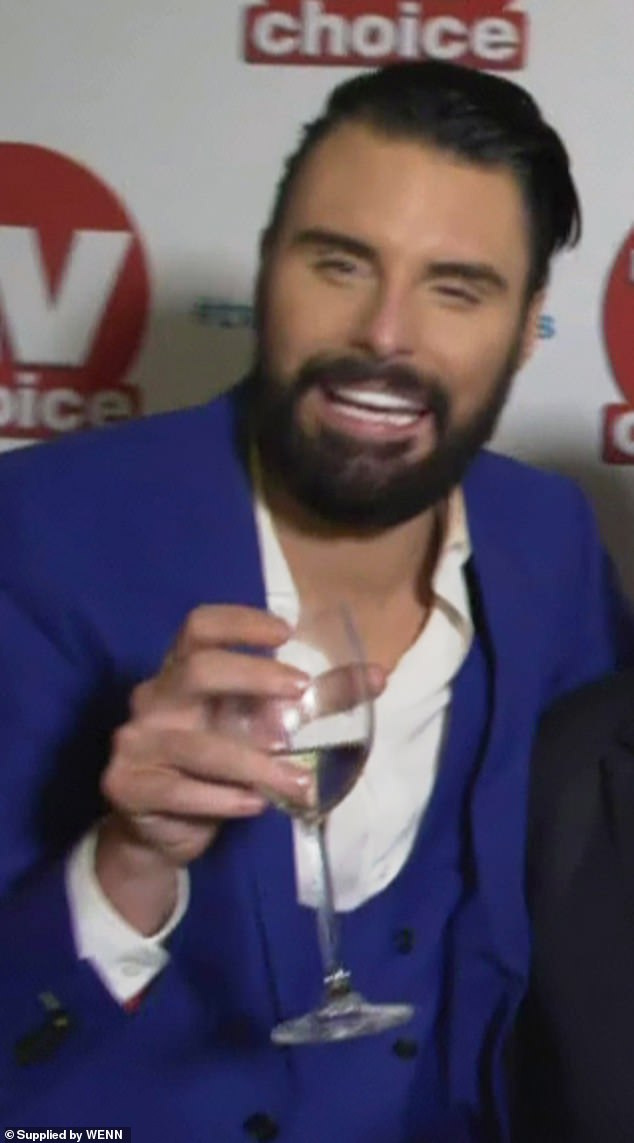 Cheers! He was asked about his holiday drinks of choice as well as speaking about his reluctance to complain

While Alan did not specify when the chat was recorded, the release is timely following the Rylan’s appearance in the news and on social media over the weekend.

In The Sunday Mirror video, Rylan was seen saying ‘give me the f**king gear’ however upon spotting he was being filmed, Rylan promptly remarked: ‘Delete that now or I will f*****g kill you!’, though the star was smiling at the time.

There is no suggestion Rylan obtained or took drugs.

On his concerns over complaining, he went on: ‘I just go with the flow. I can’t complain and I get embarrassed if I’m with someone and they moan… 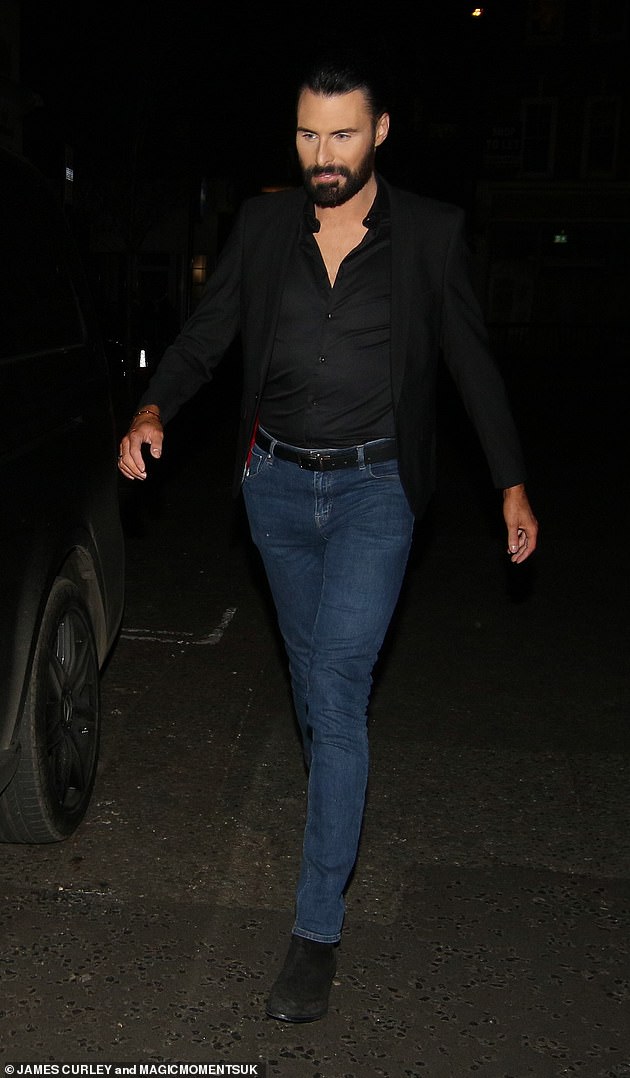 Filmed: The release of the backdated chat comes just one day after Rylan received an outpouring of support from a legion of stars in the wake of the release of a video showing him ‘demanding gear’ during a night on the town (pictured leaving Claridge’s on Saturday)

‘But if it’s a meal in a restaurant of something and it’s not great [I don’t say anything]. If the chicken is pink fine, send it back but I’m not a complainer. I’d rather pay it and get McDonald’s on the way home…

‘We always have it in the back of our mind that someone’s gonna go ‘a**ehole’ and it could be completely valid.’

It comes weeks after Rylan admitted he was a ‘danger to himself’ following the breakdown of his marriage to husband Dan last year, which saw him take a highly-publicised step away from the spotlight.

He fleetingly touched on his divorce in the chat, as Alan asked: ‘Why don’t you buy your own plane?’, before he simply stated: ‘Divorce babes’, in a nod to Adele’s return to the spotlight and now famous line when asked about her new album.

Alan mused that he imagines Rylan enjoys a glass of champagne before moving on to gin and tonics and then a panini during plane journeys. 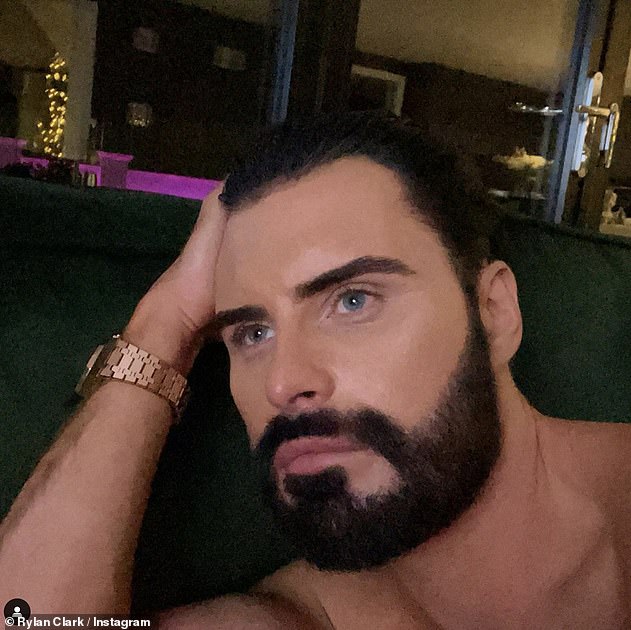 Honest: The TV star, 33, appeared on the Chatty Man host’s Life’s A Beach podcast, where he laid bare his fears that he could be seen as ‘an a**ehole’ to the public and also discussed his drunken holiday antics in a candid chat

Rylan then went into discussing his Judges’ Houses stay at the Jumeirah Zabeel Saray, where he detailed their return to the UK.

He said: ‘Actually I was staying in a royal residence. We really lucked out our year, we had full shebang. That’s when X Factor had a bit of money…

‘I will tell you a little thing that p**sed me off slightly. You check in on the first class lounge, go left on the plane, you do a bit of filming at the bar then they send you to economy! To be fair I was drunk on the plane.’

He also embellished on his time at Judges’ Houses, including an anecdote about drinking with the late Caroline Flack and production crew/

He regaled: ‘We stayed at the Jumeirah Zabeel Saray. I was a little dreamer and I’d never been anywhere like that and I’ll never forget that the night after we performed, we were split in to two groups of three… 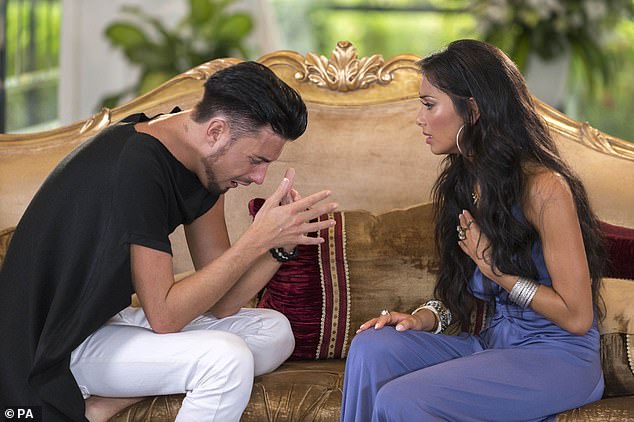 An honour: He revealed he was drunk on his return flight from Dubai after X Factor Judges’ Houses in 2012

‘They’d be like of course and they’d bring you a bottle of Absolut and a bottle of coke and I’d be like can I have a normal one and they say no that’s what they’d do here….

‘Then they had a Hermes toiletries and on the last day the brought me a massive box of them that I slid in my case!’

When asked about his other drinking and travelling antics, he said: ‘Depends what airline I’m on, If I’m on British Airways good luck to them all. If I’m on a nice class I do like a little bit of this and a bit of that.

‘If I’m on the old Rylan [Ryan Air] or EasyJet, I am hoodie up ordering the cheese and ham panini and I order that as soon as I sit down otherwise I’m sitting there with a Nature Valley bar’ before joking: ‘I’m famous!… 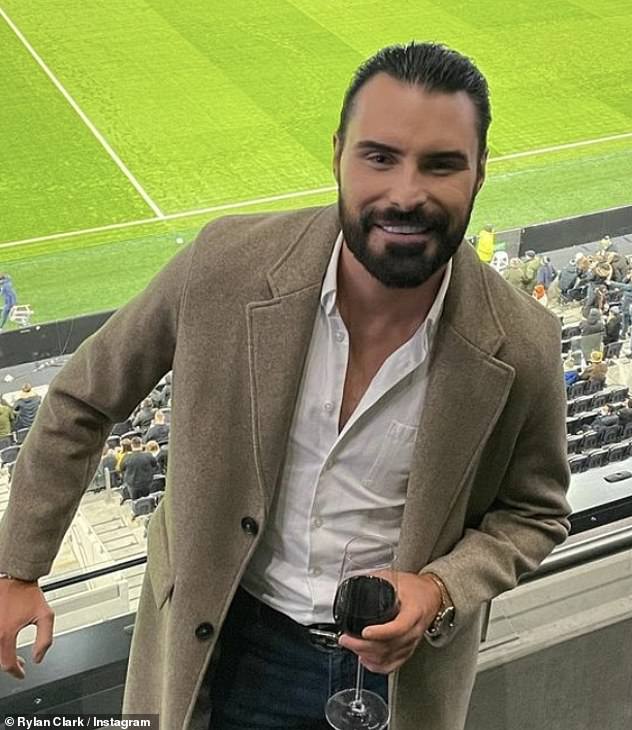 Sweet: Rylan was his usual dazzling self on the cheek podcast

‘I don’t care if Julia and her six kids want a toastie! I’m like Samara from The Ring jumping out of that well going down the aisle saying stick that in the microwave darling!’

In another anecdote from his marriage, he went on: ‘Two or three years ago I went to Tel Aviv for Eurovision. I don’t know how to say this without sounding dirty but I was walking around with a semi most of the time!…

‘It was door to door looks. I mean stunning. Cant wait to go back! But obviously I was married at the time so it was never anything like that. But you can look! I was looking around thinking everyone is so beautiful around here I do not fit in.’

He then detailed a story about his manager – who is of Iranian descent – being stopped at customs. 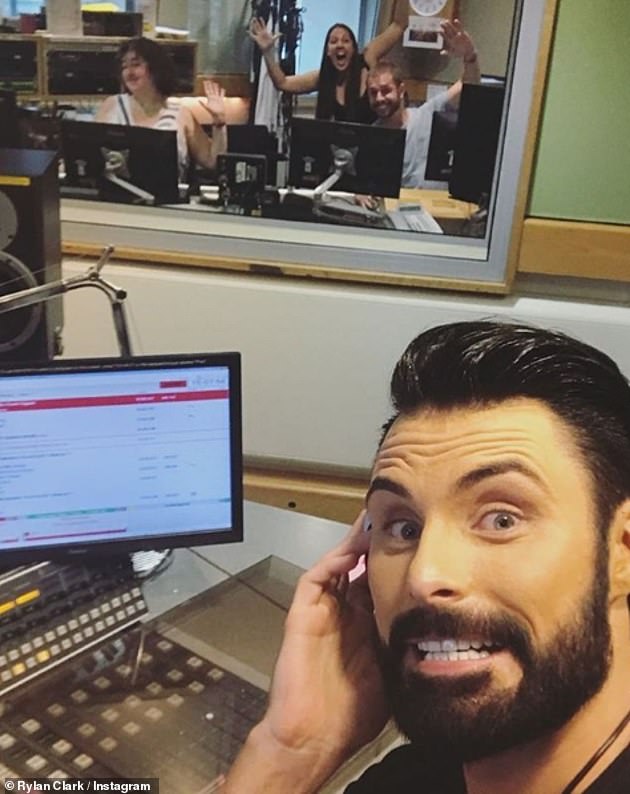 Wow! The TV personality won huge support from stars in the wake of the video’s release

Recalling his honeymoon, he said: ‘I don’t mind travelling, I’ve been to the Maldives – went on my honeymoon but it was the nicest place…

‘I’ve seen photos and obviously they’re very beautiful but until you go somewhere like that – and i was very lucky to go there – oh my good god. the photos look like Dagenham compared to what its like in real life…

‘That’s no shade to Dagenham I lived there for a year. Its just beautiful but to me somewhere like that is a special treat like honeymoon or anniversary….

‘It’s such a f**king long flight. I’m happy with a bit of Spain – Canaries – four hours I’ll deal with it, I wouldn’t mind going to Iceland.’ 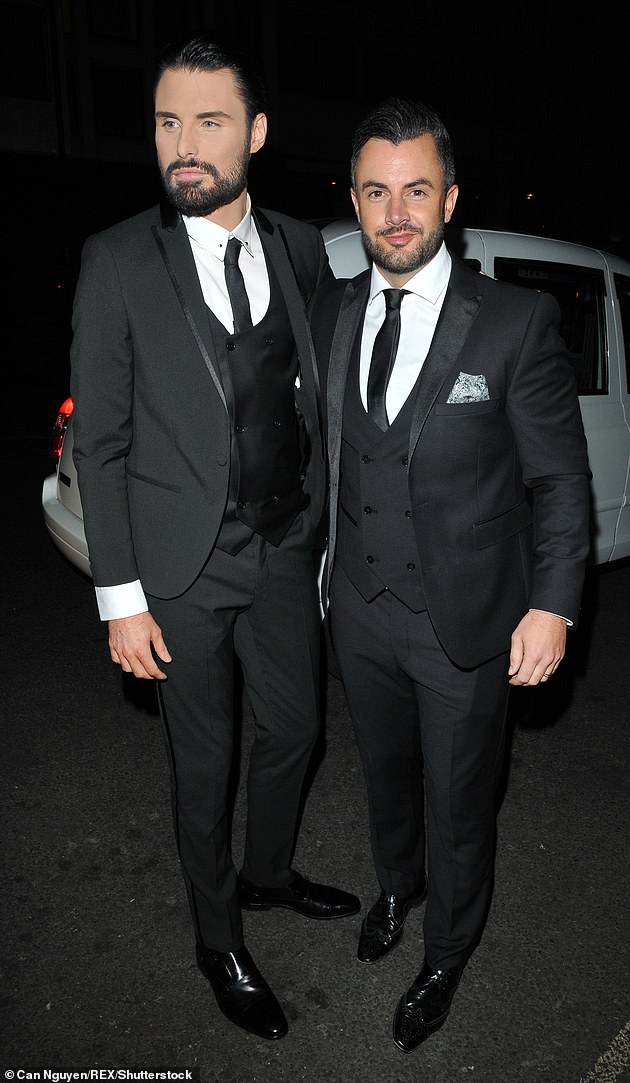 Split: In the interview, he was heard recalling his honeymoon, he said: ‘I don’t mind travelling, I’ve been to the Maldives – went on my honeymoon but it was the nicest place’ (pictured with Dan in 2017)