Rosie Huntington-Whiteley gave Instagram followers a fleeting glimpse at her latest winter break on Tuesday – and it was nowhere near her childhood home in south-west England.

The Devon-born model and actress showed off her incredible post-pregnancy physique in a vibrant red bikini while cradling 10-month old daughter Isabella as she made the most of what appeared to be a tropical island getaway. 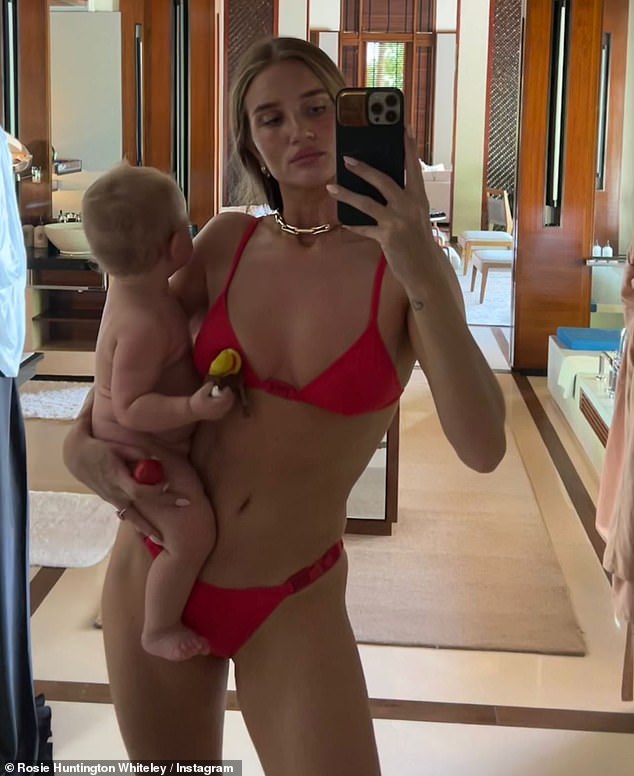 Looking good: Rosie Huntington-Whiteley showed off her post-pregnancy physique as she cradled 10-month old daughter Isabella during a winter break on Tuesday

The fashion-conscious star also touched on her taste for the finer things, among them a stylish Prada bucket-hat, worn over a loose-fitting Chanel shirt as she once again displays her toned figure in another skimpy two-piece.

Rosie later modelled a tasteful summer dress in another selfie, this time opting for a black and white filter as she posed with Isabella in front of a full-length mirror. Striking: Rosie later modelled a tasteful summer dress in another selfie, this time opting for a black and white filter as she posed with Isabella in front of a full-length mirror 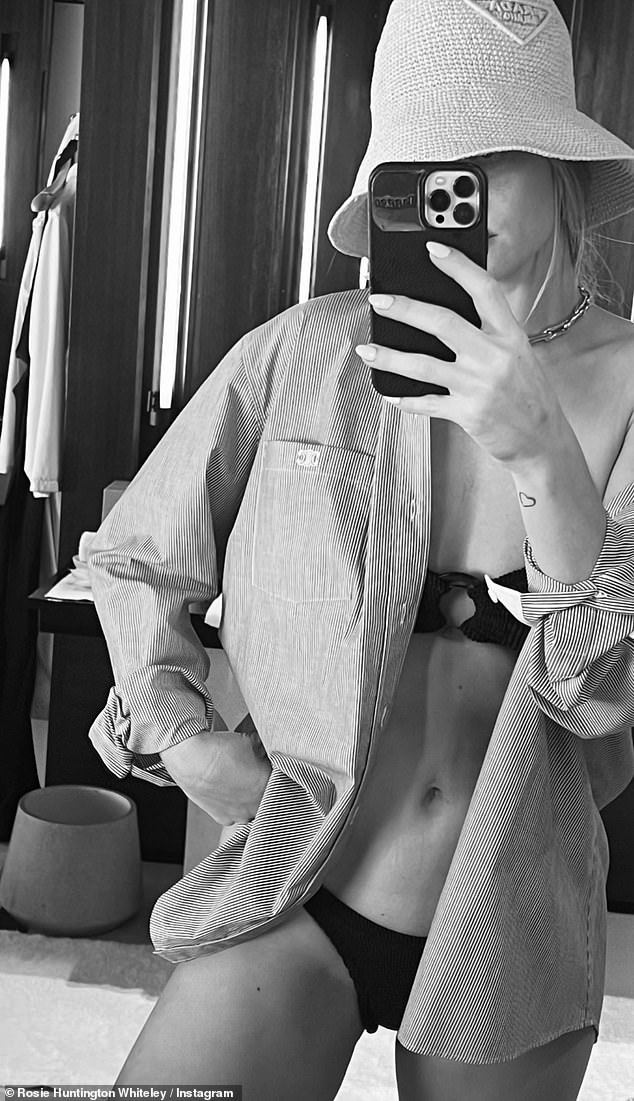 Lovely: The fashion-conscious star also touched on her taste for the finer things, among them a stylish Prada bucket-hat, worn over a loose-fitting Chanel shirt and skimpy two-piece bikini

The couple have been together since 2010 and announced their engagement in 2016, but previously admitted they are in no rush to walk down the aisle until their children are older.

‘I think it will be fun to do it when the baby’s [Jack] grown up a bit and he can be involved in the wedding.’ 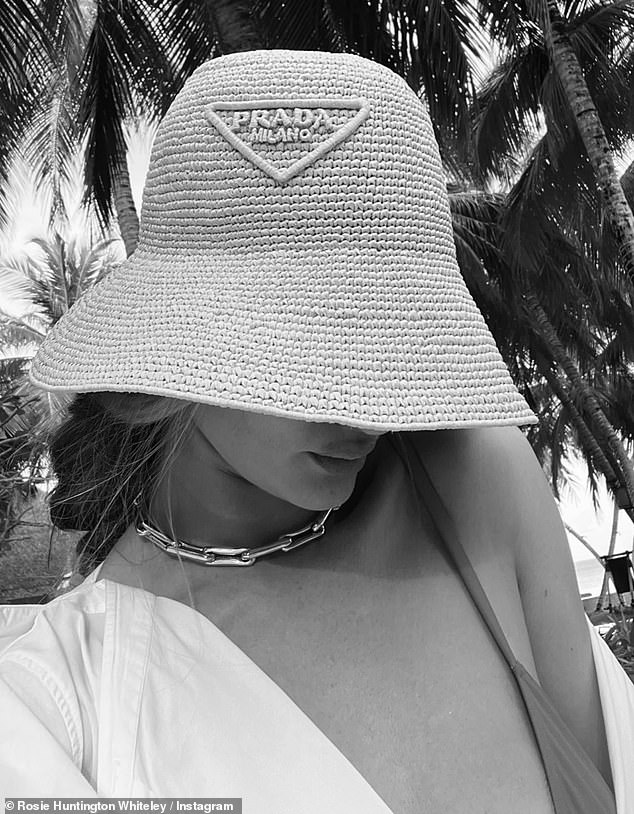 Strike a pose: Rosie showed off her Prada hat while relaxing at an undisclosed location 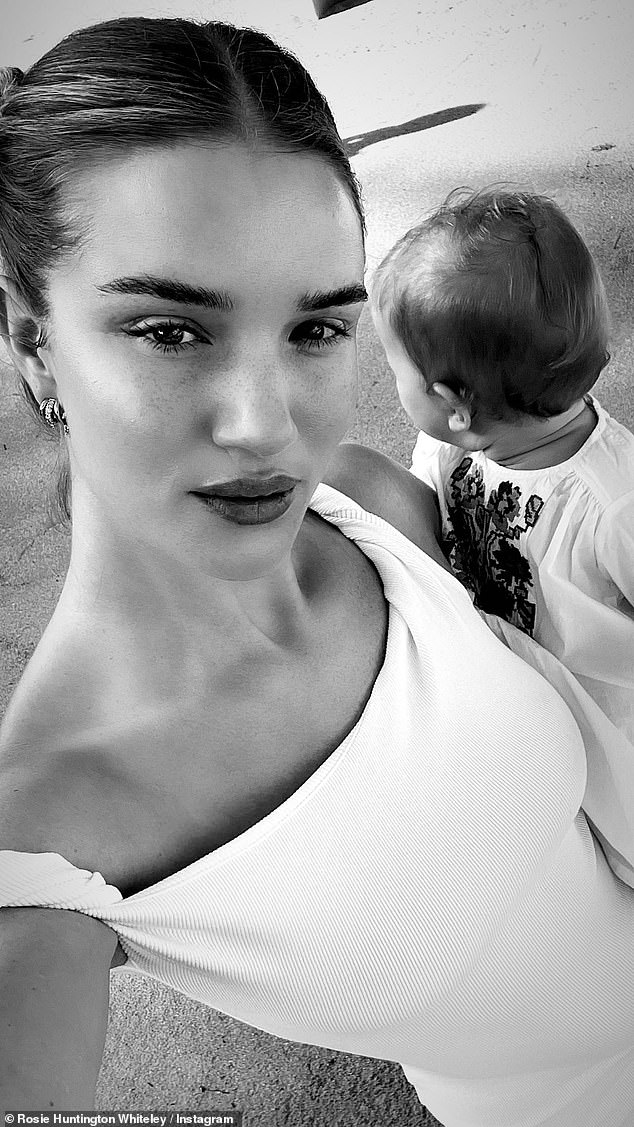 Model mother: The British supermodel showed off her stunning looks as she posed for a selfie with gorgeous Isabella

Rosie has previously described the ‘shift in identity’ she experienced after becoming a mother, which felt like ‘mourning the loss of [her] old life’.

Speaking in an interview with Net-A-Porter’s PORTER magazine last year, she explained: ‘For a period after I had my first son, there was a real shift in identity, and a sort of mourning of the loss of your old life, and who you were.’

Expanding on the transition from model to mother, Rosie added: ‘I just remember feeling like the rug was pulled out from underneath me.

‘I’d had all these years of being really independent, being able to come and go as I wished, being self-employed to a degree, calling the shots, and then suddenly having [something] that really anchored me to home life.’ 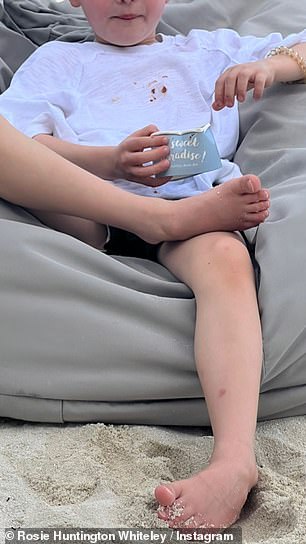 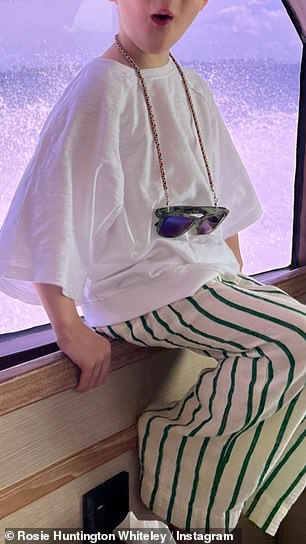 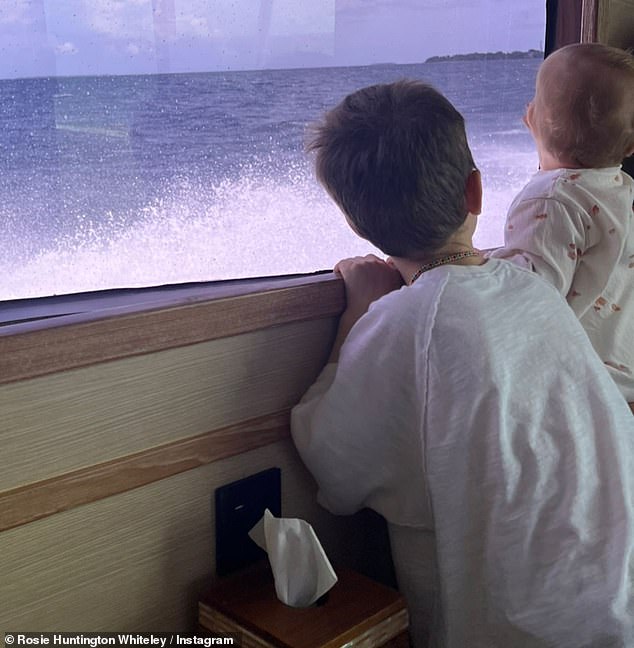 Making memories: Jack and Isabella featured alongside one another as they admired the coastal view during their picturesque speedboat

Rosie explained she eventually ’embraced’ her new role and learned not to attach so much of her identity to the way she looked.

She said: ‘If you’re someone that, like me, attach[ed] a lot of identity to my physicality and the way that I felt and looked, it really took me a long time to come around.

‘But I think once I stepped into the role, embraced it, everything sort of relaxed a little bit. I did start to feel this new sense of life.

‘And now, in my thirties, my confidence is so much [greater] and my ability to make decisions and not second-guess myself is stronger. I genuinely feel like my life is much more well-rounded.’ 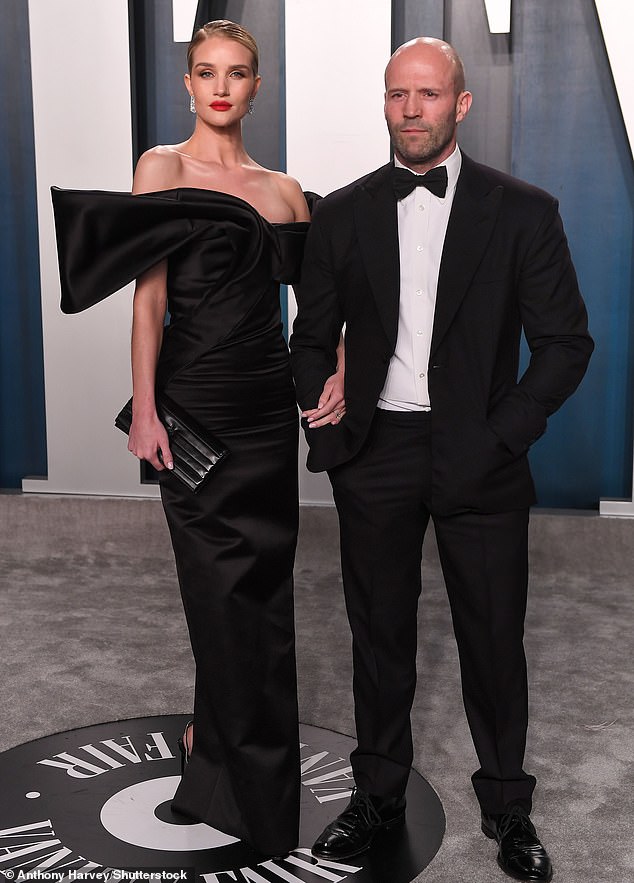 A-list couple: Rosie raises Jack and Isabella with her fiancé, acton star Jason Statham. The couple have been together since 2010 and got engaged in 2016 (pictured in 2020)