Robbie Williams is reportedly risking the wrath of his neighbour Jimmy Page by planning to erect a £2 million fence at his Holland Park mansion in London.

The singer, 48, is said to have submitted an application to Kensington and Chelsea council to put up the wooden trellis on three sides of the property.

In the document, it is claimed that ‘one shortcoming of the property is that proper privacy is lacking’, according to The Sun. 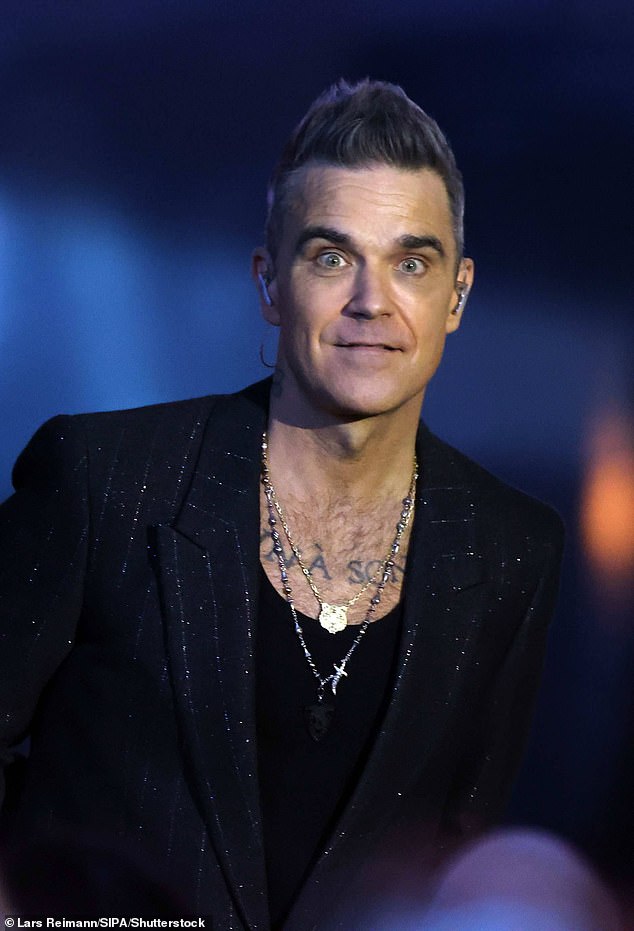 Eek! Robbie Williams is reportedly risking the wrath of his neighbour Jimmy Page by planning to erect a £2 million fence at his Holland Park mansion in London (pictured in November 2022)

In a Heritage Statement costing £238.20, Barton Engineers allegedly said: ‘Wall elevations are low and allow passers-by a view of the garden.

‘As part of a landscaping scheme, the designer has proposed the use of trellis panels as a low-impact way of increasing the privacy within the garden.

‘It is our view that said intervention will have negligible impact on the heritage value of the property.’

The Garden Trellis Company of Clacton, Essex, will begin and finish their work early next year. Robbie’s application will be determined on by January 19. 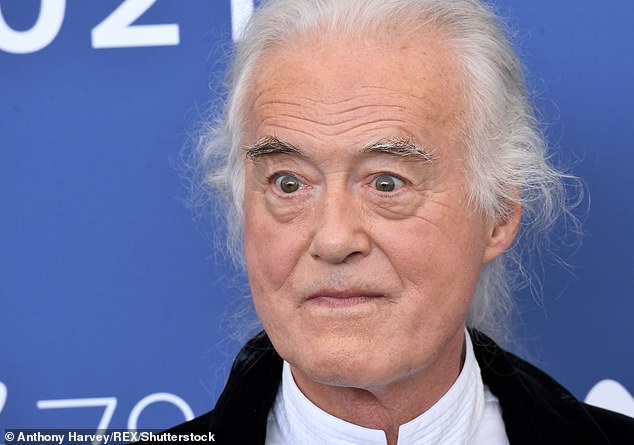 Oh dear: The singer, 48, is said to have submitted an application to Kensington and Chelsea council to put up the wooden trellis on three sides of the property (neighbour Jimmy is pictured)

Robbie’s representatives have been contacted for comment by MailOnline.

Last month, the Angels hitmaker risked reigniting tensions with Jimmy again with a bid to chop down trees close to their shared fence.

The rockstars have been locked in a bitter row for seven years, sparked when the ex-Take That star lodged plans to add an underground pool to his Grade II Listed home.

Now the pop star’s plans to bulldoze two trees and chop back another four could spark tensions between the warring houses again.

Several lie close to the singer’s boundary with Page, founder of the rock band Led Zeppelin. 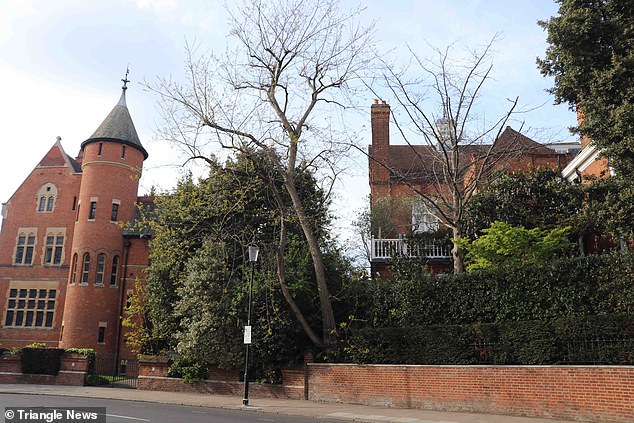 Troublesome: Last month, the Angels hitmaker risked reigniting tensions with Jimmy again with a bid to chop down trees close to their shared fence (L-R: Jimmy and Robbie’s houses)

An inspection of the trees by the Royal Borough of Kensington and Chelsea is expected to be completed shortly with a decision due later this month.

Williams plans to totally fell a heavily leaning magnolia, said to be in an unsuitable position, and grind the stump, totally removing all trace of it.

A cherry tree leaning over a footpath will also be getting the chop as it is felled to ground level.

The singer hopes to thin a bay tree in his front garden by 20 per cent to allow for light penetration and cut back the neighbouring trees by up to 1.5 metres.

A horse chestnut is also set to be thinned out – with one over-extended branch to be cut back by five metres and the rest of the canopy being subject to a 15 per cent thin as he removes dead and defective wood.

A Chinese ash will further be thinned by up to 20 per cent as Williams battles to allow light penetration and retain the form of the tree.

A Loquat, an evergreen shrub prized for its orange fruit, will also be cut back by up to 1.5 metres.

The Candy singer’s garden is shown to include vintage limestone paving, overlooked by a bay window.

A circular path in the corner of the property is made of magma granite to match the borders of shingle paths circling his house and at the back of the property.

Other sections are lined with cedagravel mats while cut-faced Yorkshire paving steps lead away towards the front of the garden.

The Led Zeppelin guitarist was allowed to prune trees at his luxury pad in June – just a month after Robbie was denied permission to cut one back.

Page, 78, submitted plans on April 21 to reshape a Bay tree in front of his Grade I listed pad.

It was approved a month later with the council calling works ‘routine maintenance.’

This will only fall through if Page finds bats or birds nests in the tree that he would damage by cutting it back. 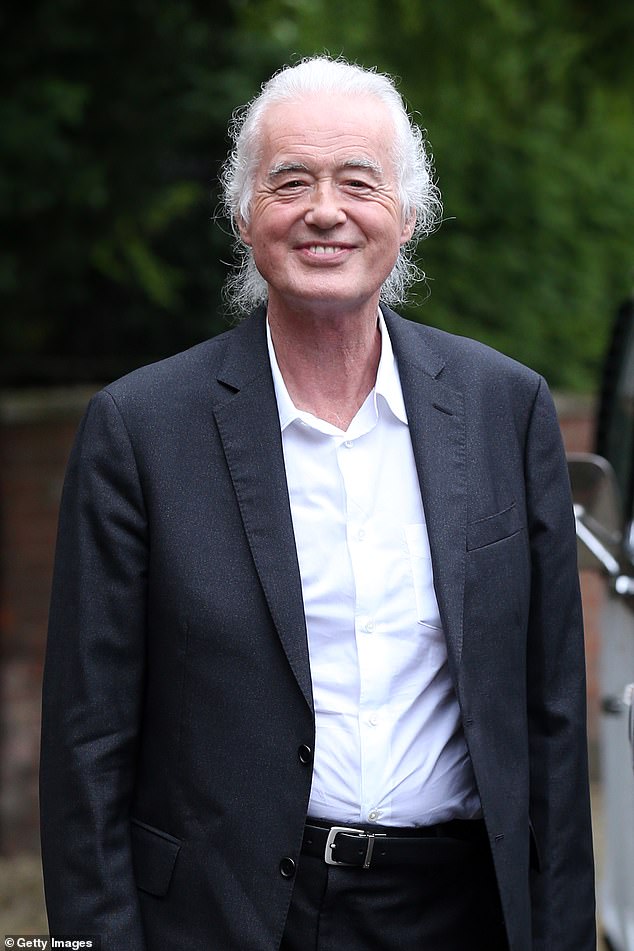 Victory: Led Zeppelin guitarist Jimmy was allowed to prune trees at his luxury pad in June (pictured in 2018)

The Royal Borough of Kensington and Chelsea said: ‘The Council raises no objection to the proposed work.’

Just two weeks before Page submitted his application, Williams was denied planning permission to cut back a 70ft Robinia tree in his garden.

This was despite the sprawling monster destroying his garden wall, obscuring a street light and being rotten at the base.

But officials working under delegated powers dismissed his application, claiming Williams, 48, had not provided evidence of the extent of the decay.

They even suggested Williams rebuilds and moves his cracking boundary wall to allow the tree to grow more.

Amanda Reid, the council’s Director of Planning and Place, ruled: ‘If there is decay at the base of the tree, this extent of decay needs to be quantified before the removal of this high amenity TPO’d tree can be considered.

‘If the tree is causing the wall to crack, this problem will not be rectified by pollarding the tree to a height of 1 metre, as the tree will regenerate. 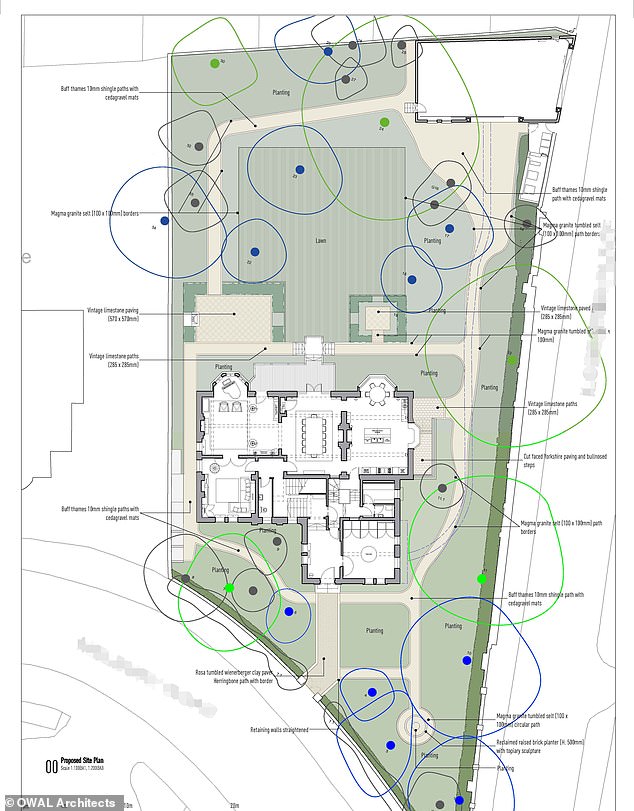 Fingers crossed! The proposed site plan from Robbie’s planning application – an inspection by Kensington and Chelsea Council is expected soon

‘Additionally, the wall could probably be re-built to allow future growth of the tree without damage reoccurring.’

The feuding rock stars have previously rowed after Williams applied to install a basement pool at his £17 million Kensington pad.

But the Led Zeppelin guitarist objected fearing it would damage delicate artwork in his Grade-I listed mansion next door.

Page, who has been inducted into the Rock and Roll Hall of Fame twice, told the council in 2018 that he would ‘fight against a new threat’ for the house he has lived in for fifty years.

The Tower House was designed between 1875 and 1881 by ‘art architect’ William Burges as his home – and the rooms have themes such as Time, Love and Literature.

To maintain the house, the rockstar has specialists install scaffolding and sugar-soap the walls and only plays acoustic guitar to prevent damage.

Williams was finally given permission for his basement in 2019 after an almost five-year battle and work was due to start this year.

His construction company sent a letter to local residents in April telling them construction work was due to begin and would last 11 months, but it is not known whether work has started.

Williams has had to use hand tools while building it to minimise vibrations – massively increasing the price of building work.

Works on Williams’ house is expected to take 46 weeks – including site set up and enabling works, piling and underpinning, top down slab construction, excavation and propping, concrete box and waterproofing.

Williams has lived in his 47-room house after buying it from the family of late director and restaurant critic Michael Winner in 2013.

In this time it has been subject to 46 planning decisions as he fights to renovate it.

The rocker defied Williams in 2016 by having work done on his roof – by a company called Millennium, the name of one of the singer’s greatest hits.

In 2017 the Take That star submitted plans for a giant shed on stilts in his garden so his kids could have somewhere to play.

This sparked fury with residents who complained it would block light to their gardens and spoil the surroundings.

Williams later sparked more fury and had to apologise after saying the guitarist had a mental illness and had been sitting for hours in his car outside his house.

He told Italian Radio DeeJay: ‘Jimmy has been sitting in his car outside our house four hours at a time.

‘He’s recording the workmen to see if they’re making too much noise. The builders came in and he was asleep in his garden waiting. It’s like a mental illness.’