Rita Ora was in good company as she unwound in Madrid on Tuesday, shortly after flying to the Spanish capital to perform on behalf of extravagant jewellery brand Cartier.

The British singer, 31, was accompanied by ever-present boyfriend Taika Waititi and American model Maya Henry, who appears to have bounced back following her abrupt separation from One Direction star Liam Payne.

Rita’s close friend Vas J Morgan also made an appearance as the group made the most of soaring Mediterranean temperatures the morning after her latest live performance.

Don’t mind me: Rita Ora caught the eye in a blue and white string bikini as she relaxed in Madrid on Tuesday morning 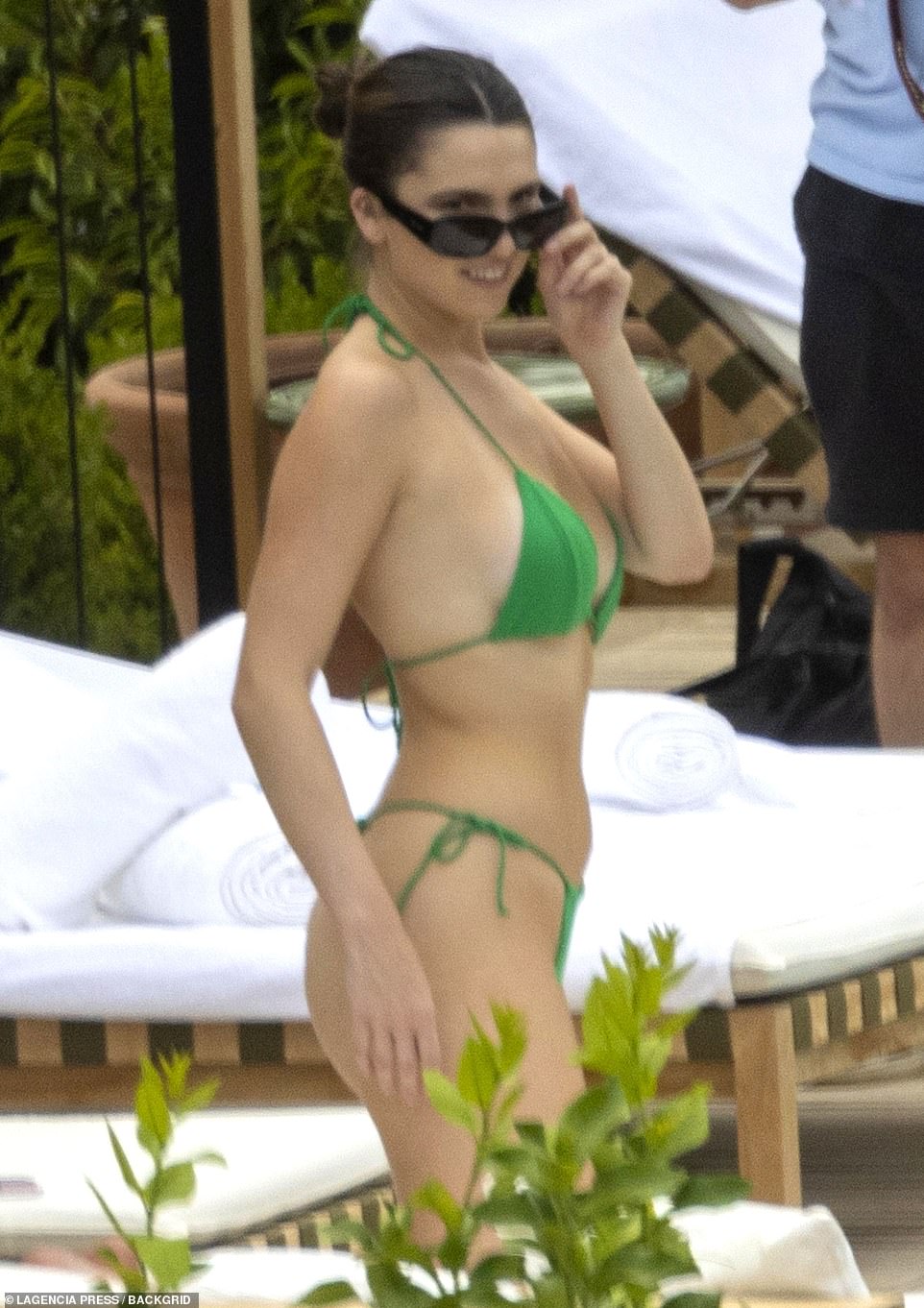 In good company: The British singer was joined by American model Maya Henry as she relaxed by the hotel pool

The singer looked toned and trim as she reclined on a sun-lounger close to their outdoor pool during a short stay in Madrid, ostensibly to make a series of public appearances.

Joining Rita, Texan model Maya, 21, was an equally engaging sight courtesy of her green string bikini while settling down for a day of rest and relaxation in the Spanish city.

Evidently in high spirits, she greeted onlookers with a coy smile as she reclined alongside Rita, her eyes shielded behind a pair of heavily tinted sunglasses. 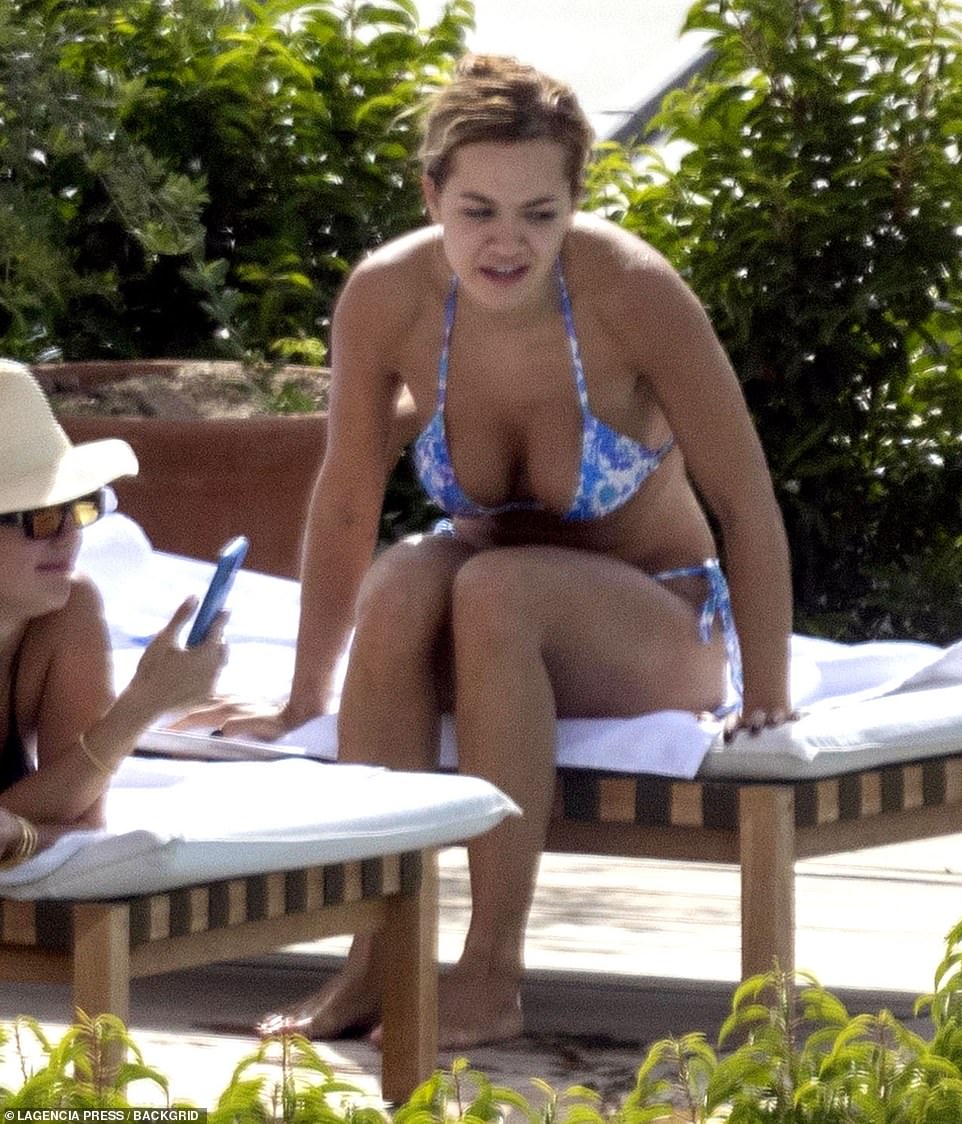 The good life: Rita settled down on a sun-lounger as she made the most of her free time in Madrid following a performance at a recent Cartier show in the city

That’ll do: Rita was seen drinking a cup of morning tea as she relaxed by the pool with friends, among them Vas J Morgan and boyfriend Taika Waititi 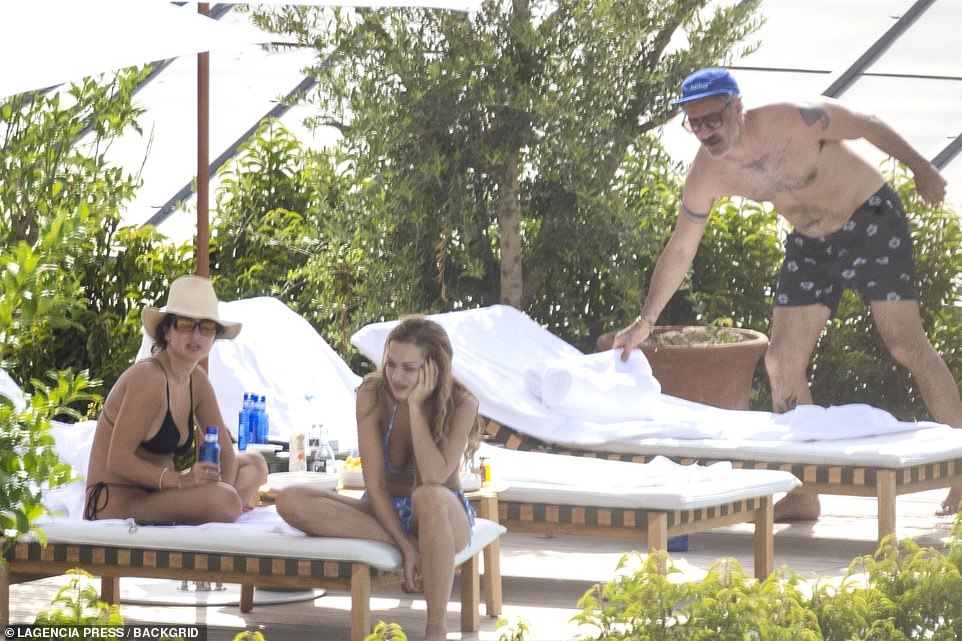 There he is: Taika sported a pair of patterned blue Bermuda shorts and cap for his latest outing with the singer

New Zealand born director Taika occupied a sun-lounger alongside his girlfriend, and the tattooed filmmaker caught the eye in a blue cap and patterned Bermuda shorts while enjoying the sunshine.

Despite rising temperatures, Rita opted for a quintessentially British cup of tea provided by staff as she kickstarted her day in the grounds of their lavish five-star hotel.

Close friend Maya, understood to be single following her split from Liam, later covered up by pulling on a white towelling robe before making her inside. 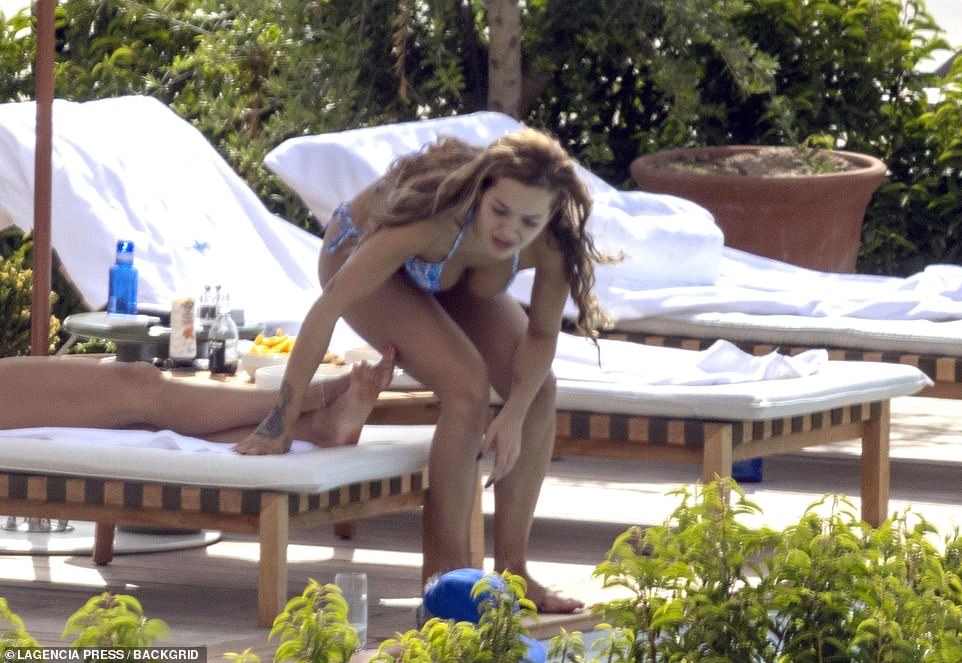 Taking it easy: Rita chatted to boyfriend Taika, who stayed cool beneath his cap on another scorching day in Madrid 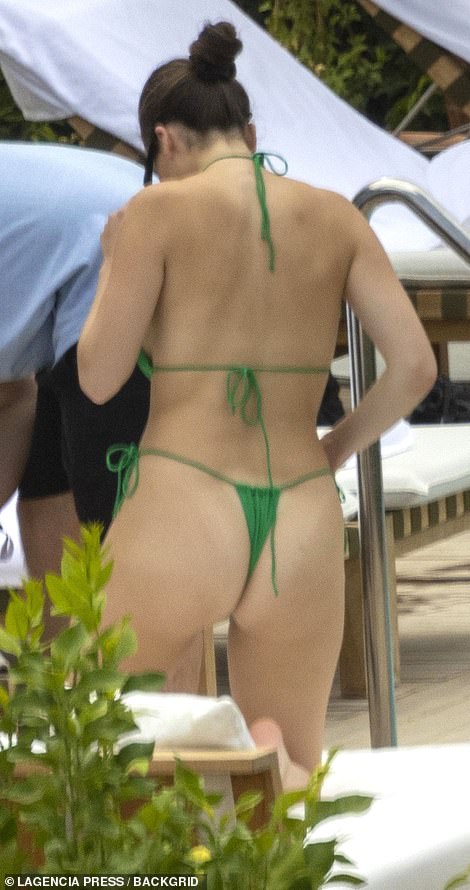 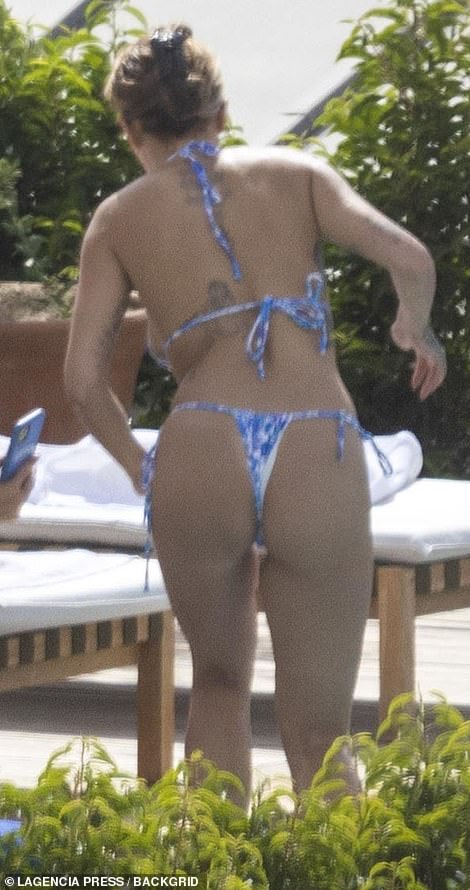 Rear we go: Maya (L) and Rita (R) caught the eye in their distinctive swimwear while topping up their tans on Tuesday 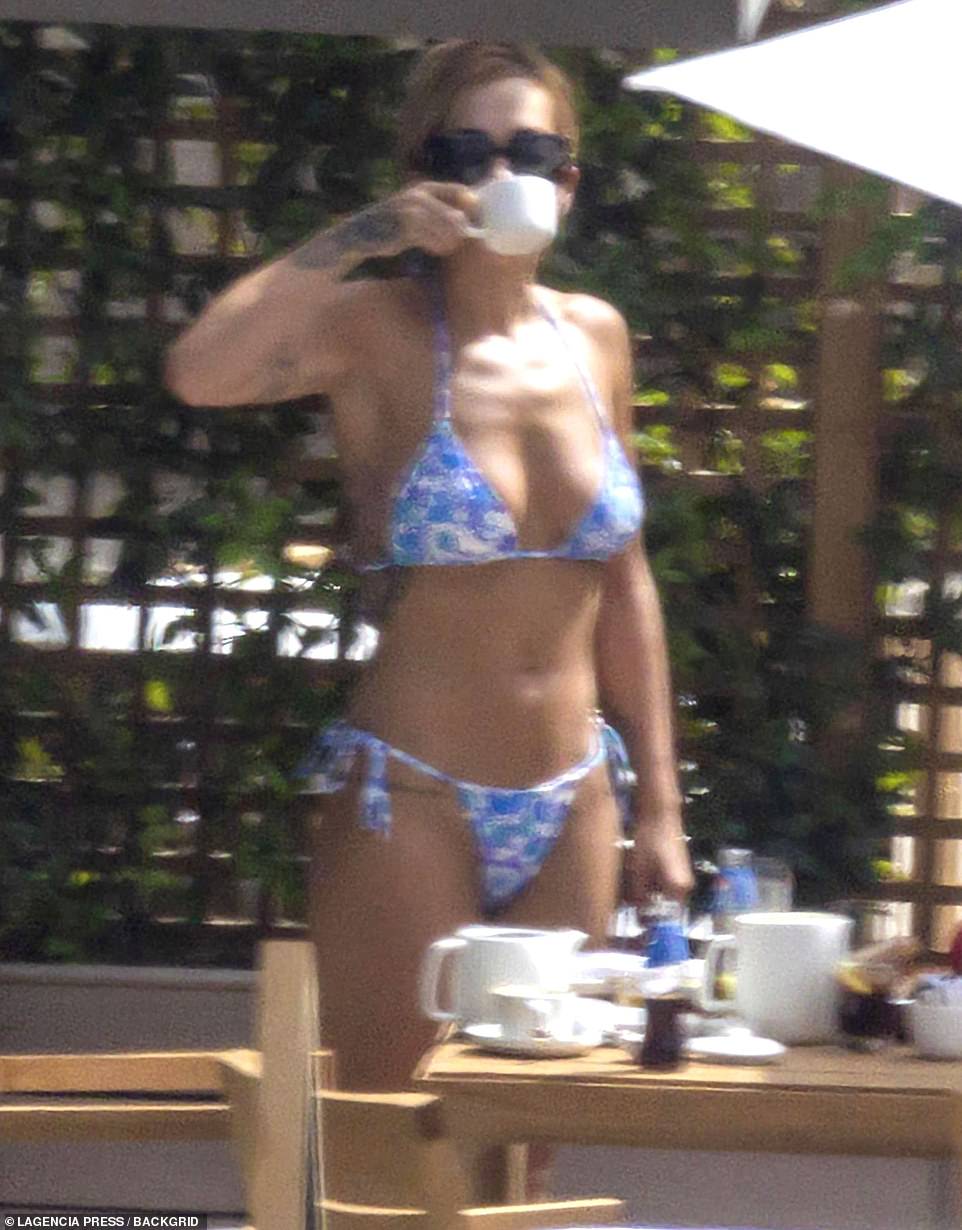 Down the hatch: Rita kickstarted her day with a cuppa after hotel staff brought out a pot of tea and various other refreshments 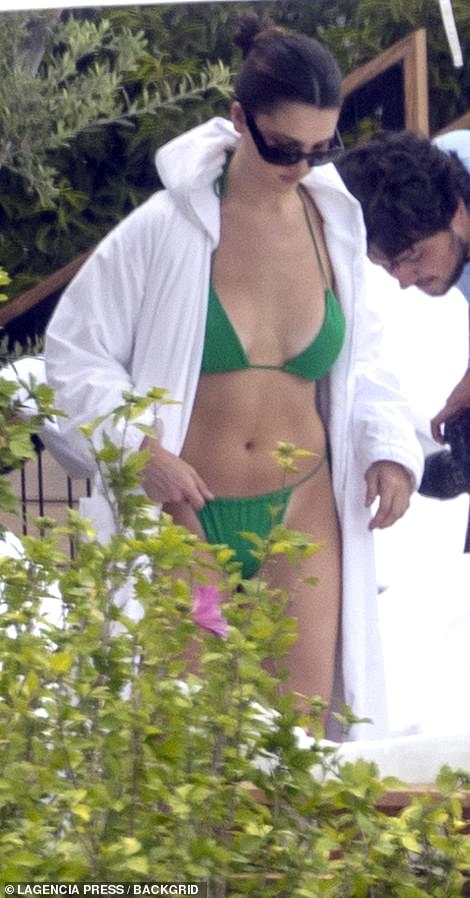 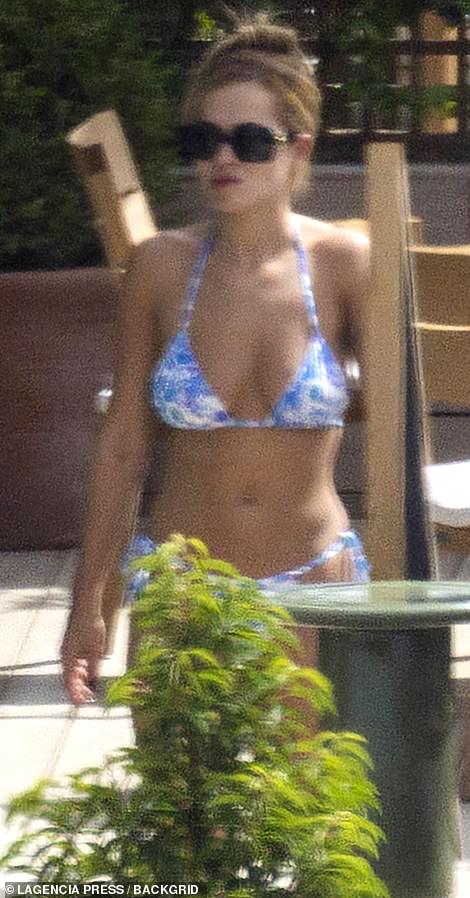 That’s better: Maya pulled on a white robe as she relaxed by the pool with Rita, who showed off her incredible figure 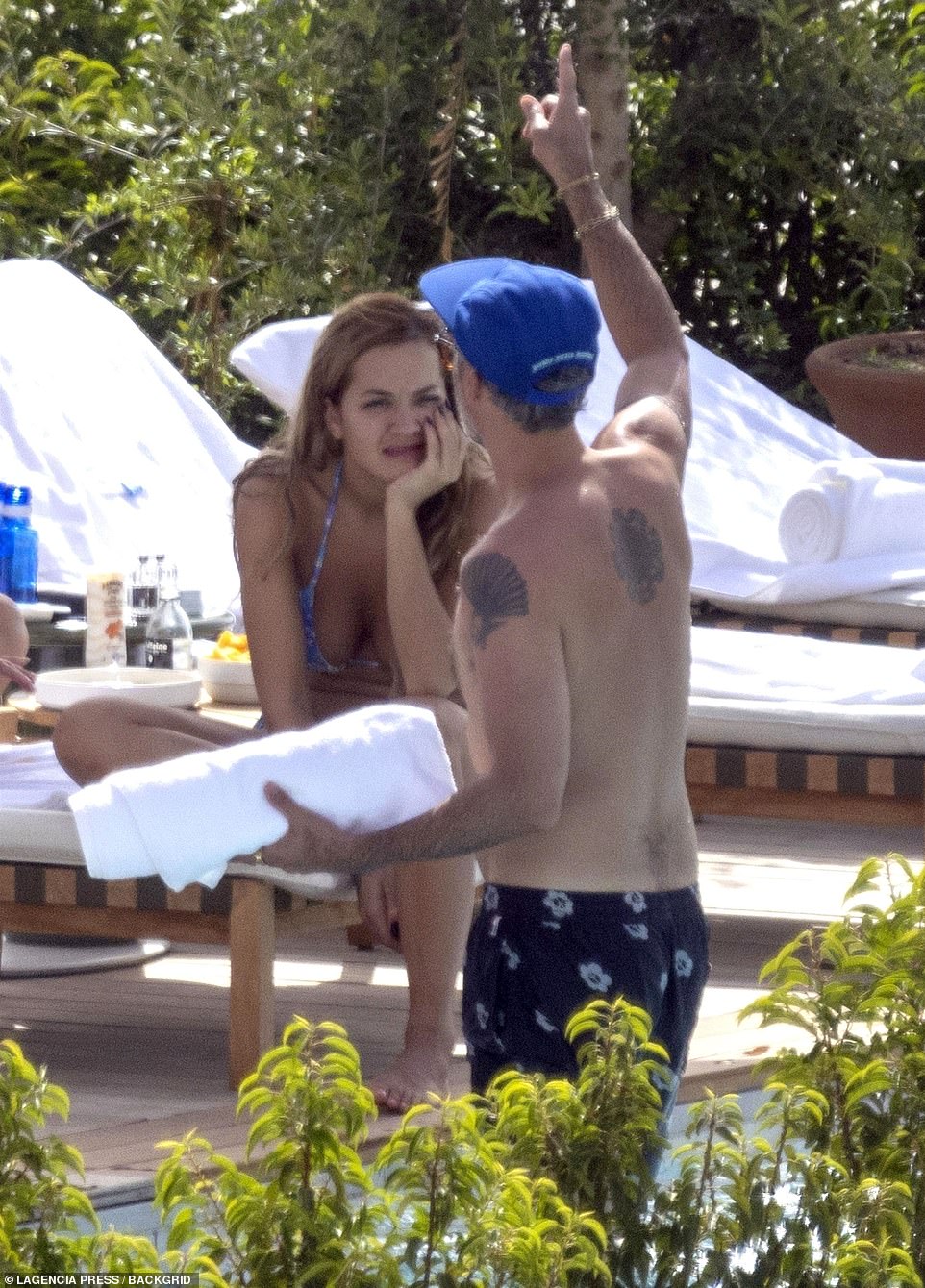 Upbeat: Shirtless Taika appeared to be in typically high spirits during his latest appearance with Rita

Reports emerged earlier last week that the British songstress and Taika were engaged and planning an imminent, low-key ceremony abroad before celebrating with their fellow A-listers in a big London bash later this year.

It is understood that Rita, who is working on several films and The Voice Australia, and Taika, who is planning a string of movies, hope to tie the knot once their work commitments have wrapped up.

A friend told The Sun: ‘This isn’t about them doing a big showy thing and crowing about it beforehand. It’s just about them being in love and deciding the time is right to formalise their relationship. They couldn’t be happier. 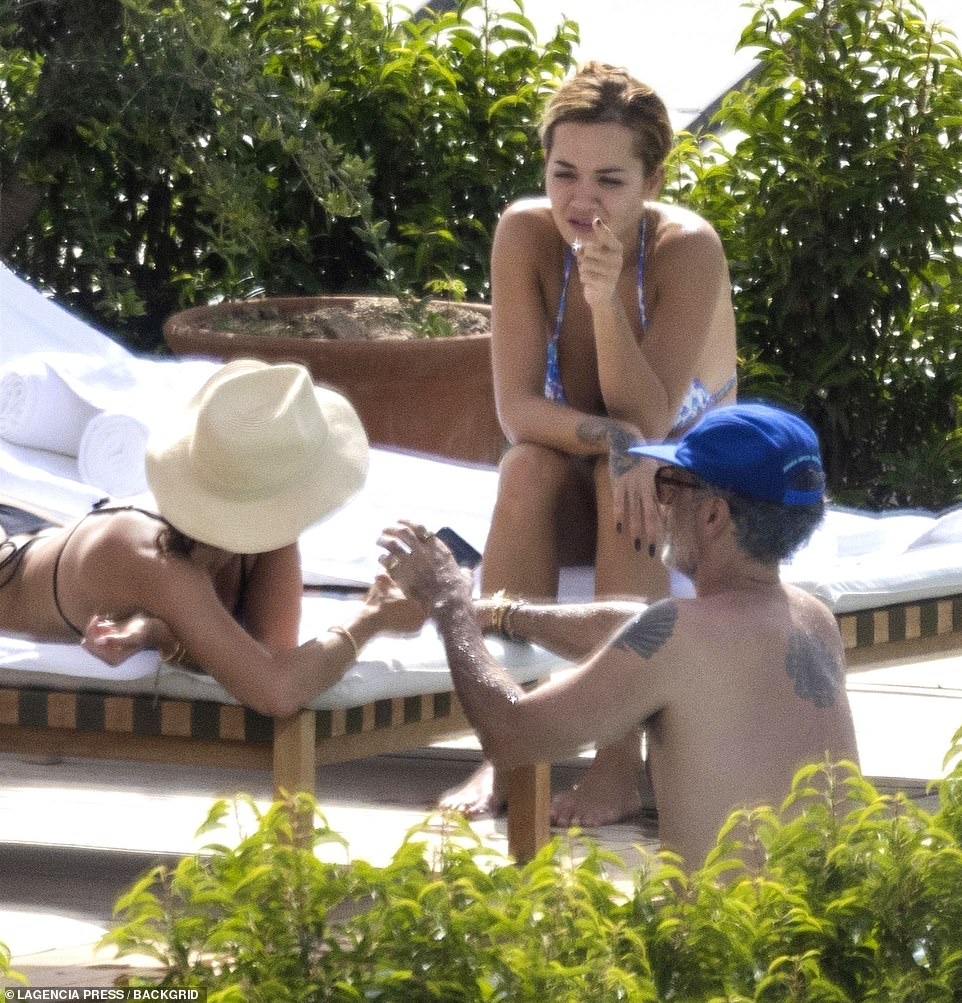 Pals: The group chatted among themselves while topping up their respective tans during a welcome day off 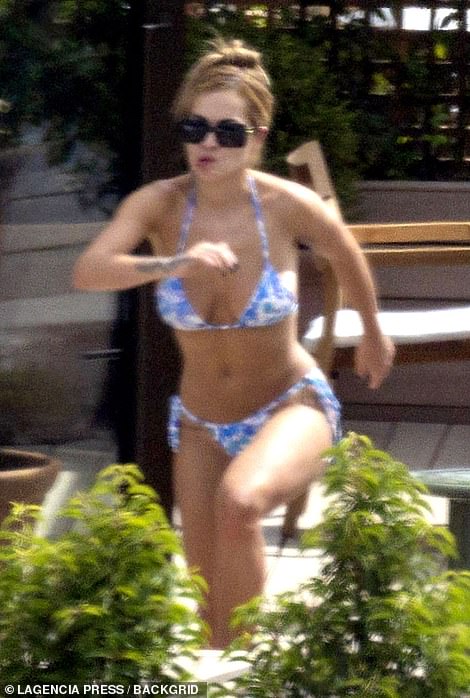 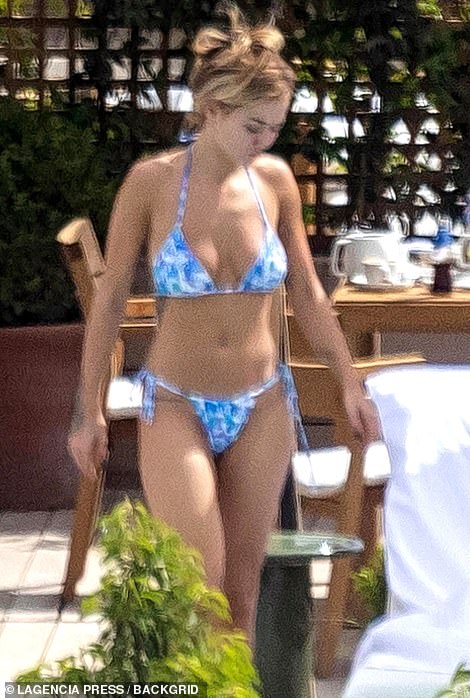 Hard to miss: Rita’s patterned bikini ensured she caught the eye during a short break in the Spanish capital 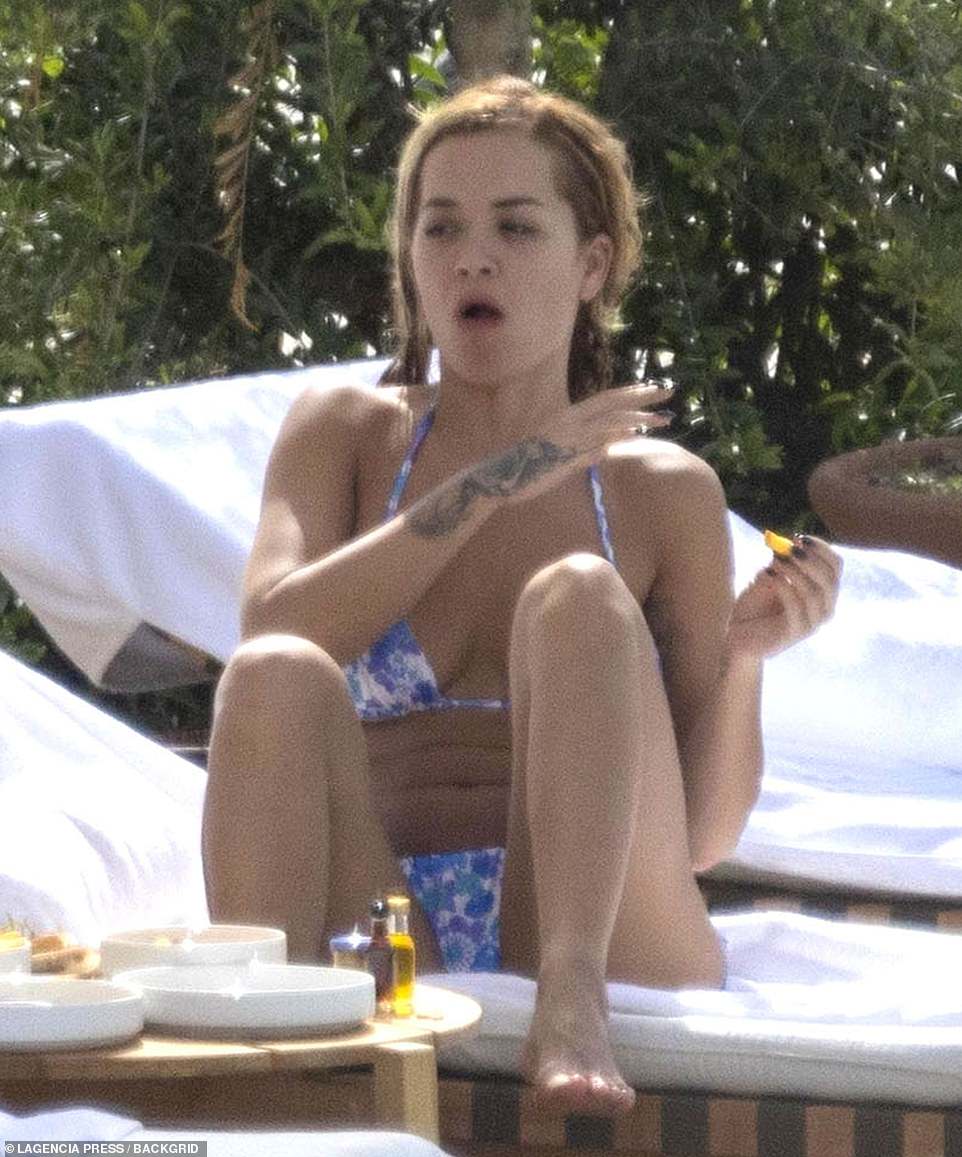 Fresh faced: The singer appeared to be make-up free as she took to easy with friends outside her hotel on Tuesday 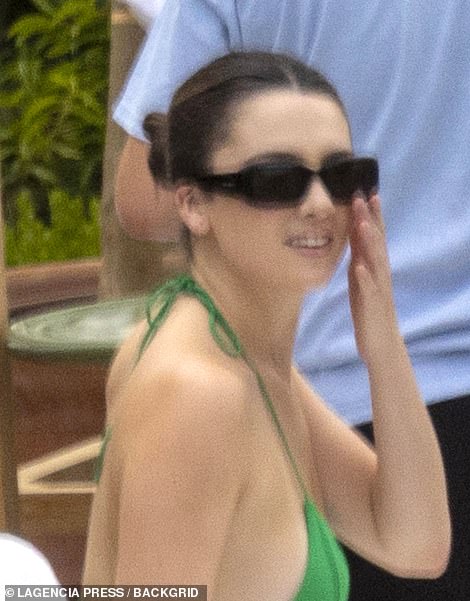 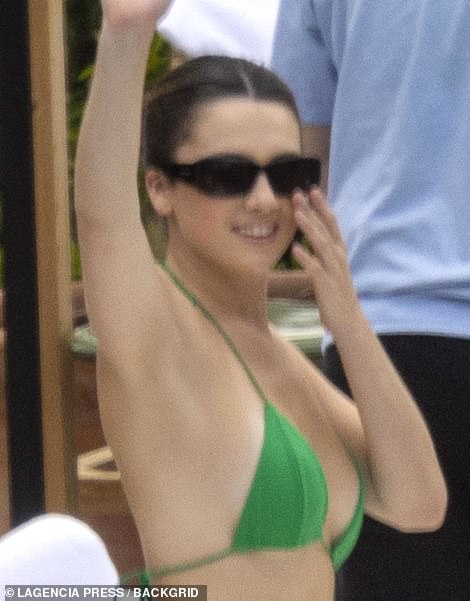 Shady: Maya concealed her eyes behind a pair of heavily tinted sunglasses  as she acknowledged onlookers 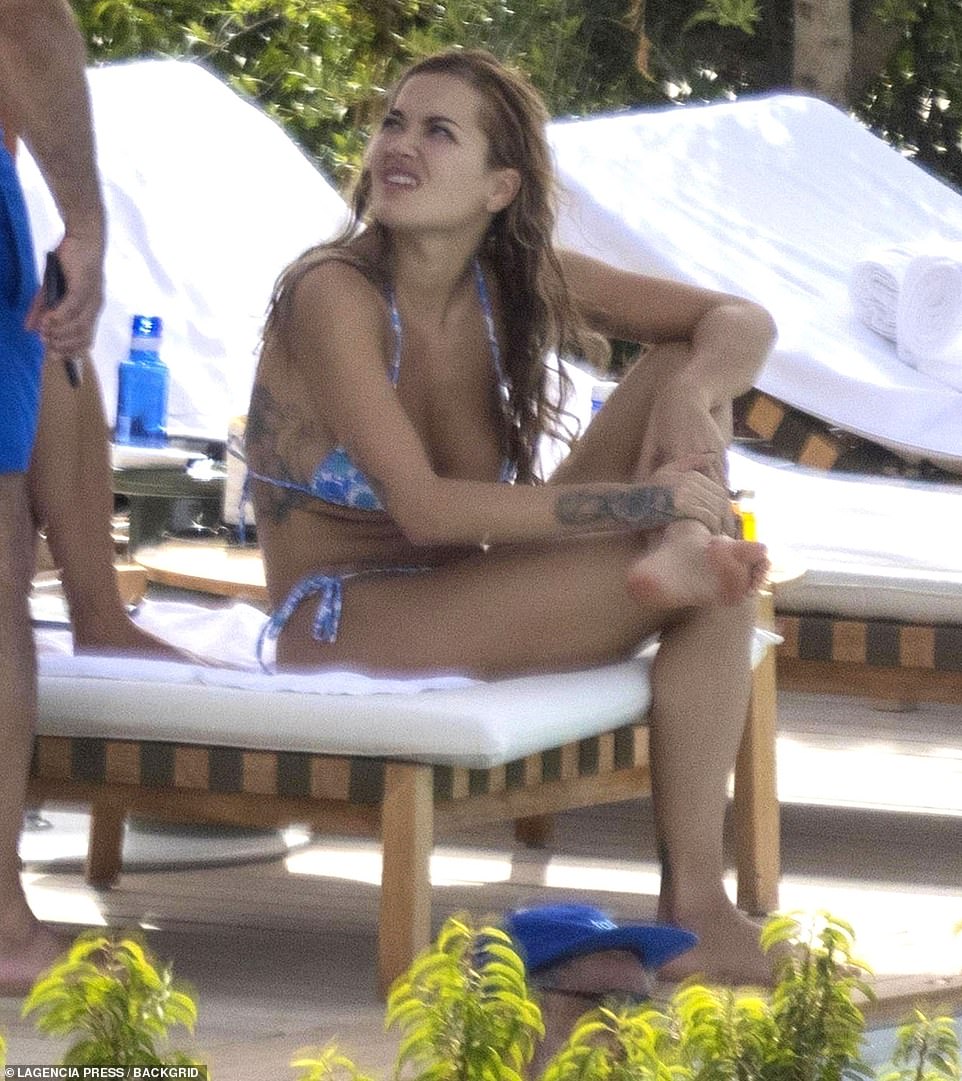 Well inked: Rita’s numerous tattoos were on full display as she idled in the shade on Tuesday morning

‘They didn’t do a whole, “Will you marry me?” thing and an Instagram post. There’s no ring or big build-up. They just got closer and closer and eventually said to each other almost simultaneously, “I want to marry you.”

The pal added that there are ‘a few details to iron out’ but the nuptials are ‘coming soon’.

The couple began dating in March 2021 and just five months later in August, the pair were reportedly already discussing marriage.

Taika was previously married to film producer Chelsea Winstanley, but the pair are believed to have quietly split in 2018. 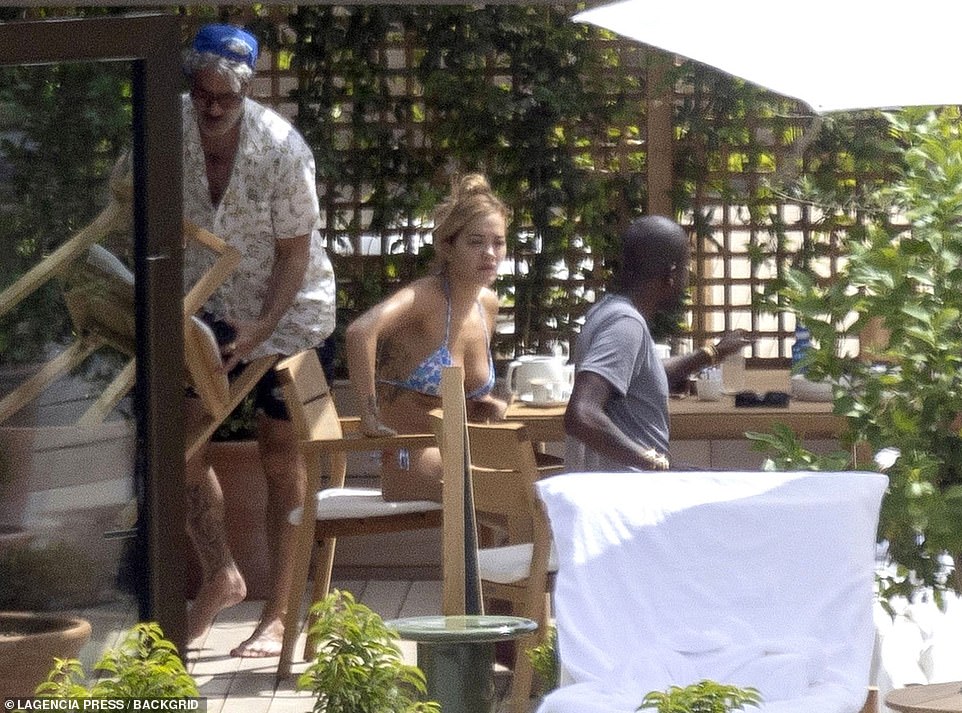 Pals: Rita’s close friend Vas J Morgan also joined the party as they sat at an outdoor table outside the hotel 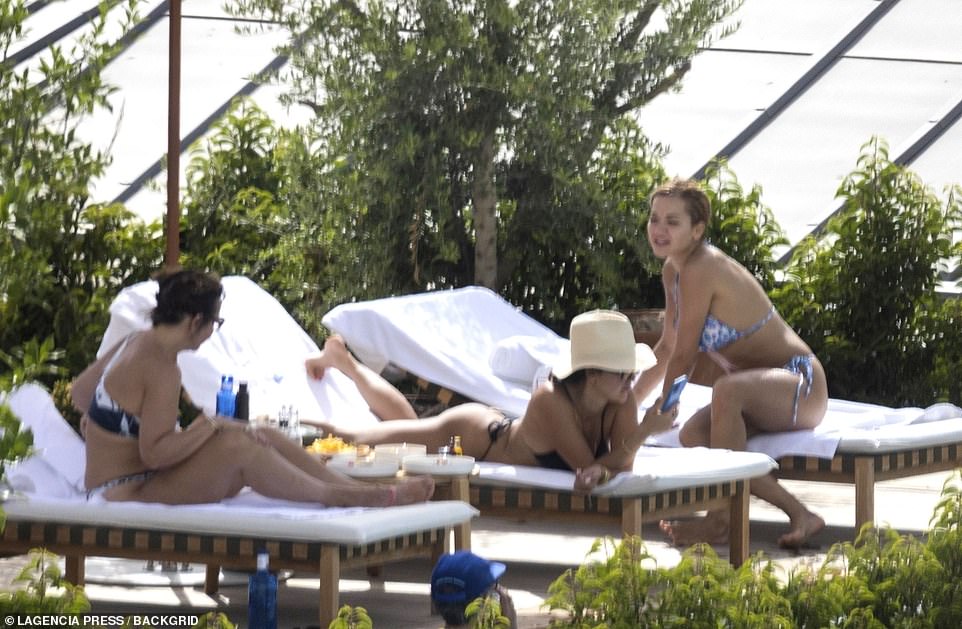 And relax: The singer is making the most of her time off before returning to work on her various TV and music commitments 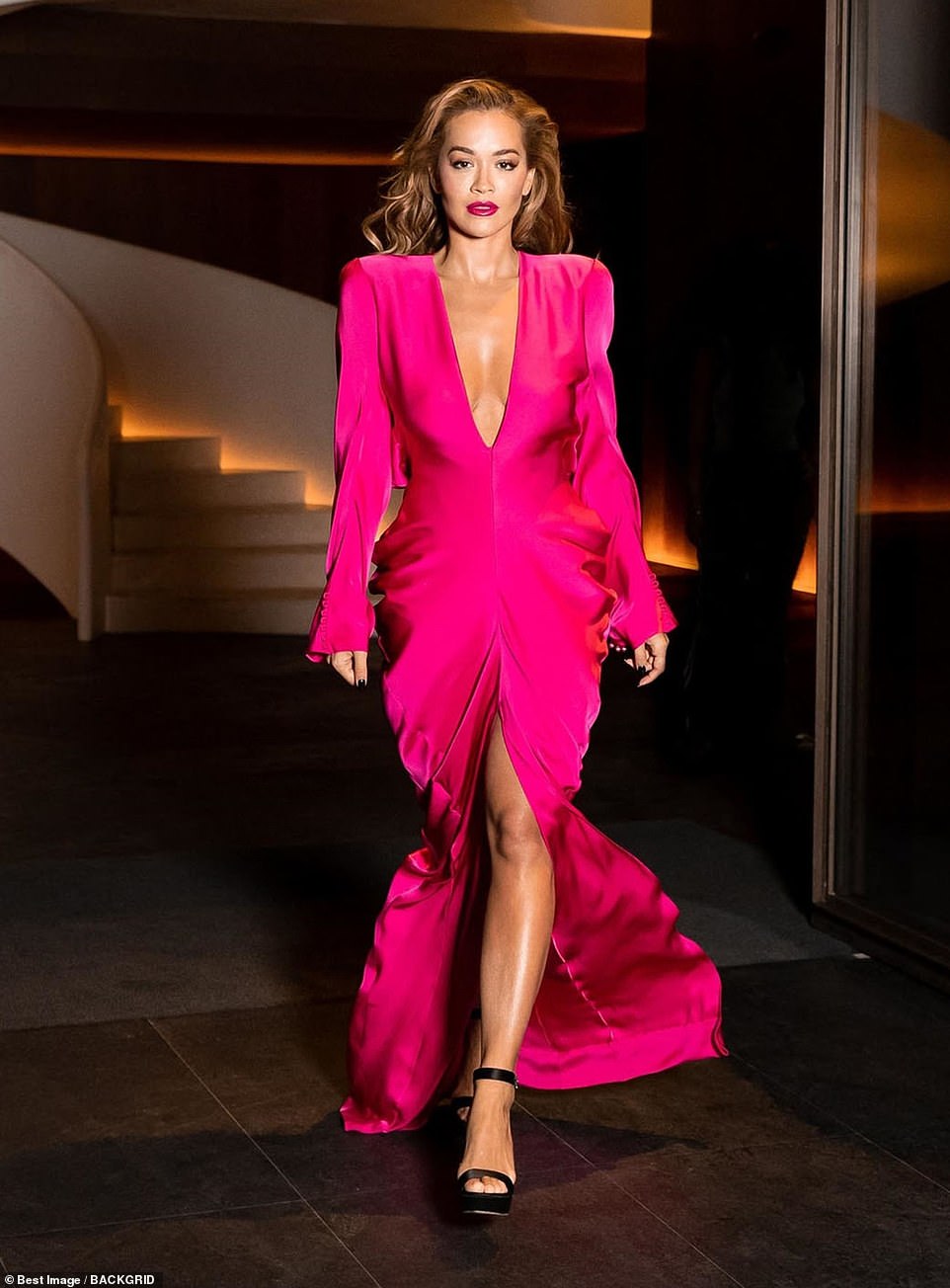 Bold look: Rita opted for a bright pink gown as she performed for Cartier in Madrid on Monday evening

Glamorous: A thigh high split along the hem put her toned pins on display, which she elevated with a pair of black platform heels 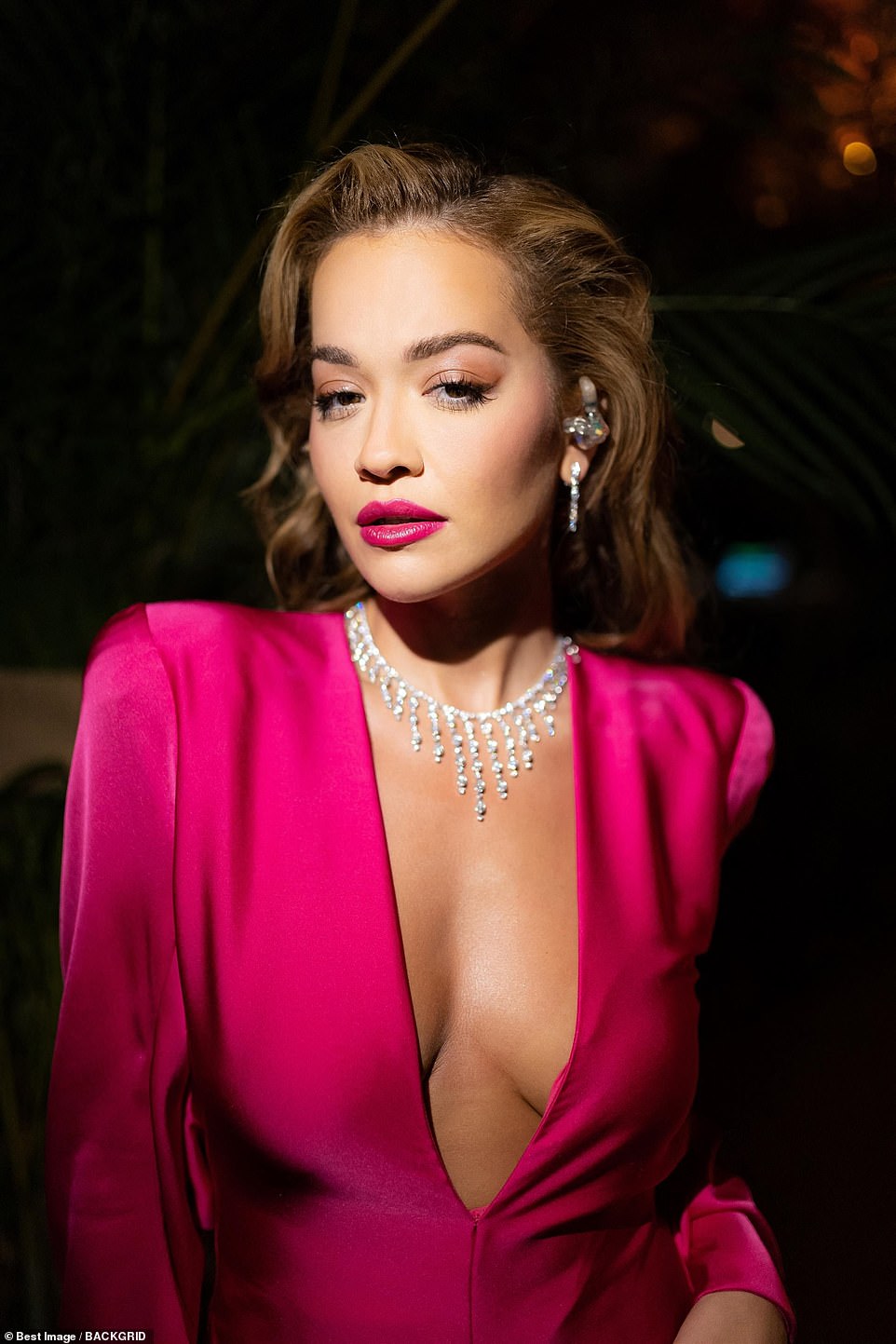 Stunning: A plunging neckline put her ample cleavage on display and it cinched in at her waist to accentuate her hourglass curves