Rebekah Vardy posed up a storm for a stunning new photoshoot after revealing she needed therapy to cope with online abuse as her bitter Wagatha Christie libel battle with Coleen Rooney continues.

The WAG, 39, who said the intense backlash she received online was like something she’d ‘never experienced before’, looked sensational as she modelled chic outfits amid her WAG war.

Ensuring all eyes were on her, the Dancing On Ice star highlighted her toned figure in a sparkly crop top and matching jeans, before switching into a low-cut, denim jumpsuit. 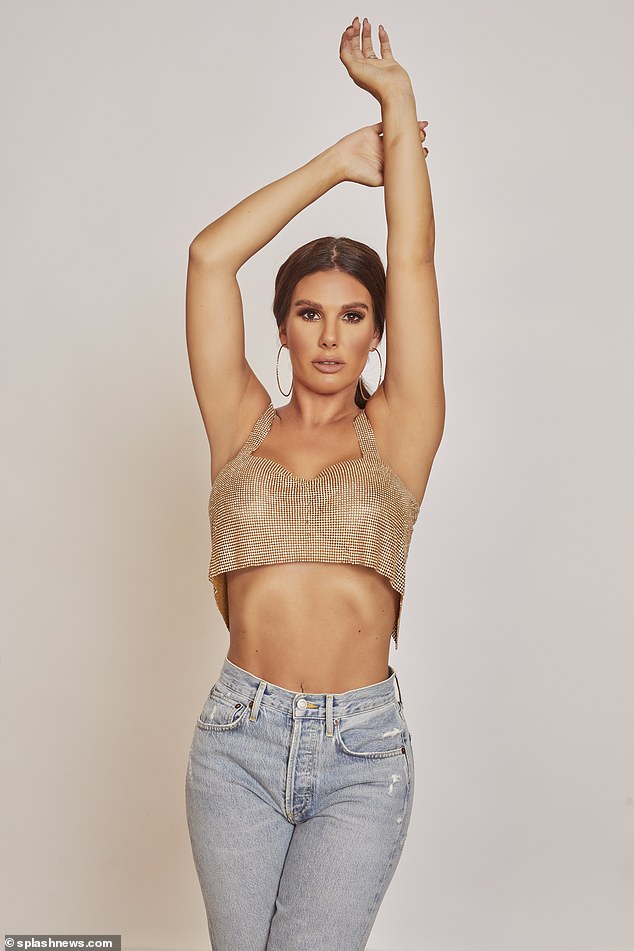 Brushing things aside: Rebekah Vardy posed up a storm for a stunning new photoshoot after revealing she needed therapy to cope with online abuse amid her Wagatha Christie battle

The brunette’s third ensemble saw her dazzle in a slinky bodysuit, which accentuated her lean legs.

Becky framed her face with poker straight tresses and edgy make-up, while amping up the glamour with hooped earrings and a chunky gold necklace.

Earlier this week, the mother-of-five slammed the ‘Be Kind’ trend on social media as she has found the people who profess it often do the opposite, and said she has learned not to ‘argue with idiots’. 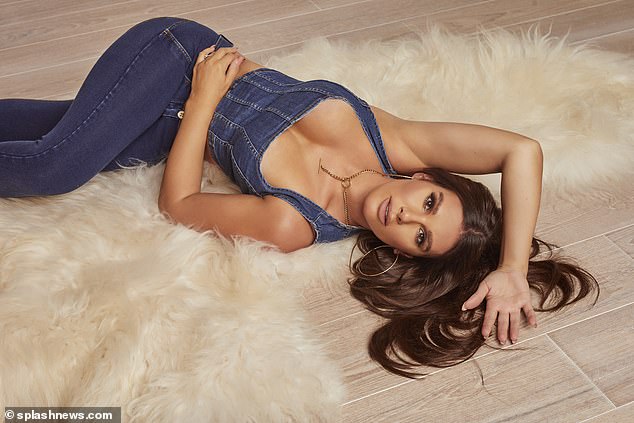 Working it: The WAG, 39, who said the intense backlash she received online was like something she’d ‘never experienced before’, looked sensational as she modelled chic outfits 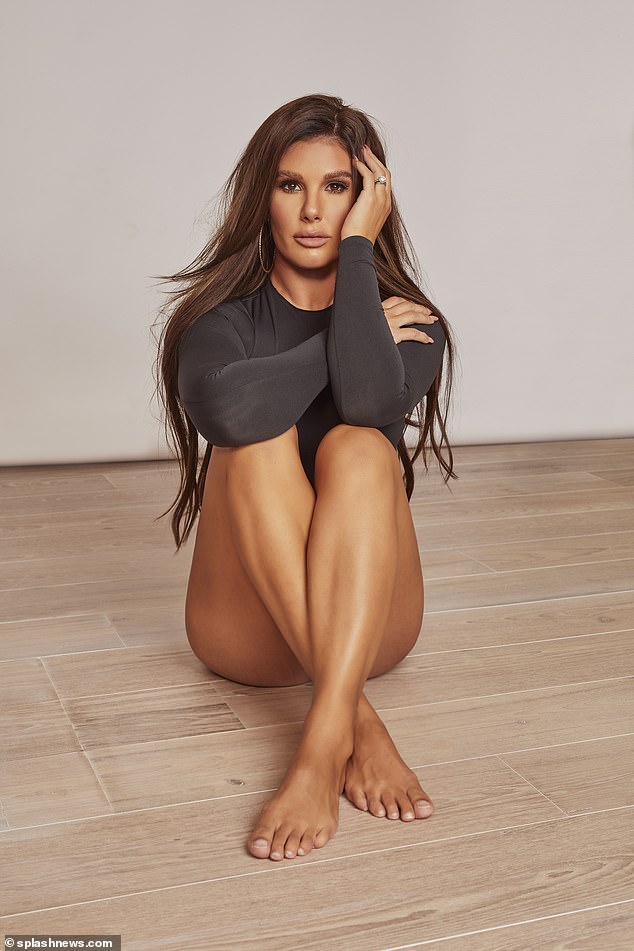 Wow-factor! The brunette’s third ensemble saw her dazzle in a slinky bodysuit, which accentuated her lean legs 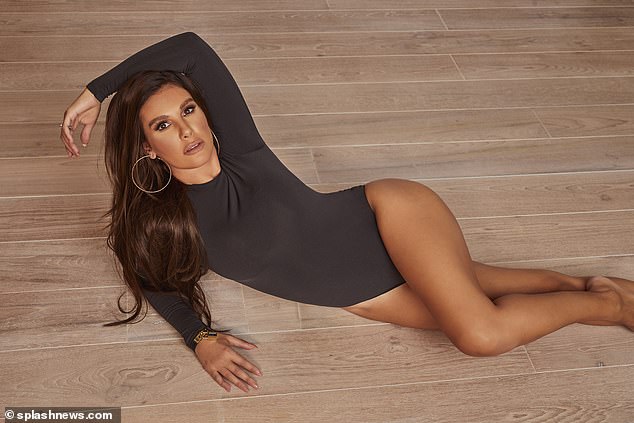 Radiant: The mother-of-five framed her face with poker straight tresses and edgy make-up, while amping up the glamour with hooped earrings and a chunky gold necklace

Rebekah launched her high-stakes High Court libel action after Coleen, 34, accused her in an October 2019 Instagram post of being the source of leaks to the media on stories about her.

The I’m A Celebrity… Get Me Out Of Here! star was heavily pregnant with her fifth child, Olivia, now 15 months, when the Wagatha Christie story broke, prompting a slew of online abuse.

Court documents reveal the abuse made her feel suicidal, prompting three trips to hospital due to her anxiety, and sparking concerns about either going into early labour or losing her baby due to the stress.

In an interview with The Sun on Sunday, Rebekah said that she was forced to seek out therapy as she dealt with death threats following Coleen’s accusation. 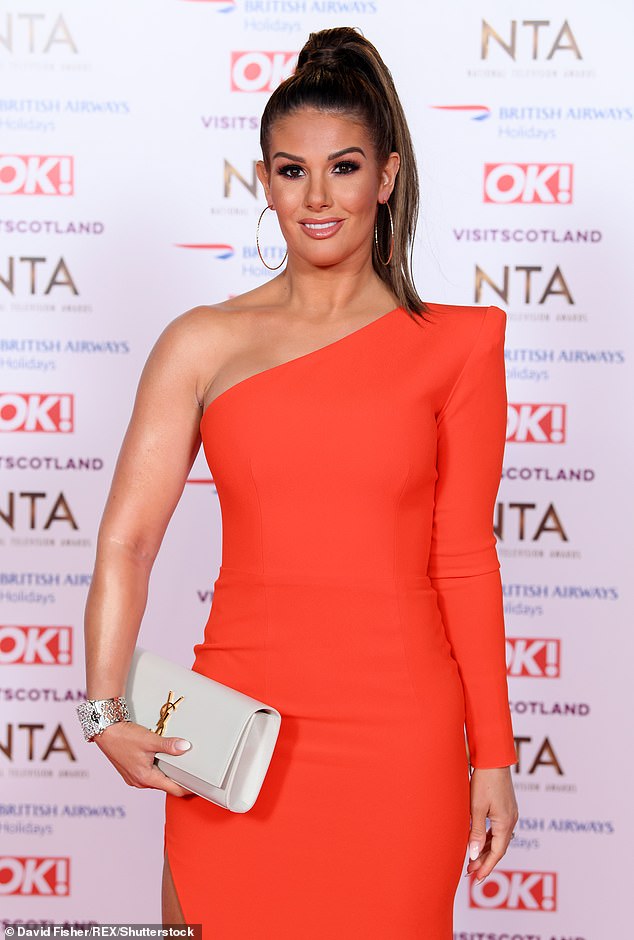 ‘People are such idiots sometimes’: Earlier this week, Becky slammed the ‘Be Kind’ trend as she has found the people who profess it often do the opposite (pictured in 2019)

She said: ‘I have had therapy in the last couple of years… because it was something like I had never experienced before.’

Rebekah, who is married to Leicester City striker Jamie Vardy, 39, called out people on social media who write ‘Be Kind’ in their profile and still write nasty comments online.

‘The whole ‘be kind’ thing is just a trend because they still slag people off as much as they want,’ she said. ‘People are such delusional idiots sometimes.’

She continued: ‘It’s very frustrating, but I’ve learned you don’t argue with idiots.’ 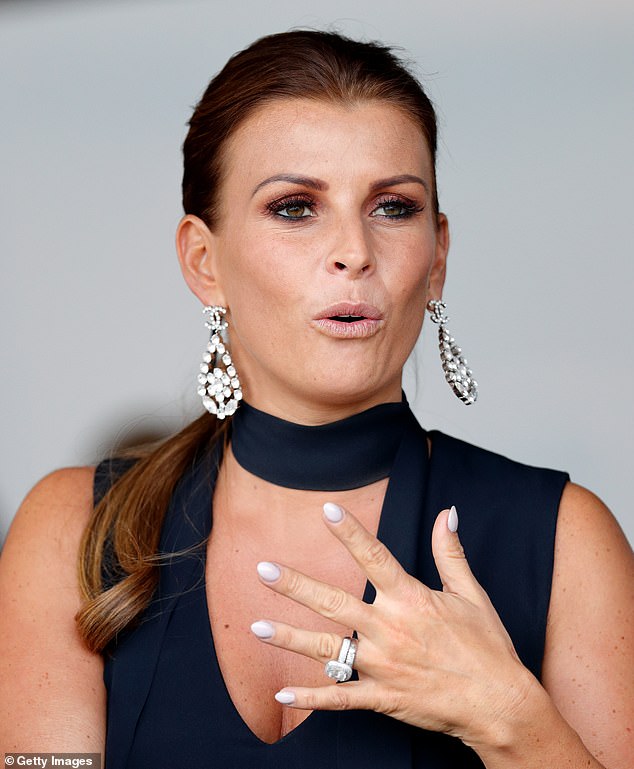 Court battle: The media personality recently shared a not-so-subtle post about karma after her legal battle with Coleen Rooney (pictured in 2018) returned to High Court

Earlier this week, Rebekah shared a not-so-subtle post about karma after her legal battle with Coleen returned to High Court.

She took to Instagram on Tuesday to post a quote, which read: ‘They say people in glass houses shouldn’t throw stones… but when Karma is ready she will throw a bowling ball at your head.’

The reality star placed the 100 emoji alongside the powerful quote, which seemed to be a thinly-veiled dig at Coleen, who is married to football icon Wayne Rooney.

MailOnline contacted representatives for Rebekah and Coleen for further comment at the time. 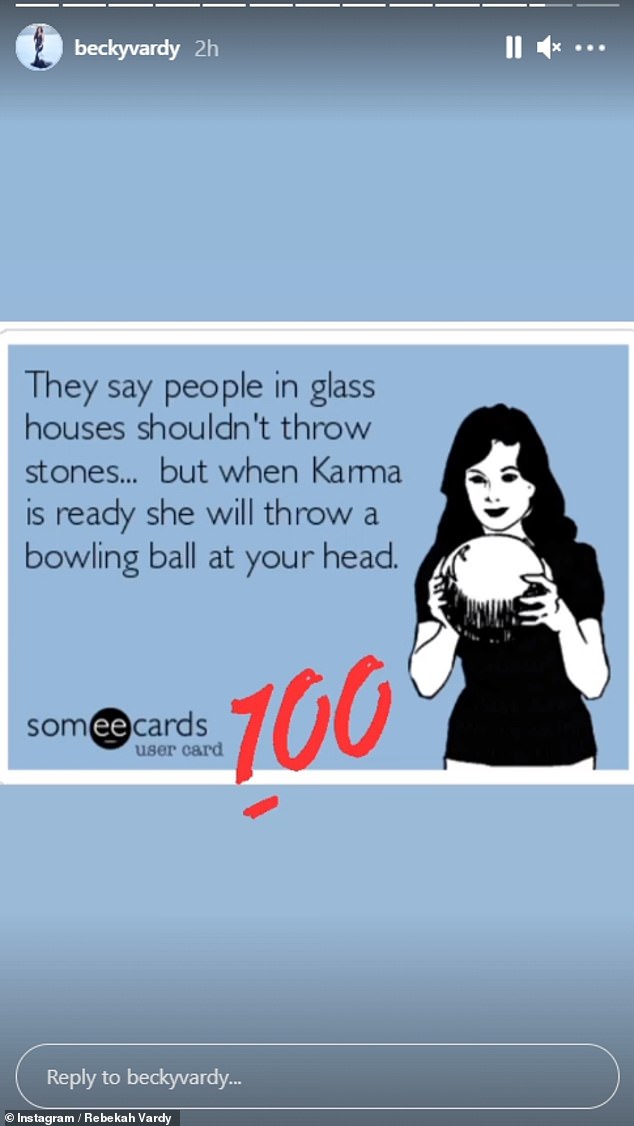 Cryptic: The wife of Leicester City striker Jamie Vardy took to Instagram on Tuesday to post a quote which seemed to be a thinly-veiled dig at Coleen, 34

The court heard how peace talks between the warring women had broken down during mediation and the case was expected to go to a full trial, costing the loser an estimated £1.5million.

A preliminary hearing heard that both women should try and settle ‘if they can’ as costs in legal fees continue to spiral.

Coleen’s barrister John Samson asked the court to ‘reject the claimant’s cost budget and ask them to review it because, in the words of my lay client, it is grotesque’.

John told Judge Roger Eastman that the sums involved were ‘huge’, telling the court that ‘the claimant’s budget to date, including incurred costs, is double that of the defendant’. 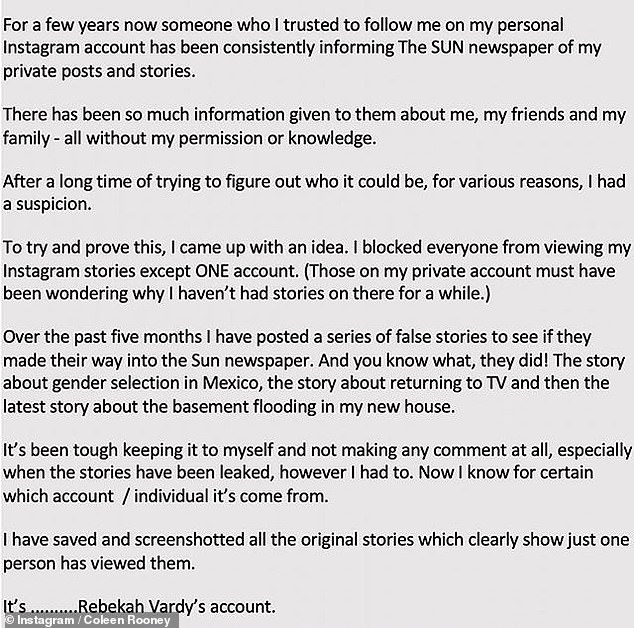 Details: She launched her high-stakes High Court libel action after Coleen accused her in an October 2019 Instagram post of being the source of leaks on stories about her

Rebekah’s barrister Sara Mansoori said her client’s £897,000 budget ‘reflects the complexity, scope and scale of the legal and factual issues’.

She added: ‘Mrs Vardy’s cost budget reflects the very serious nature of the highly damaging defamatory allegation made against her – which continues to be published by Mrs Rooney.

‘It has caused enormous distress to Mrs Vardy and led to her being targeted by hostile and abusive online messages, as well as causing extreme upset and anxiety to members of her family.

‘It was necessary to take steps to seek to understand the allegations made by Mrs Rooney, which involved technical expertise, as well as to seek to resolve the dispute.

‘Regrettably this was not possible and further costs have been incurred in pursuing the claim to this stage.’ He also gave the parties until June to file revised cost budgets. 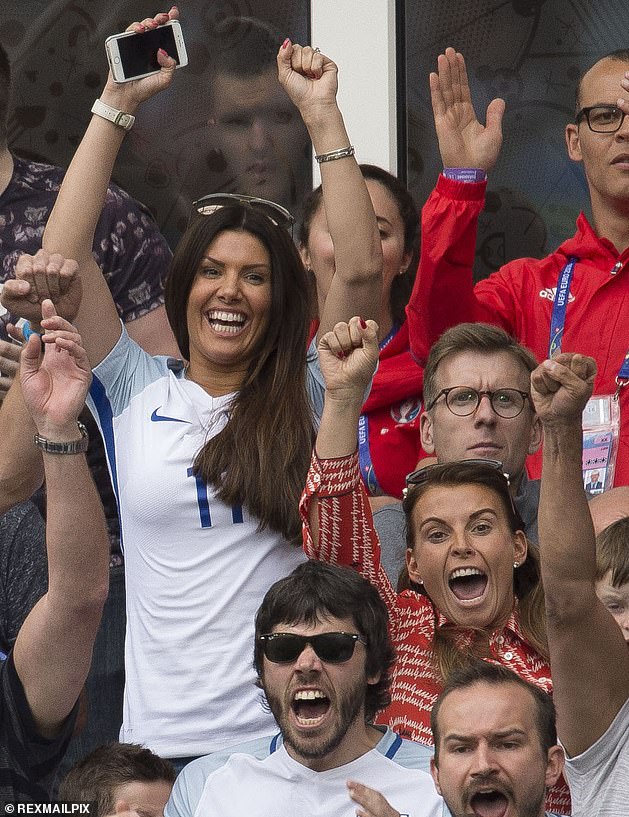 Rebekah sued her WAG rival last June, insisting she ‘suffered extreme distress, hurt, anxiety and embarrassment as a result of the publication of the post and the events which followed’.

In her written case, Rebekah’s lawyers said the abuse she received made her ‘feel suicidal’, adding: ‘She suffered from severe panic attacks and anxiety which manifested in being scared to leave her house.’

She claimed her husband Jamie was targeted during football matches, with opposition fans chanting ‘your wife is a grass’ for up to five minutes at a time.

But Coleen’s lawyers said the post was ‘entirely legitimate and justified’ and referred to Rebekah’s ‘exceptionally close relationship’ with The Sun and some of its journalists.

An attempt at mediation, to try to resolve the case without a trial, took place earlier this year.

MailOnline revealed Coleen’s 11th-hour peace offer to Rebekah, suggesting if she accepted her account was the source of leaked stories to the press, then Coleen would accept her assurances that she personally knew nothing about the leaks.

The figures put into court by lawyers acting for the warring parties underline the high stakes in the battle of the wags – as well as highlighting the eye-watering fees charged by defamation lawyers.

For help call Samaritans for free on 116 123 or visit www.samaritans.org

October 9, 2019: Coleen Rooney accuses Rebekah Vardy of ‘leaking stories about her’ to The Sun.

Coleen famously wrote: ‘I have saved and screenshotted all the original stories which clearly show just one person has viewed them. It’s ……………. Rebekah Vardy’s account.’

October 9, 2019: Rebekah takes to her social media to deny being the leaker as Coleen’s post goes viral, while a Sun spokesman refuses to comment on the source of their stories.

February 13, 2020: Rebekah breaks down on ITV’s Loose Women, saying the spat was ‘one of the worst things I had to deal with apart from being abused when I was younger’.

November 20, 2020 Rebekah wins the first round of her High Court libel battle.

January 18, 2021: Reporters emerge that the pair will be holding a mediation session over Zoom.

February 4: The pair attend the mediation session, in their first meeting for years.

March 16: Mediation fails, meaning the case will go to a full trial some time before next April.