They’re one of the world’s biggest girl bands.

And Little Mix were sure to impress on Friday as they showed off their musical talent during a special Meerkat Music performance streamed on YouTube.

Singer Perrie Edwards, 27, lead the glamour as she put on a very stylish display in a leopard print bodysuit and crop top during the event. 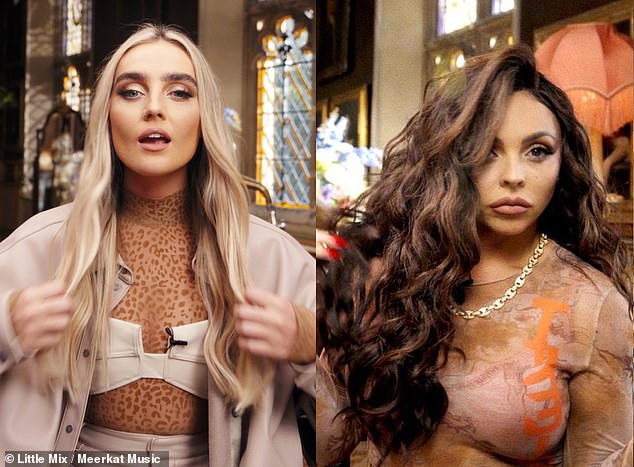 Perrie wore her long blonde locks down and let them cascade over her shoulders as she performed the band’s dance routines.

She looked every inch the fashion icon in an oversized jacket and wide-leg beige trousers which cinched at the waist to accentuate her slim frame.

The brunette beauty wore her tresses curly and accessorised her ensemble with a chunky gold necklace. 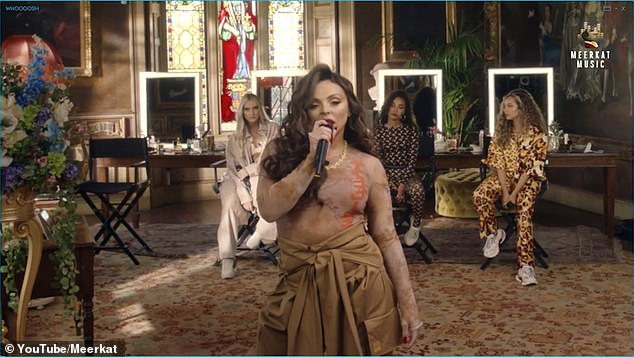 Work it! Jesy flaunted her sensational figure in a skin-tight top and accessorised with a gold necklace

While Jade Thirwall, 27, opted for an oversized animal print suit, with the star leaving the shirt open to give a glimpse of her toned abs.

Leigh-Anne Pinnock, 28, also wowed in tight printed bodysuit, which was very similar to the one worn by Beyonce in Black Is King and later also by Adele.

Little Mix filmed their show from the same location that they made the video to hit song Woman Like Me.

During the concert they were asked what they had been missing during lockdown, with the girls sweetly agreeing it was each other. 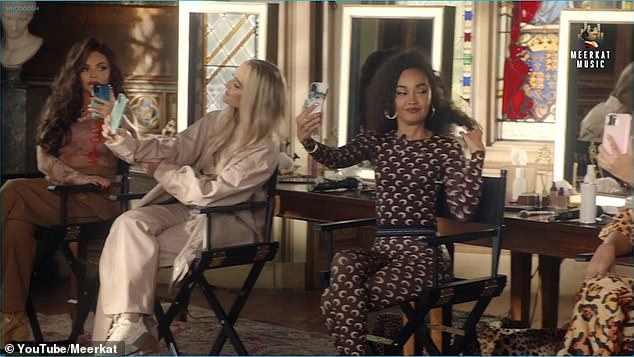 Beauties: The girls were seen relaxing in chairs before jumping up and showing off their moves 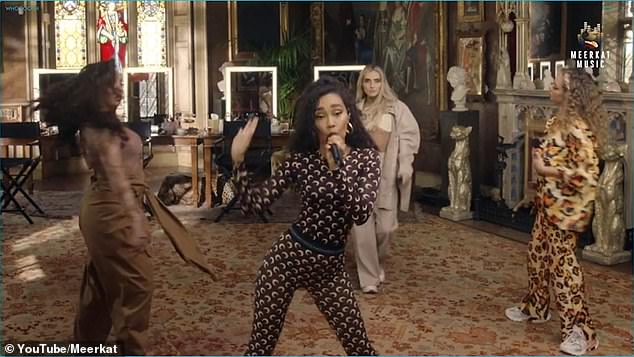 Style: Leigh-Anne Pinnock exuded confidence in a moon pattern bodysuit which was similar to the ones recently worn by superstar singers Beyonce and Adele

Jade was quick to answer, saying: ‘Each other, we’re together 24/7 so being apart has been really strange.’

The glam girls also had a little sing along to Take That, referencing the boy band’s appearance on Meerkat Music earlier in lockdown.

As well as belting out their catchy tunes during the special, Little Mix showed off their dance moves perfectly pulling off choreography in the luxurious setting.

After moving around the main room, they danced down an impressive staircase and out onto a stage which was lit with red lights and fireworks. 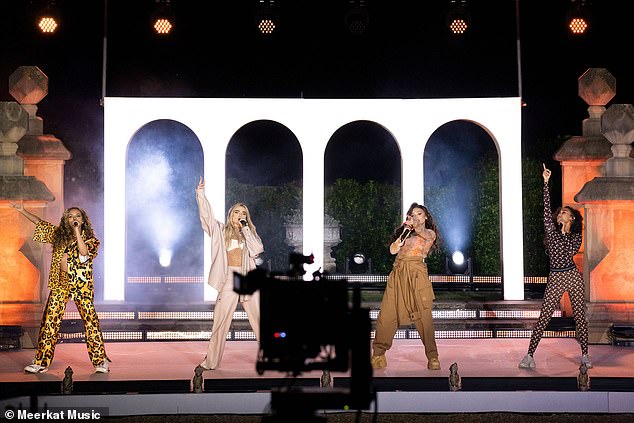 Star power: After performing inside the house, Little Mix took to a makeshift stage outside 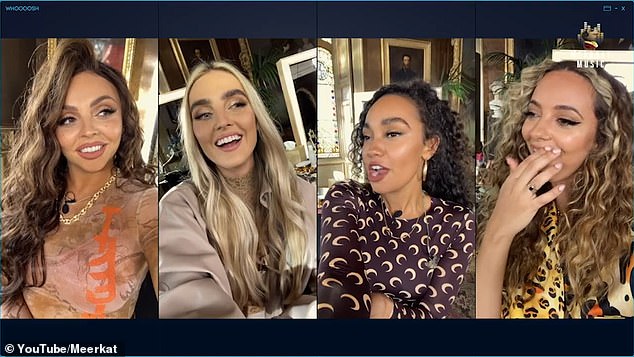 Beautiful: The girls appeared to be in good spirits as they video called with Aleksandr Orlov the Meerkat to start their performance 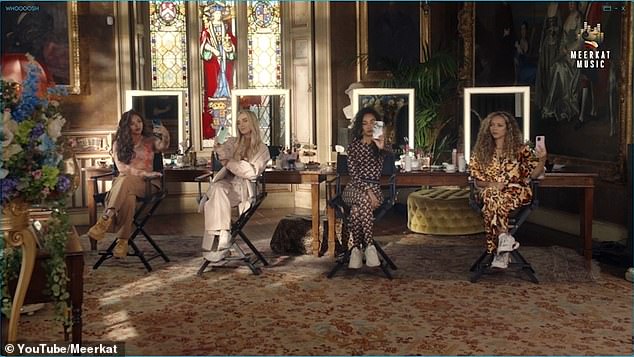 Matchy matchy: The band coordinated their chic outfits, all opting for neutrals with a splash of pattern

Perrie’s performance comes after her personal trainer Danielle Peazer shared how she helped transform the singer’s confidence ahead of her Ibiza getaway earlier this month.

In a candid post uploaded to Instagram last week, the Little Mix star revealed the 32-year-old dancer’s DPM60 workout plan made her feel her best yet as she didn’t ‘pick herself apart’ in ‘post-holiday pictures’ for the first time.

The fitness guru confessed the musician quickly became ‘motivated and positive’ after ‘moaning’ at the start of the two-week programme, which featured full-body workouts, two-minute planks and two gym sessions a day. 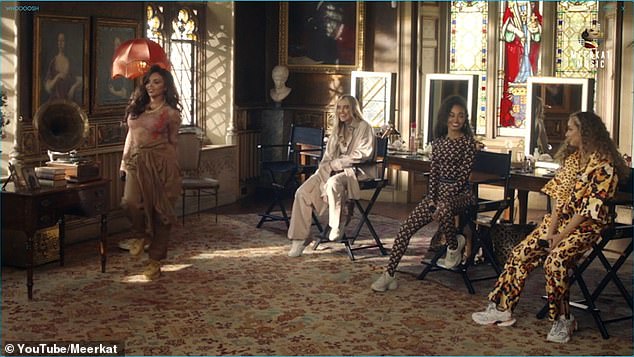 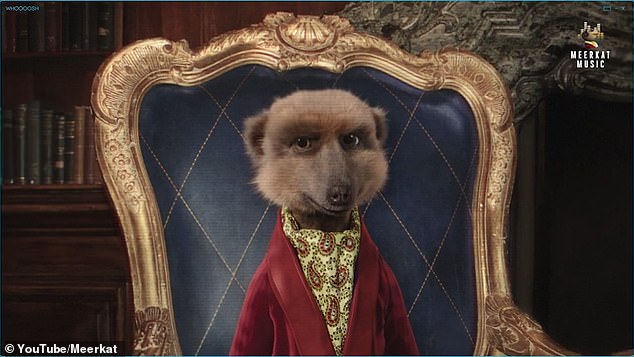 Funny: CGI meerkat Aleksandr Orlov chatted with the singers during the show and asked them how lockdown had been

Danielle told new! magazine: ‘We focused on full body work. We did quite a lot of abs and lower body work – she said she enjoys that the most. So I had her doing a plank for two minutes, which is a very long time for anyone.’

Liam Payne’s former girlfriend said the Break Up Song hitmaker even took it upon herself to exercise more than once a day with her guide – a 60-day plan with more than 100 workouts.

The influencer added: ‘She also did workouts when I wasn’t there, which I was really impressed with. Some days she was doing extra in the evening, just because she was enjoying the workouts I was giving her.

‘The first day I had a few moans, but by the end of the two weeks, Perrie was like, “Yeah sure, let’s do it, let’s go. She seemed really motivated and positive.’

Earlier this month, Perrie credited Danielle for playing a huge role in helping her stay in shape.

The media personality – who was holidaying with her footballer boyfriend Alex Oxlade-Chamberlain wrote on Instagram alongside a paparazzi picture of herself paddle boarding: ‘I will never be able to control being photographed without being aware. I always dread post-holiday pics.

‘I reached out to my girl @DaniellePeazer (very last minute [eye roll emoji]) before my holiday and she put me through my paces and I’m so thankful.’ 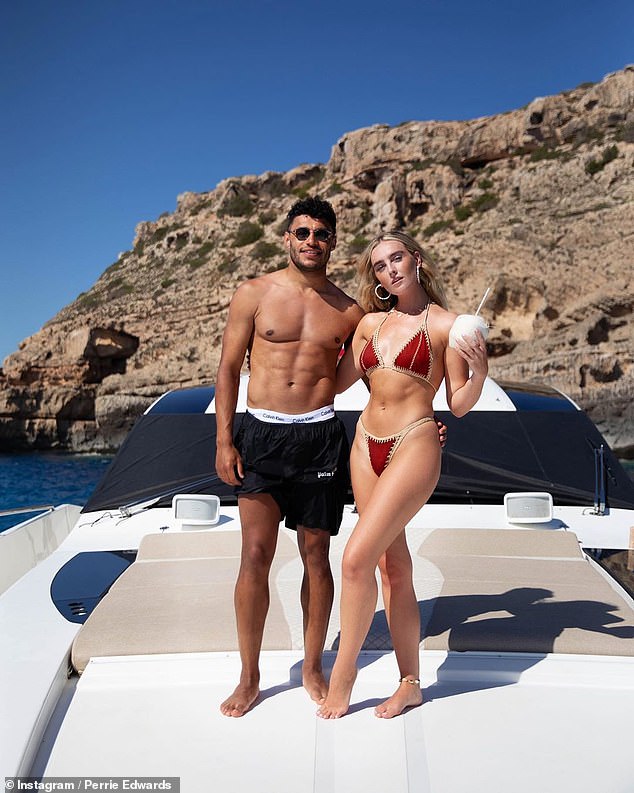 ‘She was motivated’: Perrie’s trainer Danielle Peazer recently shared how she helped the singer transform her confidence ahead of her Ibiza trip (pictured with Alex Oxlade-Chamberlain)