Nikki and Brie Bella stepped into the WWE ring to compete against 28 other female talents and get an opportunity to move on to main-event Wrestlemania 38 at the 2022 Royal Rumble on Jan. 29.

Nikki and Brie Bella are back! The 38-year-old superstar twins made their triumphant return to WWE to compete in the 2022 Royal Rumble on Jan. 29 after being away for three years. Although they brought on a lot of excitement and cheers from their devoted fans, they didn’t end up winning. Ronda Rousey ended up going home the winner, eliminating both Nikki and Brie as well as Charlotte Flair. She will now go on to participate in WrestleMania 38 from AT&T Stadium in Dallas, TX on April 3-4.

The Bella twins looked fantastic and fit when they joined the match at the Royal Rumble at No. 19 when Brie entered. Nikki was out at No. 24 and Sarah Logan surprised many when she entered at No. 25, when there were 10 women still in the match. Sarah was immediately eliminated by the Bella Twins before they ultimately ended up getting eliminated as well, leaving Ronda to come out on top.

Nikki and Brie’s WWE return was first announced during the Jan. 7 episode of SmackDown. They were listed among the roster of women set to take part and their fans quickly became overjoyed. The twins talked about the exciting opportunity on their podcast on Sirius XM’s Stitcher and shared their confidence.

“Brie, I don’t know about you, but I’m going in to win,” Nikki told her sister on the Jan. 12 episode of The Bellas Podcast. “I’ve had unfinished business with Charlotte [Flair], so why wouldn’t I want to go back there [to the WWE]?” 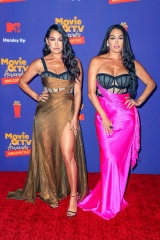 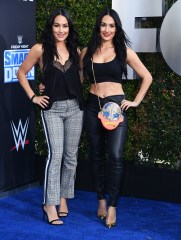 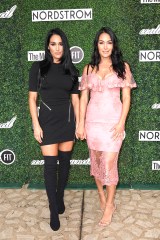 “And then, I’ve never had business with Becky [Lynch] and I would love it,” Nikki added. “And then, there are the [Women’s] Tag titles. Because I would kind of like to be the first-ever winner of the Royal Rumble to kind of give the middle finger to both champions, to go, ‘I want the tag titles.’ Like, how badass would that be? Would I not be the coolest person to go down in history? I’d feel like I’d have a little “Stone Cold” Steve Austin to me.”

Brie also talked about her reasons for wanting to go back.  “I feel like, the last Royal Rumble – the only one I’ve been in, the first-ever women’s Royal Rumble – the way I was taken out, it wasn’t very nice,” she said before Nikki smiled and responded with, “I don’t even remember.” Brie then accusatorily answered, “Oh, you don’t? Because it was you” before cheekily adding, “And you better watch your back too, girl.”