In a night teeming with tiny gold statues, Natalia Bryant’s skirt might have shined most brightly of all.

The model, 19, wore a dress with a spaghetti-strap black top and a bright gold skirt to the Vanity Fair Oscar Party in Beverly Hills on Sunday. The top’s plunging neckline fell to the middle of the USC student’s chest, exposing a necklace with a large white pendant.

Her mother Vanessa took to Instagram to call her mini-me a ‘golden goddess’ adding, ‘That’s my baby!’ 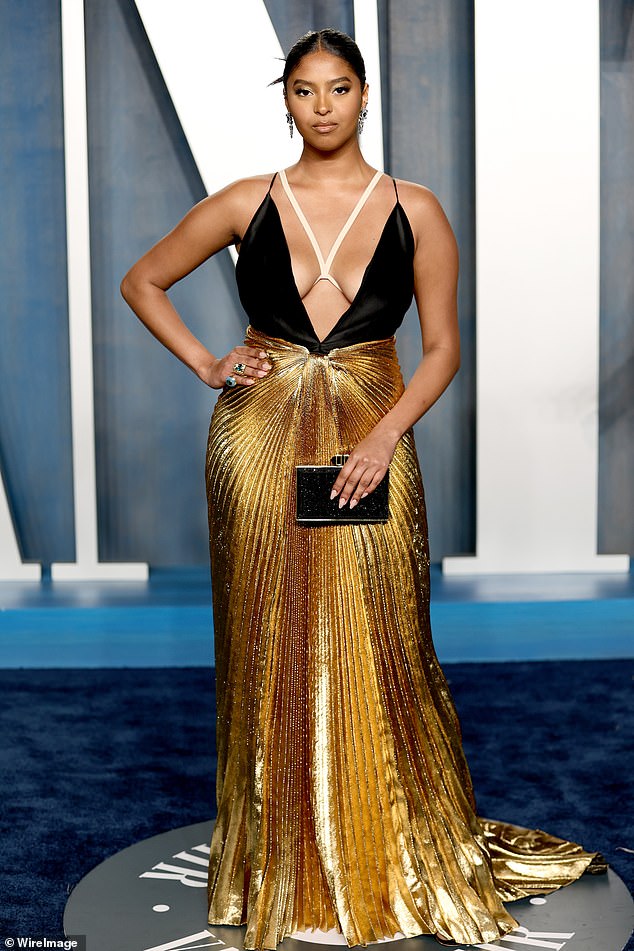 She shone: Natalia Bryant goes with plunging neckline and shiny gold skirt as she arrives at the Vanity Fair Oscar Party in Beverly Hills

Bryant’s flashy skirt started at about the middle of her stomach and ended in a small train that dragged on the floor behind her as she walked.

Natalia tied her hair tightly behind her head, revealing the huge diamond earrings dangling down a few inches.

The daughter of Kobe Bryant’s appearance at the event came close to five years after her late father’s Oscar-winning short film Dear Basketball was initially released. 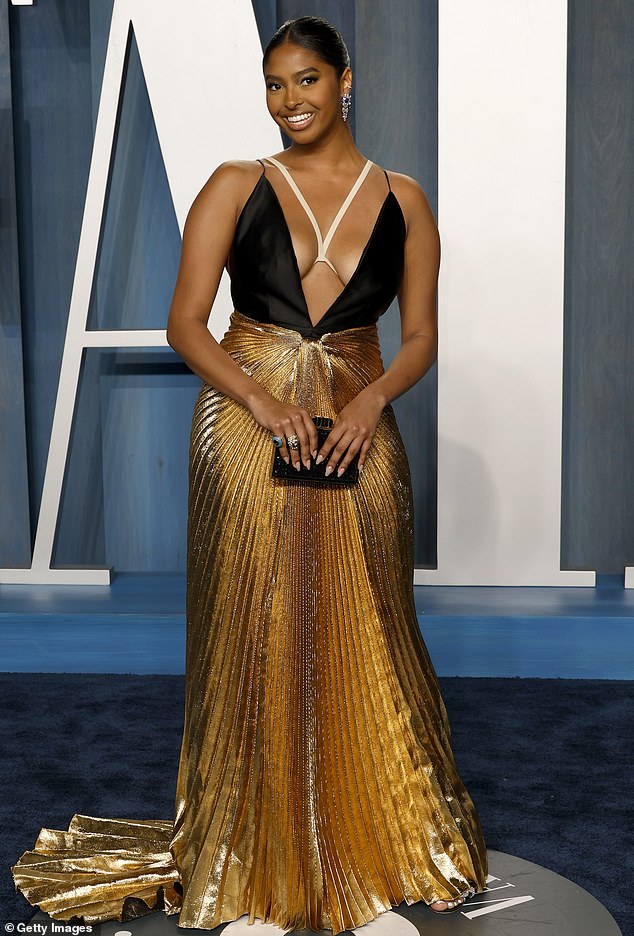 Another glittering star: The model, 19, wore a dress with a spaghetti-strap black top and a bright gold skirt 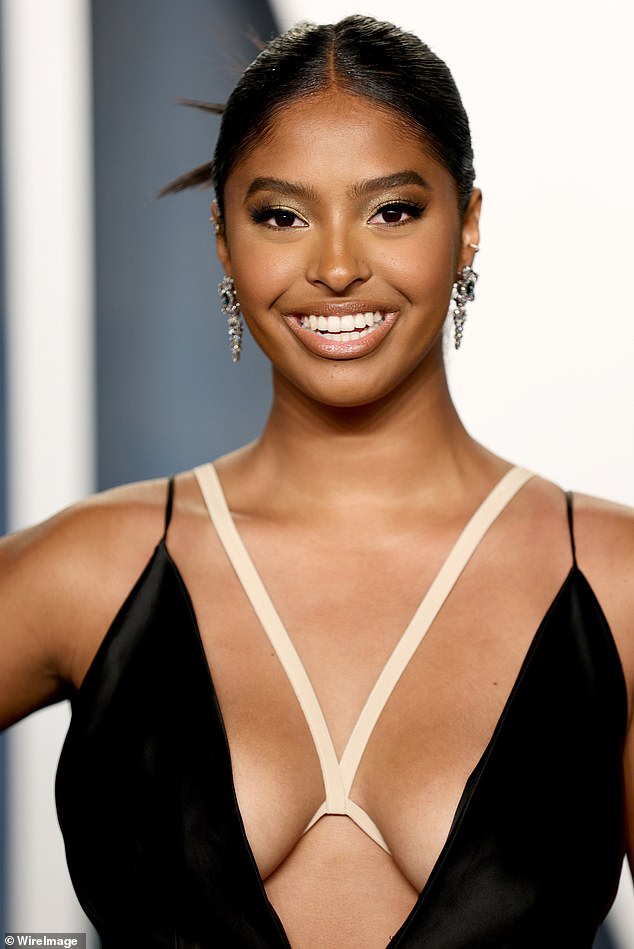 Showing off her diamonds: Vanessa’s hair was tied tightly behind her head, revealing the huge silver earrings dangling down 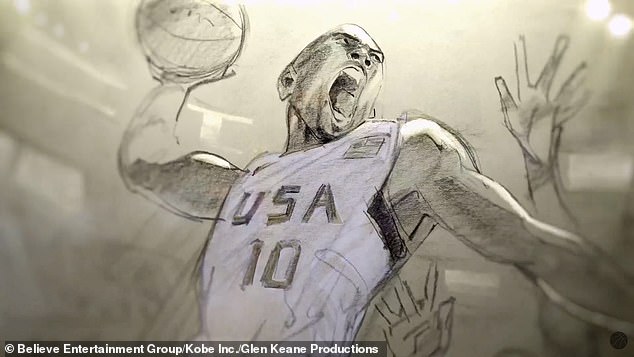 Daughter of an Oscar winner: The daughter of Kobe Bryant’s appearance at the event came close to five years after her late father’s Oscar-winning film Dear Basketball was released

Despite his tragic death, Natalia’s mother Vanessa recently announced that the family will continue to partner with Nike and make more Kobe and Gigi Bryant inspired shoes.

‘We’re excited to announce our partnership with Nike is going to continue!’ Vanessa, 39, said in a post on Instagram Thursday. ‘I am so proud that my husband’s shoes are still the most worn by players on NBA courts and that the demand for his shoes remain so desired by his fans around the world.

‘With this new partnership, fans will soon be able to have access to Kobe and Gigi Nike product for years to come and with Nike donating 100% of the net proceeds yearly for Gianna’s shoes to our Mamba and Mambacita Sports Foundation (M&MSF).’ 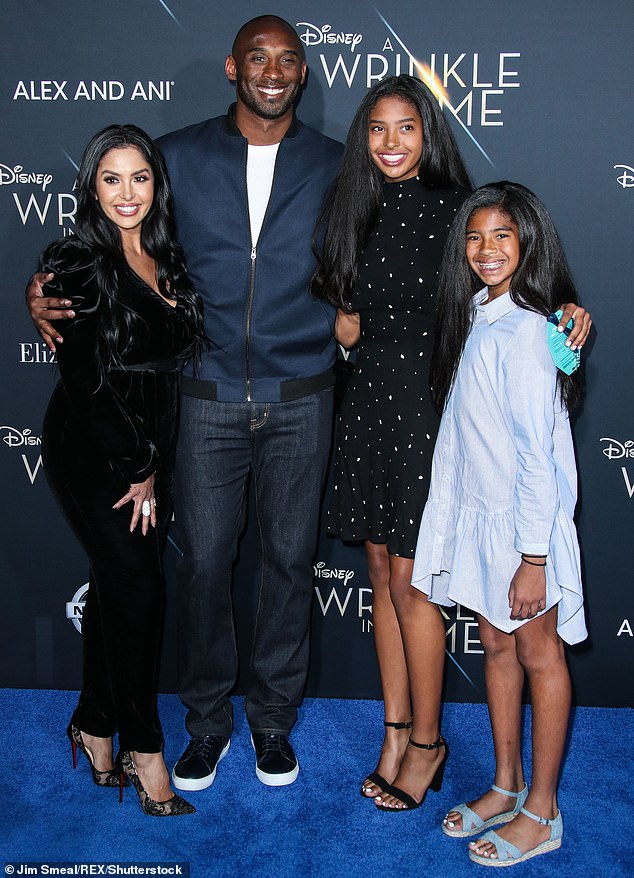 Tragic death: Kobe Bryant and Gigi Bryant were died in a Helicopter crash back in 2020 along with seven others (L to R: Vanessa Bryant, Kobe Bryant, Natalia Bryant and Gianna Bryant in 2018) 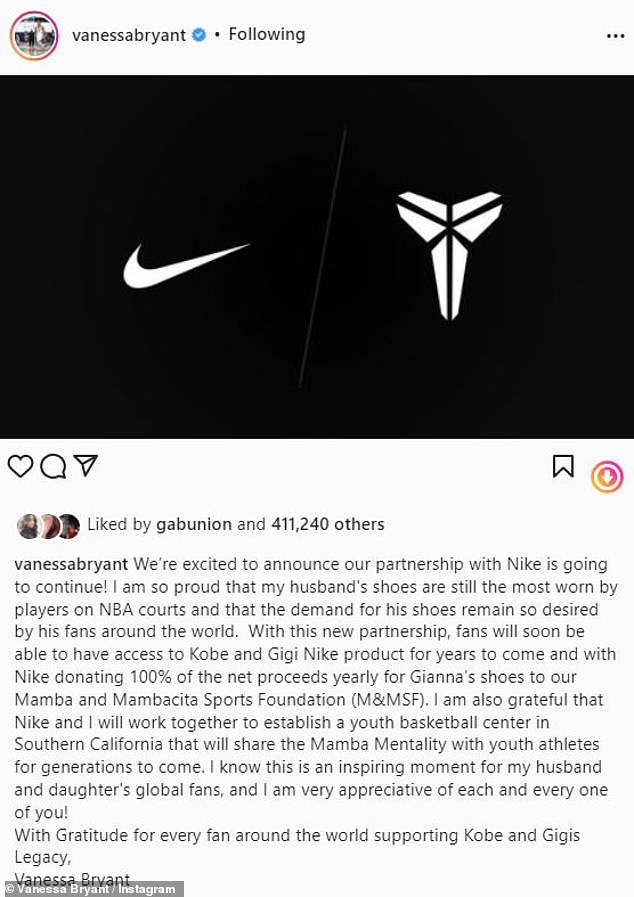 The legacy lives on: Natalia’s mother Vanessa recently announced that the family will continue to partner with Nike and make more Kobe and Gigi Bryant inspired shoes

Vanessa said she was ‘grateful’ to collaborate with Nike on the establishment of ‘a youth basketball center in Southern California that will share the Mamba Mentality with youth athletes for generations to come.’

Vanessa, who is mom to daughters Natalia, 19, the late Gigi, 13, Bianka, five, and Capri, two, with late NBA icon, called the business endeavor ‘an inspiring moment’ for fans of Kobe and Gigi, and said that she’s ‘very appreciative’ for all of them.

The renewed business relationship came less than a year after the late Los Angeles Laker star’s deal with Nike expired in April of 2021.