Michelle Rodriguez still has an incredibly toned body at age 42.

And she proved that again on Thursday as she seen taking off her wet suit after a surf session in Malibu with friends.

The Fast & Furious showed off her abs, sculpted arms and strong legs in a gray bikini before putting on a wet suit to enter the chilly Pacific Ocean. 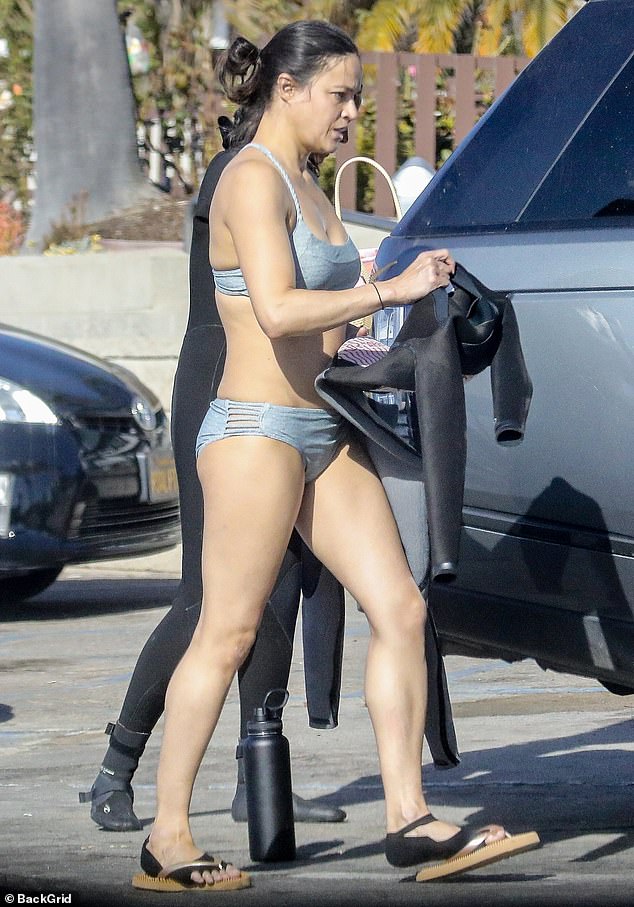 Getting a hand: Michelle Rodriguez needed some help putting a wetsuit on before a surfing trip in Malibu on Thursday

Before donning the swimwear, the Machete actress was seen wearing a bikini top with a matching bottom and sandals; she kept her normally flowing brunette hair tied back for the length of the trip.

She eventually made it into the waves, and looked to be having a great time as she caught the end of a break.

At the end of the session, the actress required some more assistance with her wet suit, and a friend ended up helping her take it off.

Rodriguez is best known for her longstanding role as racer and mechanic Letty Ortiz in the action film series Fast & Furious. 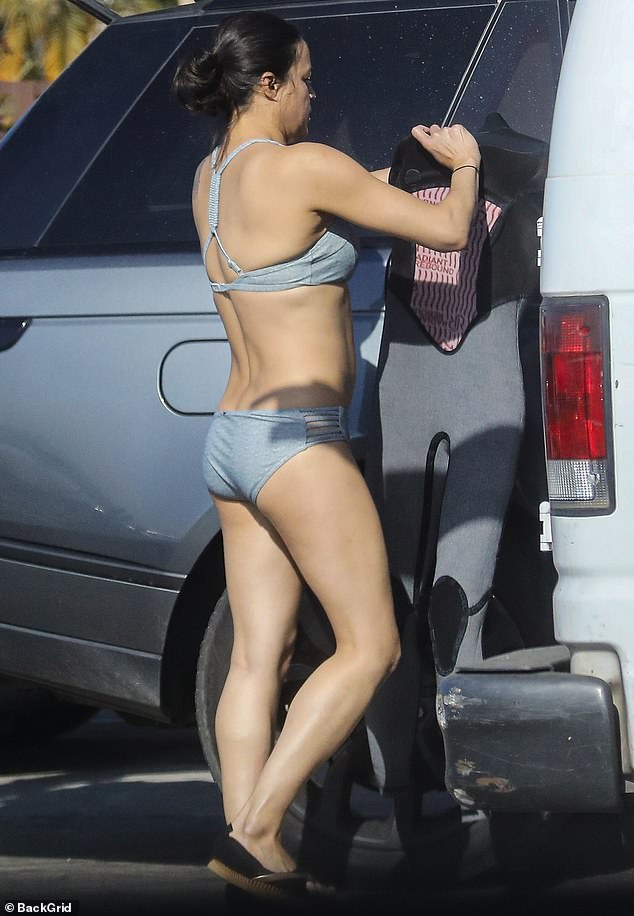 Keeping it simple: The Resident Evil franchise star opted for a light blue bikini top with a matching bottom and sandals

Her first role in the franchise came in the first film in the series, which was released in 2001; it grossed over $200million at the box offices.

She then went on to appear in the fourth film, entitled Fast & Furious, where her character was seemingly killed off; it was revealed in the fifth movie in the series that Ortiz was still alive.

Rodriguez later appeared in the sequels following her character’s revival, and has been a mainstay ever since; she is slated to co-star in the upcoming ninth film in the series, F9.

The Justin Lin-directed film will reportedly feature a first for the franchise with a scene set in space, which the actress confirmed earlier this year. 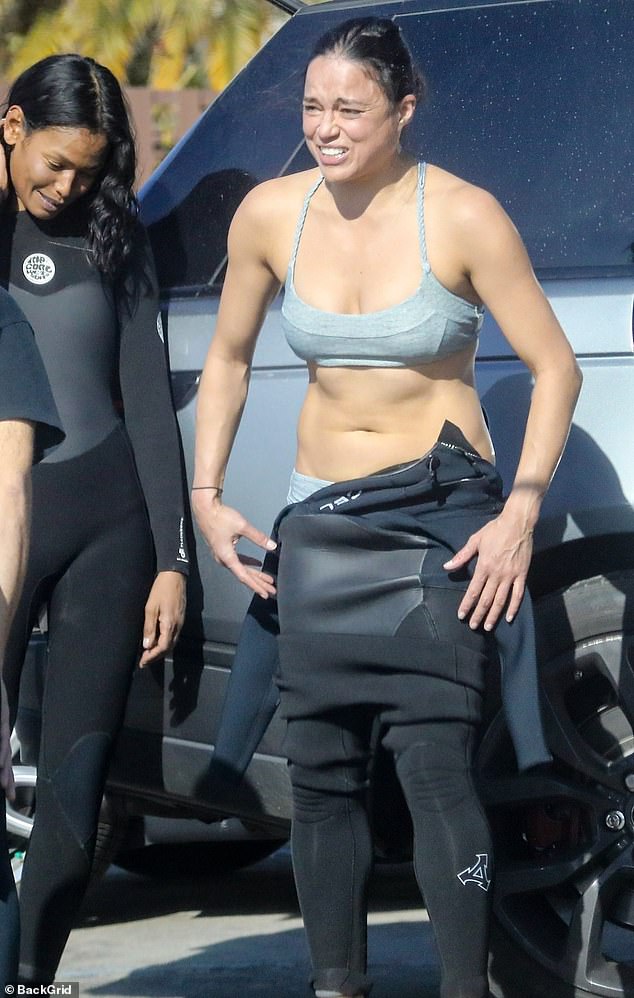 One more time: After the trip ended, Rodriguez still needed a little help taking her swimwear off 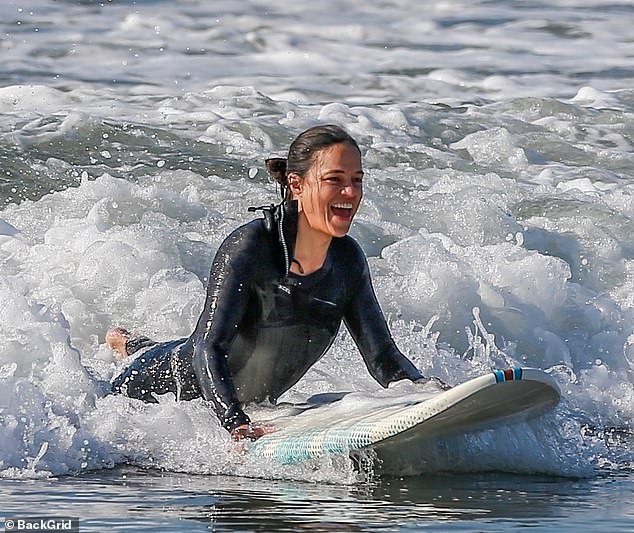 Series star: The actress has been a mainstay in the Fast and Furious franchise, first appearing in the initial 2001 film

A tenth installment in the series, also set to be directed by Lin, is set to follow and is slated to be released in April of 2022.

Rodriguez is also known for her role as helicopter pilot Captain Trudy Chacon in the 2009 sci-fi epic Avatar, which held the record for being the highest-grossing film in history until its earnings were surpassed by 2019’s Avengers: Endgame.

A number of sequels to the film are currently in production, and it was reported that certain actors whose characters died onscreen in the original film would be returning for the following ones.

Rodriguez was not among this group of individuals; set to return are Sigourney Weaver and Stephen Lang, among others. 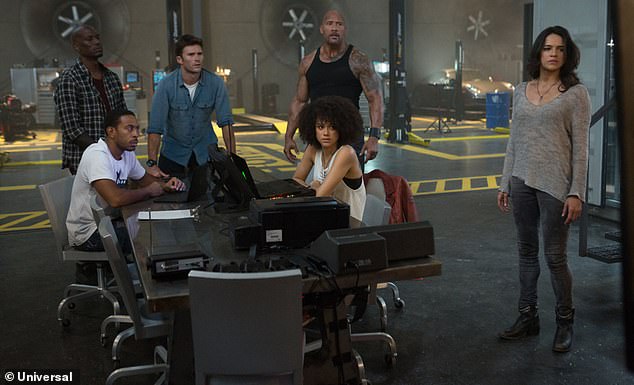 Sticking around: The actress has been involved in multiple films in the action franchise; she is seen with her other costars in 2017’s Fast & Furious 8