Michelle Mone looked incredibly youthful while posing with her glamorous lookalike mother Isobel for a festive snap on Friday.

Wishing her fans a Merry Christmas, the lingerie mogul, 50, shared the image to her Instagram as she stood with her equally glamorous mother Isobel, 72.

Fans branded the pair ‘twins’ in the comments section as they noticed their similar appearance. 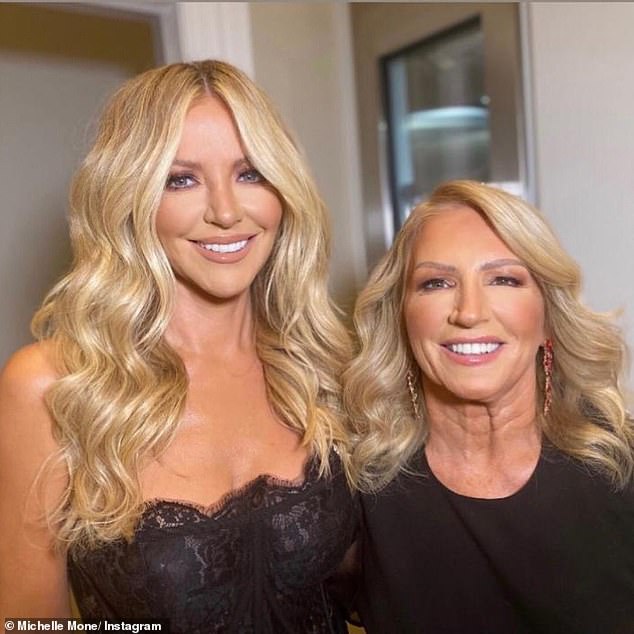 Wow! Michelle Mone looked incredibly youthful while posing with her glamorous lookalike mother Isobel for a festive snap on Friday

Michelle looked gorgeous in a strapless black lace dress and wore her blonde tresses in a bouncy blow dry, while her mum opted for a simple scoop-neck top.

She penned in the caption: ‘Wishing you all a very Merry Christmas! Picture of me & my wee Mum. May it bring joy to your hearts and happiness to your homes!

‘Here’s to being surrounded by our nearest and dearest at this special time. My thoughts are with those who can’t be together with their loved ones today. From my family to yours – have a fabulous day tomorrow!’

One commenter wrote underneath: ‘Mum, more like twin sisters. Have a very happy and safe Christmas!’ 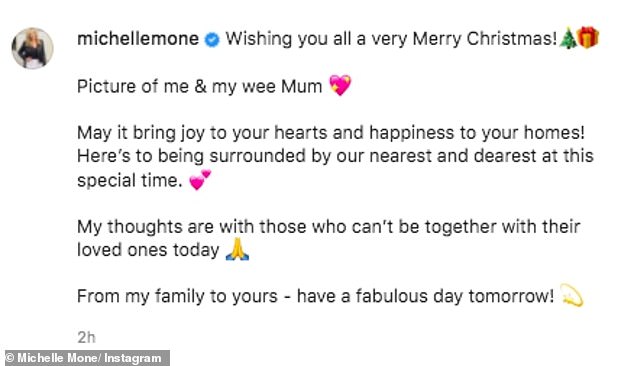 Happy: She penned in the caption: ‘Wishing you all a very Merry Christmas! Picture of me & my wee Mum. May it bring joy to your hearts and happiness to your homes!’

It comes after Michelle hit back at racism allegations last week.

She has claimed a man of Indian heritage put a Native American style headdress on her during a day of ‘drinking and partying’, just weeks before he accused her of racially abusing him.

The businesswoman risked being accused of ‘cultural insensitivity’ by donning the headdress made of black feathers during an al fresco lunch at an expensive restaurant on the French Riviera.

She was pictured in the controversial headgear just three weeks before she allegedly sent the offensive WhatsApp message to financial consultant Richard Lynton-Jones, describing him as being a ‘waste of a man’s white skin’.

Lady Mone and her husband were with Monaco-based Mr Lynton-Jones, 42, and 15 other people on two superyachts when they all had lunch together at La Guerite restaurant set on a rocky cove overlooking Cannes on the small island of Île Sainte-Marguerite.

She claimed Mr Lynton-Jones had put the headgear on her head after fetching it from a box of fancy dress hats and outfits at the restaurant.

The lavish day out ended in tragedy when the second yacht which had Mr Lynton-Jones on board smashed into the yacht owned by Lady Mone’s multi-millionaire husband, killing a British deckhand. 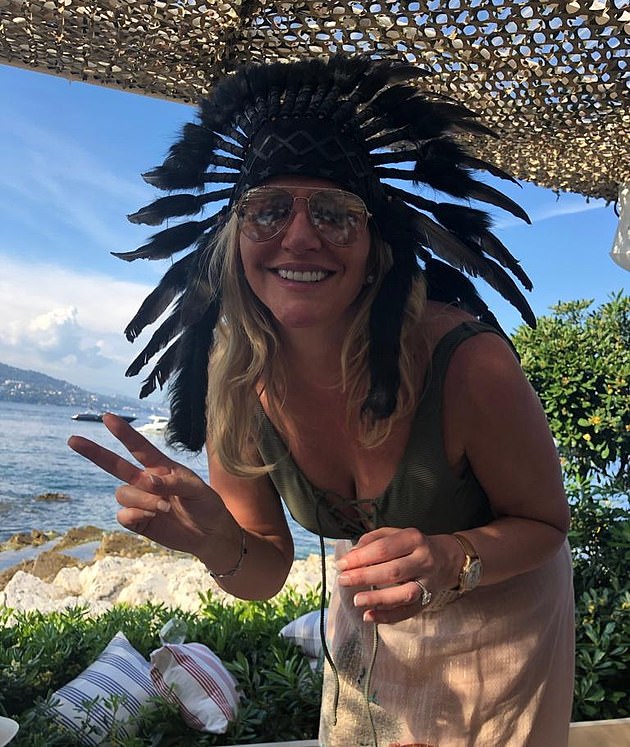 Incident: It comes after Michelle recently claimed a man of Indian heritage put a Native American style headdress on her during a day of ‘drinking and partying’, just weeks before he accused her of racially abusing him

She made a statement apologising for any offence she had caused after MailOnline told her that it had a photograph of her wearing the headdress, and a second snap showing her with her husband who was wearing another headdress with white feathers.

Michelle admitted having it on for a brief period and claimed to have been ‘set up’ by having it placed on her head by the man who later accused her of racism.

Her representatives said last week that she strongly denied making any comments with racist intent and had believed that Mr Lynton-Jones was ‘100 per cent white and British’.

They also denied she had a lack of respect for ‘those persons genuinely suffering with mental health difficulties’.

Mr Lynton-Jones said he had ‘no memory’ of placing any headdress on Lady Mone’s head during the lunch at the restaurant which he described as ‘a long day’.

He claimed that the video in which he was filmed saying, ‘Michelle, Michelle, I’ve got one for you too’ could have shown an incident when he had just bought two USB sticks of stored music from the restaurant’s DJ at the request of her husband. 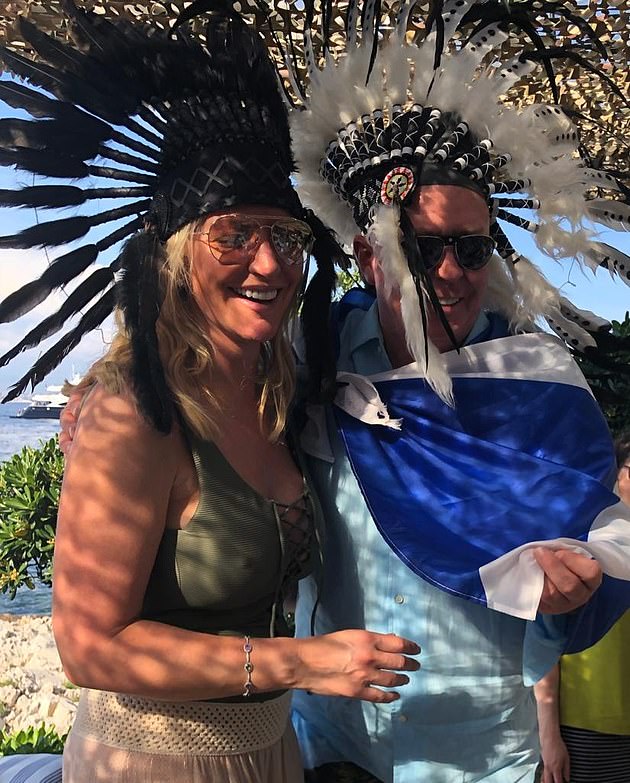 Timeline: The former lingerie tycoon, nicknamed ‘Baroness Bra’, was pictured wearing the headdress along with her husband Doug Barrowman three weeks before she allegedly sent a racist text to a private banker of Indian heritage

‘What I can’t understand is why she is trying to drag me back into this again? All I ever wanted from her was an apology for the racist comment. The Indian headdress has nothing to do with what she called me.

‘I have suffered racial abuse throughout my life and as usual when you stand up for what is right and call it out, you end up being attacked.’

Asked to respond to the claim that he had tried to ‘set up’ Lady Mone by putting the headdress on her head, he said: ‘That is just bizarre. Why would I plan something two years later about racism after a yacht crash which had not yet taken place?

‘I don’t know why she keeps dragging me back into this. All I want is an apology for her racist abuse. It has no place in today’s society, especially from a member of the House of Lords.

‘I have suffered abuse my whole life. I was attacked and spent weeks in hospital. I had three brain haemorrhages, three fractures to my skull, a broken nose and a broken cheek bone from a racist attack. I am very much anti racism.’

The wearing of headdresses made of feathers used to be popular at music festivals and at fancy dress parties, but has become increasingly taboo and seen as culturally inappropriate in recent years. 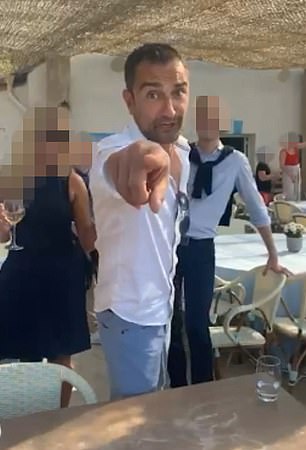 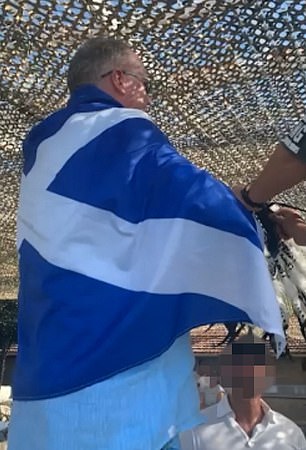 Pictured: Mr Lynton-Jones is pictured (left) in footage where he says, ‘Michelle, Michelle, I’ve got one for you too’ while Ms Mone’s husband Mr Barrowman puts on a Native American headdress at a party at an exclusive restaurant on the French Riviera