Martine McCutcheon’s brother dies aged 31: Heartbroken star reveals her sibling LJ has suddenly passed away without a ‘medical explanation’ just a month before his wedding

Martine McCutcheon has revealed her brother has suddenly died aged 31 without medical explanation.

The heartbroken TV star, 46, took to Instagram on Tuesday to reveal her only sibling Laurence John, aka LJ – who had a mild form of special needs – died two weeks ago.

She said the website designer had been due to get married to his fiancée Jay Eaton, in a month’s time and Martine, who was going to be bridesmaid, had seen her brother just a few days before he had died.

Sharing a couple of photos of LJ, Martine wrote: ‘My heart is forever broken, My baby brother, my gentle giant, sadly passed away, suddenly, 2 weeks ago. He was 31 years old. 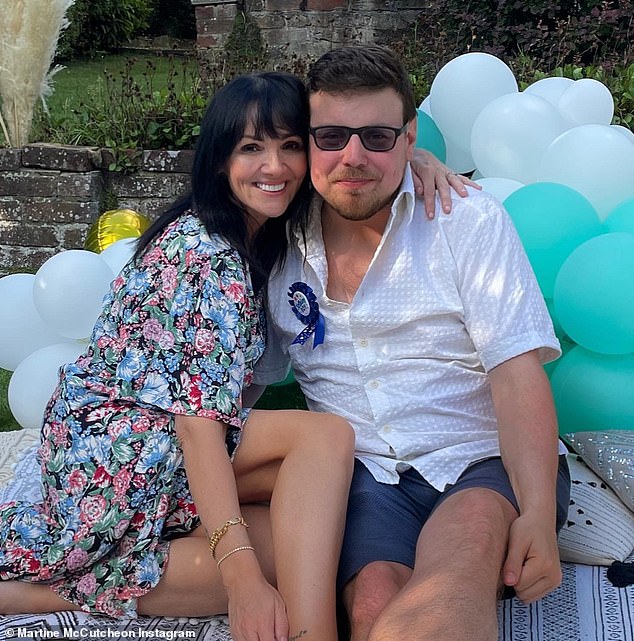 Martine McCutcheon’s brother has died aged 31: Heartbroken star reveals her sibling Laurence John has suddenly passed away without explanation a month before his wedding 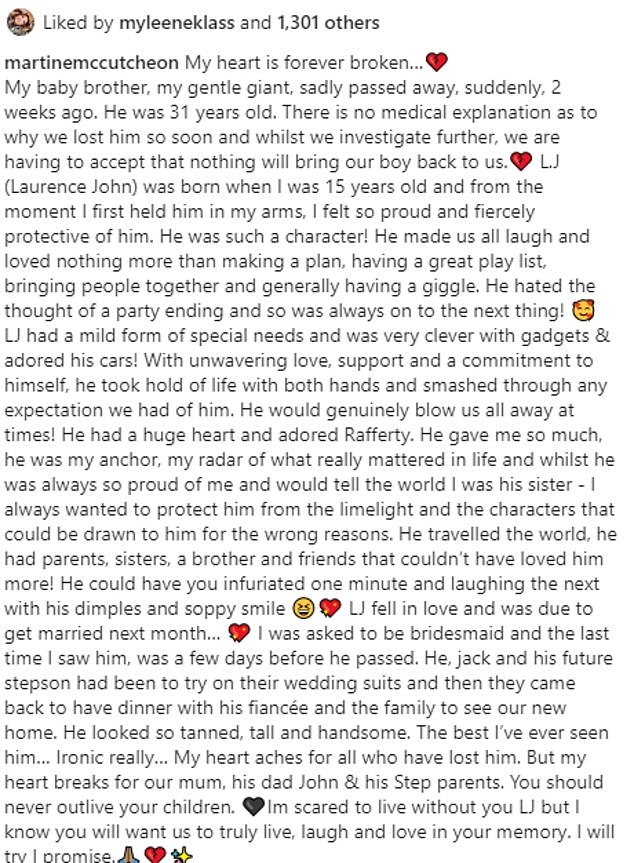 ‘My heart is forever broken’: Martine shared this lengthy post alongside the picture of herself with her beloved brother

‘There is no medical explanation as to why we lost him so soon and whilst we investigate further, we are having to accept that nothing will bring our boy back to us.

‘L.J (Laurence John) was born when I was 15 years old and from the moment I first held him in my arms, I felt so proud and fiercely protective of him. He was such a character!

‘He made us all laugh and loved nothing more than making a plan, having a great play list, bringing people together and generally having a giggle. 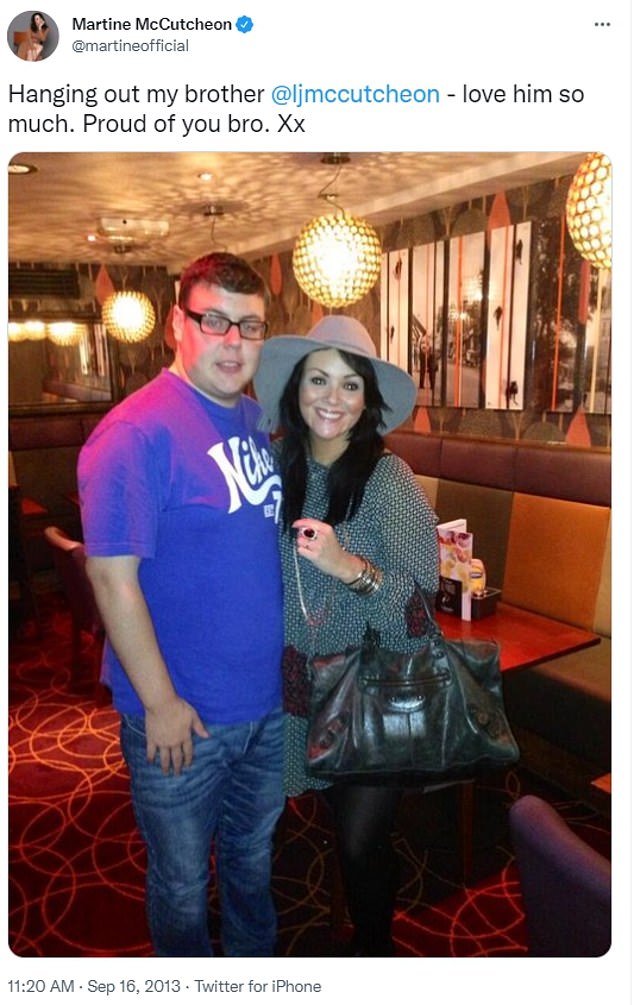 Special bond: Myleene shared this Instagram picture with her brother in 2013, writing about how much she loved him – she was just aged 15 when he was born

Love: LJ’s Instagram bio described him as a ‘proud brother to his sister @martinemccutcheon

‘He hated the thought of a party ending and so was always on to the next thing!  LJ had a mild form of special needs and was very clever with gadgets & adored his cars!’

She continued: ‘With unwavering love, support and a commitment to himself, he took hold of life with both hands and smashed through any expectation we had of him. He would genuinely blow us all away at times!

‘He had a huge heart and adored Rafferty. He gave me so much, he was my anchor, my radar of what really mattered in life and whilst he was always so proud of me and would tell the world I was his sister – I always wanted to protect him from the limelight and the characters that could be drawn to him for the wrong reasons. 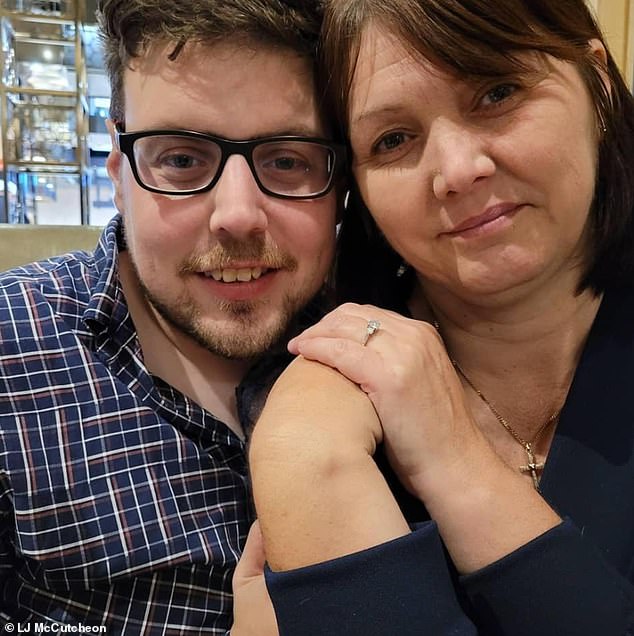 Sad loss: LJ pictured with his fiancée Jay Eaton on April 13. He had written: ‘Can’t wait to see you walk down the aisle on our wedding’ 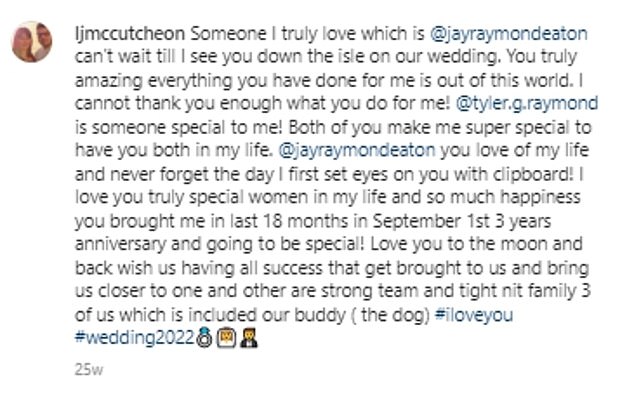 So sad: He had shared this post about being excited about getting married to Jay

‘He travelled the world, he had parents, sisters, a brother and friends that couldn’t have loved him more! He could have you infuriated one minute and laughing the next with his dimples and soppy smile.

‘LJ fell in love and was due to get married next month… I was asked to be bridesmaid and the last time I saw him, was a few days before he passed.

He, Jack and his future stepson had been to try on their wedding suits and then they came back to have dinner with his fiancée and the family to see our new home. 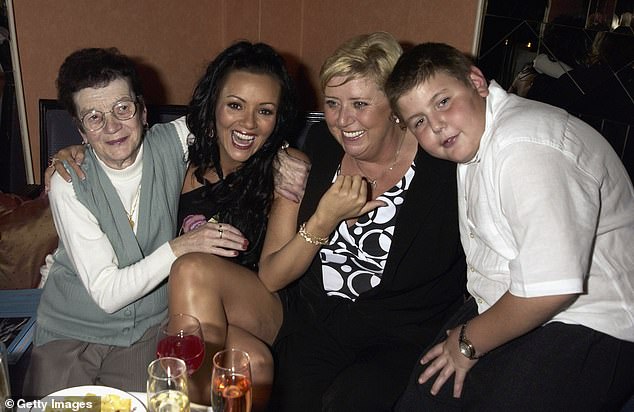 Family: Martine pictured sharing a joke with her grandmother, mother and brother at her Behind The Scenes book launch at Claridge’s on October 21, 2003 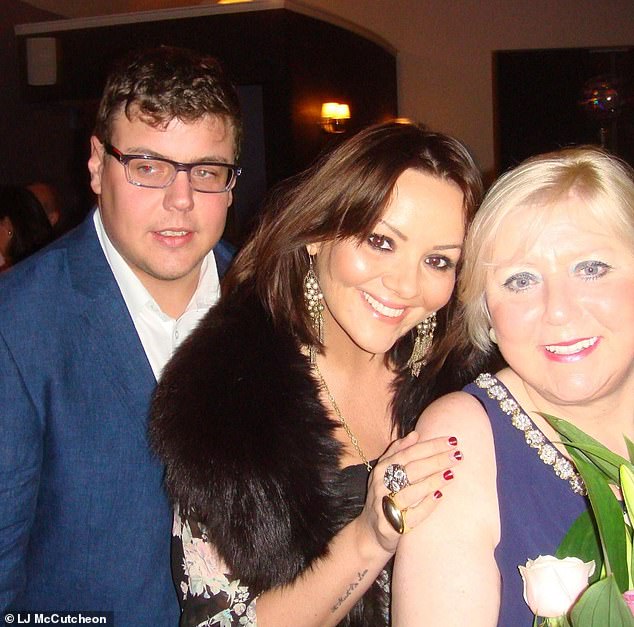 Together: LJ pictured with sister Martine and his mother Jenny Tomlin 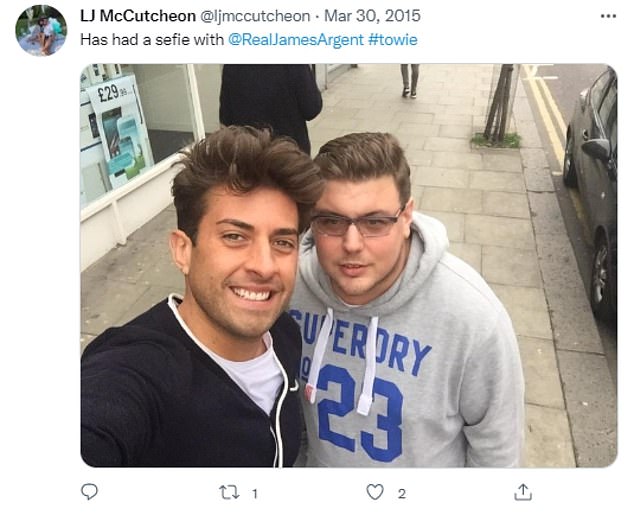 Out and about: LJ shared this picture of himself with TOWIE star James Argent back in 2015 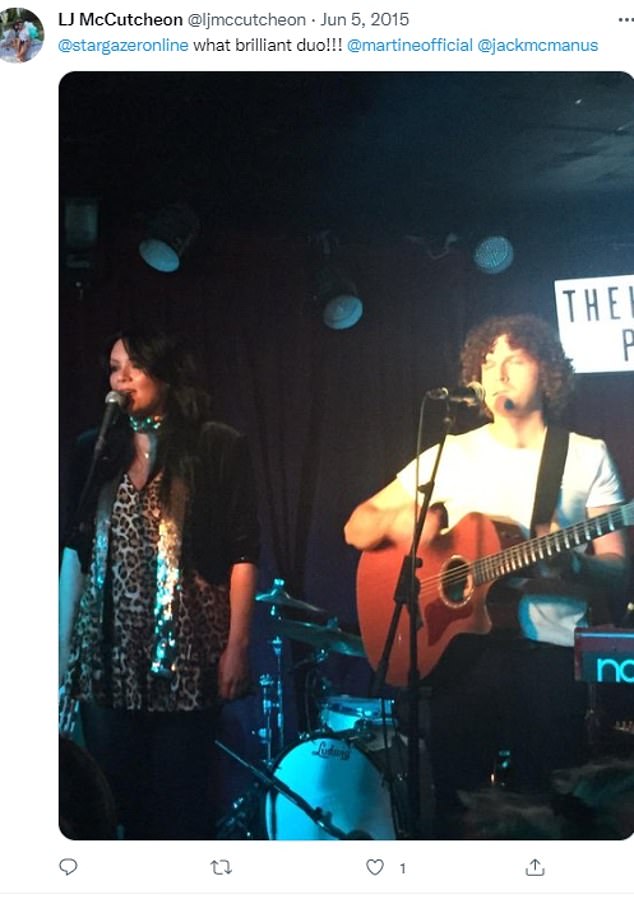 Proud brother: He shared this picture of Martine on stage with her husband Jack McManus back in 2015

‘He looked so tanned, tall and handsome. The best I’ve ever seen him… Ironic really…

‘My heart aches for all who have lost him. But my heart breaks for our mum, his dad John & his Step parents.

‘You should never outlive your children. I’m scared to live without you LJ but I know you will want us to truly live, laugh and love in your memory. I will try I promise.’

In 2021, LJ shared the same photo and wrote: ‘This is a very special photo to me. I would like to thank my big sister for organising a summer birthday celebration last Saturday!

‘Martine has been there though out my life and seen me grow into the person I am today. I have struggles with life with and my special needs but I’ve overcome the obstacles I have faced throughout my years. 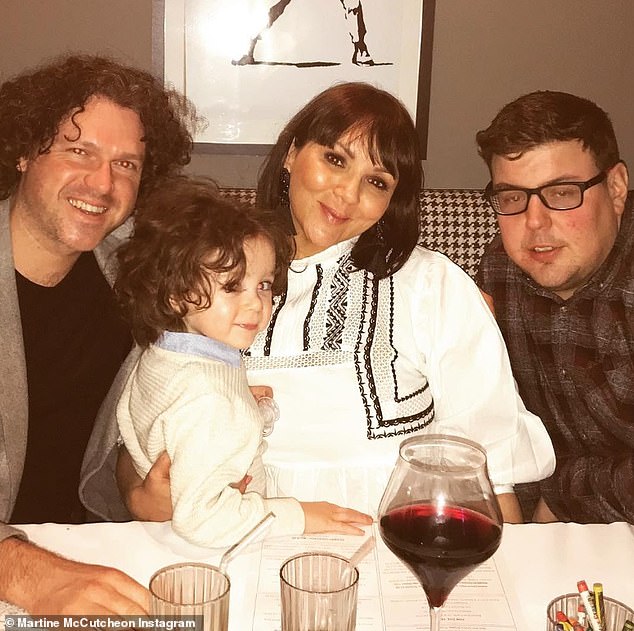 ‘He had a huge heart and adored Rafferty’: Martine said her brother was very close to her little boy, (pictured) 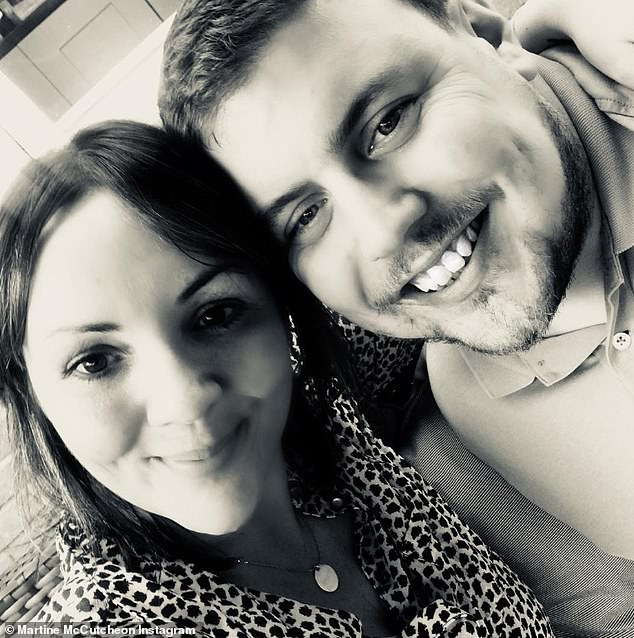 Close: Martine shared this snap in 2018 and wrote: ‘Me and my bro #neverfailstomakeuslaugh’

‘My sister has been inspirational to me’: LJ shared this caption on the same photo Martine shared on Monday when he posted it last year 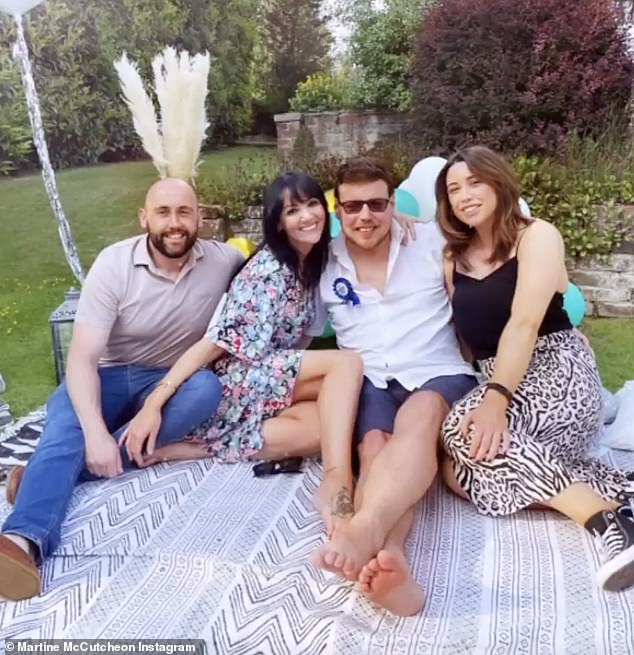 Sweet: The actress and TV personality posted a collection of images with her brother, (second from right) on his 30th birthday back in June 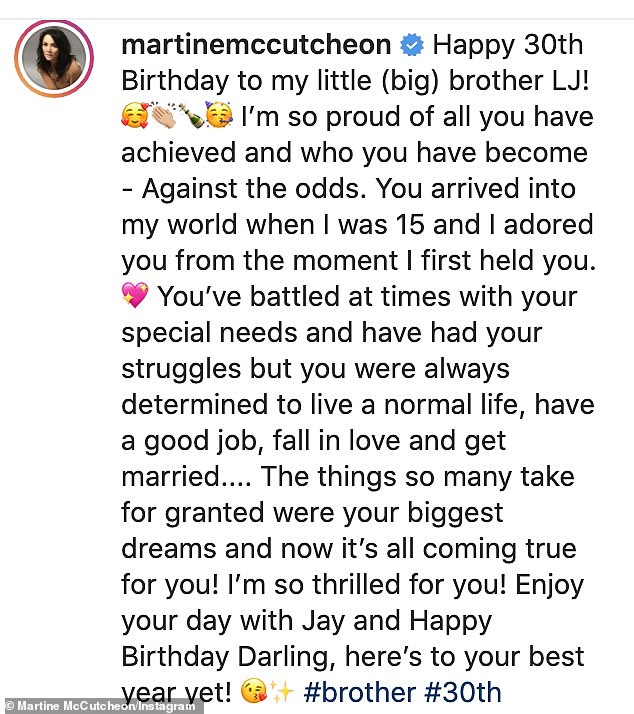 Last year: Alongside the sweet birthday snap, Martin penned a lengthy caption praising her brother for being ‘determined to live a normal life’ despite his struggles

‘My sister has been inspirational to me. Martine made my 30th very special and I’m making a week of it! Love you so much @martinemccutcheon #30 #family #sibbings.’ [sic]

Myleene Klass was among the first to offer her condolences to Martine.

She wrote; ‘Martine. My heart is utterly broken for you. I am so very sorry.’

Claire Sweeney wrote: ‘Darling im so sorry to hear this.’

LJ’s Instagram bio reads: ‘I’m LJ proud brother to my sister @martinemccutcheon. Founder of @mccutcheonwebsitedesigns and fiancé to my beautiful wife to be my soulmate forever.’

Martine previously posted a birthday message to her brother on his 30th birthday last June.

She wrote at the time: ‘Happy 30th Birthday to my little (big) brother LJ!

‘I’m so proud of all you have achieved and who you have become – Against the odds. You arrived into my world when I was 15 and I adored you from the moment I first held you.

‘You’ve battled at times with your special needs and have had your struggles but you were always determined to live a normal life, have a good job, fall in love and get married…

‘The things so many take for granted were your biggest dreams and now it’s all coming true for you! I’m so thrilled for you! Enjoy your day with Jay and Happy Birthday Darling, here’s to your best year yet!’ 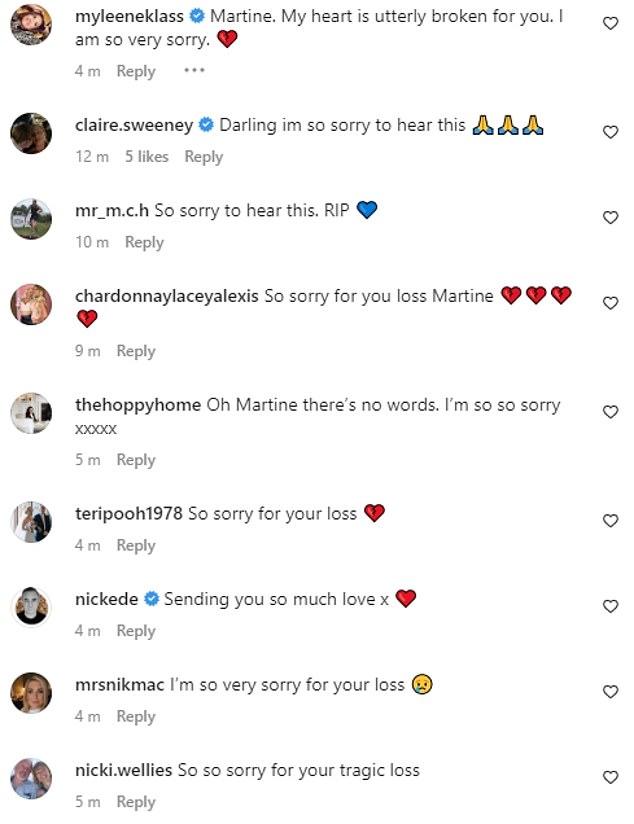 So sorry: A host of celebrities and followers took to the comments section to offer their condolences