Forget Carrie Bradshaw and co. Industry, the BBC’s new drama about graduates trying to succeed at a London investment bank, is sex and the City as you’ve never seen it before.

Viewers are shocked by its explicit sex scenes, full-frontal nudity and drug use.

By Maggie Alderson for the Daily Mail

We might live in a small town now but we are no unsophisticated provincial prudes, me and my husband.

We have lived in various global cities, drunk deep of the cup of life, watched a lot of French films. So why does the graphic sex in BBC Two’s Industry so appal us?

We are enjoying the series, following the progress and interactions of five ambitious — and interestingly damaged — graduate recruits at a London investment bank.

There are some great characters, including satisfyingly hateable bankers (insert rude word that rhymes) and bullies.

The acting is great and there’s just the right mix of wit and humour, with pertinent challenging issues. The dialogue is snappy. 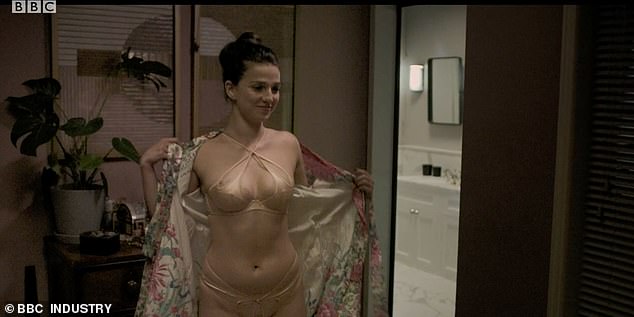 It’s the way it’s filmed that is so off-putting. Way too much information. Because the sex scenes in films and television that are most memorable are not explicit in this way

So you’re into all that — and then you find yourself watching one of the lead characters having full sex in a nightclub toilet with someone you’ve never seen before. My husband and I turned to each other with horrified expressions.

‘Can we fast-forward?’ asked my man of the world, a retired footballer. ‘I really don’t want to watch this.’

The problem is, it’s not just the suggestion of sex taking place — close-ups of faces, eyes closed, ecstatic moaning — it’s the full-length view, from a distance, with very unkind lighting. All the awkward limbs akimbo. It’s not sexy, it’s sordid.

And they are sprinkled through every episode, these proto-porno interfaces, each one smashing down the fourth wall like the lights coming on in a cinema in the middle of a film. It’s jarring.

We wondered if it’s our age — perhaps we just don’t ‘get it’ any more? So I asked my 18-year-old daughter to watch one episode and tell me what she thought, without giving any specific reasons why.

The problem is, it’s not just the suggestion of sex taking place — close-ups of faces, eyes closed, ecstatic moaning — it’s the full-length view, from a distance, with very unkind lighting

Her responses came via text, starting off positive: ‘This is great, I’m really interested in the City, some of my friends want to do that.’

Then the inevitable instant crush on one character: ‘I like the one who lives with the Etonian, he’s really hot.’ A pause and then this: ‘Oh yuck. Sex over FaceTime. I’m cringed.’

And her opinion didn’t improve with the subsequent sex scenes. ‘This is too real. It’s like accidentally walking in on people having sex at a party. Horrible.’ Then the comment which nailed it for me: ‘It’s unhygienic.’

Interestingly, her 20-year-old boyfriend felt the same. ‘Gross’, was his verdict.

So, if the BBC has embraced this practically hardcore level of screen sex to be down with the kids who love the edgier content of streaming services — the same daughter is mad about the gory American Horror Story on Netflix, which I definitely am too old to watch — this wasn’t the way to do it.

Adding to the oddness, they have scheduled it on BBC Two. I would have been much less surprised to have found such content online, on BBC Three.

Normal People (BBC Three, 2020): The most moving sexy sex I have ever seen on screen — because the connection between the characters is so intense (and they are so innocently beautiful and there was some very nice bed linen).

It does not matter what sex or sexuality you are — if that true burning fire is there on screen, it gets to you. Also, there’s nothing sexier than a cowboy, so two is better than one. Simples.

The up-close-and-dangerous dancing at a party in Steve McQueen’s brilliantly atmospheric film is Scotch-bonnet hot. The hands entwining behind the necks were so beautiful.

And it goes out just after 9pm — on a Tuesday, of all innocent nights — meaning that my late mum could very easily have seen this by just staying on the channel, after watching Celebrity Antiques Road Trip and Great British Menu, a thought I find deeply upsetting.

I’m sure it is an accurate portrayal of life for such young people — random sex and quite astonishingly copious drug-taking included — because the writers of the show, Konrad Kay and Mickey Down, were both Oxford graduate trainees at investment banks themselves.

So I don’t blame the scripts. It’s the way it’s filmed that is so off-putting. Way too much information.

Because the sex scenes in films and television that are most memorable are not explicit in this way. The excitement comes from the build-up, the increasing sexual tension between characters you are invested in, whose interactions you have closely followed, until that thrilling moment when their lips finally meet.

And it can be most powerful when no consummation is actually shown on screen — just implied.

That’s the great appeal of Regency dramas, all those hearts beating faster beneath Empire lines and choking cravats, while making clipped small talk. How very disappointing it would be to see Mr Darcy and Elizabeth Bennet actually at it. Horrible.

If more is shared than the first kiss, screen sex is most affecting when a lot is still left to the imagination.

Because that is where good sex happens in reality, simultaneously in our bodies and in our heads, so we experience the sensations without having to witness the specific physical interplay that makes them happen.

But I will carry on watching. I want to know what happens.

I will just keep the remote handy for fast-forwarding.

Sex in a nightclub toilet, full-frontal male nudity and a lesbian assault in a taxi — and that was just episode one.

When it came to this series, set in the world of graduates making their way in high finance, I think the only thing we didn’t see was spanking. Blimey! 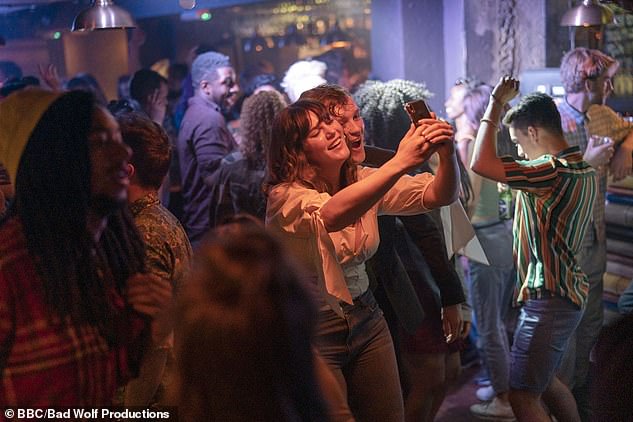 Even the less attractive characters in this series simply ooze confidence from every shiny pore. And it’s the women who are the revelation: predatory, direct, ambitious. True, they confuse owning a smart phone with having a personality but, hell, why wasn’t I more entitled?

The year was 1976, and it was aired on LWT, of course, as in those days the BBC only ventured as far as Irene’s chaste love for Soames in The Forsyte Saga.

For a glimpse of a young male body, I had to sneak into the Odeon to see Enter The Dragon, certificate 18, and behold Bruce Lee’s bare torso.

No wonder sex remained a mystery, terrifying and off-limits, meaning I remained a virgin until I was 32. Oh, how I would gorge on Industry were I a 20-something today.

Young people, despite Covid, their imprisonment on campus, debt, unemployment and no prospect of ever buying a house, have never had it so good!

Even the less attractive characters in this series simply ooze confidence from every shiny pore.

And it’s the women who are the revelation: predatory, direct, ambitious. True, they confuse owning a smart phone with having a personality but, hell, why wasn’t I more entitled?

Butch Cassidy And The Sundance Kid (1969): This scene almost made me switch from Team Paul Newman to Team Robert Redford who, as Sundance, makes Katharine Ross strip at gunpoint: he parts her camisole with his gun.

The English Patient (1996): So tough to choose a scene. Kristin Scott Thomas as Katharine and Ralph Fiennes as Almasy getting steamy in the bath, or having clothed sex?

Or Naveen Andrews as Kip, washing his hair before getting into bed with Juliette Binoche? Hmmm. I must watch it again…

In my day, women could only succeed in a male-dominated workplace if we were the first to arrive and the last to leave, and never complained, cried or challenged the patriarchy. Well, not any more!

These girls ask men out, and demand positions in bed and on the board, pay rises and orgasms in equal measure.

But is all this prime-time bonking actually sexy? Yes, and it’s funny, too.

I admit I was a little shocked, 11 minutes into episode one, when Harper — our young, black, female protagonist — bares her erect nipples to a man watching her on FaceTime.

There’s no romance, no waiting for him to ask her out. They just get on with it.

Parents should also watch this drama, as they’d realise their brittle teen is like creme brulee: soft underneath. Meanwhile, the older characters — including a predatory lesbian played by Sarah Parish — make me wonder: do young people really see us like this?

Not as mentors, but as sad has-beens who still talk on the phone with a, you know, voice. There’s no deference. But maybe we don’t deserve it.

Of course, the dialogue is clunky, the acting a little Grange Hill. But I prefer Industry to Normal People, which pretended to be art but baulked at the more controversial aspects of the book. Here, women rule the roost.

Would I want my teenage daughter, if I had one (and I might have had one, had I not been so terrified of men), watching it? Yes, yes, yes!

She’d learn her sexuality is nothing to be afraid of. That men are not an unknowable species. Forget #MeToo. This is #MeFirst.

Industry is a co-production with HBO, which gave us Sex And The City; the C-word, so shocking back then, is now as commonplace as Uber and Deliveroo. The young women here are Samantha Jones’s grandchildren, high-flying on her fabulous coat tails.

Again, yes, yes, yes! This isn’t about chasing viewers. Young people need an outlet, especially now many can no longer go into the office, let alone bars. Sex for them is as vital as breathing, or food.

Think of Industry as PPE for the soul. It’s probably the only thing keeping the lid on the virus among the under-25s. Boris should give whoever commissioned it a knighthood.