The new couple has not shied away from cameras when it comes to public displays of affection.

And it seems that rapper Machine Gun Kelly and his girlfriend, Megan Fox, are still going strong as a pair.

On Tuesday night, the musician made several posts to his Instagram Story from what appeared to be a wild night out with the movie star and his pals as they all posed together for multiple photos. 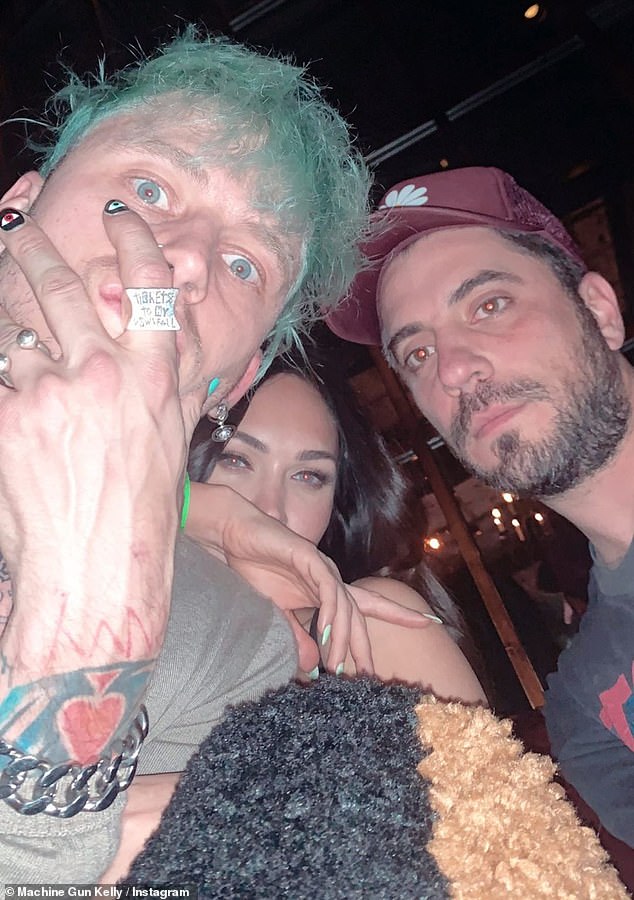 Wild night: On Tuesday evening, Machine Gun Kelly shared a selfie he had taken with his girlfriend Megan Fox during their shared trip to Las Vegas

In one of Kelly’s posts, he could be seen partially covering his face while his 34-year-old girlfriend stood behind him while doing the same.

The performer’s bright green hair stood out from the neutral gray tone of his shirt, and he also prominently wore a ring featuring the title of his latest album, Tickets To My Downfall.

In another selfie, the 30-year-old rapper was pictured flashing a sign of the horns while he was surrounded by a group of friends who had been partying with him during the wild night out.

Kelly made a point of tagging that he had been cutting loose at the Red Rock Casino Resort & Spa, located just outside of Las Vegas, during his getaway. 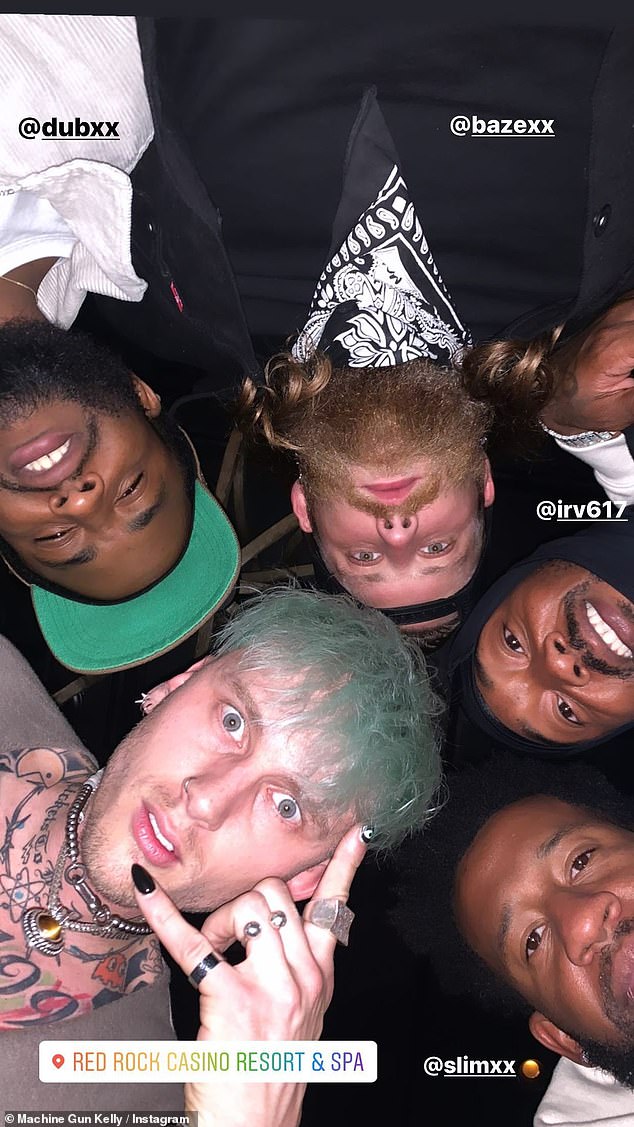 Better with friends: The rapper also posted a photo showing him being surrounded by a group of pals that had been partying with him during the night out

Prior to sharing the selfie, the musician shared a video that had been taken in a mirror as he tried on a lime green shirt with an unusually fitting hood.

He wore the article of clothing underneath a black zip-up jacket with multiple dark patches placed across its front and sleeves and gave a funny face to the camera before the video’s end.

The singer’s previously dyed hair had been bleached blonde for the shot, and he gave his fans a closer look at his new color in a selfie shared to his account later in the evening.

Kelly remained topless for the photo and gave his 7.9 million followers a closer look at the tattoos he had on the upper portion of his chest and lower neck.

In the snap, the rapper made a point of expressing that he was the ‘blonde don.’ 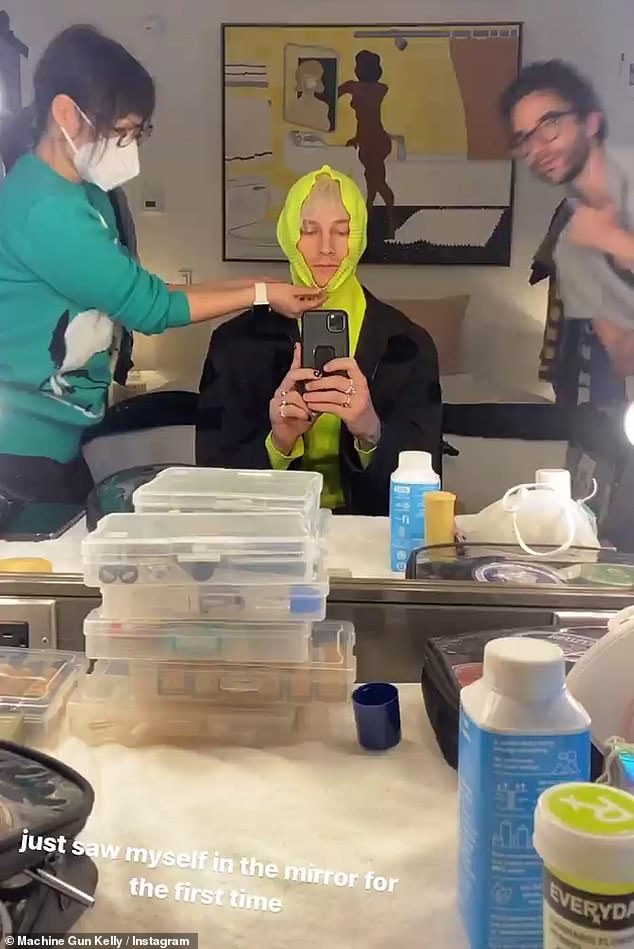 Interesting choice: Prior to posting the group selfies, Kelly took a video of himself trying on a lime green hoodie with an unusual upper portion 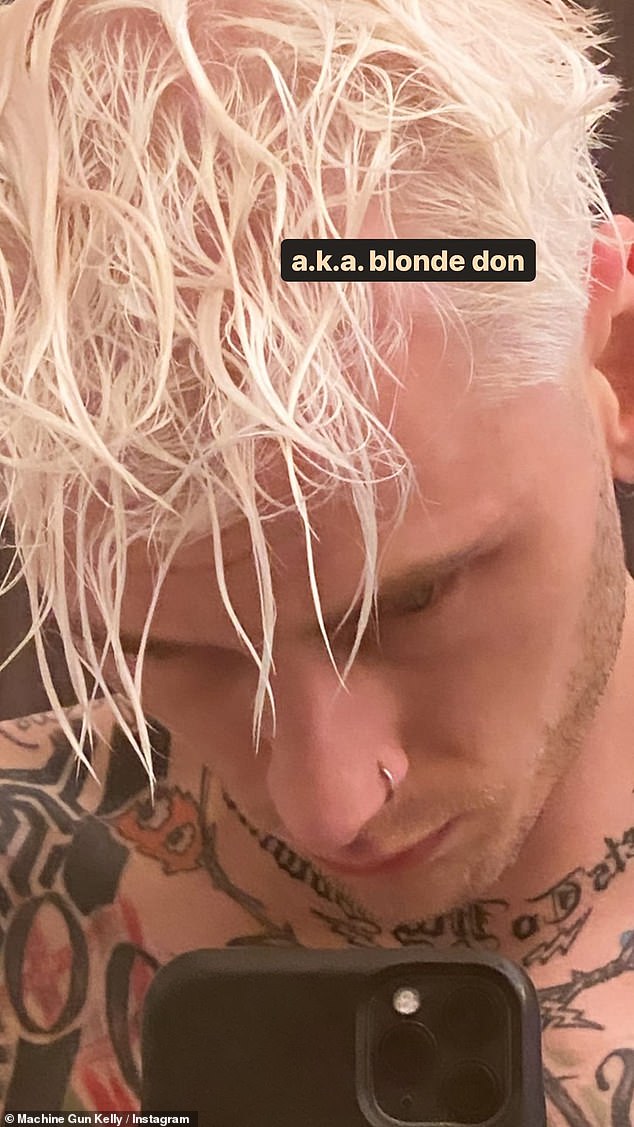 Changing things up: Although his mint green hair was prominently featured in two of his photos, the singer also shared a few snaps to show that he had returned his locks to their previous blonde shade

Kelly and Fox have been in Las Vegas since Sunday, when they attended the highly-anticipated UFC 260 event, which took place last Saturday night.

Also present at the match were Travis Barker and Kourtney Kardashian, whom the rapper and his new girlfriend were on a double date with.

During the event, the Transformers actress stayed comfortable underneath a dual-tone longline coat while spending time with her new beau.

The rapper kept it casual as he wore a long-sleeve t-shirt that featured a deep neck that placed many of his impressive tattoos on full display.

Kelly and Fox began dating last May after meeting on the set of the upcoming crime thriller film Midnight in the Switchgrass. 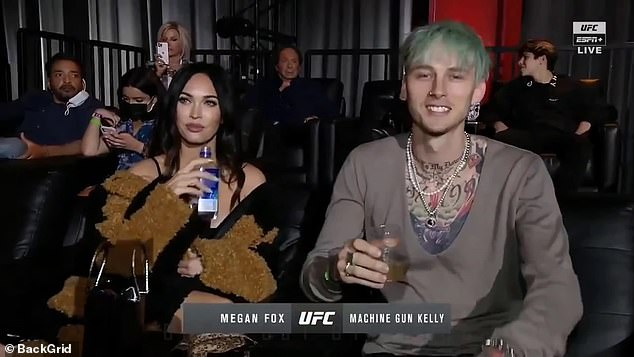 Prior to becoming beginning a relationship with the musician, the Teenage Mutant Ninja Turtles actress was married to Beverly Hills, 90210 star Brian Austin Green.

The former couple became engaged in 2006 and welcomed three children together after tying the knot four years after Green first popped the question.

Fox separated from her estranged husband not long after meeting the musician and filed for divorce in November of last year.

That same month, she spoke to Nylon and told the publication about what she felt after meeting her now-boyfriend for the first time.

‘I looked into his eyes [and] I felt the most pristine, most gentle, most pure spirit. My heart shattered immediately,’ she recalled. 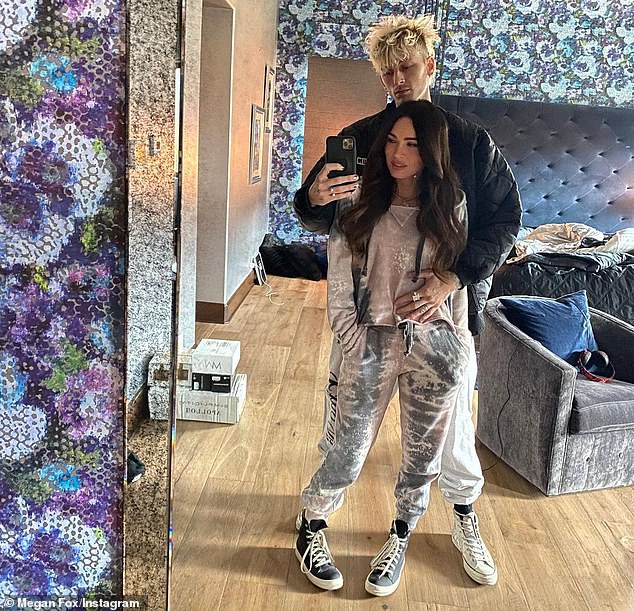 Feeling good: Last November, Fox spoke to Nylon and described her new boyfriend as the ‘most pristine, most gentle, most pure spirit’