If you can’t have the UK version… have Down Under’s! Love Island Australia cast boasts a rugby star, a fierce animal handler and an ex-beauty queen after British series was cancelled by COVID-19

Love Island Australia is coming to the UK this summer to fill a void for devastated fans after the British series was cancelled by COVID-19.

And ahead of its launch in blighty on Monday 15th June, the first 10 islanders to enter the famous villa have been revealed.

Among them are a hunky footballer, a naughty nurse, a feisty animal handler and a former beauty queen, all on a mission to find love in the famous Mallorcan villa.

It’s here! Love Island fans have been given their first glimpe at the Australian lineup ahead of its launch in the UK, after the British series was postponed due to the coronavirus

Leading the lineup is Sydney based animal handler Millie, who describes herself as ‘the star of everyone’s Snapchat Stories.’

The brunette beauty, 24, says that as a women who fears commitment she’s hoping to find a man she can stick with in the villa, adding: ‘I can convinced to do just about anything for a laugh. I haven’t found my limit yet.’

Joining her is barmaid Cassidy, 23, from Melbourne, who describes herself as ‘a country girl at heart’ and admits she can be socially awkward around those she’s just met, but hopes to end an eight-month dry spell without a man. 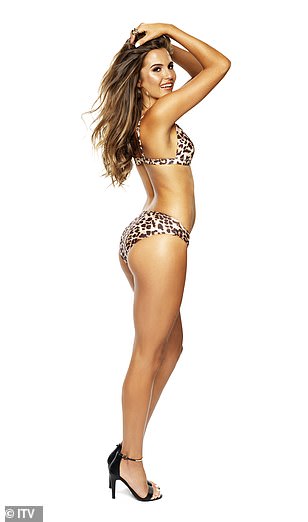 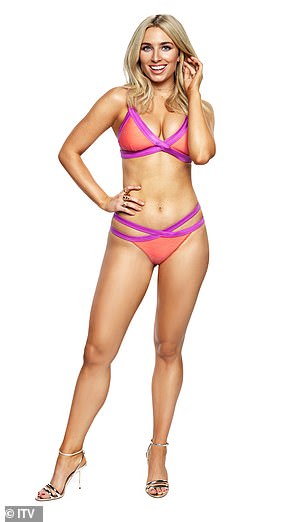 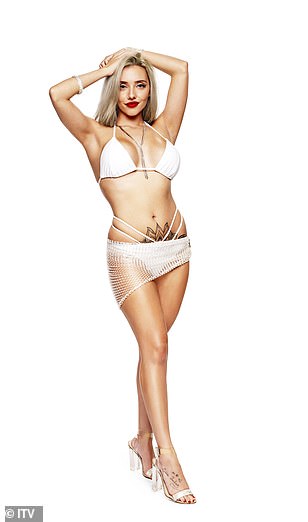 Meanwhile nurse Erin, also 23 and from Melbourne, has been single for nine months after her three-year relationship came to an end, but fears she’ll just want to kiss every single man who catches her eye.

She says: ‘I just want to find love and I bet I don’t as all the guys will be so hot. I’ll just want to make out with every single one of them.’

Natasha, 24, is a bombshell beautician from Perth, who admits that in recent months she’s been on a date ‘every single night,’ but is yet to find The One.

She’s on the lookout for tall, tanned man with big muscles, with a boat as an added bonus. 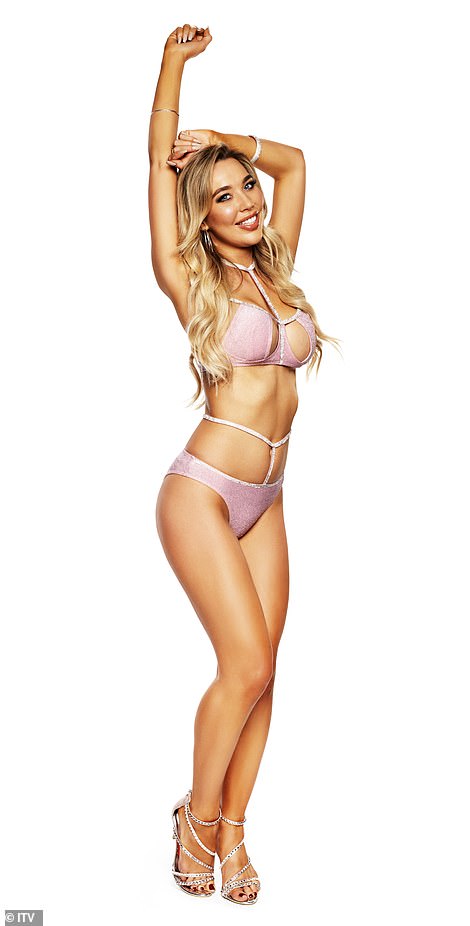 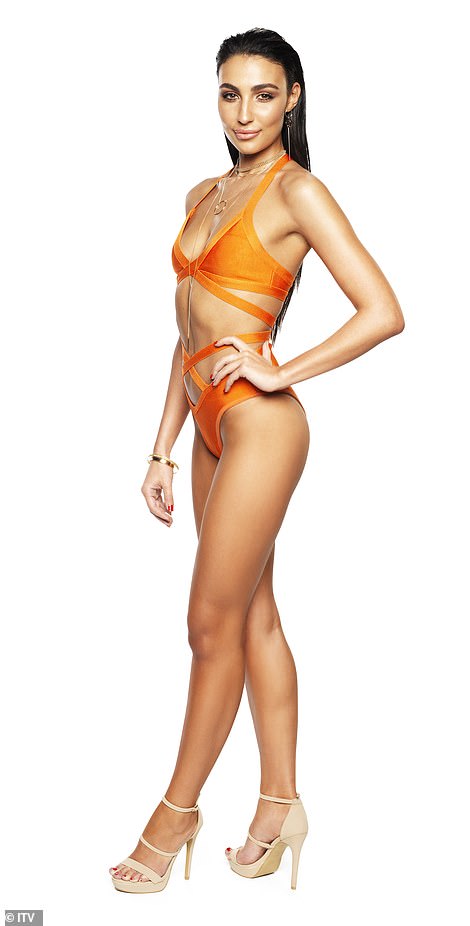 Jaw-dropping: Natasha, 24, is a beautician from Perth, who admits she’s been on a date ‘every single night,’ while Tayla, 21, represented her home state of Western Australia in Miss Universe 2015.

Rounding out the girls is former beauty queen Tayla, 21, who represented her home state of Western Australia in Miss Universe 2015.

She’s on the hunt for a man with blonde hair and blue eyes, but adds that she can be ‘hard to handle’ after losing part of herself in her last relationship.

Over on the boys side, leading the pack is model Justin, 27, from Melbourne, who has been single for two years.

He admits that juggling modelling with working as a concreter for his dad’s business means he boasts a good balance of ‘masculinity and femininity,’ and wants to find an elegant woman that he could marry within the next five years.

Elsewhere Aussie footballer Charlie, 27, from Sydney, insists he’s as far from ‘the one night stand guy’ as you can get, and wants to find that dream girl he can take home to his mum after being single for a year and a half.

Eden, 25, from Sydney, isn’t a man to mess with having worked as a prison guard, and is quick to insist he ‘doesn’t care if he’s labelled as the bad guy.’ 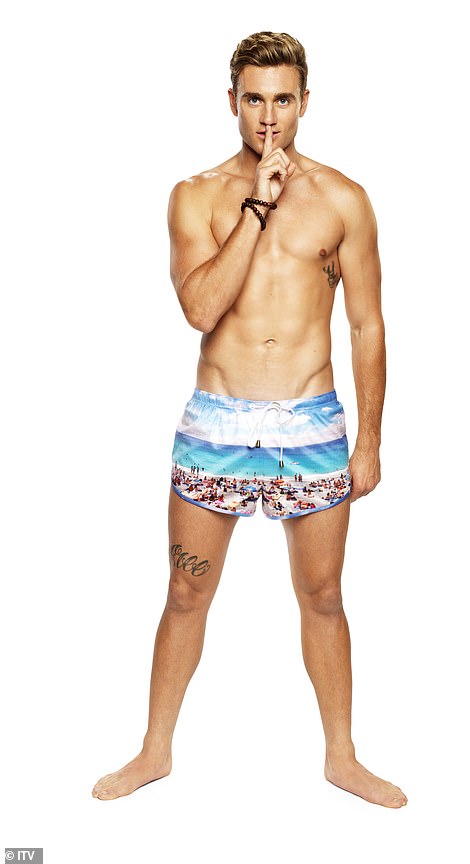 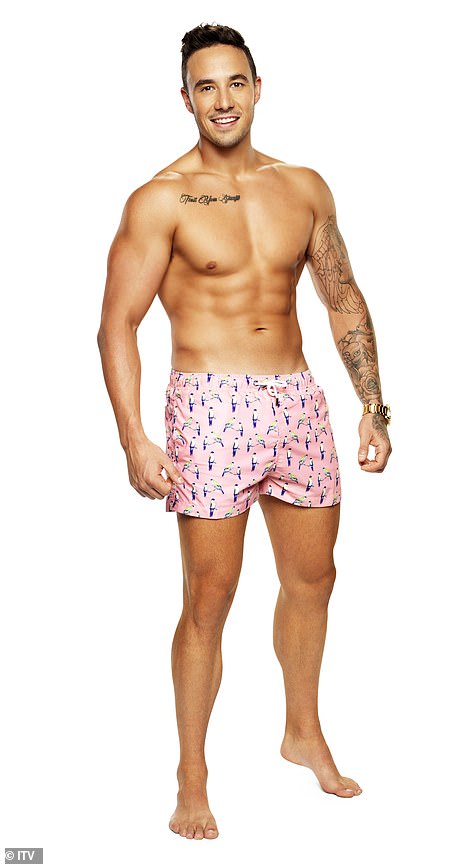 Tanned and handsome: Sports administrator Josh, 25 from Sydney, admits he suffers from the genetic condition known as ‘the wandering eye,’ (left) while tradesman (or tradie) Grant, 22, completes the lineup

He insists his type ‘must have big boobs, big booty, all round good body,’ and is determined to find a girl who matches his incredibly high standards.

Sports administrator Josh, 25 from Sydney, admits he suffers from the genetic condition known as ‘the wandering eye,’ and is heading to the villa to meet as many beautiful girls as he can.

Completing the lineup is tradesman (or tradie) Grant, 22, from Canberra, who despite still living at home is already on the lookout for his future wife, and would love to find a sports-loving girl who is open to ‘enjoying life in general.’ 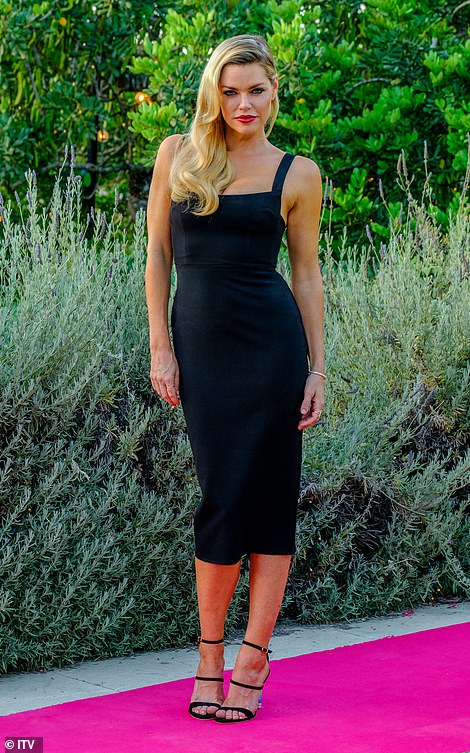 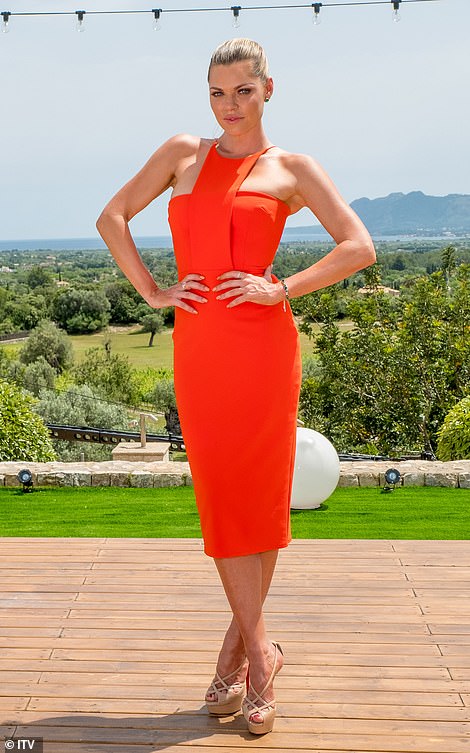 Stunning: Love Island Australia will be hosted by actress and singer Sophie Monk, and just like the UK series, takes place on the island of Mallorca

Love Island Australia will be hosted by actress and singer Sophie Monk, and just like the UK series, takes place on the stunning island of Mallorca.

Speaking ahead of the new series about what this year’s islanders will take away from the new series, she says: ‘I think because being in Love Island will be so consuming, they will be in the bubble where nothing else matters and everything is about love and hooking up, so they will learn so much about themselves in such a quick amount of time.’

‘Just be yourself and genuine… and just enjoy finding love in such a beautiful environment and have a Spanish adventure of a lifetime.’ 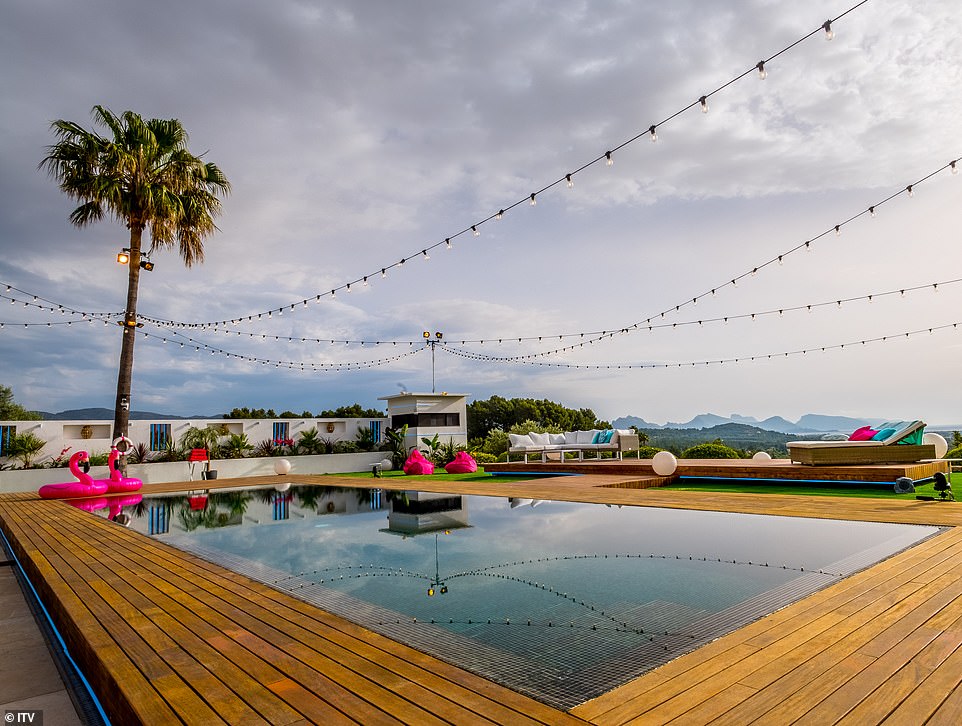 Summer of love: As ever the famous Love Island villa is the perfect place for the sexy singletons to find love, complete with a sprawling pool under the Spanish skies 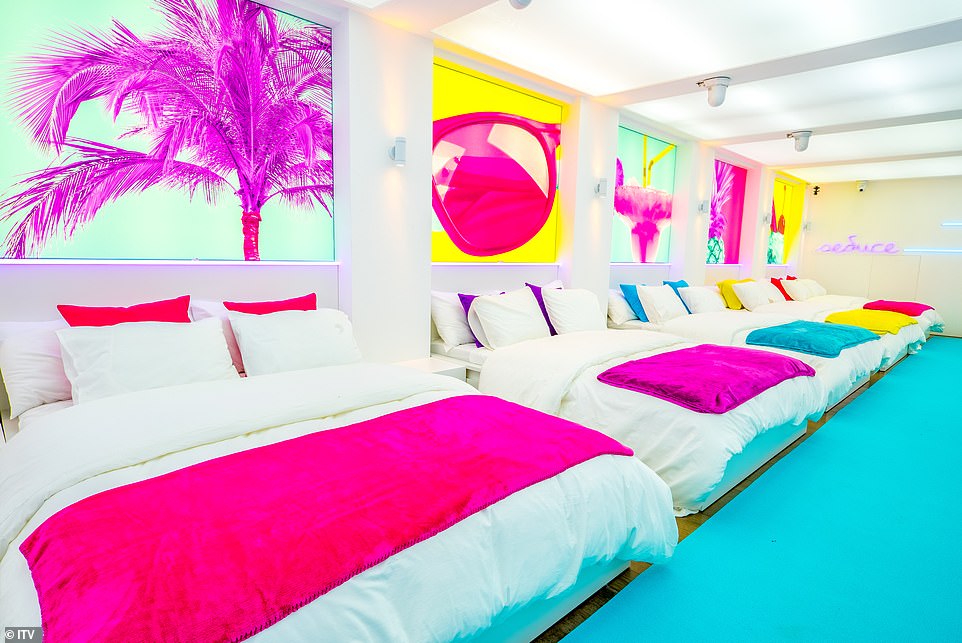 Colourful: The neon bedroom is the ideal place for couples to get cosy (or not!) as they hoop to find love and scoop the prize money of AUS$50,000

The series will also be narrated by Irish presenter Eoghan McDermot, hoping to offer some comedic overlays to the show ala the Brits beloved Iain Stirling.

In May, ITV pulled the plug on Love Island UK, revealing it was a logistical impossibility to safeguard ‘the wellbeing of everyone involved’ amid the ongoing global coronavirus pandemic.

Fans have been assured the dating programme, which was due to begin filming in June, will be back ‘stronger than ever in 2021’. 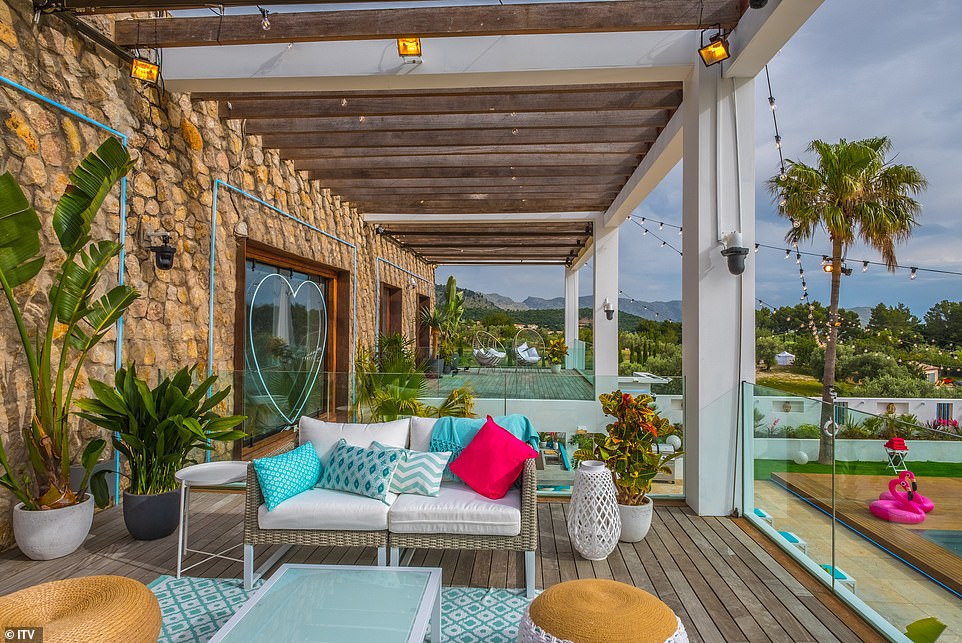 Playful: The series will also be narrated by Irish presenter Eoghan McDermot, hoping to offer some comedic overlays to the show ala the Brits beloved Iain Stirling (terrace pictured) 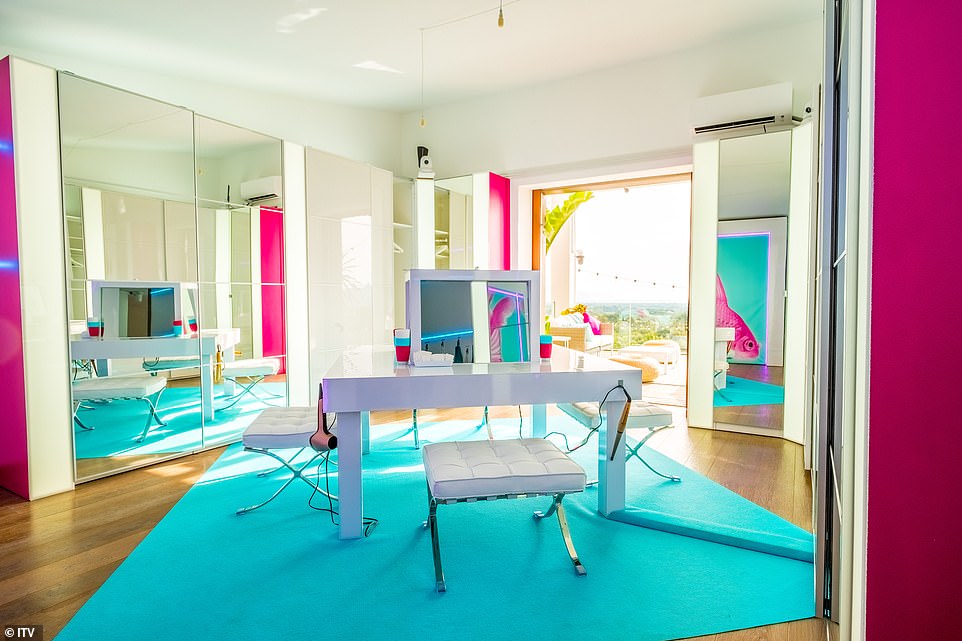 Tragic news: In May, ITV pulled the plug on Love Island UK, revealing it was a logistical impossibility to safeguard ‘the wellbeing of everyone involved’ amid the ongoing global coronavirus pandemic (dressing room pictured)

Kevin Lygo, Director of Television at ITV, said: ‘We have tried every which way to make Love Island this summer but logistically it’s just not possible to produce it in a way that safeguards the wellbeing of everyone involved and that for us is the priority.

‘In normal circumstances we would be preparing very soon to travel out to the location in Mallorca to get the villa ready but clearly that’s now out of the question.

‘We are very sorry for fans of the show but making it safely is our prime concern and Love Island will be back stronger than ever in 2021. In the meantime Love Island fans can still enjoy all six series of Love Island on BritBox.’ 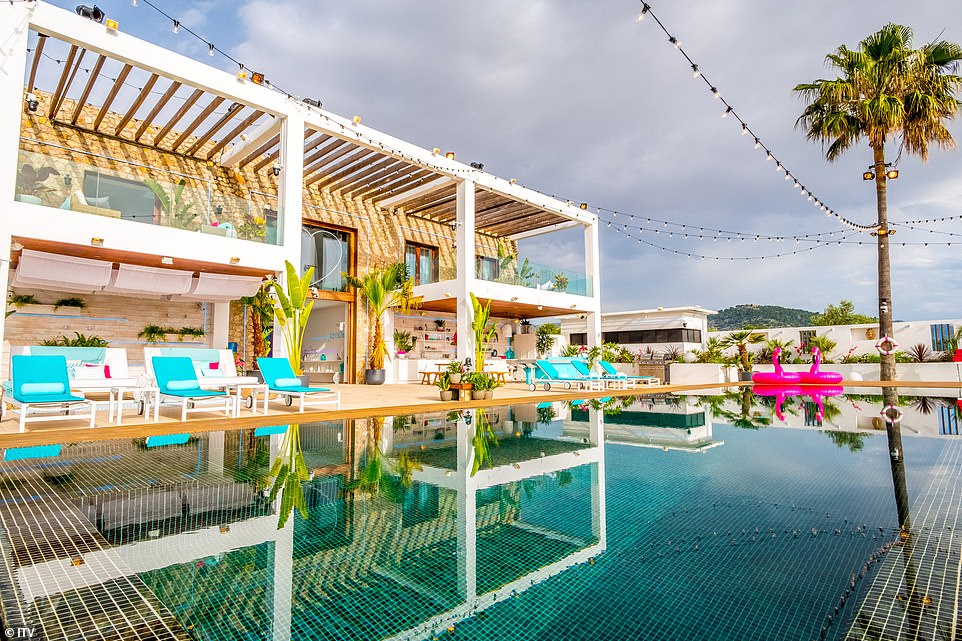 Pushed back: TV insiders have claimed the work that has already been done towards the cancelled series – including casting – will be deferred until the winter 2021 series (pool pictured) 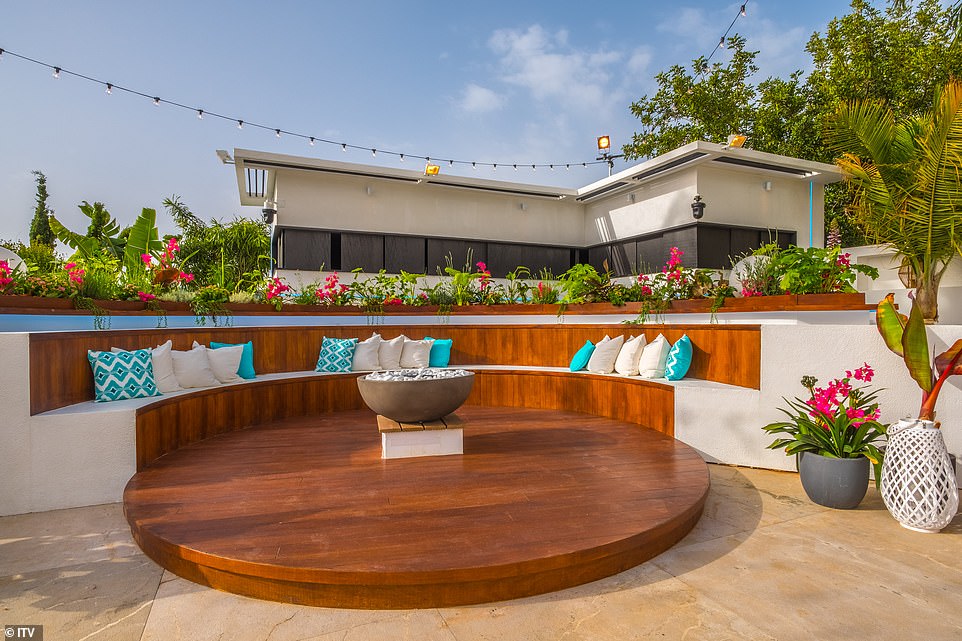 Starting soon: Love Island Australia will begin in the UK on Monday 15th June on ITV2

Host Laura Whitmore weighed in on the cancellation, saying it was the right decision.

She tweeted: ‘Like with a lot of things because of restrictions with travel, social distancing and unable to plan ahead, Love Island is postponed until 2021.

‘Great news is that there have been more applications then any other series! Next year is going to be BIG. Stay safe.’

TV insiders have claimed the work that has already been done towards the cancelled series – including casting – will be deferred until the winter 2021 series.

A source told The Sun: ‘A huge amount of work had already gone into this series in terms of laying out plans for the show. Casting had also started, with interviews on Zoom for new applicants planned to begin this week.

‘Rising stars on social media had also been tapped up by producers, who were already picking out their favourites.’

Love Island Australia will begin in the UK on Monday 15th June on ITV2. 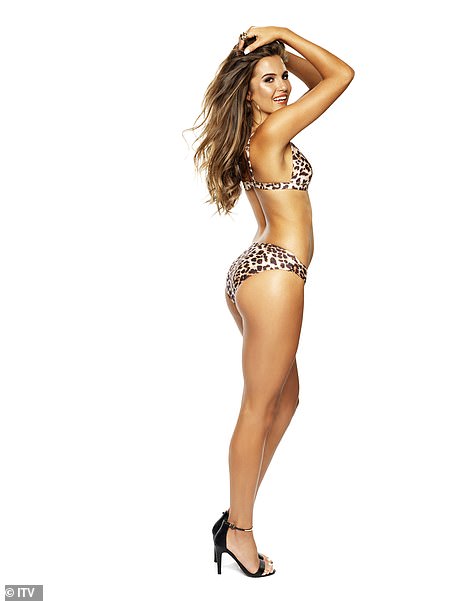 Where is she from? Sydney, NW

What does she do? Animal Handler

Her type? Someone who can make her laugh, can understand her sense of humour and is sexy and passionate 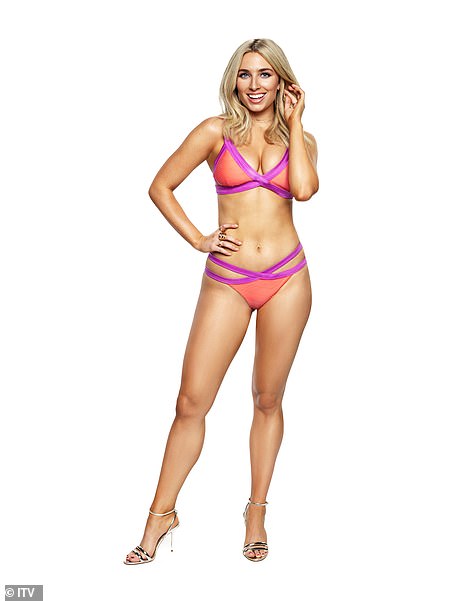 Where is she from? Melbourne, VIC

What does she do? Barmaid

Her type? A tattooed guy who is laid-back, sport, kind and loves the outdoors, with the surfer look and old-school manners 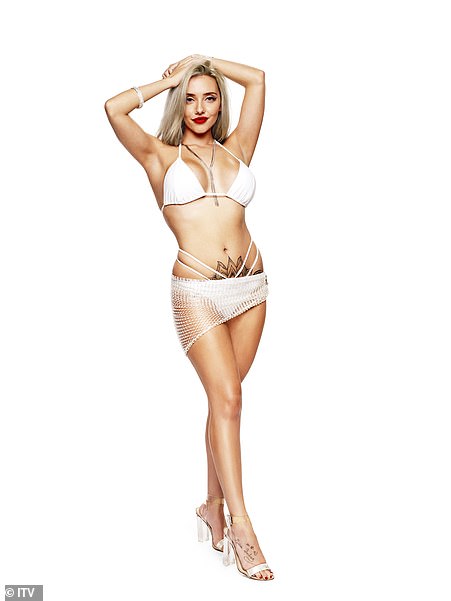 Where is she from? Melbourne, VIC

What does she do? Nurse 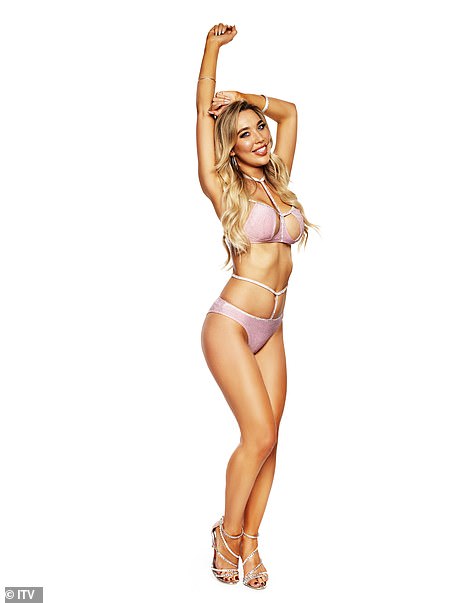 Where is she from? Perth, WA

What does she do? Beautician

Her type? A tall tanned man with big muscles, goals… and a boat 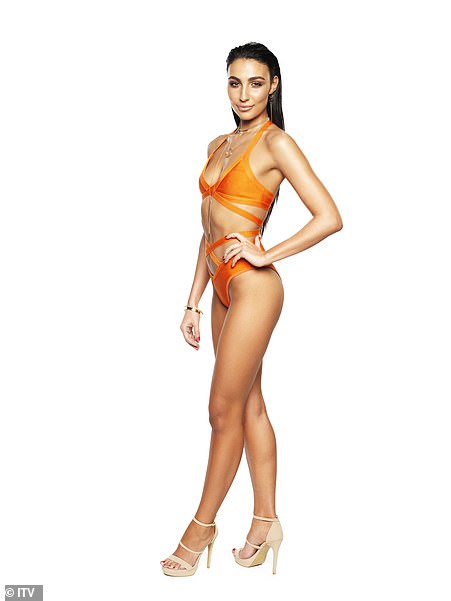 Where is she from? Perth, WA

What does she do? Beauty Queen

Her type? Tall man with blue eyes and blonde hair, who isn’t clingy, but is driven and family orientated 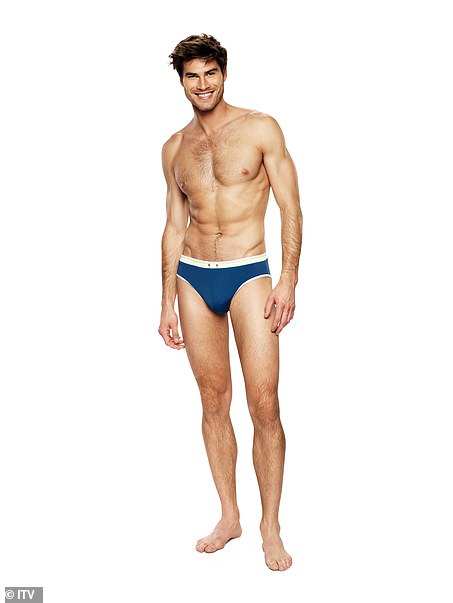 Where is he from? Melbourne, VIC

What does he do? International model/concreter

His type? An elegant woman who is fit, motivated, funny, loyal and beautiful 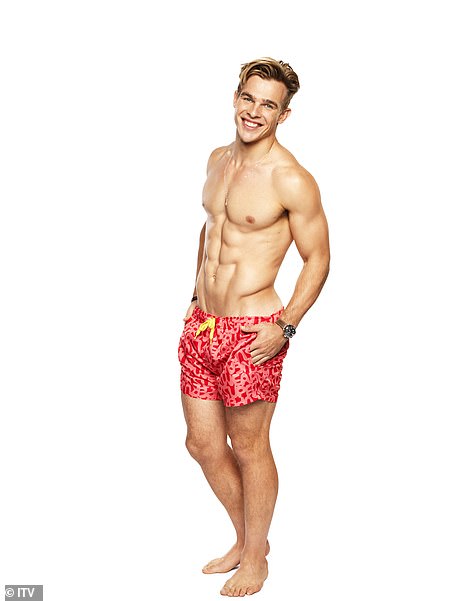 What does he do? Australia football (rugby) player

His type? A girl over 5ft tall that he can take home to his mum, who is athletic, will laugh at his jokes and has blue or green eyes 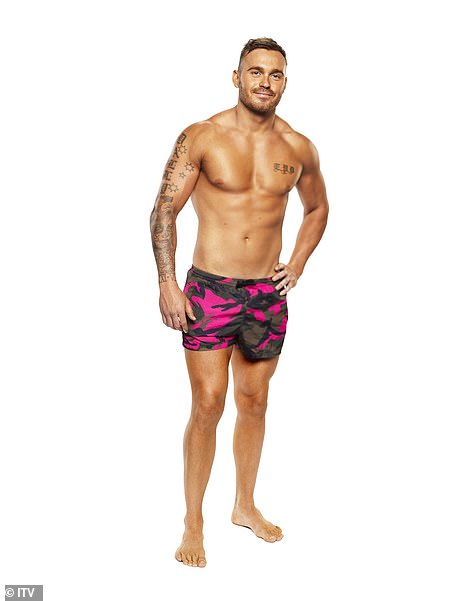 What does he do? Prison Guard

His type? A girl with a wild personality, a risk taker with ‘big boobs, big booty and all around good body’ 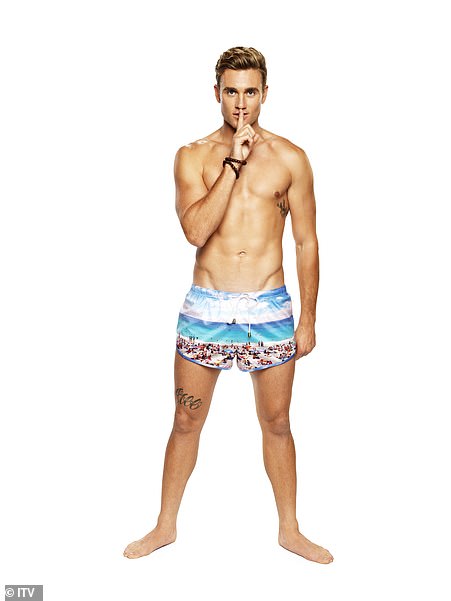 What does he do? Sports administrator

His type? A girl with blue or green eyes, any age, who is fit and good-looking 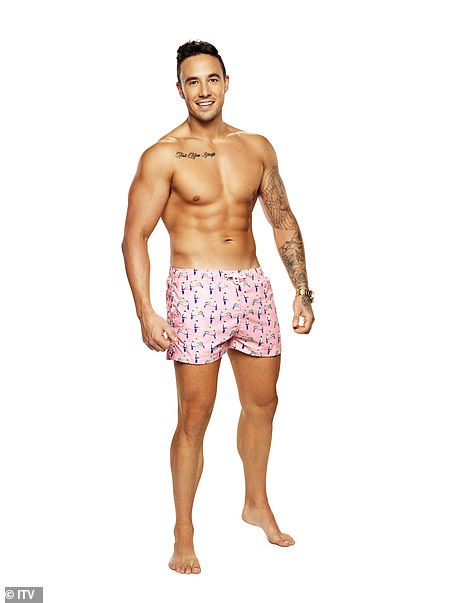 Where is he from? Canberra, ACT

What does he do? Tradesman

His type? Someone who is confident, tanned, loves the outdoors, sports and going to the gym