Lily James put on a show-stopping display as she kicked off the end of Pam & Tommy on Tuesday.

The actress, 32, who plays Pamela Anderson in the Hulu series, put on a busty display in a sexy gold choker dress at a screening for the finale in Los Angeles.

Lily appears opposite Sebastian Stan, who plays rock star Tommy Lee, in the series, which follows the theft of the couple’s sex tape from the safe in their basement of their Malibu home in 1995. 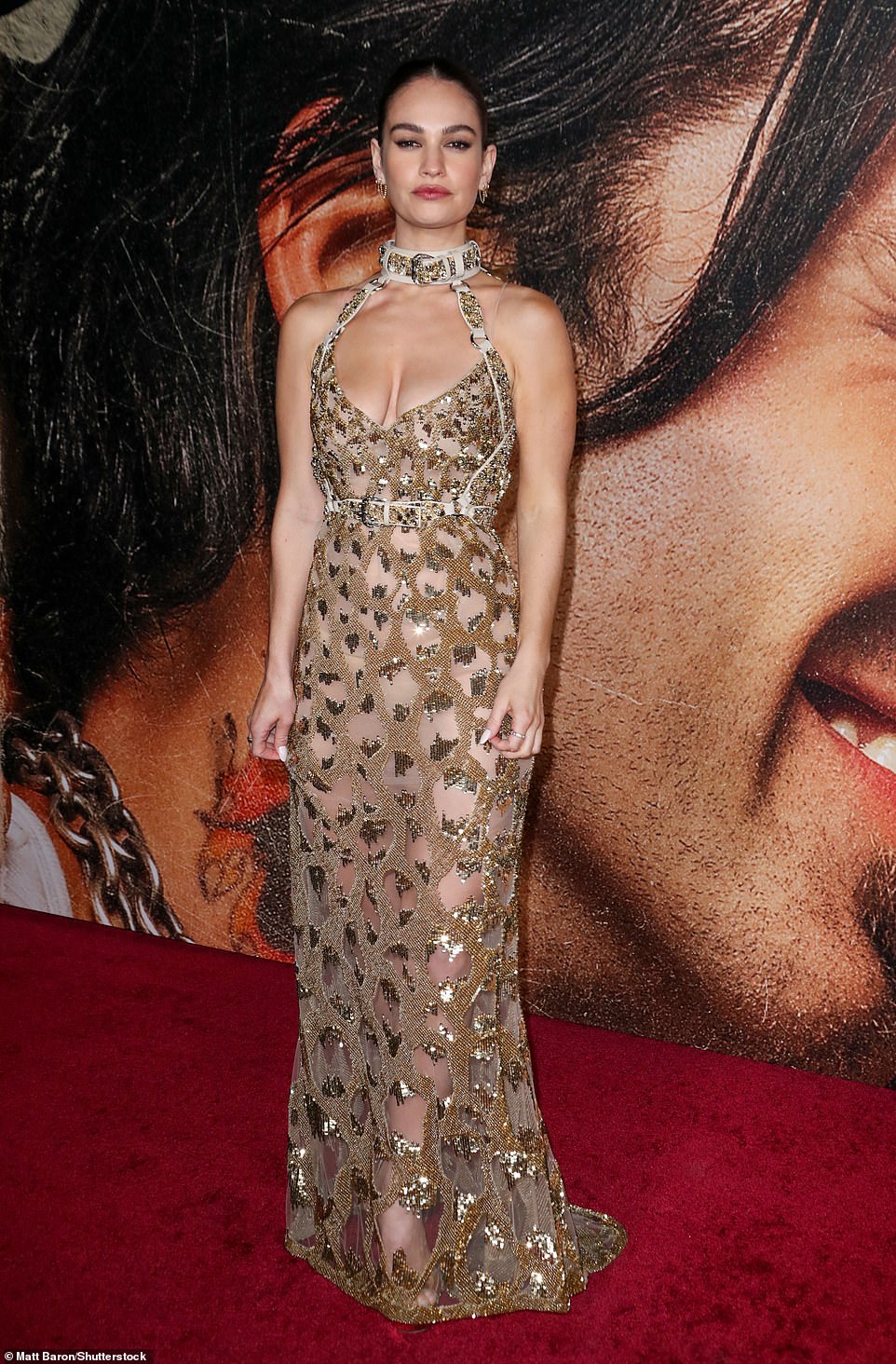 Going for the gold! Lily James who plays Pamela Anderson in the Hulu series, put on a busty display in a show-stopping gold choker dress at a screening for the finale in Los Angeles on Tuesday

Lily looked stunning posing up a storm in her dress with deep V-neckline and sheer skirt.

The plunging dress belted at the waist, accenting her trim and narrow torso.

From the neck to the hem, the dress was dripping in gold details.

The skirt and top was adorned in metallic touches, while the neck and straps appeared to be decorated with gold sequins.

Simply stunning: The plunging dress belted at the waist, accenting her trim and narrow torso 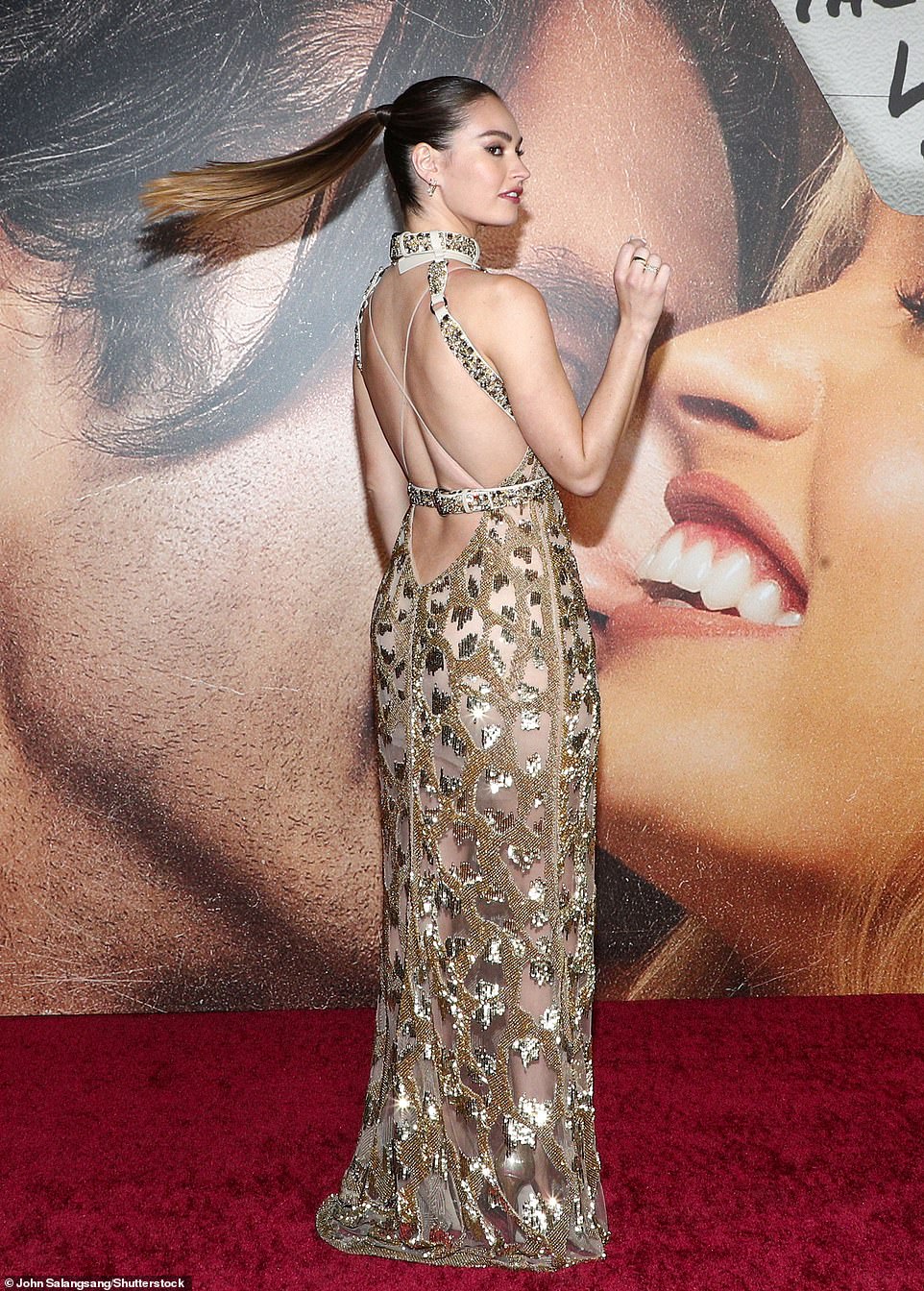 Best tressed! James whipped her high ponytail about as she flashed her back towards the camera

The glam factor: James wowed with eye makeup bringing out her eyes and red lipstick

Ramping up the sex appeal, the dress also put her toned back on full display.

She looked stunning with her hair slicked back into a high ponytail and her lips touched up with a berry red tint.

Lily also posed with her dashing co-star Sebastian Stan, who smoldered in a pink velvet suit and blush shirt.

The handsome celeb rocked a five o’clock shadow across his defined chin and a gelled hairstyle. 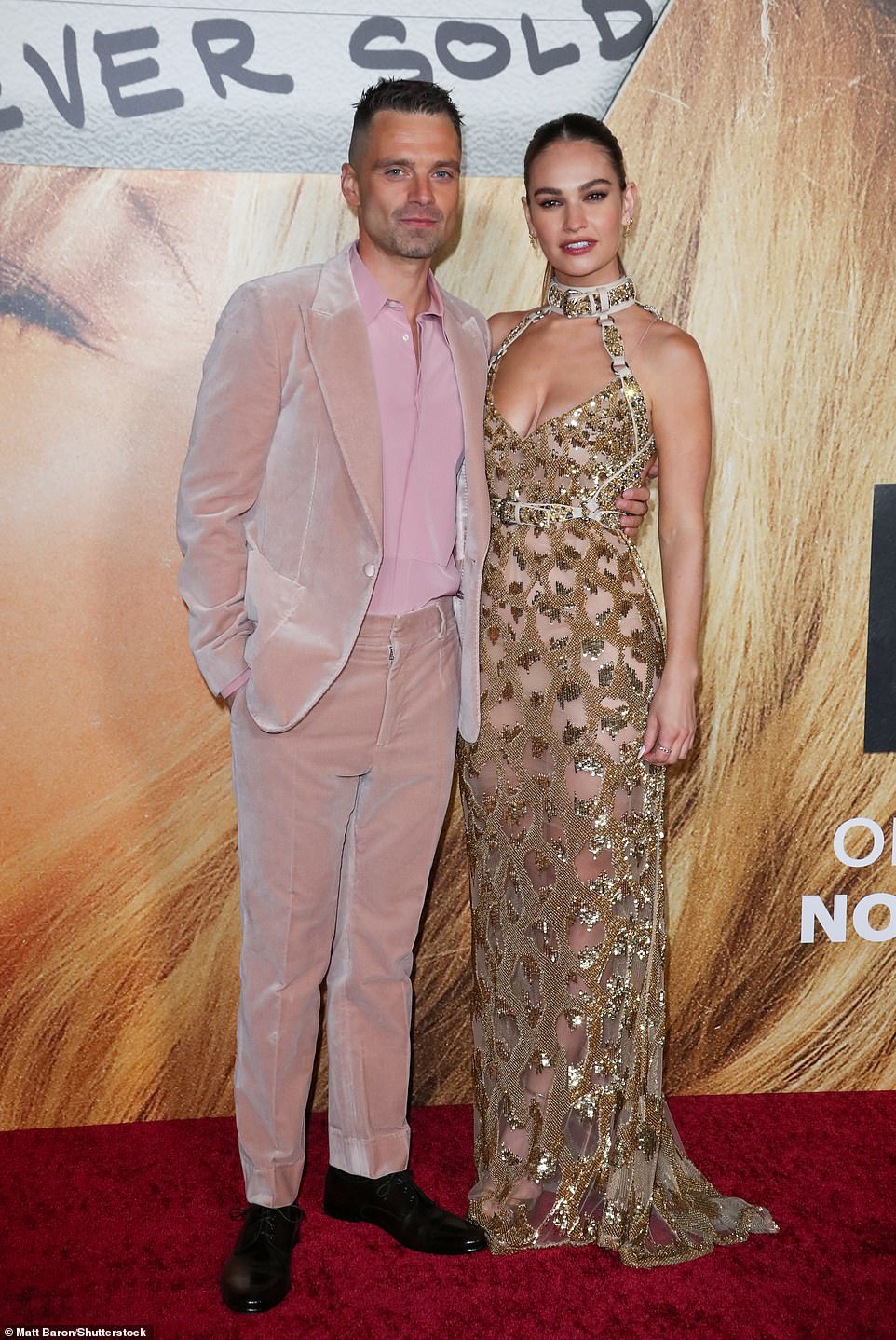 Co-stars! James was joined on the red carpet by her co-star Sebastian Stan, who plays her on-screen husband Tommy Lee 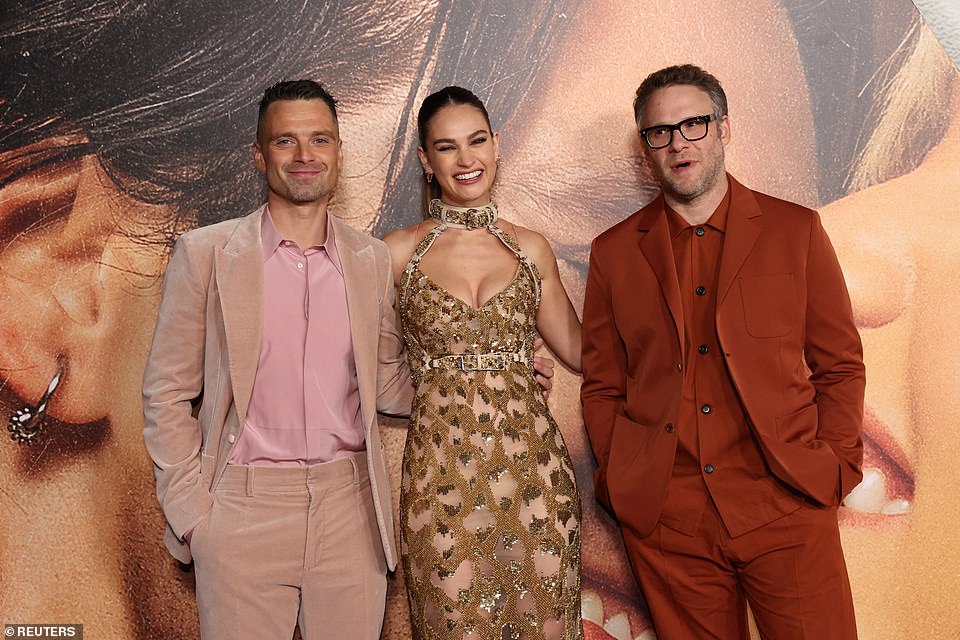 Cast of characters: The two were joined by their co-star Seth Rogen, who plays Rand, the man who steals their sex tape

Seth Rogen was looking smart and sharp in a red-orange suit and black glasses.

The season finale will air on Hulu on March 9, wrapping up the dramatic story which saw Pam and Tommy’s sex tape stolen from their private safe and distributed to the public by disgruntled former employee Rande.

Episode seven of Pam & Tommy saw the actress big dreams of movie stardom continue to crumble, as the couple lost a legal battle over the distribution of their sex tape.

In dramatic scenes the actress furiously lashed out at the ruling by insisting she’s being viewed as ‘a s**t with no rights,’ thanks to her previous racy roles, having been grilled by journalists and late-night hosts alike about the ‘devastating’ theft. 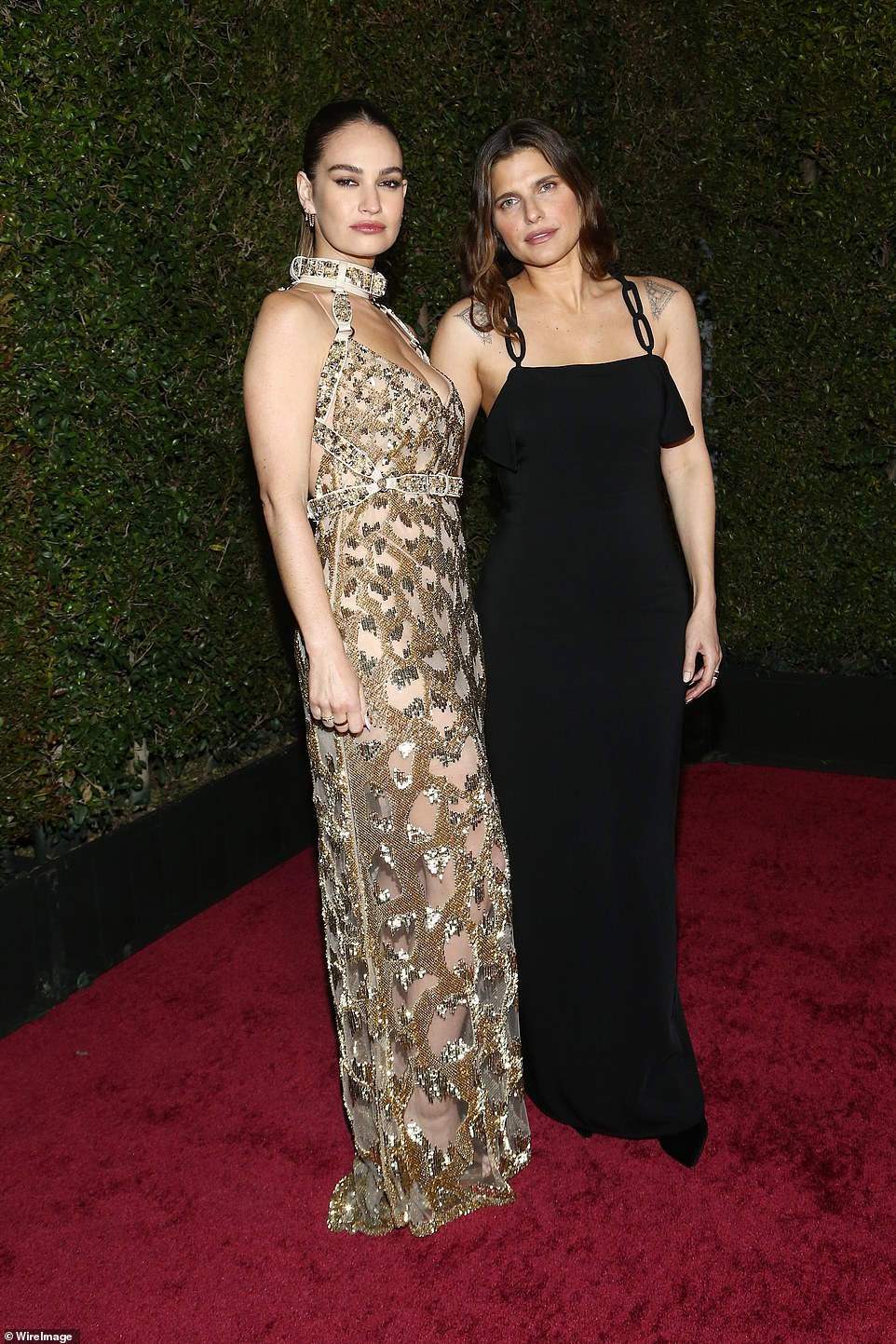 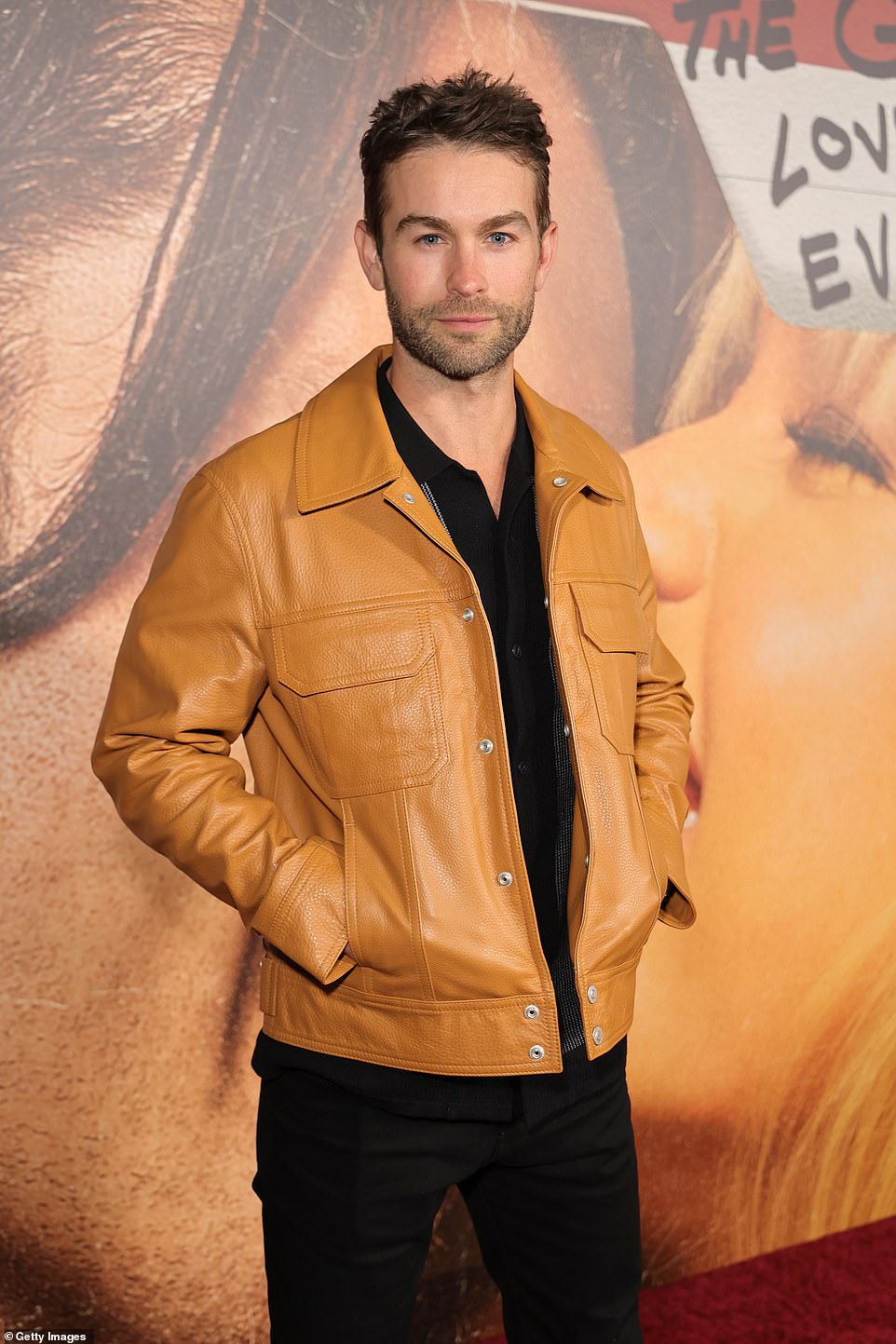 Elsewhere, having finally lost grip on the tape thanks to its vast spread by bootleggers, Rande is forced to do the dirty work of gangster Louis ‘Butchie’ Peraino to pay back his debt, after Miltie fled to Europe with a vst sum of their earnings months earlier.

Lily admitted last month she didn’t think she could ‘pull off’ playing Pamela Anderson in the new series Pam & Tommy.

The actress said she was ready for a ‘transformational’ role and said she felt the pressure to do ‘justice’ to Pamela, whose sex tape scandal with ex-husband Tommy Lee is the focal point of the series.

Stunning: Daisy Edgar-Jones and Natasha Lyonne put on a stylish display on the red carpet 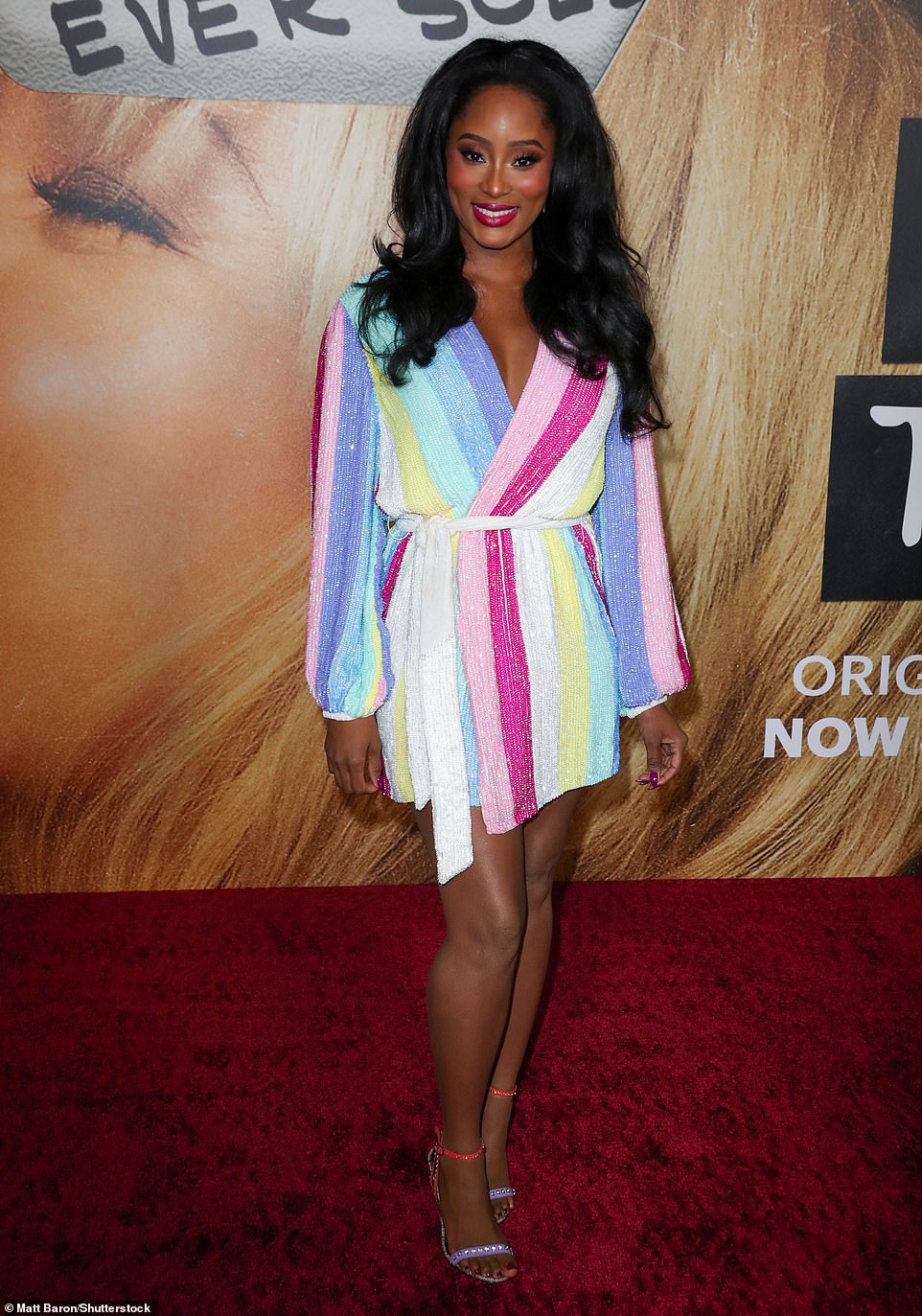 Lily spoke to Rolling Stone about the appeal of taking on the role, saying: ‘You come to understand how people think of you.

‘That’s very useful, what that fantasy idea of you is…I was ready for a transformational role, something I didn’t really think I could pull off.’

She added: ‘I felt the pressure of trying to do justice to this woman. What happened to her was so unprecedented and so wrong.’ 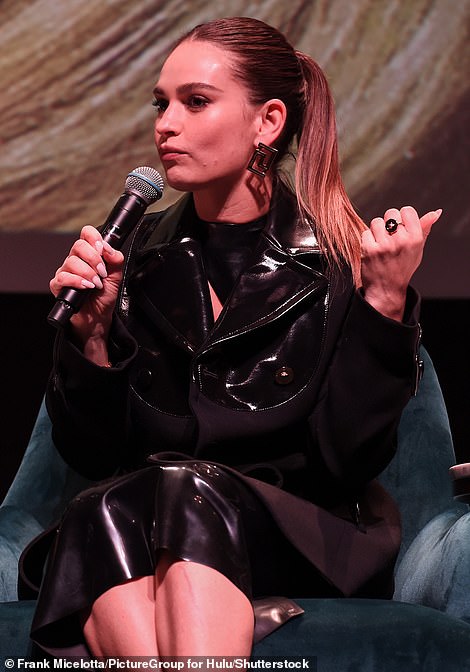 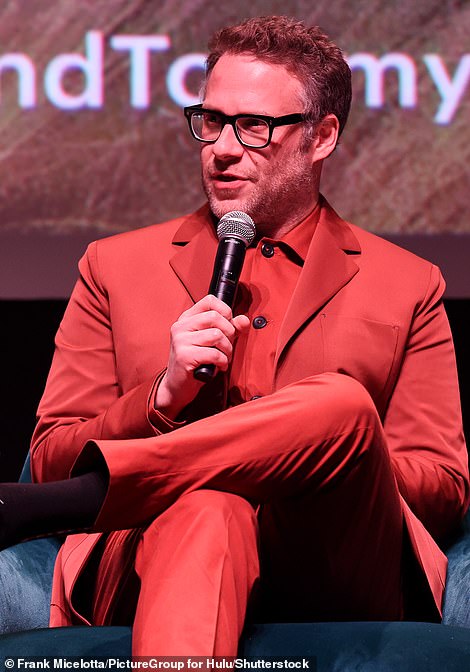 Farewell: Lily and Seth discussed their involvement with the show during their appearance at the FYC Event ahead of its final episode 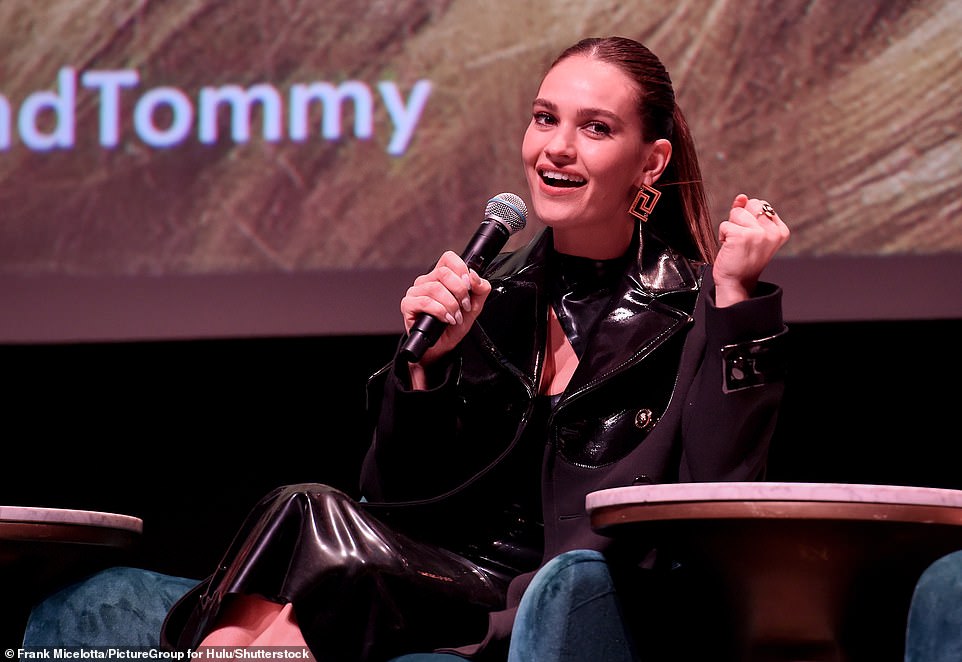 Hard to miss: As always Lily looked stunning as she discussed her role as former Baywatch star Pamela Anderson

She said: ‘A lot of people don’t know the true story of what happened. And within that, the bigger themes of privacy and sexism and exploitation into the birth of the internet.

‘It sort of simultaneously collided with this huge change in the world — the point of no return — and impacted the kind of culture we have today.’ 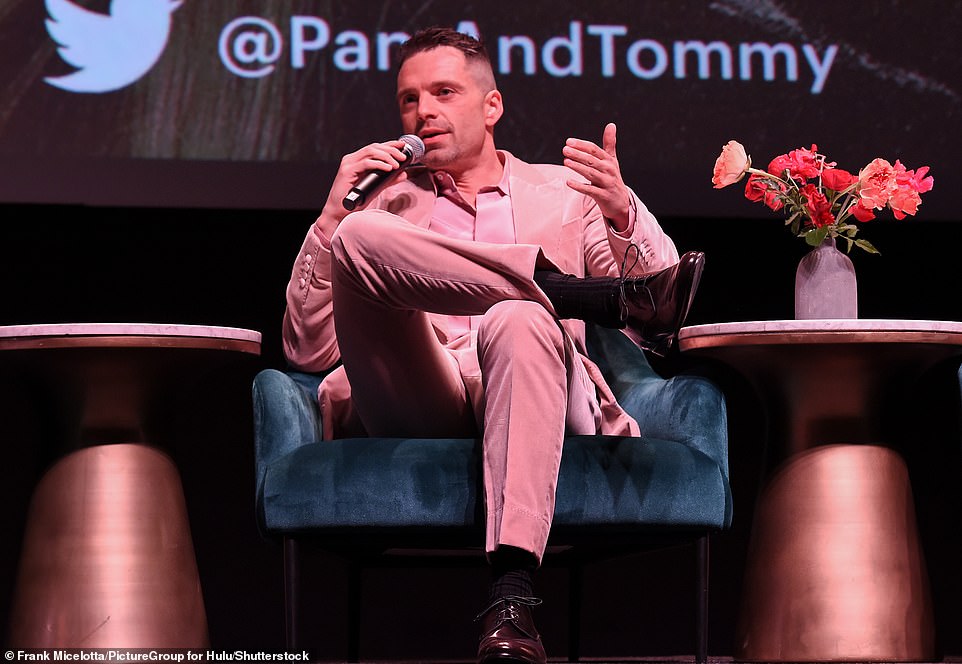 Getting involved: Sebastian plays troubled rocker Tommy Lee in the racy series, which documents his turbulent marriage to Pamela Anderson 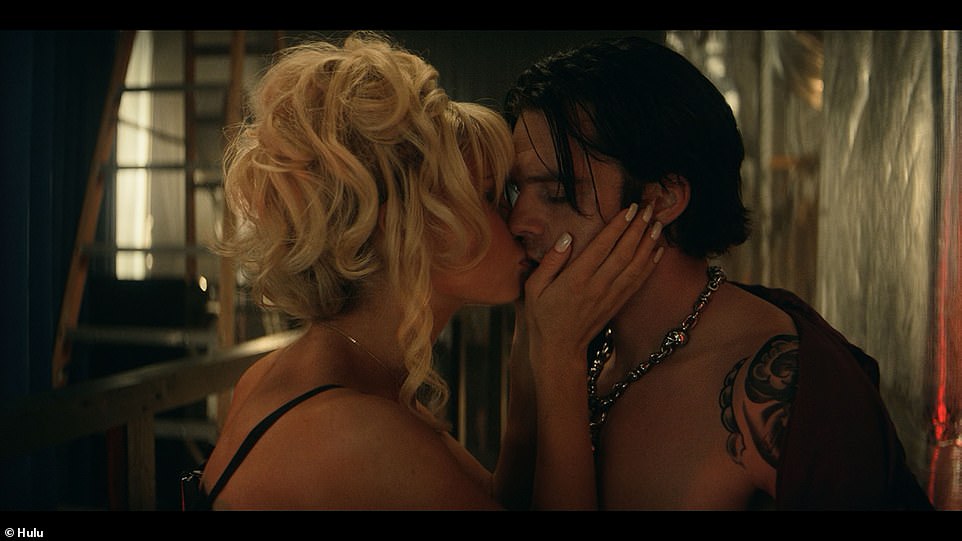 Dramatic: The season finale will air on Hulu on March 9, wrapping up the dramatic story which saw Pam and Tommy’s sex tape stolen from their private safe and distributed to the public by disgruntled former employee Rande 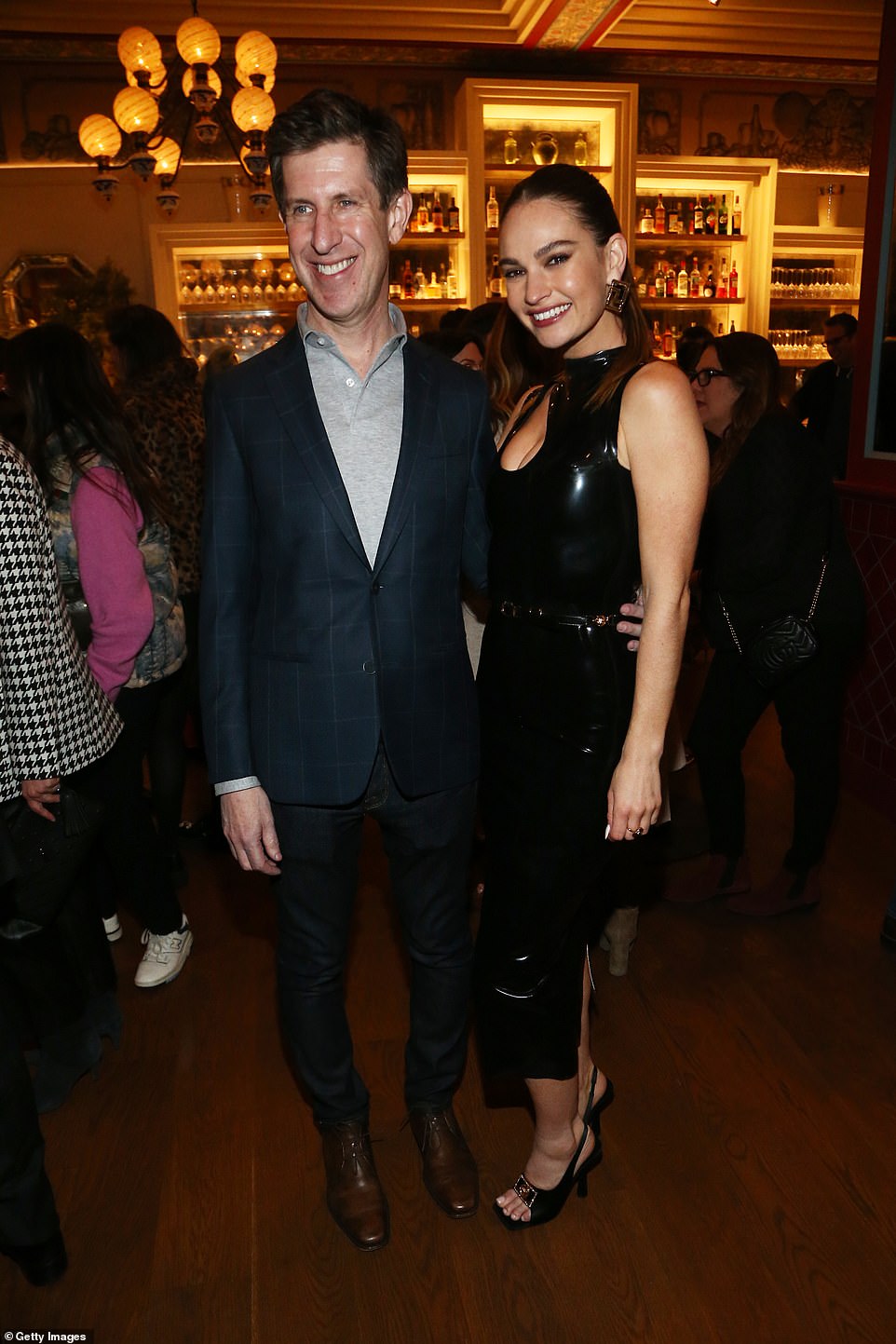 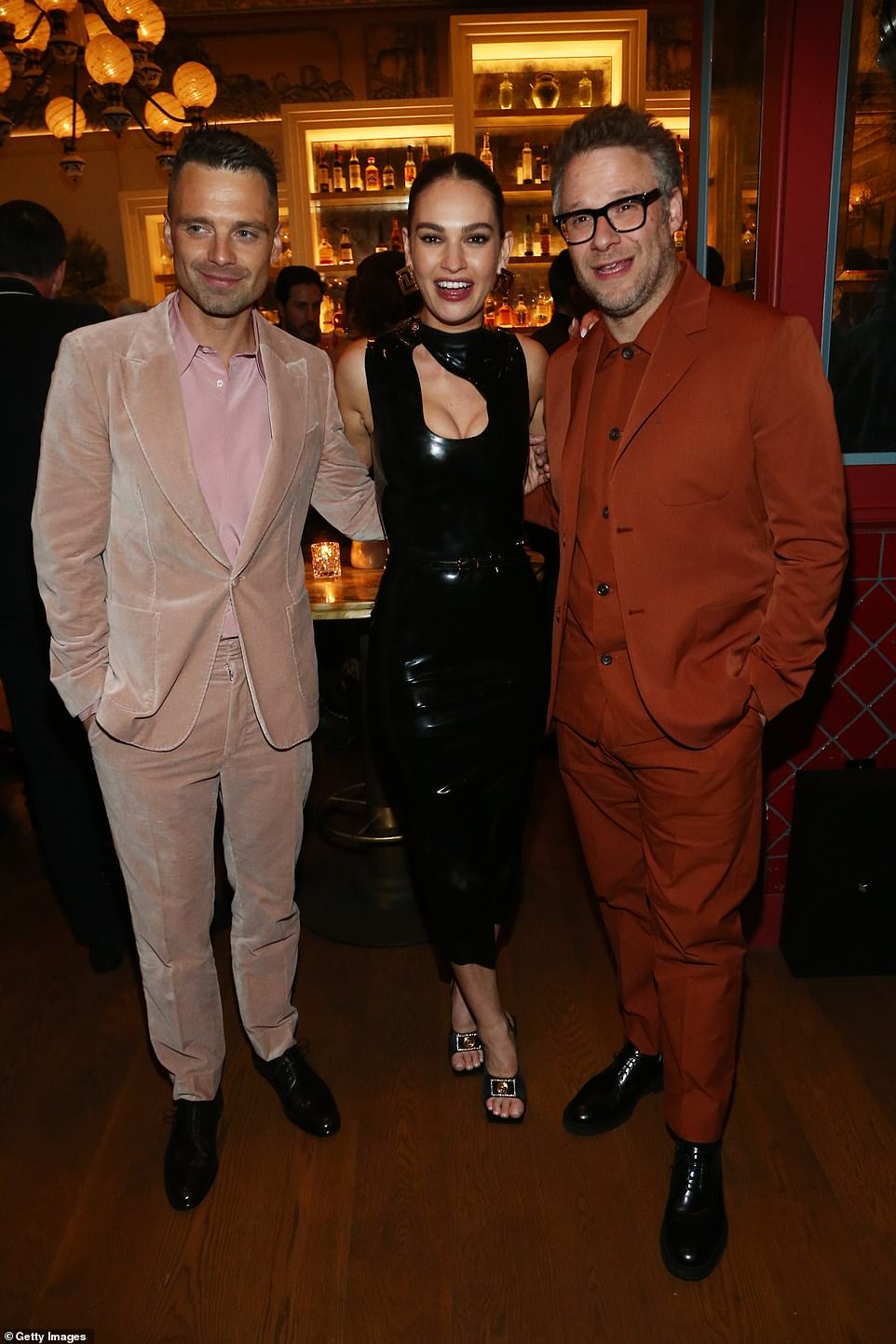 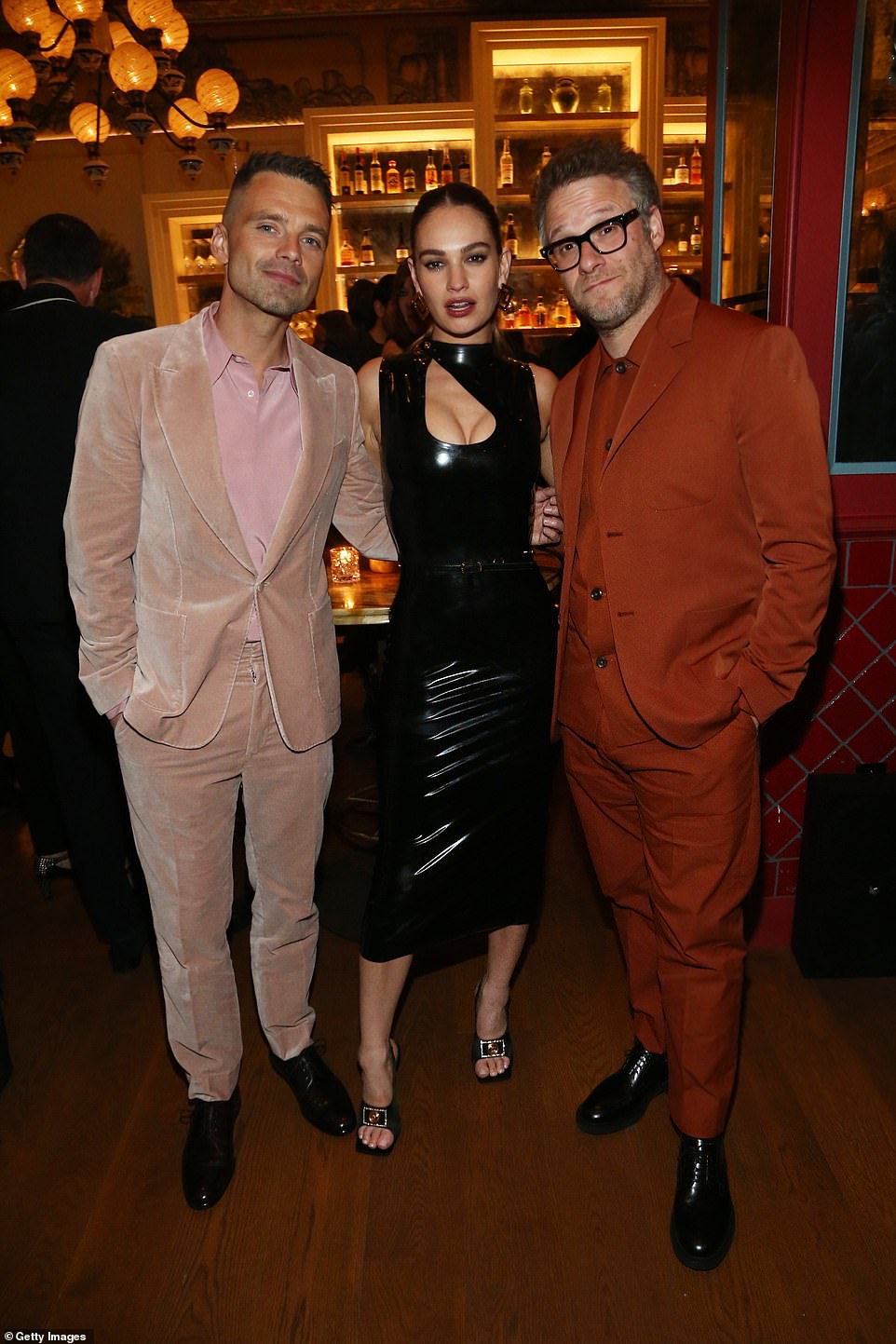 Lily’s look: James changed into a tight black dress with a cutout with her hair pulled back for the event 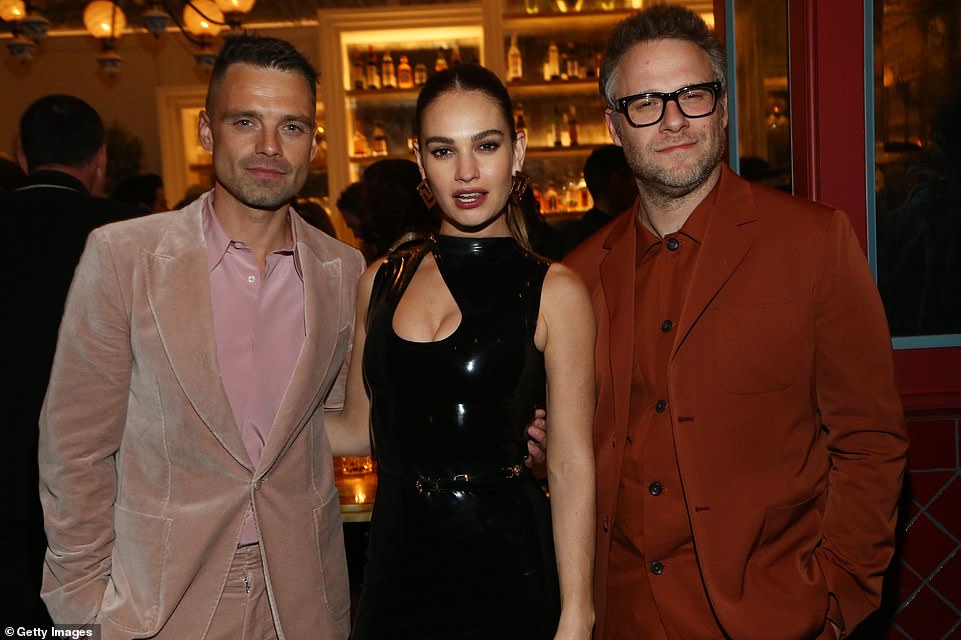 Earrings: She accessorized with ornate and unique earrings and completed her look with black heels