Kris Jenner, mother of the bride! The star models a leopard print dress from Dolce & Gabbana while in Portofino before Kourtney’s wedding to Travis Barker

Kris Jenner was a youthful mother of the bride in a glamorous new Instagram album she posted from Italy on Friday.

The 66-year-old has been seen in a leopard print Dolce & Gabbana’s Portofino dressa ahead of her firstborn child Kourtney Kardashian’s wedding to Travis Barker which will reportedly take place this weekend. 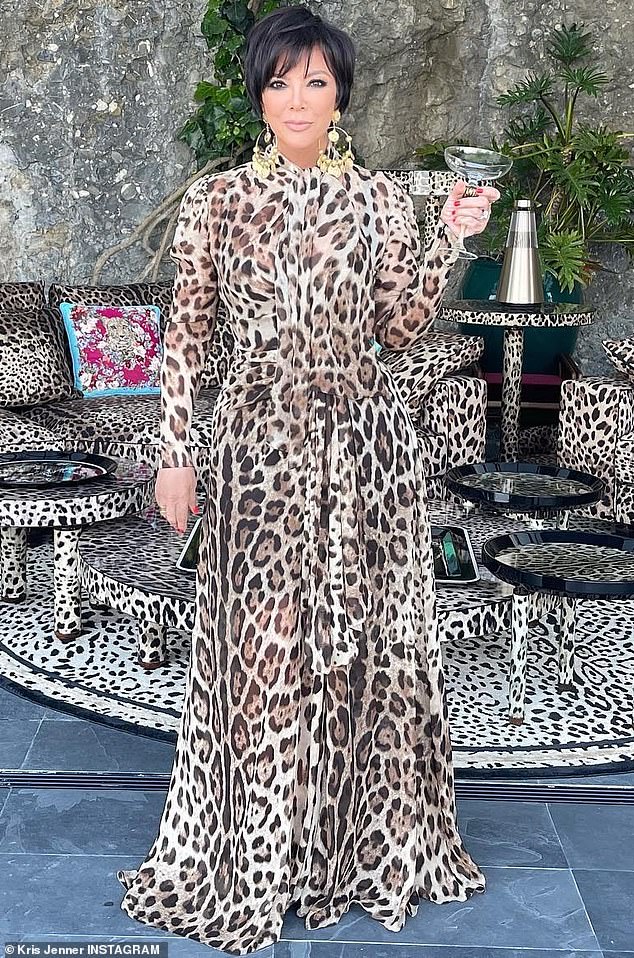 Glowing: Kris Jenner was a youthful mother of the bride in a glamorous new Instagram album she posted from Italy on Friday

The slightly sheer ensemble was cinched in around her enviably trim waistline, and she complemented it with dazzling gold hoop earrings.

Kris, with her makeup done by Ash K Holm and her hair by Andrew Fitzsimons, posed languorously on a leopard-print sofa that matched her frock.

‘Leopard is my neutral,’ she wrote in the caption of the pictures, which showed her surrounded by leopard-print furniture.

Kris recently told People she is ‘sworn to secrecy’ about Kourtney’s nuptials. ‘If I say one thing about a wedding, I am gonna be in so much trouble!’ 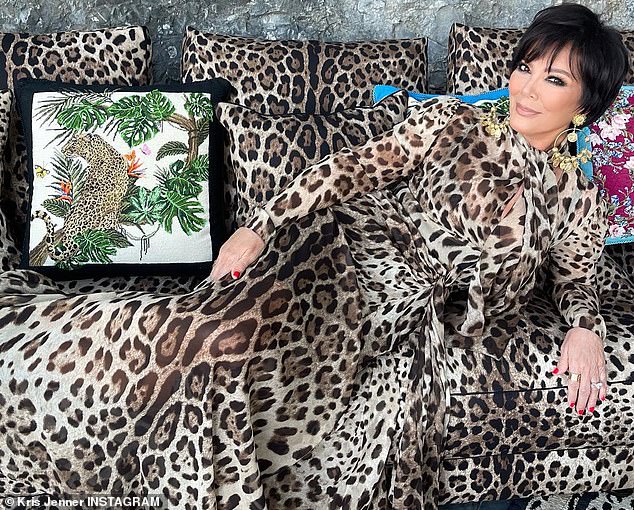 Living it up: Kris, with her makeup done by Ash K Holm and her hair by Andrew Fitzsimons, posed languorously on a leopard-print sofa that matched her frock 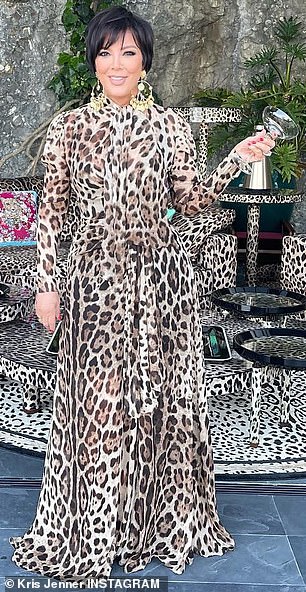 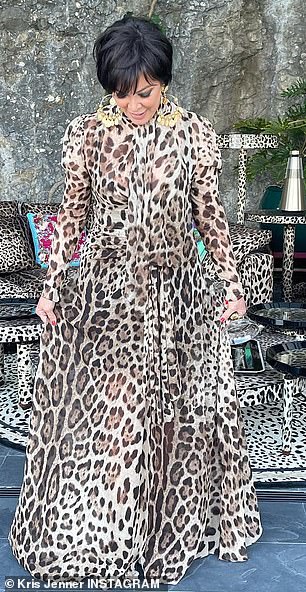 Terrific: In her latest pictures, Kris unleashed her animal instinct in a fluttering leopard print gown by Dolce And Gabbana and festively raised an empty cocktail glass

About a month ago, Kourtney had a drunken Las Vegas wedding with Travis Barker, who shot to fame as the drummer for Blink-182.

After attending the Grammy Awards in Sin City together, the pair headed to a wedding chapel and exchanged vows in front of an Elvis impersonator.

However the ceremony was not legally binding as the couple neglected to obtain a marriage license beforehand, so further steps were necessary.

They sorted their civil marriage at a Santa Barbara courthouse this past Sunday and are now thought to be planning a sumptuous wedding this weekend in Portofino. 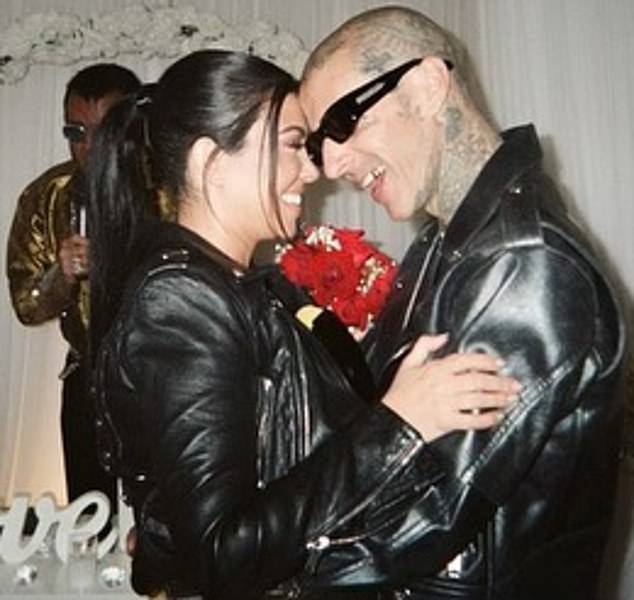 Look of love: Her daughter Kourtney Kardashian had a drunken Las Vegas wedding to Travis Barker last month but it was legally non-binding

The couple are reportedly planning to tie the knot at Castello Brown, a historic house museum located on a hill overlooking the harbor.

Kourtney was spotted Friday enjoying a romantic boat ride in Portofino with Travis, who was wearing a t-shirt that had his face on it.

Kris was seen the same day wearing a 1980s chic maxi dress as she indulged in a shopping trip through the streets of the picturesque fishing village. 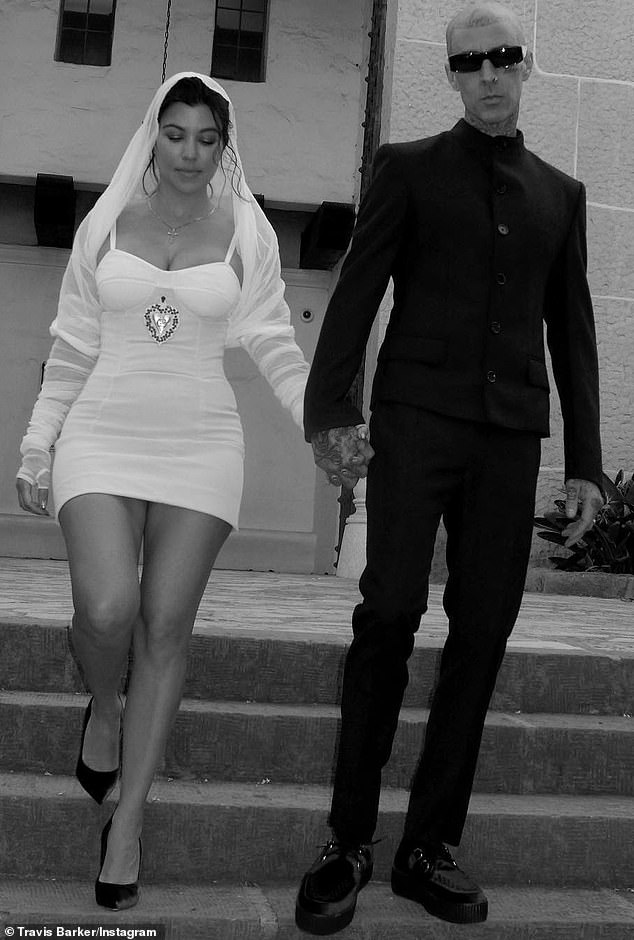 Making it official: They sorted their civil marriage at a Santa Barbara courthouse this past Sunday (pictured) and are now thought to be planning a wedding this weekend in Italy 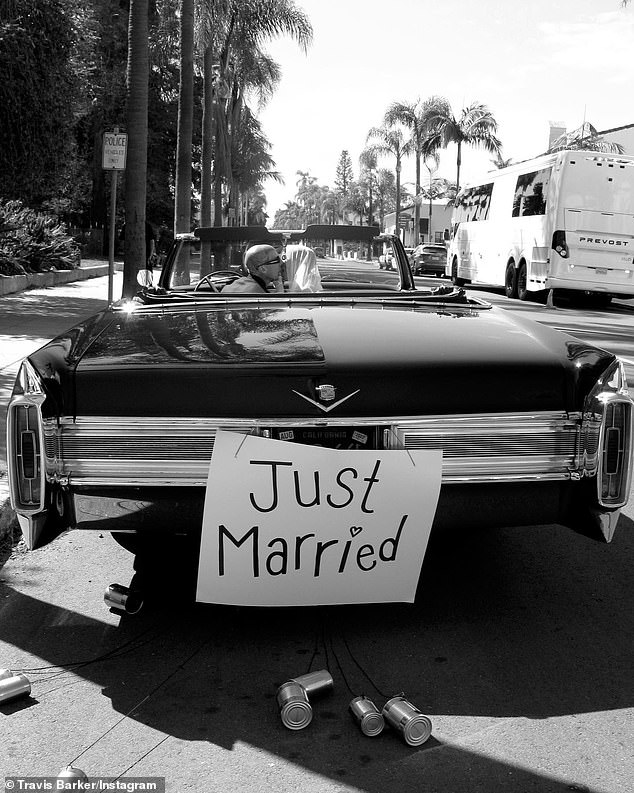 Just married: Travis treated his Instagram following to a photo album and him and Kourtney celebrating after getting legally married in Santa Barbara